An Indian couple rushed to three hospitals in six hours after their first son was born with a rare condition which makes his skin look like plastic.

The newborn boy was taken to a hospital 100 miles from his home village in the north of India when doctors realised he needed urgent medical attention.

The baby, who has not yet been named, suffers from Lamellar ichthyosis which means he has tight, waxy, plastic-like skin.

Parents Anita Devi, 23, and Alakhram Yadav, 25, rushed their baby to a doctor just a couple of hours after delivering him at home when they realised his skin looked abnormal and he was struggling to breathe.

They were eventually sent to a private hospital in Lucknow, about 300 miles south-east of New Delhi, where doctors treated the baby for free.

An expert said the skin condition is ‘extremely rare’ and the baby was put on life support but his parents have been told he has a good chance of survival.

The baby, which has not yet been named, was born with a condition called lamellar ichthyosis, which makes the skin tight, shiny and plastic-looking 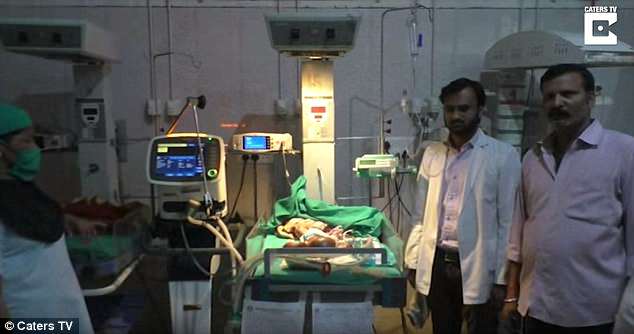 After rushing to a community centre then a local doctor, the baby’s father Alakhram Yadav, took him to a hospital 100 miles from their home

The family are from a village called Binhoni Kalan in Balrampur, a district in the Indian state of Uttar Pradesh, near the border with Nepal.

Ms Devi gave birth to the couple’s first child last Thursday, May 24, in a normal delivery at home, but they soon realised something was wrong.

Mr Yadav, who works as a farmer, said: ‘Within couple of hours after the delivery we found the baby was different from normal babies. His skin was waxy and shiny, resembling plastic.

‘Also, he was having breathing problems as well.’

Referred to a hospital 100 miles from home

He immediately rushed his son to a nearby community centre, where doctors told him to go to an advanced medical centre because the baby’s condition was critical.

They were finally referred to a private hospital in Lucknow, over 100 miles from their home, where doctors admitted him and offered free treatment.

There he was diagnosed with a condition called collodion membrane, in which babies are born with tight, waxy and shiny skin resembling plastic wrap.

Rare condition affecting one in 600,000 people

The condition, according to doctors, is caused by a rare inherited genetic disorder called lamellar ichthyosis that affects one in 600,000 people.

Babies born with the permanent condition may have a tight, plastic-looking membrane on their skin, which will then peel off. 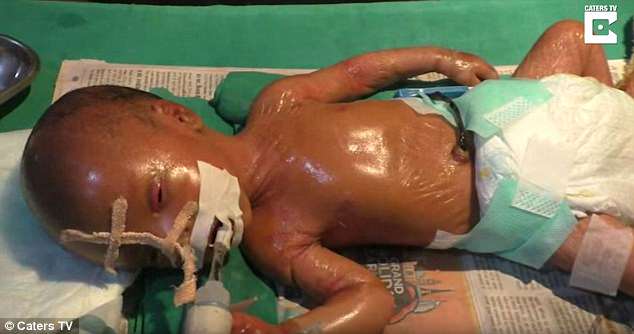 In later life lamellar ichthyosis is associated with excessive skin shedding, and it is usually inherited from parents who do not have the condition but carry the gene.

It is not a contagious condition but there is no cure, and complications can include hair loss, difficulty bending fingers, overheating, tight skin cutting off circulation, and eye problems.

‘Within six hours hours, I visited at least three hospitals with my baby as doctors kept me referring to other hospitals saying they can’t help him as he was a rare case,’ Mr Yadav added, 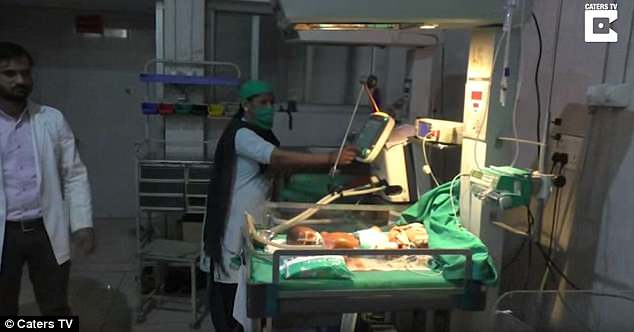 A medic said this was the first case he had seen of the ‘extremely rare’ condition, but the baby was put on life support and has a ‘good chance’ of surviving

‘The baby has been kept on life support system. He is improving now and his survival chances are quite good.’

‘The condition is extremely rare. In my nine years of medical career, this is the first case of collodion baby I’ve come across.

‘This is a permanent skin condition which is very painful.

‘Parents of such babies need to be very careful as they are very prone to infections and to diseases particularly to water and airborne diseases.’

WHAT IS LAMELLAR ICHTHYOSIS?

Lamellar ichthyosis is a very rare skin condition that is characterised by abnormal scaling and shedding of the skin.

It is believed to occur in one in every 600,000 people and symptoms usually appear within the first few days of life.

The condition is caused by genetic abnormalities that affect the shedding of skin.

It occurs when both of a person’s parents carry the abnormal gene – in this situation, there is a one in four chance of the person developing the condition.

Lamellar ichthyosis can also cause overheating as it prevents sweating, and can constrict the blood flow to the fingers and toes as it causes the skin tighten.

It can also cause eye problems, hair loss, and difficulty bending the hand joints.

There is currently no cure and the key treatment is regularly applying moisturiser.