This is the terrifying moment a group of women scale the inside of a huge dried-up well to collect a small bucket of water.

In a display of sheer courage, one determined lady performs a ‘tightrope-style’ walk around the rim of the well before climbing down into it on near-invisible steps.

The footage was taken in a village in the Nashik District of western India.

The area is believed to have been experiencing problems from drought on-and-off for three years.

Out of desperation for clean drinking water, women are having to make the hazardous descent as the water source dries up further.

After making it down much of the way of tiny metal steps, the women in the video then has to navigate the outcrops of rock in order to get close enough to lower her cannister down.

As other women’s cannisters clang down the sides of the well, it creates a weird drum-roll noise that matches the precarious situation the women finds herself in.

She makes the last part of the journey by holding onto a thin rope held from above, safely reaching the wet floor of the well.

Having made it down without an accident, other women begin to make the scary climb, abseiling on thin ropes as empty plastic bottles hurtle down to the water next to them. 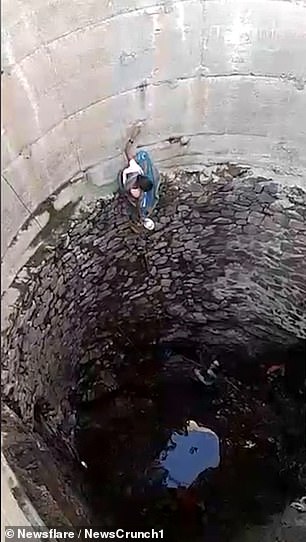 The women begins to collect water from the clearly depleted water source. The area is believed to have suffered droughts on-and-off for three years

Bhagwan Madhe, an activist with a local non-profit organisation ‘Shramajeevi Sanghathana,’ shot the video of the women making the climb in Badewadi village on April 20.

Madhe said the region has been experiencing severe water problems for the last three years and that government officials have failed to address the crisis.

‘Most women are risking their lives to get water and luckily no accident has taken place so far,’ he added.

With many parts of India are reeling from a severe drought, women in rural villages are risking their lives to fetch water for their families.

Water sources have virtually dried up in 25 villages of Trimbakeshwar Taluka in Nashik District of western India, so many women are forced to make the treacherous descent down the walls to draw water at the bottom.

If Jack and Jill thought getting up the hill was hard, then this is a completely different task.