Infant mortality rates up for the THIRD year in a row

Infant mortality rates have risen for the third year in a row, official new figures reveal.

Government data shows 2,651 babies died across England and Wales in 2016 – up from the totals recorded in the previous two years.

Death rates of children under 12 months had been on a steady decline since records began three decades ago – until 2014.

But since Office for National Statistics released that annual report four years ago, the worrying trend has risen year-on-year.

Statisticians today explained the new figures, which show 1,905 of the deaths were neonatal, remain low ‘in historical terms’.

Government data shows 2,651 babies died across England and Wales in 2016 – up from the totals recorded in the previous two years

They suggested that the small increases in deaths since 2014 can be blamed on rising rates of immigration.

The figures showed 804 of the deaths, roughly a third, occurred in children born to mothers from outside the UK.

However, a similar fraction of the 696,271 births across England and Wales in 2016 were attributed to foreign mothers.

The soaring rate of older mothers, which has trebled in the last 30 years, was also deemed partly responsible.

Child death rate – considered by Unicef to be a barometer of children’s health within any given country – is higher in the UK than in many other European countries.

A breakdown of all of the births across England and Wales in 2016 revealed a stark divide across different regions.

Parents in some parts of the country face double the risk of losing their child before they turn one, the data showed.

Six in every 1,000 infants won’t survive until their first birthday in the West Midlands – compared to just three in Wales.

Rates are similarly low in the East of England (3.1) and Inner London (3.1). The average across the two countries is 3.8. 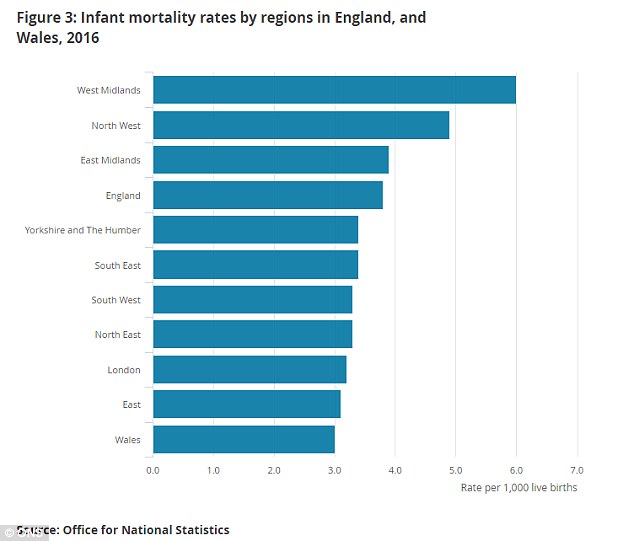 Infant mortality rates have plummeted 66 per cent since the first annual ONS report was released back in 1986.

Some 7,899 infants died in the first year of tracking the deaths of children under 12 months across England and Wales.

HOW MANY CHILDREN PER 1,000 DIE BEFORE THEY TURN ONE IN EACH REGION OF ENGLAND AND WALES?

YORKSHIRE AND THE HUMBER: 3.4

However, in the past 20 years such steep declines haven’t been noted as rates have dropped by less than a third.

The ONS figures also showed death rates for children aged between one and four, and between 10 and 14, have spiked for the third year in a row.

Cancer remains the most common killer in children under the age of 15 as figures revealed the disease accounted for 20.6 per cent of deaths.

ONS statistician Vasita Patel said: ‘In 2016, there were small increases in both the infant and neonatal mortality rates in England and Wales from 2015 but these rates remain low in historical terms.

‘These increases can be attributed to many risk factors, such as the mother’s country of birth, mother’s age at birth of child, birthweight and the parents’ socioeconomic status.’

Francine Bates, chief executive of The Lullaby Trust charity, said: ‘The Lullaby Trust is concerned to see that there has been little change in the infant mortality rate since last year and that babies from disadvantaged families are more likely to die.

‘These statistics show us that the measures taken to tackle inequality have stalled.

‘Many of these deaths could be prevented if the Government were to invest more in maternal and children’s health.’