I’d once read that a tour company advised its customers to run from taxis into their hotels in Johannesburg, to avoid being robbed.

The city has always had crime problems and drastic issues with wealth disparity, and still does. But many areas have been impressively regenerated with one, Maboneng, I discover, feeling a little like London’s Shoreditch or Manchester’s Northern Quarter, with bars in shipping containers and a population of artists, architects, hipsters, entrepreneurs and models. It even has its own shuttlebus.

The precinct also harbours world-class restaurants, such as the excellent Marble, which is prone to decanting top-notch pinot noir.

Johannesburg has always had crime problems and drastic issues with wealth disparity, and still does. But many areas have been impressively regenerated 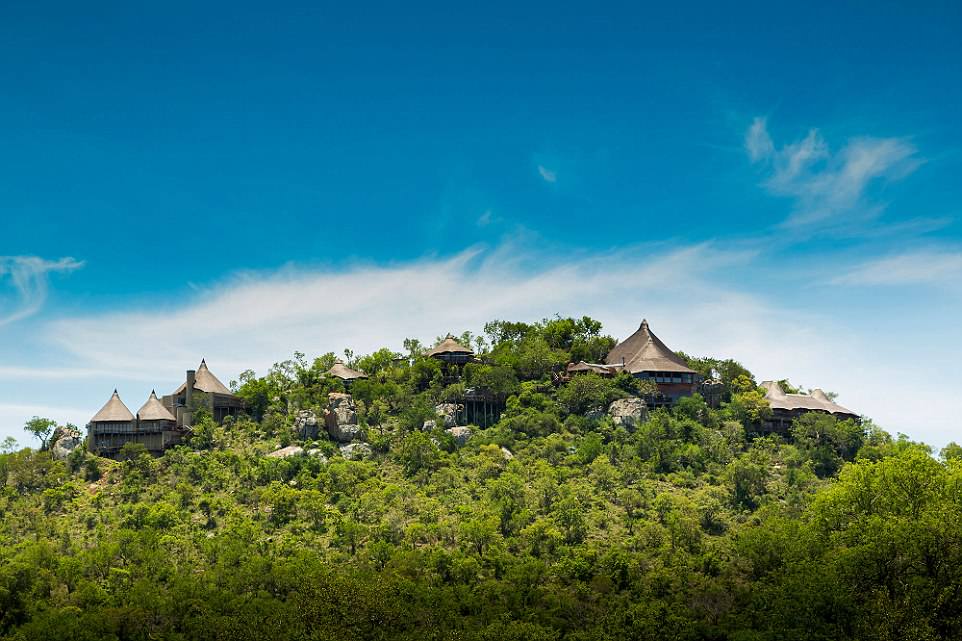 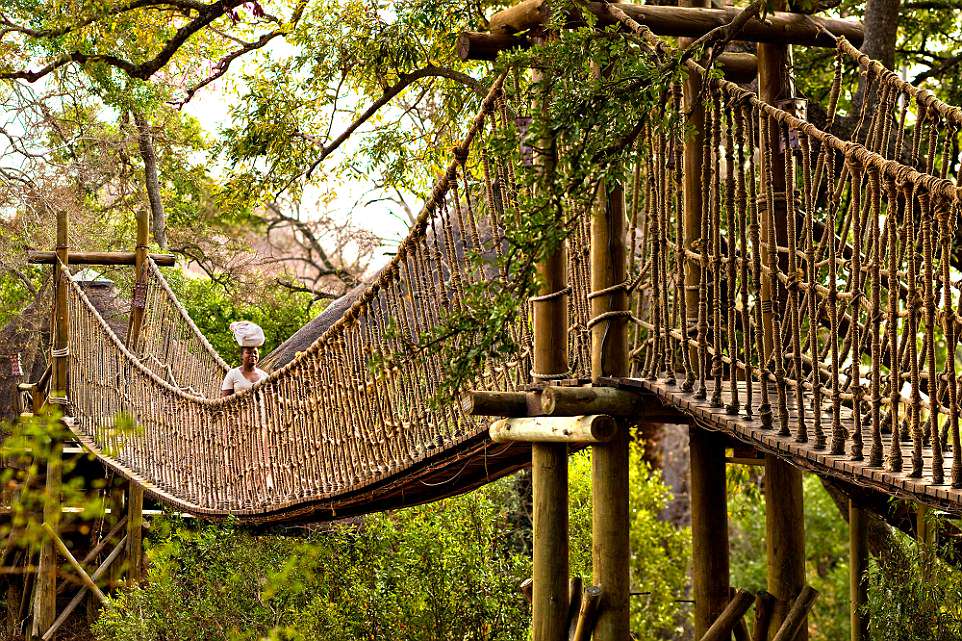 I’d been ready for an urban safari, but it’s almost an urbane safari.

Of course, one of the prime reasons for jetting into Johannesburg is its proximity to safari destinations of the truly wild type.

And it’s one of these that’s my first port of call in South Africa, at Sir Richard Branson’s private game reserve, no less – Ulusaba, on the Sabi Sand Reserve.

Reaching it promises to be a memorable experience in its own right.

Virgin Atlantic deposit me at Johannesburg airport following a dreamy upper-class trip on a Dreamliner (see boxout), where it’s a short and sweet transfer to a Federal Air terminal for a propeller-powered flight to the lodge’s airstrip about one hour north-west of Johannesburg.

The dream continues, with two foxy female pilots launching our tiny plane towards the 65,000-hectare reserve, which borders the Kruger National Park.

The dream disintegrates about 45 minutes in, though. The cloud-cover is too low for a safe landing so we divert to another air strip and transfer by road to the lodge.

Disappointing, but on the plus side, the safari starts immediately, because we spot a monkey at the terminal and giraffes and zebras by the roadside as we hurtle to Sir Branson’s luxury digs. 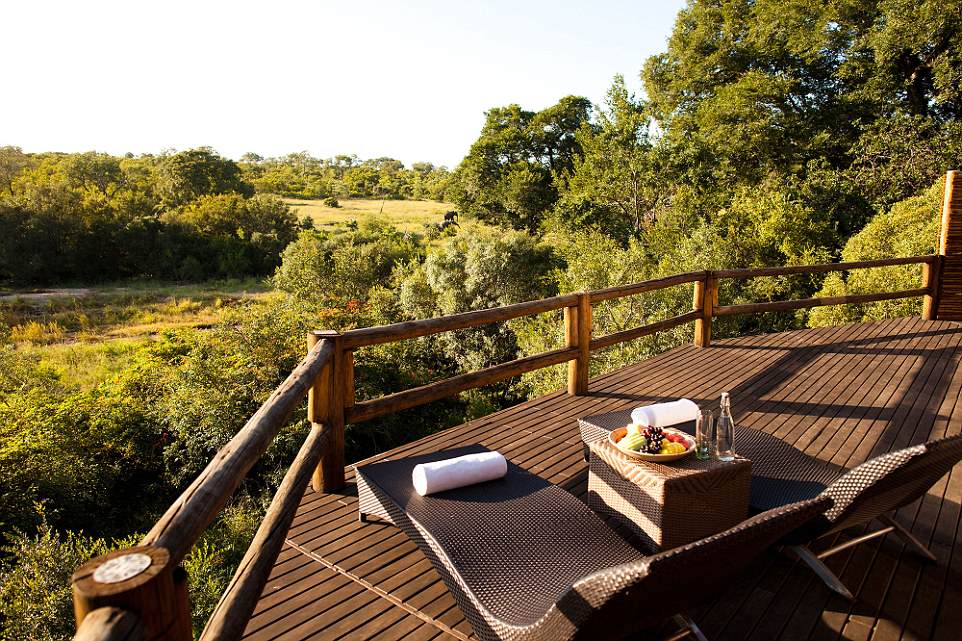 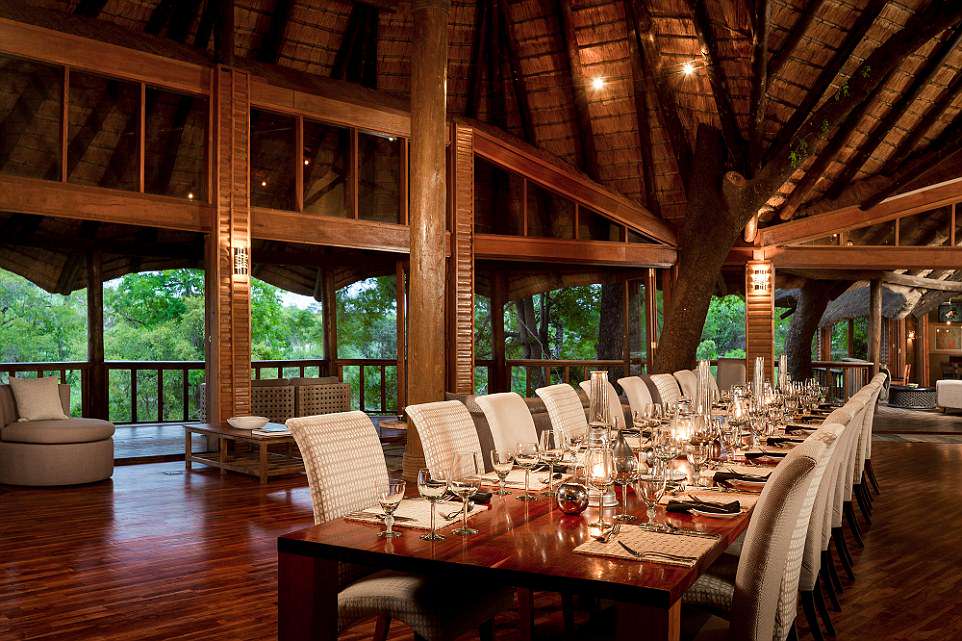 There are boutique-ier, more Out of Africa-ier, safari lodges out there, but Ulusaba has a considerable amount going for it. Pictured is the dining room at the Safari Lodge

I’m in the former in a huge, well-appointed ‘River Suite’ room – with rain shower, standalone bathtub and a bed big enough for a buffalo – and I have to say, the set-up is pretty stupendous.

There are boutique-ier, more Out of Africa-ier, safari lodges out there, but Ulusaba has a considerable amount going for it.

All the rooms and the main lodge are cunningly positioned in and around a dry river that elephants use as a highway to a watering hole – where hippos and crocodiles dwell.

Out at this watering hole is Safari Lodge’s top room – the Treehouse Suite. But here there’s also a public viewing deck (and champagne-filled mini bar), and to reach it you have to stroll along an 800-metre-long elevated wooden walk-way. 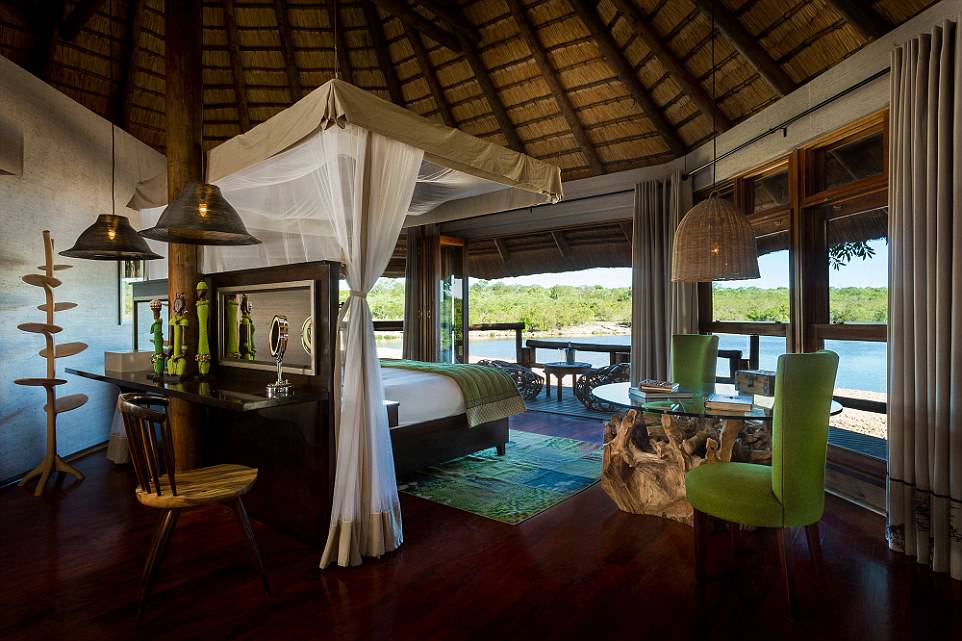 Safari Lodge’s top room is this one – the Treehouse Suite. It faces a huge watering hole where hippos and crocodiles lurk 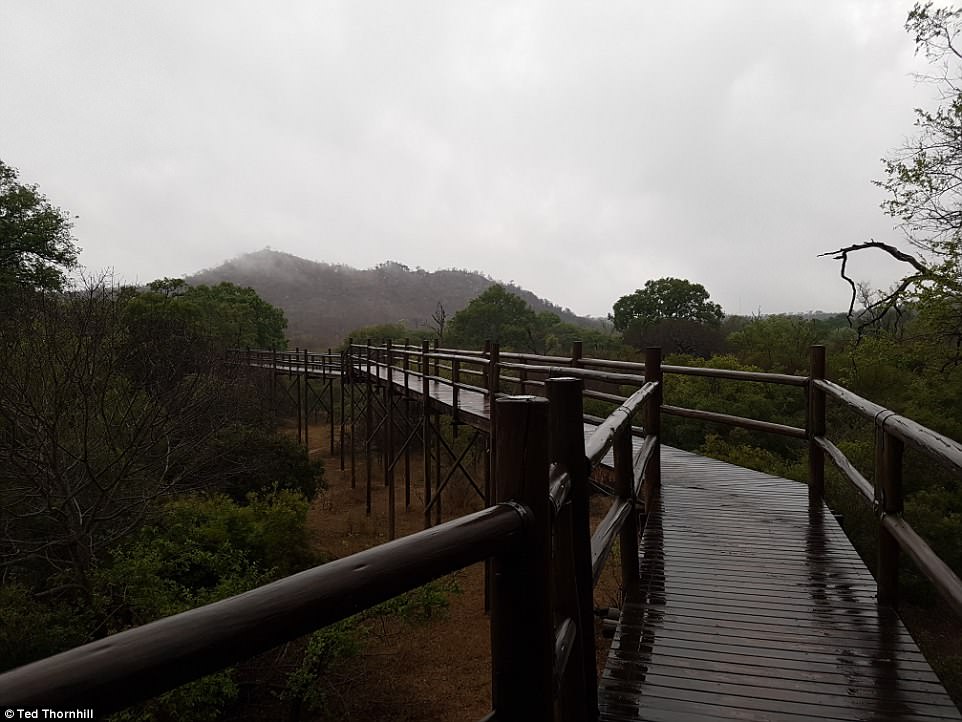 The walkway to the Treehouse Suite and viewing deck is 800 metres long and makes for a thrilling experience. Ted took this picture on it one morning at 5am 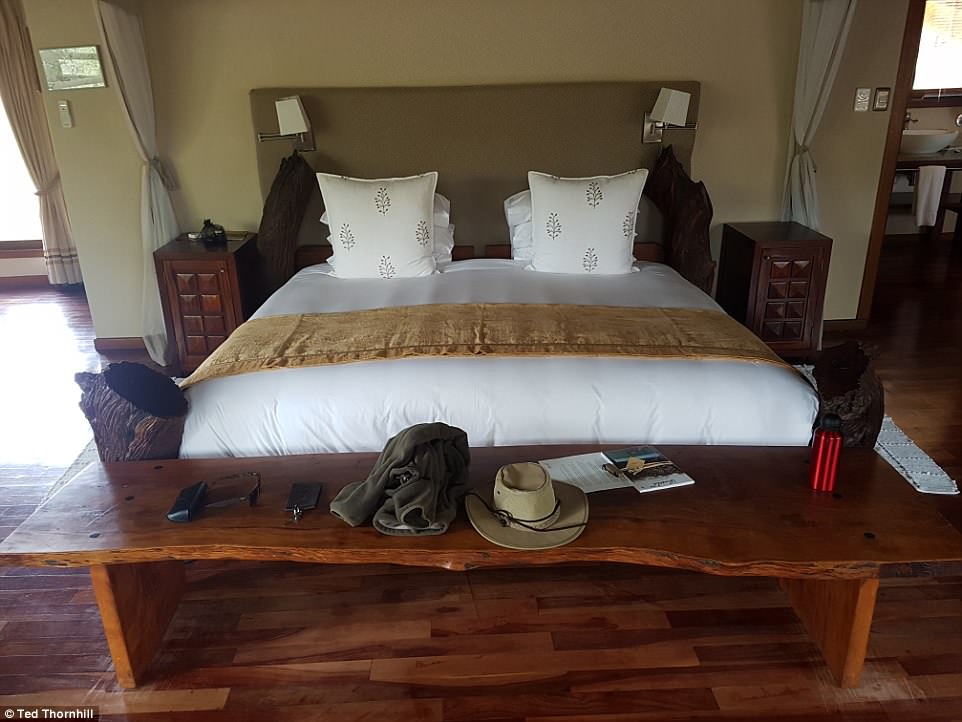 Leopards have been spotted mating under this, I’m told.

I stroll along it at 5am one morning before a game drive. I don’t witness any wildlife, mating or otherwise – apart from a beetle on one of the planks – but just the anticipation of seeing something makes it a thrilling endeavour.

But not as thrilling as the game drives.

Here Ulusaba truly hits the mark, thanks not only to the large numbers of big-ticket beasts, but the knowledge, humour and enthusiasm of the experienced guides.

My group’s, Liam, mixes a child-like wonder at the creatures we encounter with superb skill at explaining what we’re looking at (and how it would kill us if we got out of the game drive car). 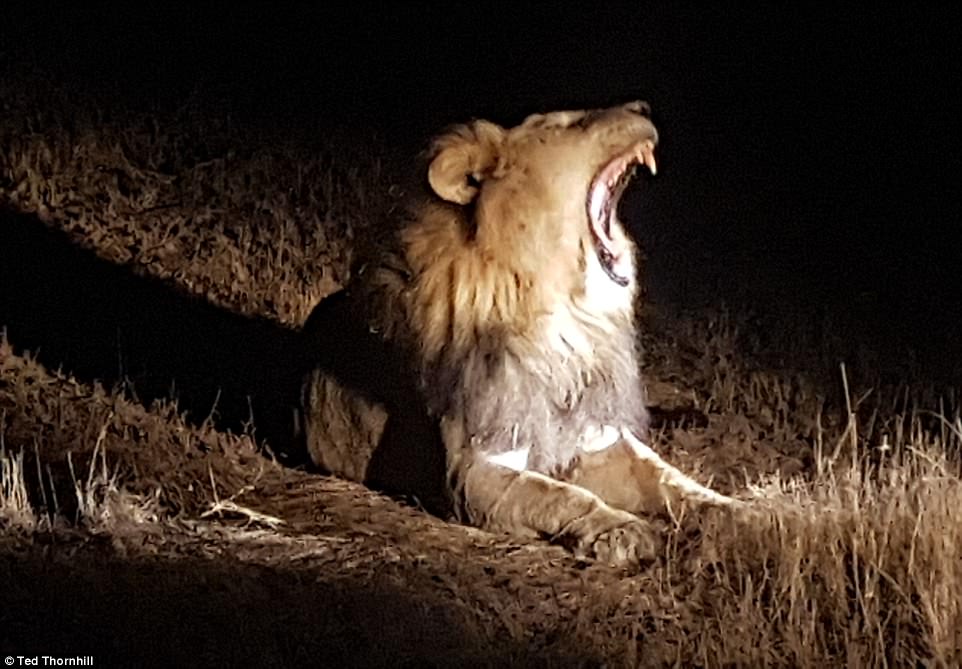 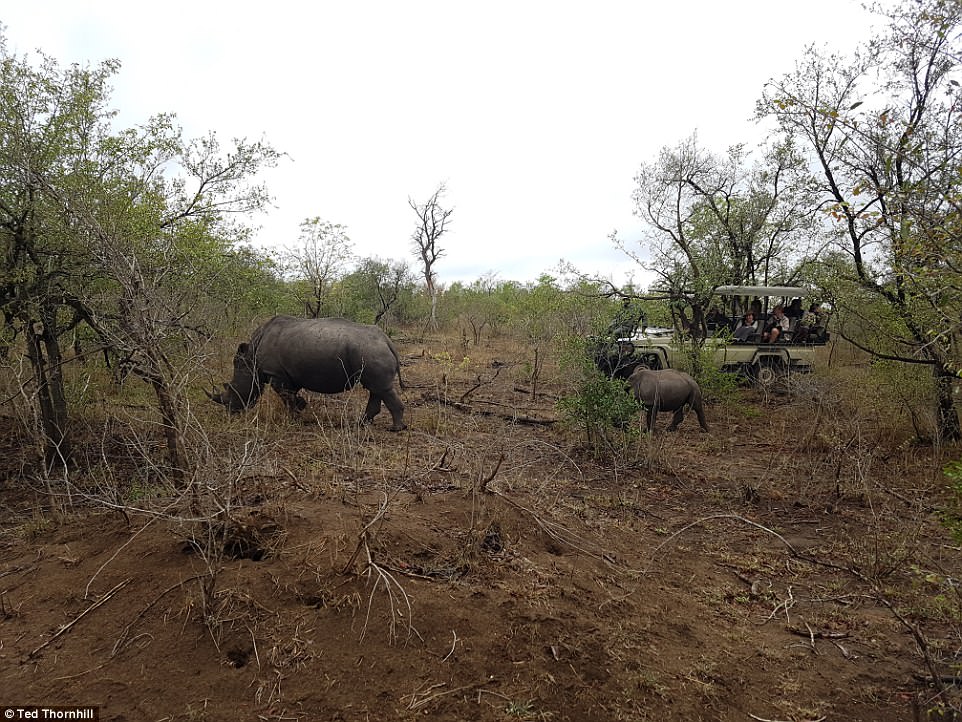 Awww-some: Seeing a baby rhino and its mum and dad was another great moment at Ulusaba 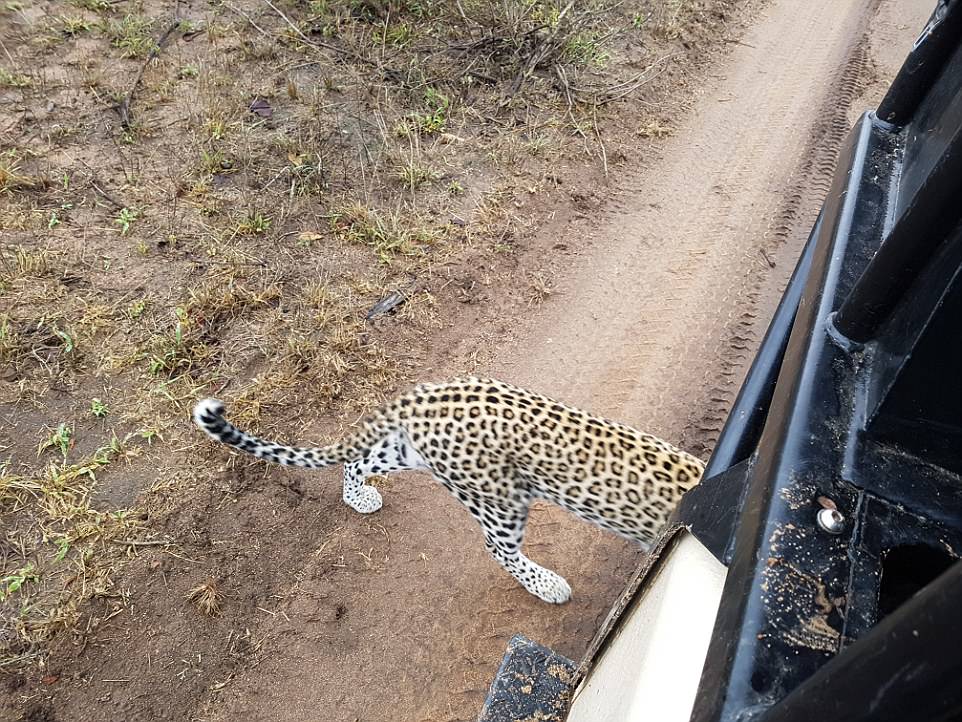 I go on four game drives in total and see a leopard each time (one even walks right under the Land Rover), witness a huge male lion roaring, hang out with a small herd of elephants as they forage, gaze upon a baby rhino wandering through a thicket with its mum and dad, pick out a convoy of hippos walking along at night with spotlights and watch two giant land snails mate in the middle of a track.

There are no scary moments, but on one drive we are told to stay very still while a cranky, hissing leopard calms down and a hyena comes within yards of a spectacular bush dinner the lodge organises.

It’s a huge wrench to leave.

My final night in South Africa is spent in surroundings that couldn’t be more different.

I stay at the African Pride Melrose Arch Hotel, in Johannesburg’s Melrose Square – a precinct that could be in any city anywhere.

And it has green lighting in the toilet, which I’m not certain I approve of.

Still, nightclub-style lighting zones aside, the bed is very comfortable.

In the evening I have a quite extraordinary dinner at Marble, featuring the tenderest beef cuts imaginable and wonderful wine. 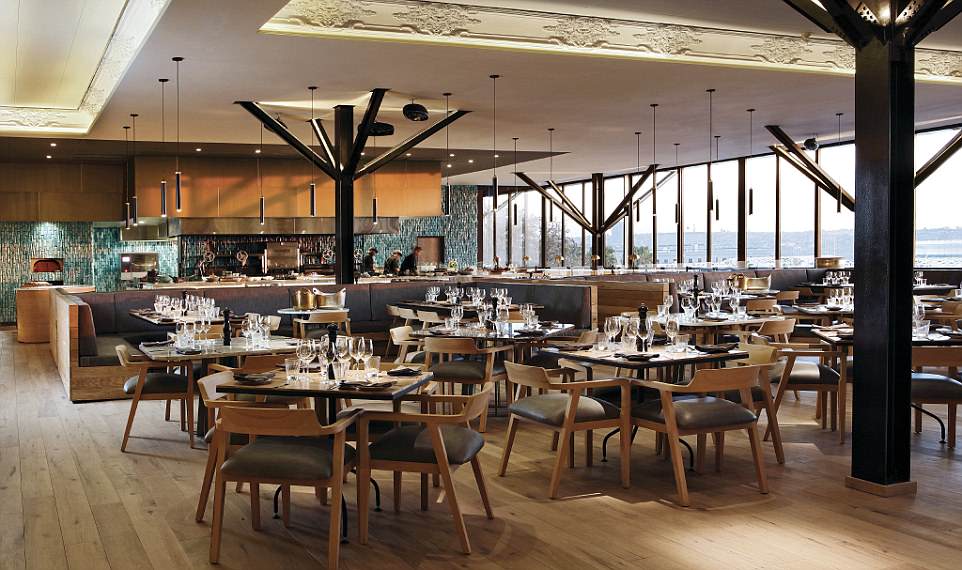 Hungry for a good place to eat in Johannesburg? Try Marble (pictured), where Ted has wonderful wine and the tenderest of beef cuts 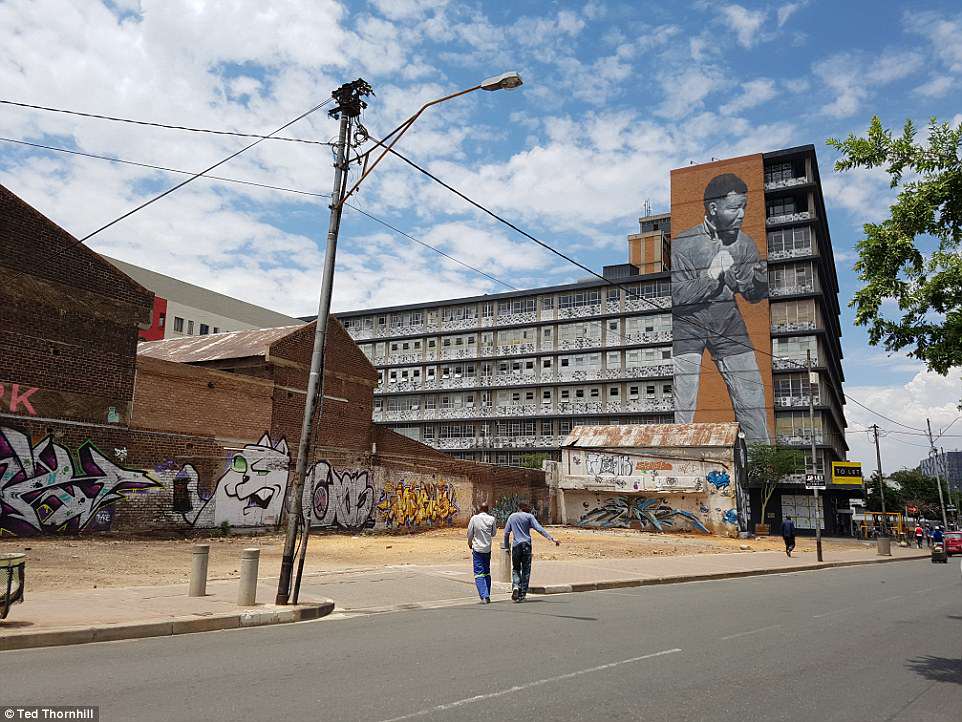 Ted is shown around the Maboneng Precinct by Bheki Dube, the ‘mayor of tourism’. Pictured is a gigantic mural of Nelson Mandela that he helped to commission

The following day I’m up bright and early to explore Maboneng and my eyes are opened wide by its energy and cultural vibrancy.

I’m shown its hotspots by the mayor of tourism in the Maboneng Precinct, 25-year-old Bheki Dube, who is also the founding director of Curiocity Hostels – ‘a disruptive African hostel movement’ with locations in Maboneng and Durban (and Cape Town opening in late 2018) – and tour company Mainstreetwalks.

Mr Dube has been extremely influential in the regeneration of the area, having helped to commission artists to paint murals there and encourage forward-thinking businesses to take root. 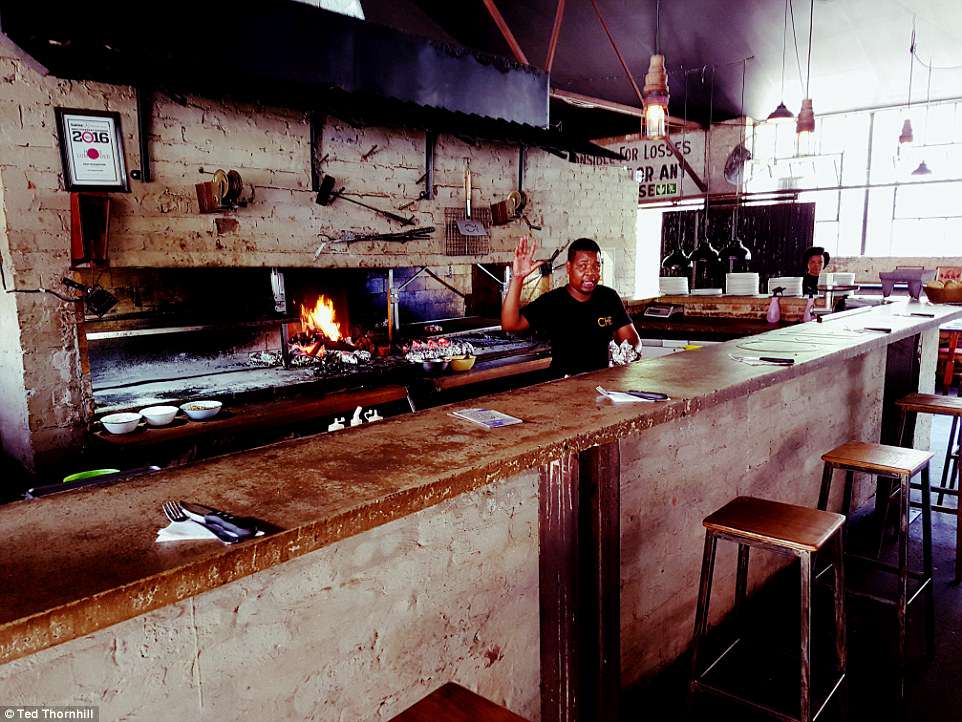 We take in a gigantic painting of Nelson Mandela, the uber-cool Marabi jazz club and pop into a work-space for rent that houses a crazy golf course.

Lunch is at a rustic Argentinian restaurant in Maboneng called Che – think the best steak sandwich you’ve had in years – and we say our goodbyes as a skateboarder zooms past.

Hip from start to finish.

Before my flight back to London there’s time for a visit to the Apartheid Museum, which offers a sobering reminder of the horrors that the nation has endured in its shockingly recent history.

I board the aircraft with my view of the country almost turned upside down.

As the plane drops violently in the turbulence I grab the side of my pod and my heart leaps.

I’m flying ‘upper class’ with Virgin Atlantic from Johannesburg to London on a Dreamliner. But turning left doesn’t mean that turbulence is turned off. It just means the quality of the drinks being spilled is much higher.

The jolt is so severe that the captain is motivated to apologise to those on board shortly afterwards. ‘Sorry about that ladies and gentlemen,’ he says smoothly. ‘We just caught the edge of a storm back there. I do apologise.’ 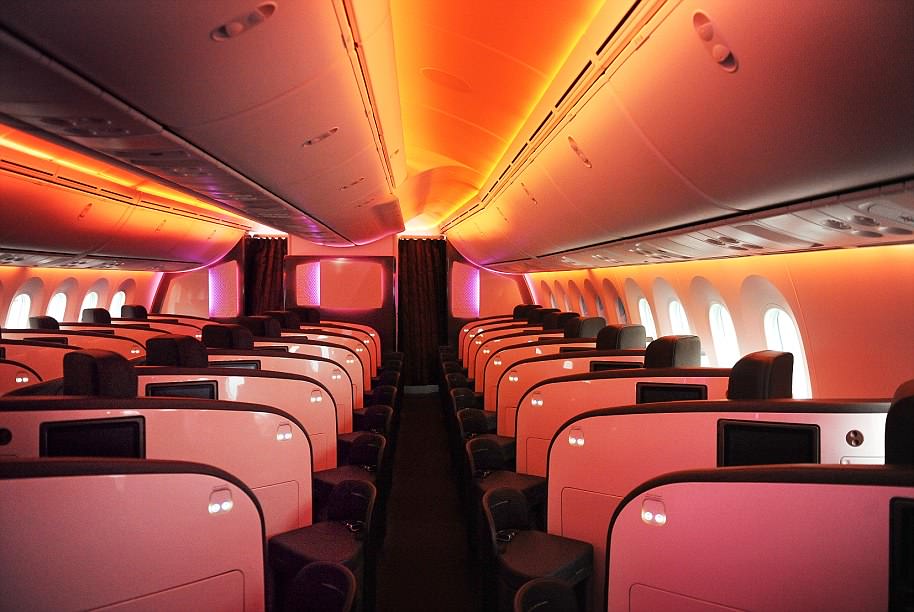 MailOnline’s Ted Thornhill flew upper class from London to Johannesburg and back. He liked it 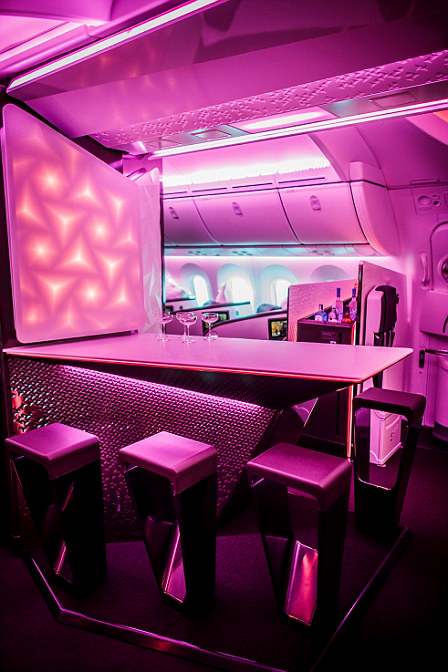 The bar is surely the piece de resistance of the upper class experience. Ted highly recommends gathering here for a few snifters with one’s travelling companions

My ‘espresso leather’ seat is one of 31 arranged in a 1-1-1 formation and is supremely comfortably with lots of support. Plus, it has a little footrest that doubles as a seat for a friend, which even has its own seatbelt.

I feel nicely cocooned with leather-trimmed arched dividers on either side preventing those next to me from spying which guilty-pleasure movie I’m watching (OK, fine, it’s Transformers!).

The screen is 11 inches across, which isn’t industry leading, but a definite step-up from an economy screen. It’s manoeuvrable, too – it can be tilted up and down and pushed back and forth with ease.

The seat is highly manoeuvrable as well, with buttons to my right that alter the recline angle.

Back I go while I lap up the Virgin Atlantic service.

The airline has a good reputation in this area and the crew on the trip out to Johannesburg and on this return leg don’t disappoint – they’re friendly, chatty, upbeat and efficient (it takes a matter of seconds to be offered champagne upon boarding).

And the fodder and food they bring to my seat is pretty gourmet.

On the way out I tuck into a tender fillet steak in a caramelised garlic sauce with dauphinoise potatoes with a refreshing tomato and mozzarella carpaccio for starters. Tonight I opt for a mushroom risotto and a panna cotta for dessert. 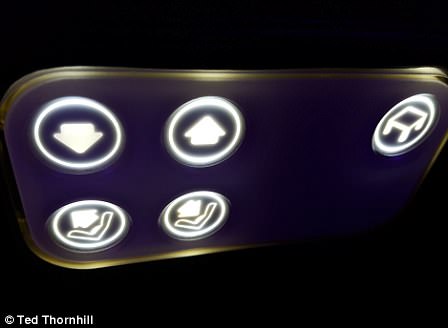 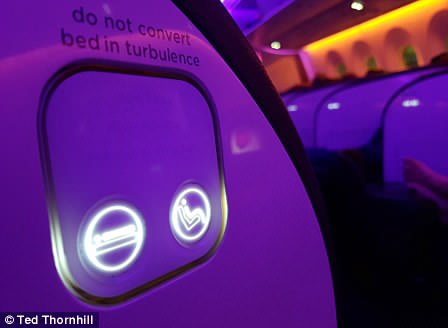 Illuminating: Upper class seats can be reclined at the touch of a button (left). But passengers must stand up and fold the seat over before using the lie-flat switch (right)

Notable nod-of-approval touches include two very cool salt and pepper pots shaped like little propeller planes with the message ‘pinched from Virgin Atlantic’ on the bottom and a proper linen table cloth.

Dinner over, it’s time for a drink at the bar, surely the piece de resistance of the cabin.

It’s while having a chinwag around this with my travelling companions and a few cheeky snifters that the upper class experience really takes off.

But it isn’t perfection.

I like the feeling of being cocooned in Virgin’s pods – but I’ve experienced business class seats with more storage space – on Finnair’s A330, for instance.

And while the seat folds down at the touch of a button into a very comfy flatbed, it has to be done in two stages. To go from reclining club-style seat to bed you need to stand up, fold the seat over, then hold down a button to flatten it.

A seat that flattens in one movement would be ideal. 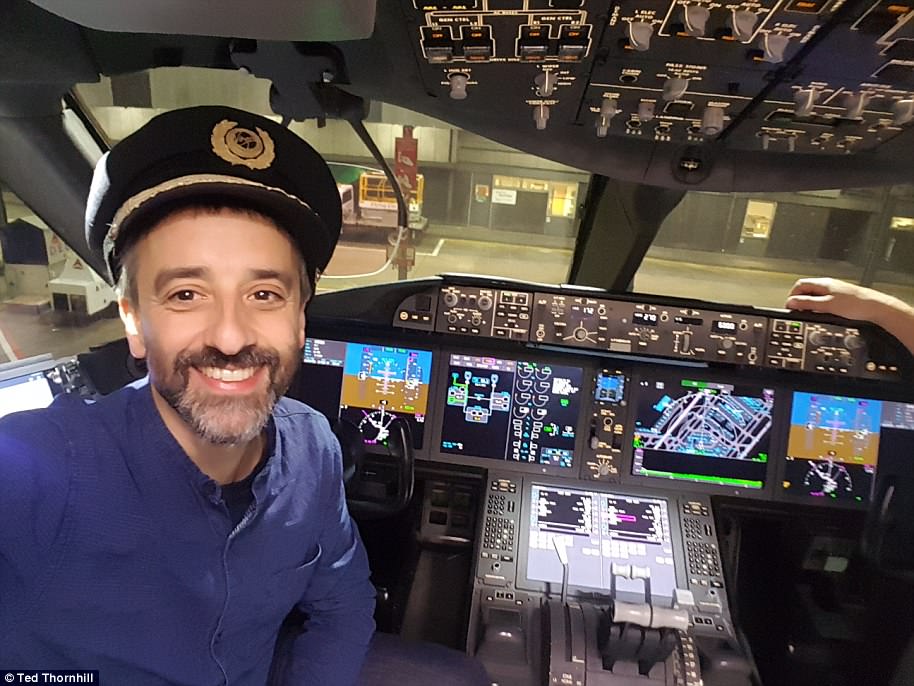 Ted was allowed to sit in the captain’s seat at Heathrow before take-off. Here the captain reassured him that ‘yes, I do know what all the buttons do’

And peculiarly, on the return journey, my duvet emerges from its bag feeling cold and damp. Clean, but wet.

A stewardess informs me that one other person has flagged a similar issue.

My guess is that it hasn’t been dried properly by the laundry team.

It doesn’t put too much of a dampener on things, though. I’ve got a (dry) pillow and mattress and once the Virgin Atlantic pyjamas are on (yes, they hand them out mid-flight) I get a solid four or five hours sleep under some blankets fetched by the stewardess.

And I wake up to a tasty full English with a croissant and coffee.

The upper class experience isn’t over yet though.

I head to the stylish ‘revivals lounge’ at Heathrow for a pick-me-up coffee and a banana.

The lounge offers a lot more though – showers, full breakfasts and even a shirt pressing service, so that anyone going straight to work can arrive looking pin sharp.

It’s impressive, but not as impressive as the Virgin Clubhouse we hang out in before our outward flight from Heathrow. This is so good it poses a threat to boarding the aircraft on time.

It boasts a 14-metre cocktail bar, power showers and a spa that offers everything from haircuts to manicures.

No wonder it’s a legend among lounges.

And I arrive there having been chauffeured in a flash Merc to a private check-in area by Virgin’s limo service. There I’m in a queue of zero and a member of staff even takes my bag from the boot of the car to the luggage conveyor belt for me, before I negotiate the private security area.

Here one other solitary traveller has the effrontery to delay me by a handful of seconds.