A former Iranian footballer who was sentenced to 74 lashes for ‘spreading lies’ asked for his punishment to be carried out in a national stadium in a defiant symbolic gesture.

Hassan Rowshan, who trained as a manager at Aston Villa and who coaches Esteghlal in Tehran, claimed his team was ‘more interested in making money from rich families and did not produce any professional players’.

But two of the side’s directors sued him for libel, and it is understood he did not provide ample evidence in court to avoid conviction.

Hassan Rowshan (pictured as a player), who trained as a manager at Aston Villa and who coaches Esteghlal in Tehran, claimed his team was ‘more interested in making money from rich families and did not produce any professional players’

The popular footballer, who used to play for the national team, was fined 10 million Rials (£195) and sentenced to 74 lashes on Wednesday.

Mr Rowshan asked for this to be carried out in the 25,000-seat Amjadiya stadium in Tehran.

He told the Telegraph: ‘I have no money to pay and would happily go to receive the lashes. But I ask the authorities to carry out the lashing in Amjadiya stadium in Tehran.’ 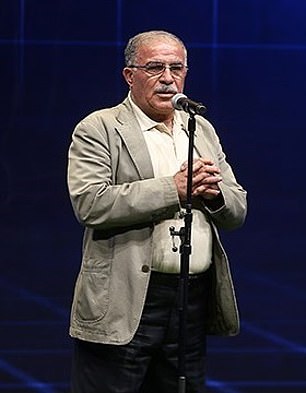 He was sued and lost in court. He asked for 74-lash punishment to be done in national stadium in Tehran

He added: ‘I thank Allah for this verdict and obey the court’s ruling.’

Mr Sarabi, who now coaches Pars, an Iranian youth football team in north London, said all of Iran’s football achievements have been at Amjadiya, with Mr Rowshan playing a key role.

He added: ‘By challenging the authorities to lash him at the national stadium he is implying that they are lashing the country’s football and its pride history.’

It is unclear if the punishment will be undertaken due to a potential backlash from the public.

He progressed to the Iran team and, as a striker, became a national figurehead.

Iran’s domestic football clubs are mostly run by retired members of the Revolutionary Guards, with widespread claims of corruption.