Is ‘miracle’ cancer therapy all it’s cracked up to be?

Nigel Lewis-Baker is a busy man: he runs a charity, spends time with wife Janet, 71, and their eight grand- children and has a thriving social life.

What makes this so extraordinary is that three years ago he was told he probably had just months to live.

Nigel, also 71, a former businessman from Effingham in Surrey, was diagnosed with prostate cancer 13 years ago. It was inoperable, as it had spread.

Although Nigel still has cancer, the drug Prostvac appears to be holding it at bay

He endured hormone treatments to starve the tumour of the testosterone feeding its growth, several rounds of chemotherapy and 37 sessions of radiotherapy.

At best, treatment would hold the cancer off for several months before it would start growing again. After it spread to his hip and skull a year after his initial diagnosis, he was told he had perhaps a year to live.

It was then that he was offered the chance to take part in a trial for an experimental drug called Prostvac. The drug, which is still in clinical trials at 200 hospitals worldwide, tackles tumours by harnessing the power of the immune system.

More than two years on, Nigel is in robust health — although he still has cancer, the drug seems to be holding it at bay. He is now campaigning, through his charity Topic of Cancer, for others to be able to benefit from immunotherapy as he did, as such drugs are not widely available on the NHS. 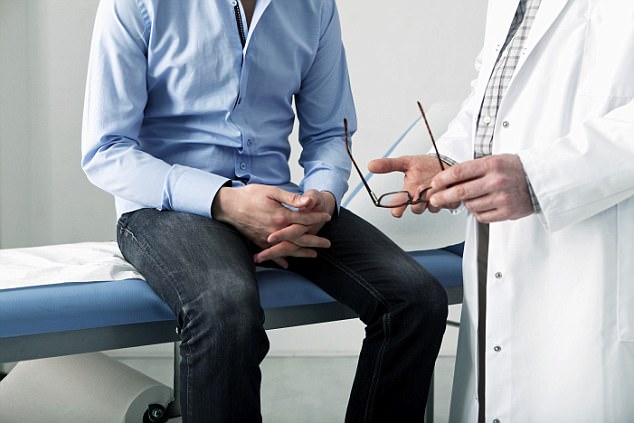 Nigel endured hormone treatments to starve the tumour of the testosterone feeding its growth, several rounds of chemotherapy and 37 sessions of radiotherapy (stock photo)

‘For me, immunotherapy has been a life-saver,’ says Nigel.

Immunotherapy has been hailed as the biggest advance in cancer treatment in decades.

While chemotherapy can destroy healthy as well as diseased cells, immunotherapy ‘turbo-charges’ the immune system so it targets and destroys just cancer cells. It’s usually given as weekly or fortnightly infusions for up to 90 minutes a time.

The principle of the treatment was discovered in 1891 by an American doctor, William Coley, who injected a patient’s inoperable tumour with bacteria-filled fluid to see if it would ‘fire up’ the immune system. A full recovery followed.

Coley repeated the experiment in other patients with astonishing results. But fellow medics remained unconvinced, and with the rise of chemotherapy in the Forties, the treatment fell out of favour.

But in the past decade interest was rekindled when cancer specialists called the drugs ‘game-changers’ after early trial results showed 74 per cent of patients with the skin cancer malignant melanoma were alive a year after starting treatment, compared with one in ten of those not given the drug.

As Alan Melcher, a professor of translational immunology at the Institute of Cancer Research in London, explains: ‘The progress made in such a short space of time has been astonishing — it has surpassed all my expectations.

‘In melanoma it helped patients in whom nothing else worked,’ he says. ‘And in lung cancer it has outperformed all other treatments in terms of improving survival rates.’

‘It’s proving to be the biggest advance in cancer treatment for at least the past 20 years.’

Last month a form of immunotherapy was shown to have impressive results in leukaemia patients for whom other medicines had failed, with 71 per cent seeing their tumours shrink or disappear.

Professor Melcher believes it will eventually be the norm for treating many of the biggest cancer killers. The drugs have been shown to be kinder than chemotherapy, with fewer side-effects.

Stories abound of people such as Nigel who survived for years, having been told they were dying, after treatment in a clinical trial.

So why is immunotherapy not more widely available? And is it really the miracle cure it seems? The answer to the first question is cost: while some immunotherapy drugs have now been licensed for use in the UK in certain cancers, they can cost as much as £100,000 per patient per year and are not routinely prescribed on the NHS.

Watchdog NICE has rejected several immunotherapy drugs on the grounds of cost — in April, turning down nivolumab for advanced head and neck cancer.

Instead, immunotherapy has been available only through trials or, once licensed, via the Cancer Drugs Fund (CDF), set up by David Cameron to give patients access to costly drugs; if an oncologist thinks a patient would benefit, they can apply to the fund.

However, only a limited number of patients qualify, so some resort to desperate measures.

Earlier this year, Lisa Harris, 46, an ovarian cancer patient from Gateshead, sold virtually everything — including her house and car — to raise £45,000 for treatment with the immunotherapy drug pembrolizumab, at a private clinic in Germany, after conventional treatments failed. In the UK, this is licensed only for lung and skin cancer. In months, blood tests showed a steep drop in Lisa’s cancer markers.

The immunotherapy drugs available via the CDF include ipilimumab (brand name Yervoy), for malignant melanoma and certain types of lung cancer. It targets T-cells, normally released by the immune system to attack foreign cells. T-cells carry a CTLA-4 molecule which controls them so they don’t attack healthy tissue.

Ipilimumab turns this off so cells can go into full attack mode against cancer cells. In trials, average survival time in terminally ill patients increased to ten months from six. But some who took part in the first trials are still alive years later. It was licensed in the UK in 2011.

Another is nivolumab (brand name Opdivo), for advanced melanoma and lung cancer.

But there is another problem — only around one in five patients responds to treatment, albeit some very well. The rest see no benefit, or their tumour shrinks before returning weeks or months later.

One theory is that once the drugs take the brakes off the immune system’s T-cells, they become over-stimulated and are too exhausted to launch an effective attack.

In July a trial for pembrolizumab (Keytruda) found it didn’t improve survival rates in those with advanced head and neck cancer compared to standard treatment.

Drug companies have ploughed millions into treatment development and want to highlight success stories. But some experts fear the benefits are over-hyped.

Professor Karol Sikora, former head of the World Health Organisation cancer programme, says: ‘Patients are very aware of immunotherapy. They read about it and wonder why they can’t have it.

‘But it’s not a panacea for all cancers. If you gave the drugs to 100 people, about 40 would see quite dramatic shrinkage of tumours in a month or two.

‘But a year later only about ten will still have significantly reduced tumours. The others will grow, as the cancers become resistant to the drugs.’

Professor Sikora adds that 5 to 10 per cent of patients can suffer significant side-effects, such as lung inflammation and joint issues.

‘We need to manage expectations, as many of these people are desperate. One of the worst aspects is when they go crowd-funding to get money for the treatment because they only hear positive reports.

‘These drugs could still become a major weapon against cancer, but it could be another five or ten years before we really find out.’

Daniel and Katie Cohen were among those with high hopes for immunotherapy. In January 2015, Katie, then 32, found the cough she’d had for months — that she was told was just an infection — was, in fact, advanced lung cancer.

‘We were distraught,’ says Daniel, 41, a property investor from Bushey, Herts. ‘We were due to get married in May that year.’

Katie, an addiction therapist, was given two chemotherapy drugs, which temporarily stabilised the cancer but made her very ill. The couple timed their wedding for when she felt relatively well.

But by January 2016 the chemotherapy was causing kidney failure and the couple were advised to use private health insurance to get nivolumab — not available for lung cancer on the NHS at the time.

The relative lack of side-effects made a big difference. ‘After chemotherapy I would bundle Katie in the car and take her home to bed,’ says Daniel. ‘But after immunotherapy she could walk out and we went for lunch.’

But last summer the drugs stopped working. In August 2016 an MRI scan showed the cancer was growing again. Despite higher doses, Katie deteriorated. In February, doctors gave two immunotherapy drugs together — ipilimumab and nivolumab. Studies have shown this can boost the response rate to around 50 per cent.

But Katie didn’t respond, and she died on April 8, aged just 34.

Daniel says: ‘Immunotherapy bought her time. We hoped it would give us more years. But that wasn’t the case.’