Ivana, 68, showed off her animal instincts in a leopard-print trench coat at the Dennis Basso show, while Marla, 53, opted for an ethereal white jumpsuit at the John Paul Ataker presentation.

President Donald Trump’s first ex-wife, Ivana, turned heads in her eye-catching Roberto Cavalli coat as she posed for pictures ahead of the the designer’s Spring 2018 New York Fashion Week show, which was held at the Plaza Hotel. 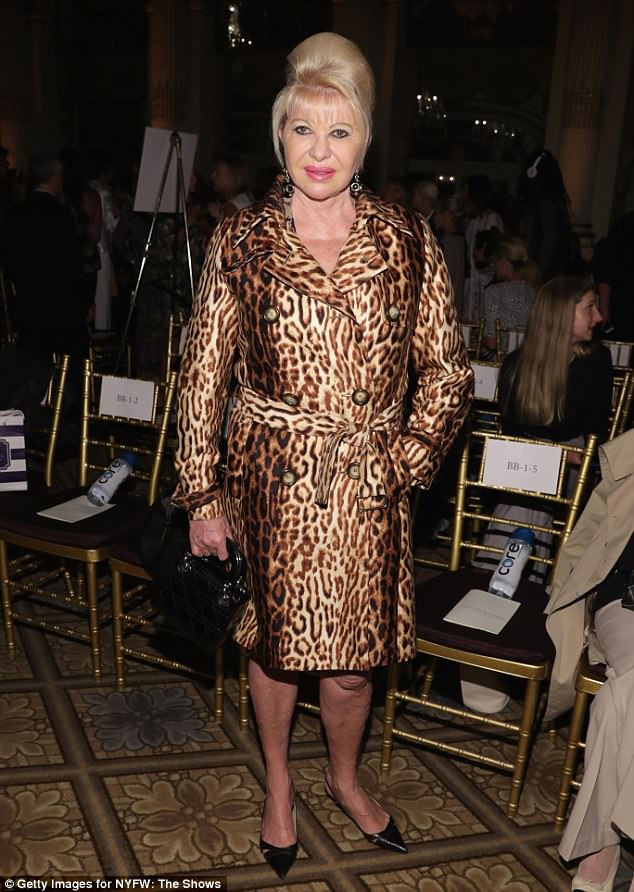 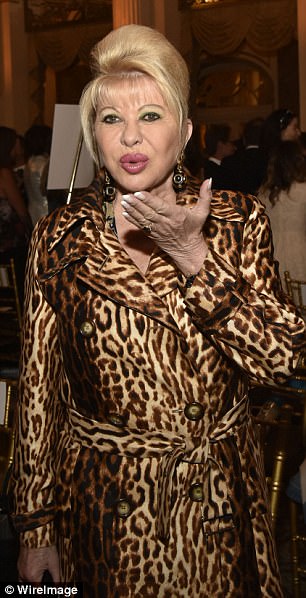 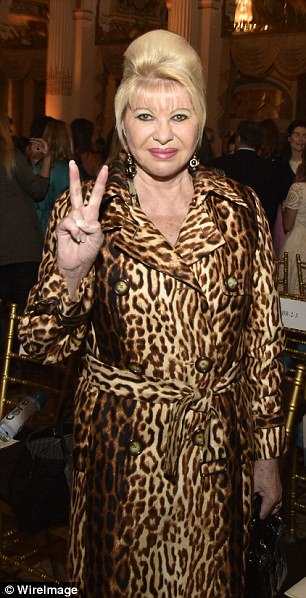 Working the camera: President Donald Trump’s first ex-wife blew kisses and threw the peace sign while posing for photos ahead of the show

Ivana had the trench tied around her waist, revealing only her legs, and she carried a small black handbag in her hand.

The former model topped off the outfit with a pair of classic black slingback heels, which kept the focus on her statement coat.

Ivana had her platinum blonde hair styled in an elegant bouffant that allowed her to show off her dangling earrings, and only a sliver of her black and green patterned dress was exposed under her coat.

The mother-of-three’s eyes were accentuated with liner and bright green shadow, but she opted for a more classic shade of pinks for her lips. 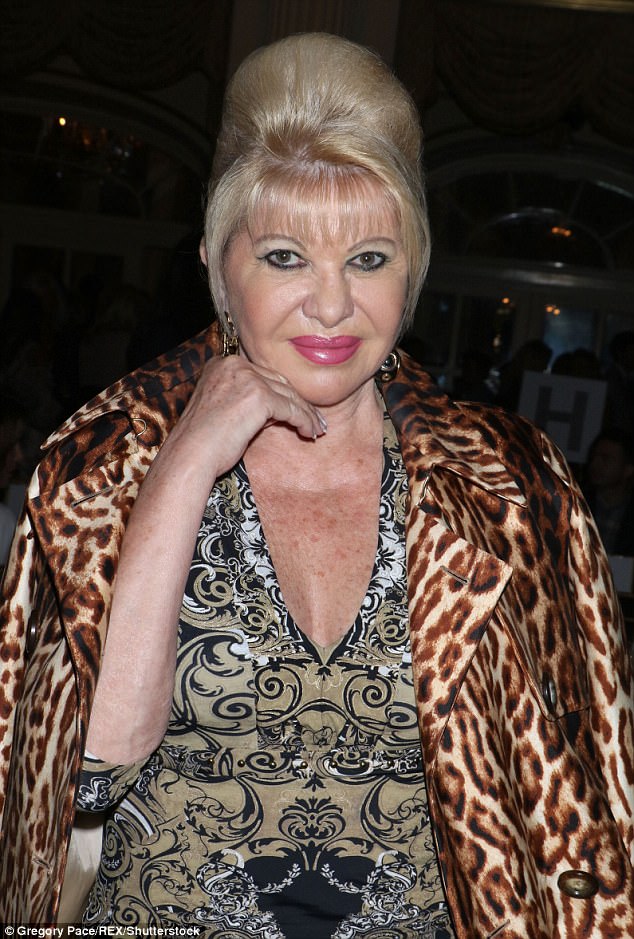 Strike a pose: The former model’s eyes were accentuated with liner and green shadow, which matched her patterned dress 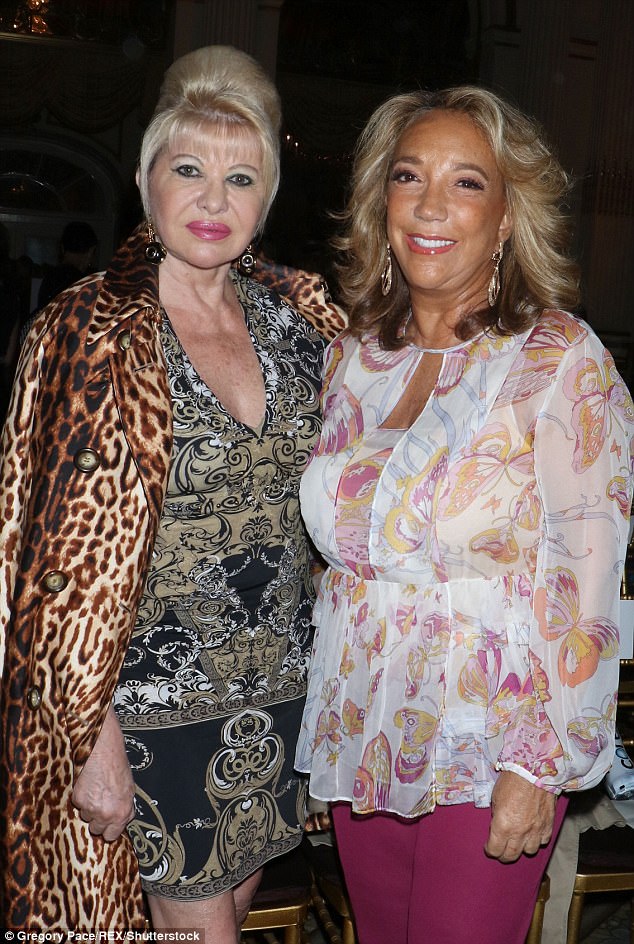 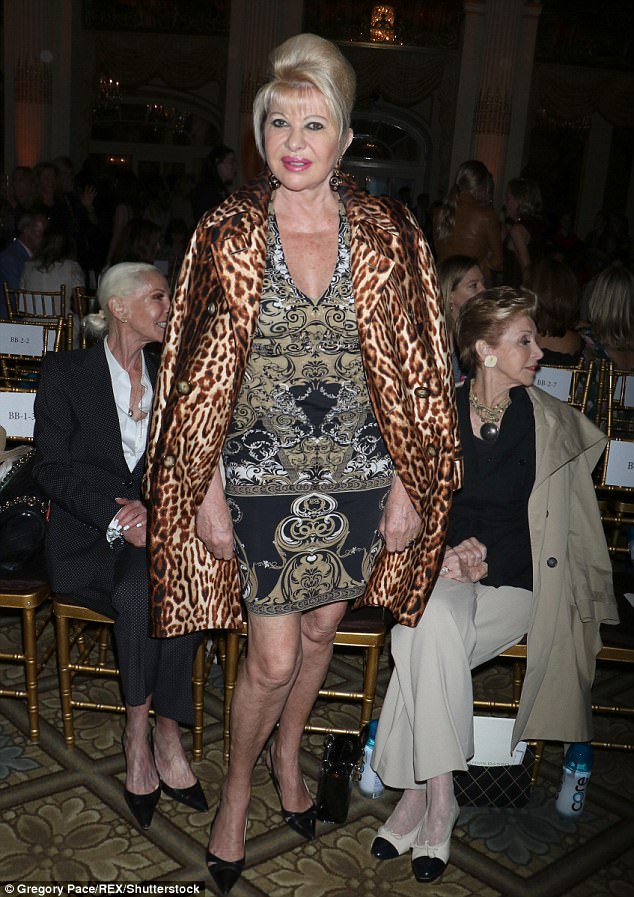 Working it: The former model wore her statement coat over her shoulders before she sat down 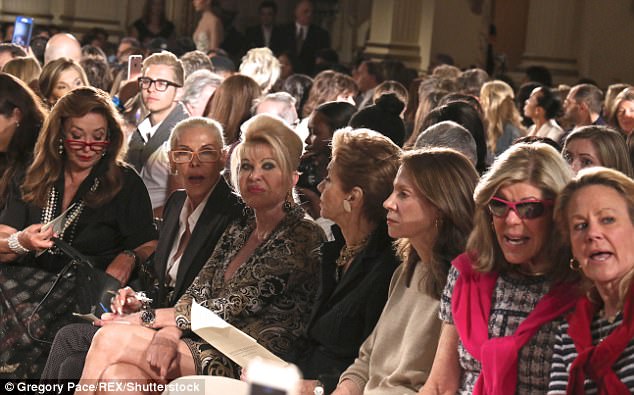 VIP seat: Ivana sat in the front row with her legs crossed as she waited for the show to start 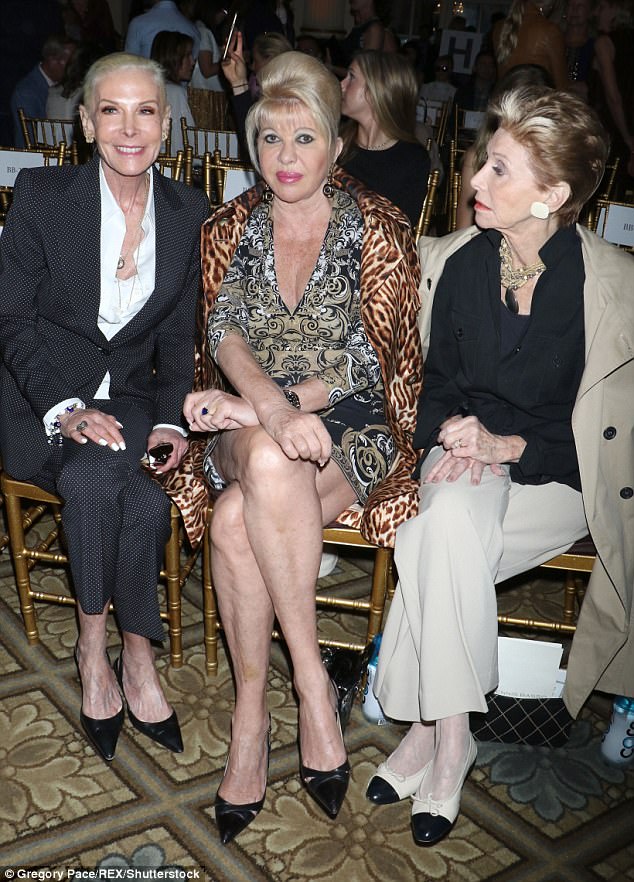 When she arrived at her front row seat, Ivana shed her coat to show off her patterned long-sleeve mini dress, which featured a plunging neckline that showed off her cleavage.

Although sitting front row at the designer’s show is nothing out of the ordinary for Ivana, another attendee felt compelled to remind her Instagram followers that Trump’s former wife has nothing to do with him or controversial policies.

While sharing a photo of Ivana sitting with her legs crossed in the front row, José Castelo Branco wrote: ‘I was [seated] right in front of #ivanatrump @itsivanatrump I’ve always liked her and I still do, nothing to do with the major issues we are going through in this country right now… 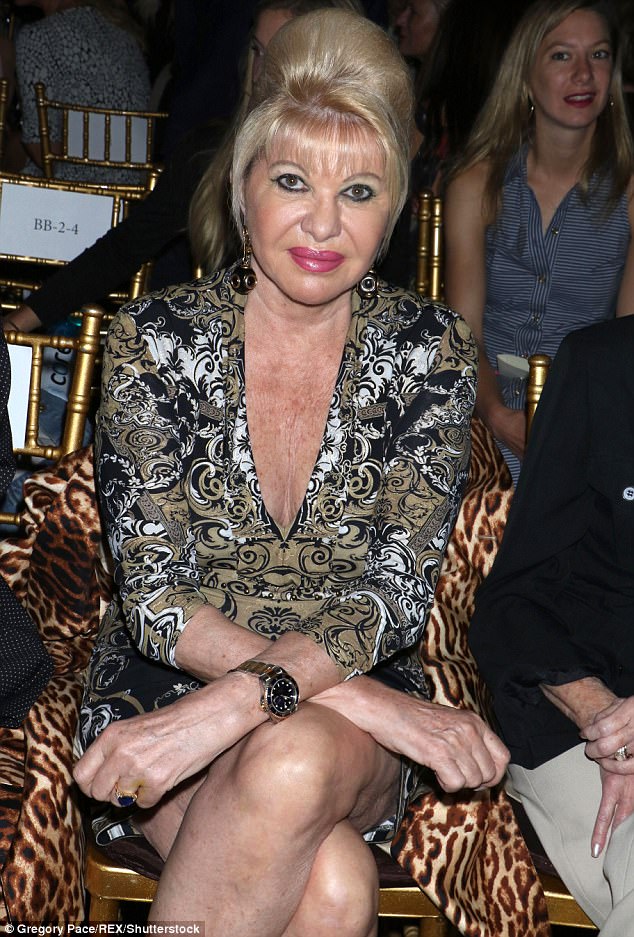 Got it, flaunt it! Ivana’s dress featured a plunging neckline, which showed off her cleavage 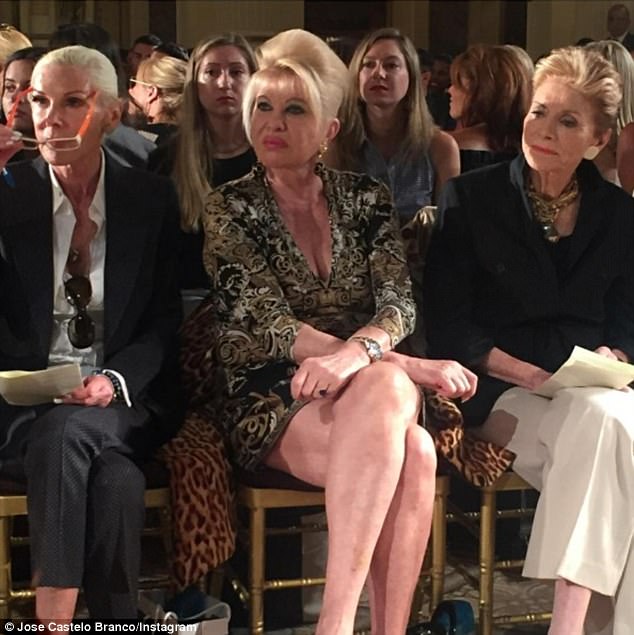 ‘I’ve always liked her and I still do’: José Castelo Branco shared a photo of Ivana sitting in the front row in her green and black patterned dress 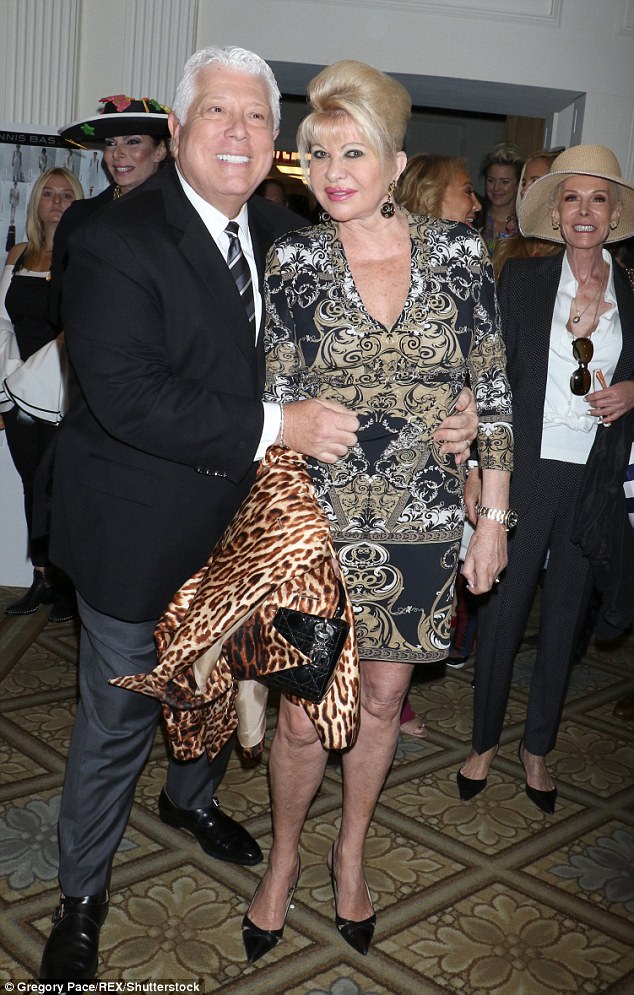 Close friends: Ivana posed for pictures with Dennis Basso after his show 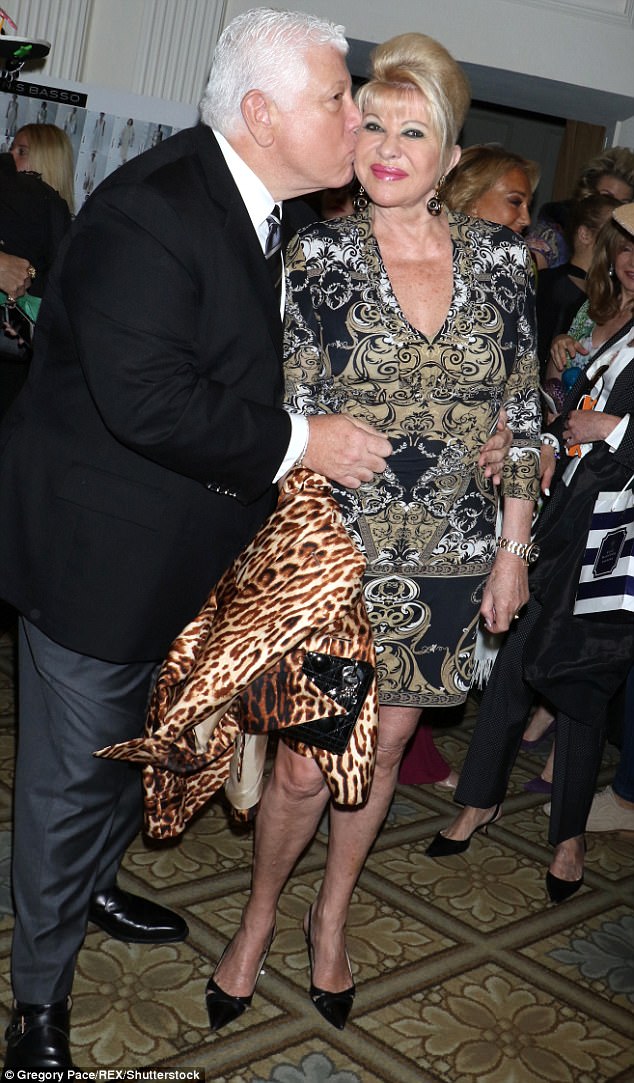 He adores her! The designer gave Ivana a sweet kiss on the cheek as she smiled for the camera 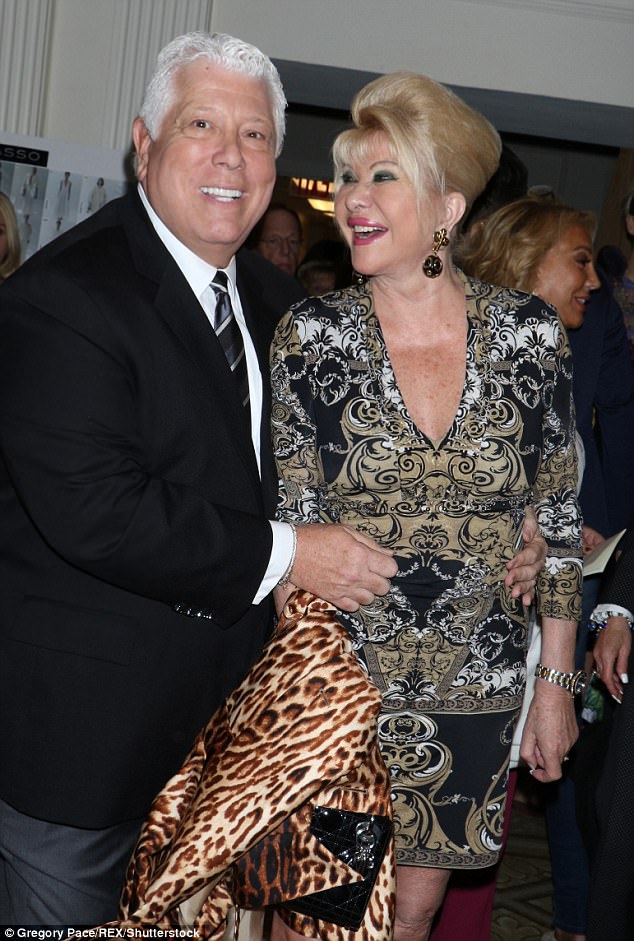 All smiles: Basso had his arms wrapped around Ivana’s waist as they struck a pose

‘SHE’s NOT RESPONSIBLE FOR THAT… Parents can’t be blamed for their children’s choices and vice-versa. Even less ex-husband’s!’

Ivana’s only daughter, Ivana Trump, is one of her father’s senior advisers in the White House, and her two sons, Donald Trump Jr. and Eric Trump, are now the heads of the Trump Organization.

It was revealed earlier this year that Don Jr. took a meeting with a Russian lawyer during the campaign after he was told she had damaging information about the Democratic presidential nominee, Hillary Clinton.

The 39-year-old met with Senate Judiciary Committee investigators last Thursday to discuss the meeting, and he insisted that he did not collude with Russia to hurt Clinton’s campaign against his father. He is expected to soon meet with House investigators as well. 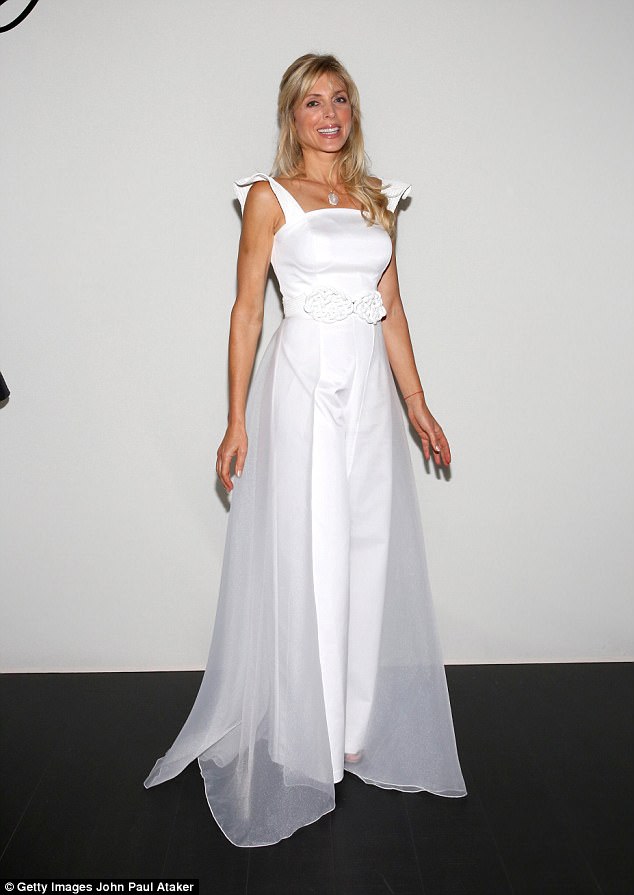 Ethereal: Marla, 53, donned a white jumpsuit featuring a sheer overlay that gave her the appearance of wearing a long gown at the John Paul Ataker show on Monday 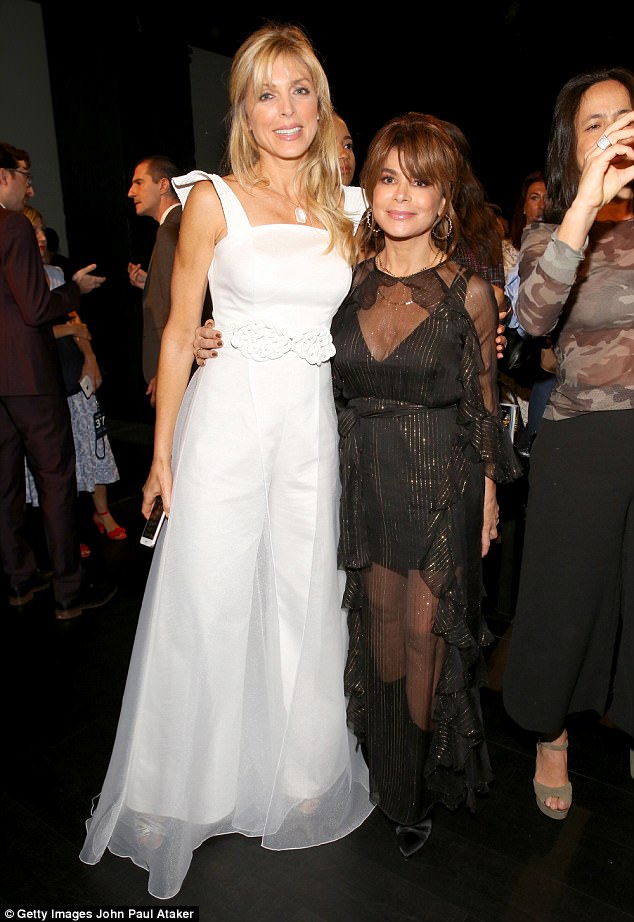 Meanwhile, Eric, 33, and his wife, Lara, are expecting their first child — a baby boy. Ivana’s daughter-in-law, who is 40-weeks, is due to give birth any day now.

And as Ivana made her way to New York Fashion Week, Ivanka, 35, and her husband, Jared Kushner, joined President Trump and First Lady Melania to honor 9/11 victims with a moment of silence on the White House lawn on Monday morning.

Marla, who spent last fashion week with her 23-year-old daughter, Tiffany Trump, headed to the John Paul Ataker by herself while her only child was mostly-likely in class at Georgetown Law in Washington, D.C.

Trump’s second ex-wife donned a white jumpsuit featuring a sheer overlay that gave her the appearance of wearing a long gown. 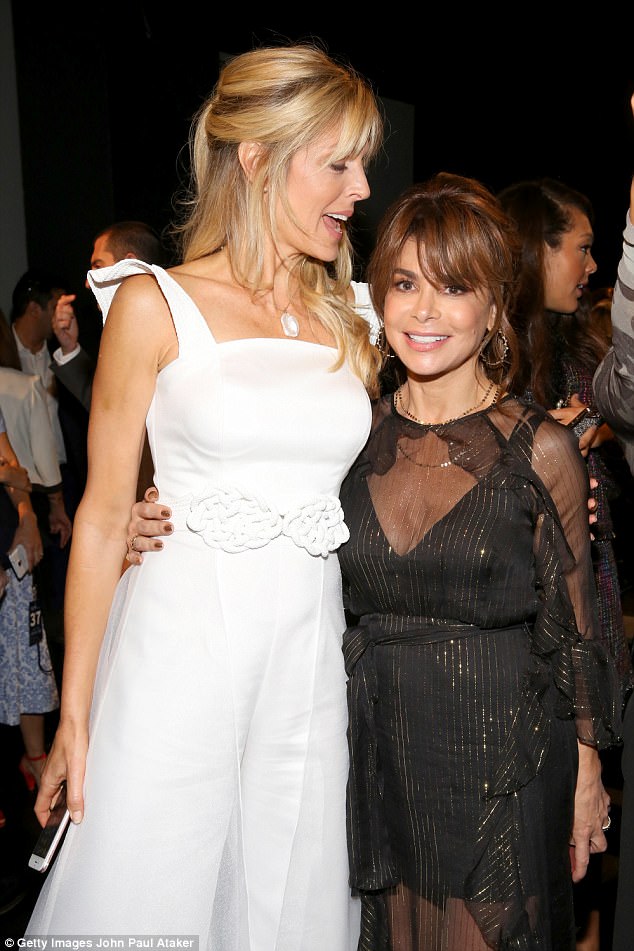 Warding off bad vibes: Marla accessorized her look with natural-looking make-up and a large crystal pendant hanging from her neck 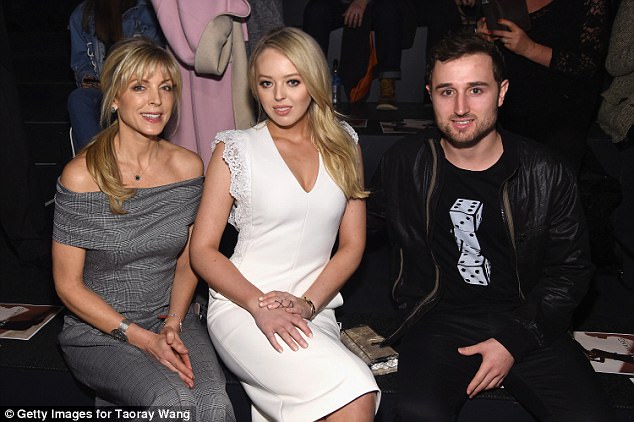 The yoga-lover wore her long blond hair pulled half-up with her long bangs brushed off of her forehead.

She accessorized her look with natural-looking make-up, a large crystal pendant hanging from her neck, and a red string Kabbalah bracelet on her left wrist.

Marla happily posed for photos with Paula Abdul at the show held at Skylight Clarkson Sq, throwing her arm around the singer as they smiled for the cameras.

Although they were both attending shows on Monday, it is probably safe to say that Marla and Ivana won’t be catching up this fashion week. 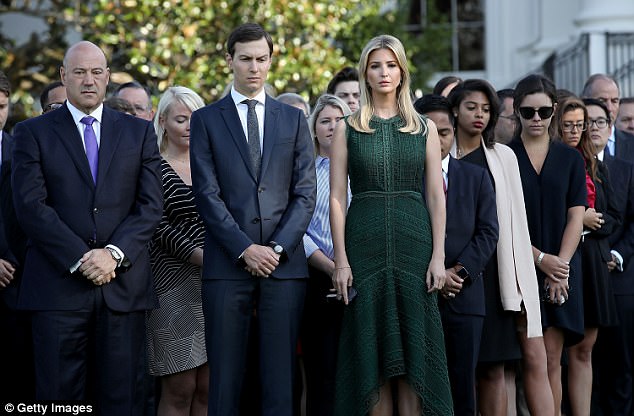 Senior adviser duties: While Ivana was getting ready for the show, her daughter, Ivanka Trump, and her husband, Jared Kushner, paid tribute to 9/11 victims at the White House 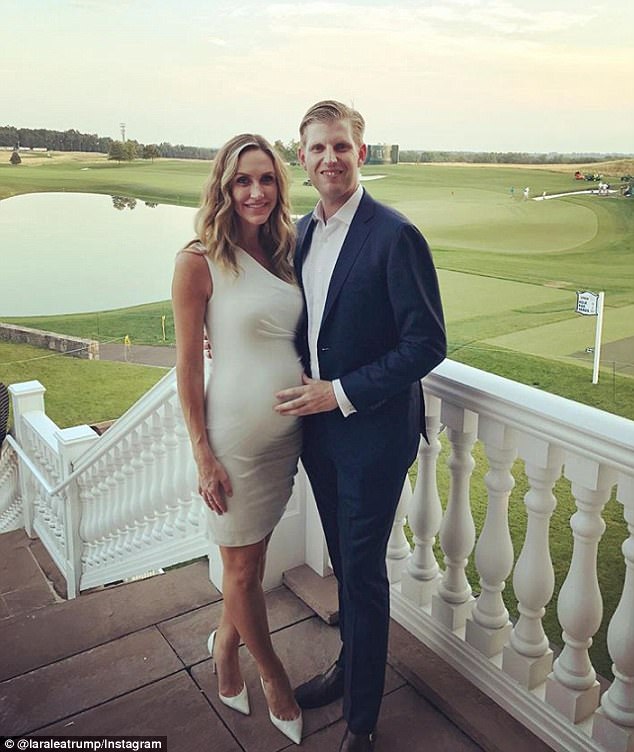 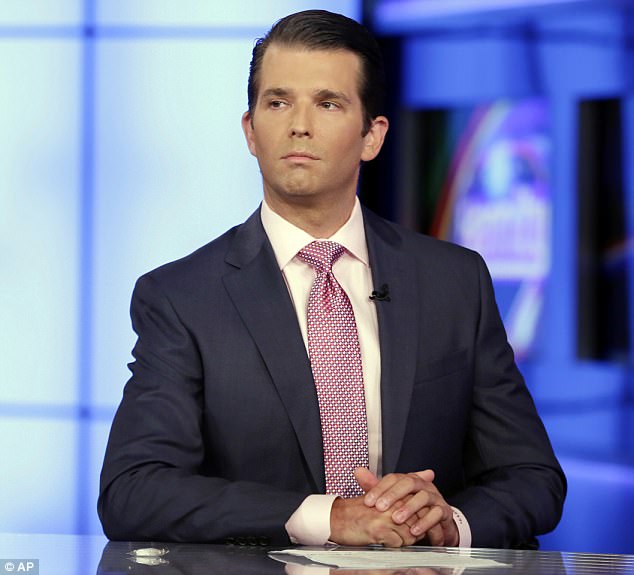 Under fire: Ivana’s eldest son, Donald Trump Jr., is under investigation, although he insists he did not collude with Russian during the presidential election

Trump’s publicized infidelity with Marla led to his split from Ivana in 1991 after 14 years of marriage, causing a media frenzy over the scandal.

He said ‘I do’ to Marla just two years later, a few months after the birth of their first and only child together, Tiffany.

Last year, in an interview with the New York Post , Ivana admitted that she still blames Marla for the end of her marriage and isn’t willing to let bygones be bygones.

‘[Marla] asked to apologize to me in the Daily Mail in London. They asked if I accepted the apology and I said no. Why should I? She broke my marriage!’ she said of her ex-husband’s second wife.

‘That makes me sad because I wish her nothing but love,’ Marla told People of Ivana’s comments. ‘I love her kids, and if she’s holding any kind of resentment toward me, I really hope, for her sake, that she can forgive me.’