He recently addressed his staggering weight loss as he continues to recover following a stint at a Thailand rehab for drug and drink addiction.

And James Argent has now shared the secret behind his slimmer figure in a video uploaded to Instagram.

The TOWIE star, 32, told his fans that low-calorie curries, which he buys ready made, have been his ‘ultimate saviour’.

Candid: James Argent, 32, shared the secret behind his slimmer figure in a video uploaded to Instagram

In the infomercial-style clip, Arg flaunted his new physique in a black tracksuit, while unboxing a supply of the gifted dinners.

He ran through the ingredients before heating a meal up and sitting down to a plate of chicken jalfrezi.

Arg uploaded the video alongside a lengthy caption that encouraged his followers to try the food delivery service. 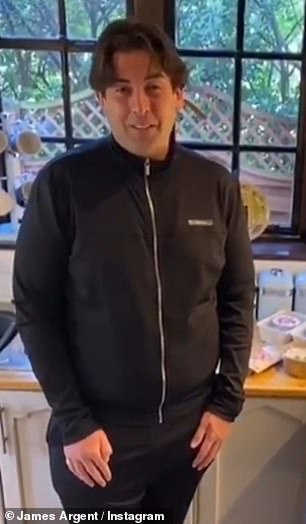 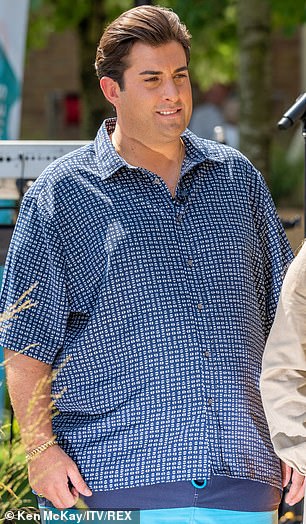 Revelation: The TOWIE star told his fans that low-calorie curries, which he buys ready made, have been his ‘ultimate saviour’

He wrote: ‘The ultimate saviour! @tukinfoods have sorted out my lockdown and sent me this awesome box of freshly made curries.

‘These really taste awesome and at less than 400kcal the curry in a naan is ideal!  They are low in sugar, natural ingredients and an excellent source of protein!

‘They are also made fresh to order and delivered the next day.’

And his celebrity followers were quick to praise his new look with Megan McKenna writing: ‘This has made me hungry. Looking good Arg!!! [red heart emoji].’

And girlfriend Gemma Collins kept it simple with a sticking out tongue and pink heart emoji. 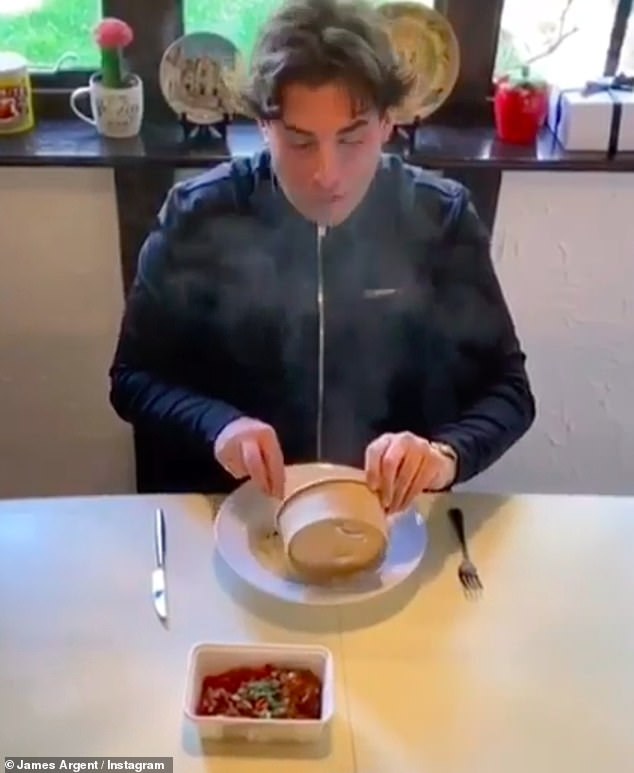 Sizzling: He ran through the ingredients before heating a meal up and sitting down to a plate of chicken jalfrezi

It comes after James Argent addressed his staggering weight loss as he shared a before and after photo on Instagram earlier this month.

The former TOWIE star is continuing his recovery after he flew to Thailand earlier this year to go to rehab for his drug and drink addiction.

Arg posted a picture from a recent run, alongside a photo of himself at pal Elliott Wright’s son’s christening in April last year.

The reality star captioned the post: ‘I’m making progress, Inside & Outside One day at a time’. 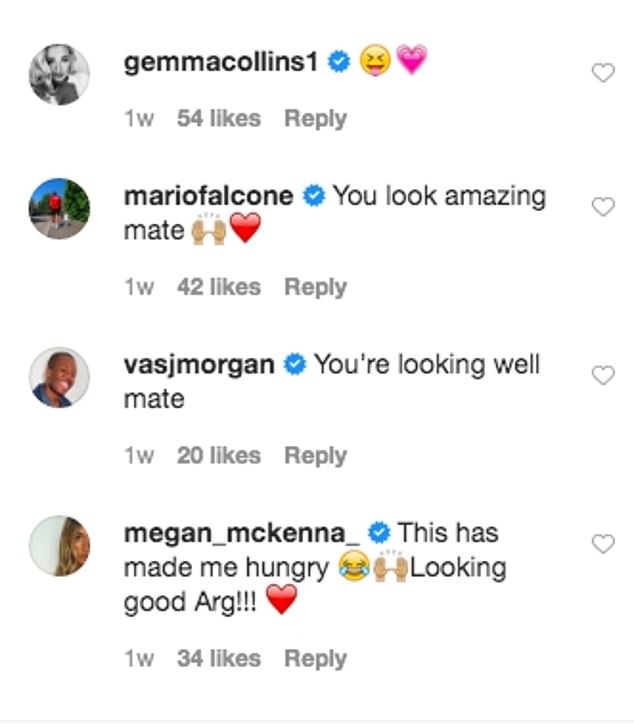 Support: His celebrity followers were quick to praise his new look including Gemma Collins, Megan McKenna and Mario Falcone

Dozens of the Arg’s celebrity pals applauded him for his efforts, while also encouraging him to stay motivated.

James is reportedly getting a helping hand from his supportive longtime friend Mark Wright in adjusting to life after rehab.

According to The Sun, Mark, 33, and his wife Michelle Keegan, 32, have remained in touch with the TOWIE star throughout his challenges, and most recently since he returned to the UK from Thailand.

A source said: ‘Mark was straight on the phone to James to make sure he is OK. They’ve spoken a lot and James knows that Mark is there for him. Michelle will be too. They both think the world of him and want him to get back to his very best.’ 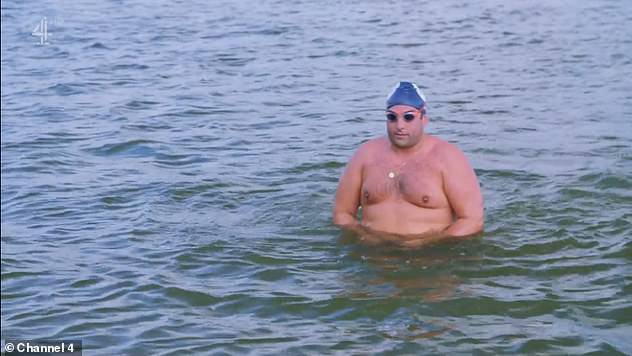 Determined: The TV star started his fitness journey by taking part in swimming the English Channel in Sink Or Swim for Stand Up To Cancer in 2019 (pictured)

According to the friend, Arg has struggled somewhat since returning to his native Essex, given the recently mandated nationwide coronavirus lockdown but is ‘looking to the positive and making sure he gets plenty of rest, eats right and does a bit of exercise everyday.’

MailOnline contacted representatives for James Argent and Mark Wright for comment at the time.

The troubled star was taken to hospital for the second time in two months last year after friends and family feared he had attempted a second ‘overdose’.

Paramedics rushed to his £1.3million home in South Woodford, Essex in December, where they found the star ‘disorientated’ shortly before friends – including Mark – rallied around in a bid to help him get the support he needs.

Insiders told MailOnline: ‘Mark was at his house for around six hours to support him. This was after Arg had been to hospital and come home again… 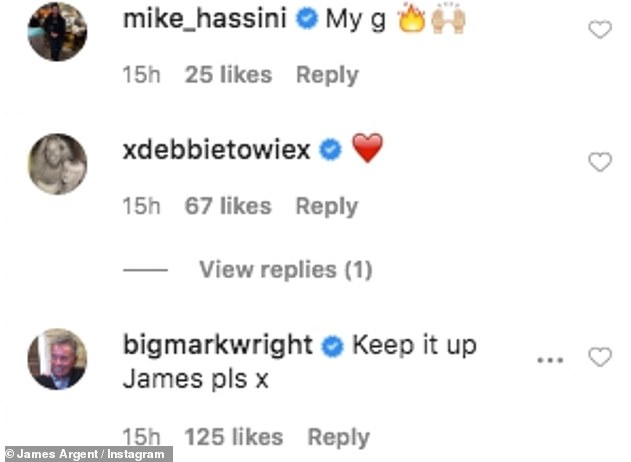 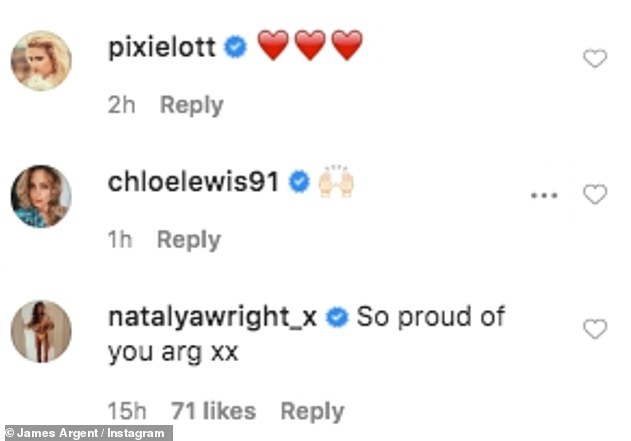 ‘Arg can’t afford rehab but Mark and other close friends and family are clubbing together to put him in a good place so he can overcome this.

‘He has realised he needs help with his recent addiction issues and with his weight loss battle, so has turned to professionals.

‘Arg is receiving some of the best care in the world and so is in an environment to finally improve his physical and mental state.’

Arg has battled drink and drug addiction since finding fame on TOWIE. In 2014 he was suspended from the show after he failed a routine drugs test.

James checked into The Priory and returned to the ITV reality show in 2015.

The TV star spent three months in a facility in Thailand over the festive season in 2016 in a bid to curb his addiction and revealed he checked himself in to a programme in order to get the ‘ongoing support’ he needed. 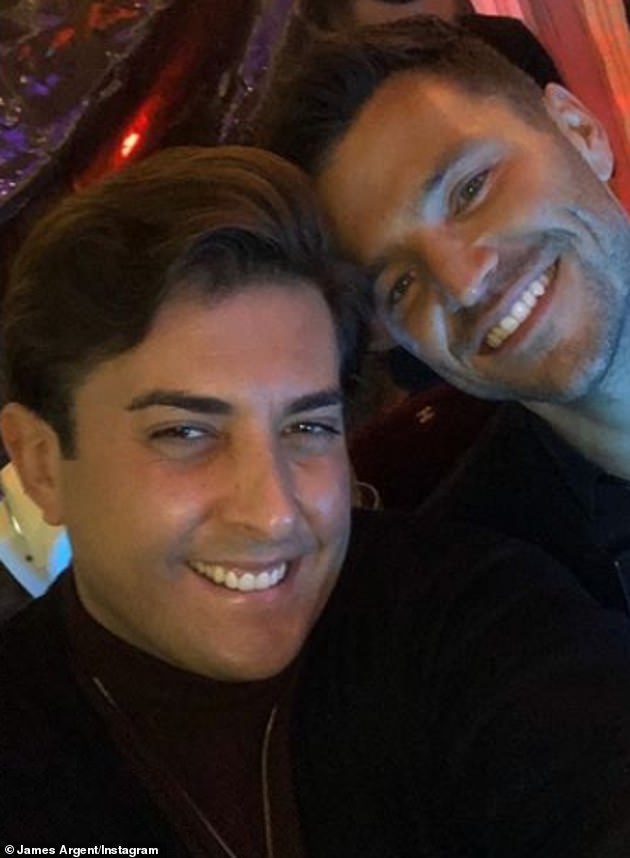 Lean on me: James is reportedly getting a helping hand from his supportive longtime friend Mark Wright in adjusting to life after rehab