I could write a book about the devious, scheming tactics employed by mothers when they suspect you might be more than a casual fling, a fleeting affair or a bit of hot sex

I’m an expert on mother-in-laws – I’ve endured four, and I’d add another two whose sons I lived with for a long time.

All six of these dragons regarded me as the devil’s spawn.

They simply believed that no woman on earth was good enough to marry their beloved son.

In these mothers’ eyes the only person who knew what was best for their darling – was his mum!

I could write a book about the devious, scheming tactics employed by mothers when they suspect you might be more than a casual fling, a fleeting affair or a bit of hot sex.

They look at you with loathing, thinly disguised as polite friendship.

They see you as a rival who must be defeated, crushed so that they can resume their intimate relationship with their darling again.

I wasn’t at all surprised to discover that posh mothers – even the Queen – behave no differently to the common classes I come from.

According to extracts published this week from author Tom Bower’s new book about Prince Charles, the Queen was totally intransigent when it came to his long-cherished plan to marry his mistress, Camilla Parker Bowles.

Charles and Diana’s tortured marriage had ended when they separated in 1992, but their divorce wasn’t finalised for another four years. 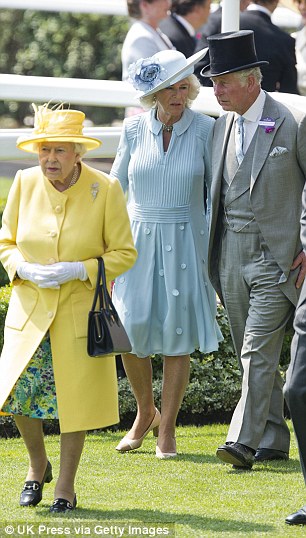 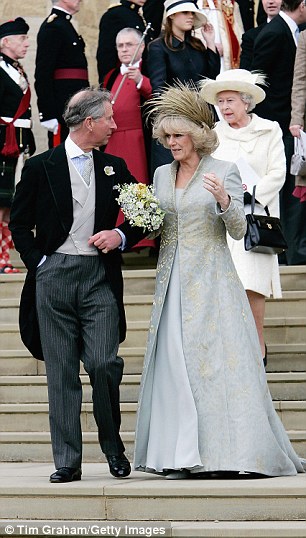 According to extracts published this week from author Tom Bower’s new book about Prince Charles, the Queen was totally intransigent when it came to his long-cherished plan to marry his mistress, Camilla Parker Bowles. Left: The Queen walks ahead of the Prince and his wife at Ascot last year. Right: Charles and Camilla walk ahead of the Queen at the blessing of their marriage in Windsor in 2005

During that time, you might wonder why Charles had not been permitted to discreetly introduce his mistress to his sons, brought her out of hiding and into his life for holidays and weekends?

Camilla had been his support and strength, his patient best friend through all the Diana tears and tantrums, the eating disorders, the war of attrition conducted through the press.

Yet, as far as Her Majesty was concerned, Camilla was a ‘wicked woman’ and she ‘wanted nothing to do with her’ and then went to extraordinary lengths to prevent Charles – by then in late middle age – introducing Camilla in public as his partner.

The couple were forced to behave like a couple of silly teenagers having sex in private, in borrowed houses and secluded hideaways, never touching in public or even being in the same room on official occasions.

According to Bower, after Diana gave her infamous interview with the BBC’s Panorama in 1995, in which she claimed there were ‘three people in my marriage’ – Charles hoped the pretence come to an end.

Incredibly, the fact that Diana was clearly nuts didn’t mean the Queen would accept Camilla.

By 1996, Charles had managed to get divorced but was convinced that even his brother Andrew and sister Anne were against his choice of partner.

Camilla, through no fault of her own, had divided the entire family simply by not walking away from her man when he was at his lowest. 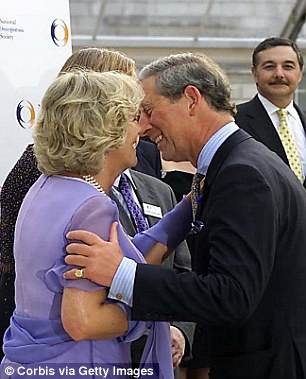 Camilla greets Charles with a kiss at an event for the National Osteoporosis Society, of which she is a patron

No matter that the Queen had managed to produce three children (Andrew, Anne and Charles) who married the wrong people – not helped by the scheming courtiers who surrounded their mother and influenced her choices or their strange upbringing, reared by nannies with little parental contact.

It’s understandable they might be lacking in emotional intelligence.

The same could be said of the Queen – who adored her father and was thrust into the spotlight by his early death.

But to demonise Camilla the way the Queen did was ridiculous – she was hardly a rival.

The Queen’s extraordinary behaviour – inviting Camilla’s ex-husband Andrew to parties and receptions – in spite of the fact he has always been known as a serial shagger (his birthday is on the same day as mine, and when we met at dinner once, I can attest to his incredible charm) with a string of mistresses – whilst refusing to acknowledge Camilla, was, frankly, perverse.

When the Queen Mother died in 2002, the Queen relented and allowed Camilla to attend the funeral, but not with Charles.

When the couple finally managed to get permission for their marriage, at a register office in Windsor Town Hall in April 2005, the Queen did not attend.

She pitched up for the blessing in the Royal Chapel at Windsor, and then rushed off to watch the Grand National on television with her racing pals! 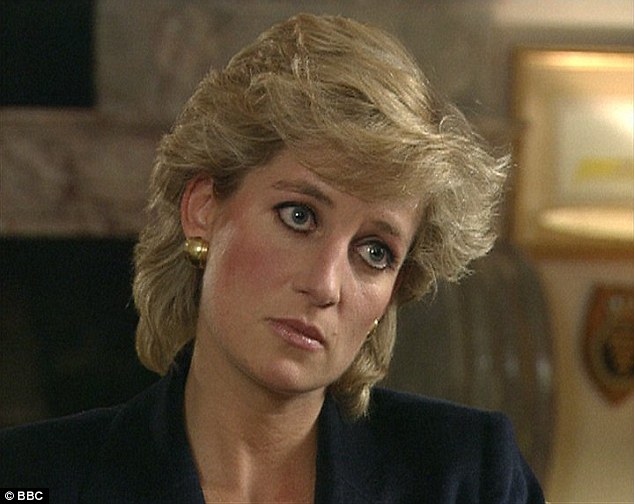 According to Bower, after Diana gave her infamous interview with the BBC’s Panorama in 1995 (pictured), in which she claimed there were ‘three people in my marriage’ – Charles hoped the pretence come to an end

At the modest reception (the Queen refused to pay for a lavish banquet, when she’d given plenty of those for despots and foreign tyrants) she refused to mention Camilla by name in her speech and only posed for less than a minute for the official photos.

I am no fan of Prince Charles but I adore Camilla.

She is funny and welcoming and down to earth, a bit battered by how her life panned out.

I have been through that horrible experience, when your mother-in-law wishes you’d evaporate into dust.

But I’m not the only person to have experienced this horror show – a few years ago, a close friend married his long-term partner at the same register office in Windsor as Camilla and Charles.

His mother came for the ceremony, then refused to attend the small family lunch, claiming she was ‘busy’.

At the evening festivities she sat in a prominent position with a face like thunder.

One of my mother-in-laws loathed me so much that, following her death, she had arranged for her memorial service to include the following tribute: ‘Katharine adored her son, but one of the most unhappy moments in her life was when he married Janet Street-Porter’.

Mother-in-laws manage to exact their revenge from beyond the grave.

I wish Camilla every happiness; after surviving the Queen’s epic disapproval, she deserves it.