She’s been spending lots of time with her beau Ben Affleck since rekindling their romance in April.

And Jennifer Lopez appeared to be in great spirits as she made a fashionable arrival for a photoshoot in Los Angeles on Wednesday.

The actress, 51, cut a typically stylish figure in a tight white dress which boasted a plunging neckline and accessorised with mirrored sunglasses.

Stunning: Jennifer Lopez looked sensational in a white dress as she made a fashionable arrival for a photoshoot in Los Angeles on Wednesday

Jennifer smiled as she stepped out of the white vehicle and headed into the shoot, chatting to a man who was holding open the door.

She rocked her white ensemble which also featured lettering across the material and silver studded poppers on the collar.

Adding a little sparkle to her look, Jennifer donned a stunning diamond necklace and toted a blue bag with silver detailing.

The singer wore her locks down and styled into curls, letting her blonde tresses bounce off her shoulders while posing for a selfie in the car. 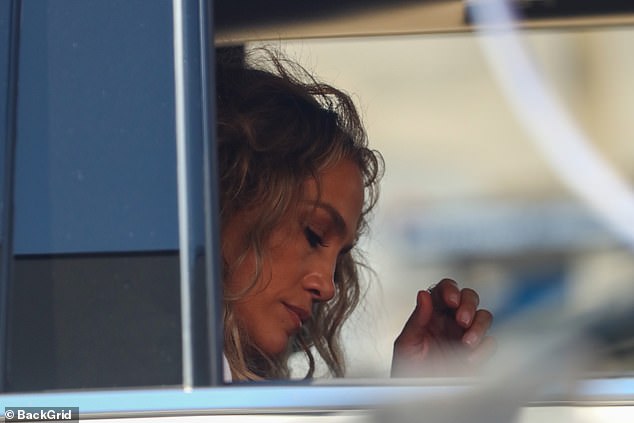 Beauty: The actress, 51, wore her curly locks down, letting her blonde tresses cascade over her shoulders as she sat in the white vehicle ahead of making an entrance

Jennifer has often been spotted with her rekindled flame Ben over recent weeks, with the duo enjoying a dinner date in Beverly Hills on Friday.

Ben was also seen looking exhausted as he puffed on a cigarette and left her Bel Air house earlier in the day.

The reunited lovebirds, who broke off their engagement 17 years ago, have been seen shuttling back-and-forth from their West Coast homes since they began dating again in April, shortly after she ended her relationship to her fiancé Alex Rodriguez. 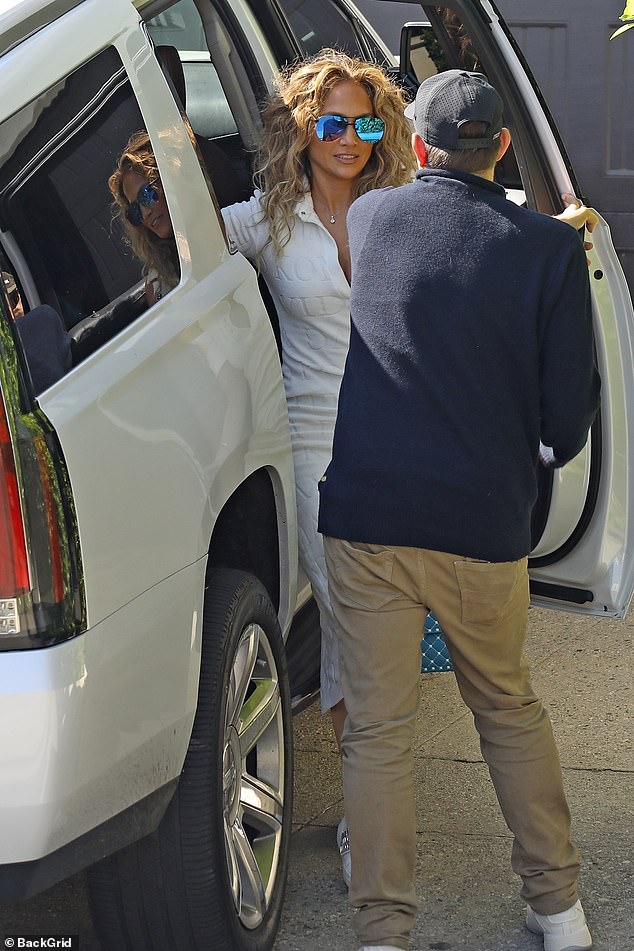 Here she comes: Jennifer accessorised with a pair of mirrored sunglasses and a stunning diamond necklace 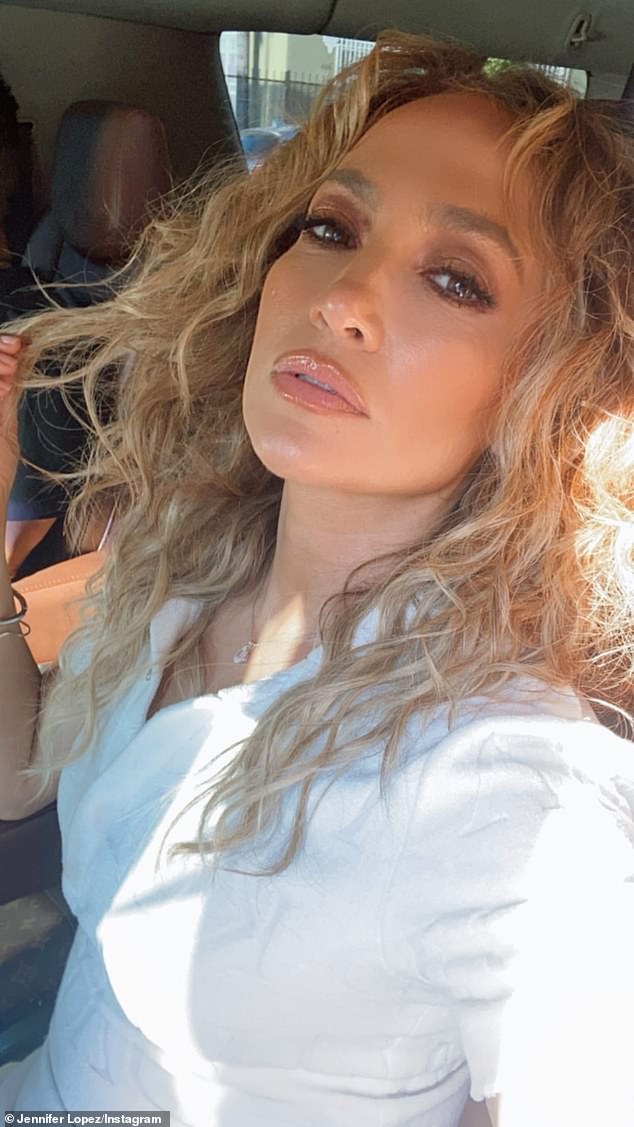 Glam: She added neutral makeup tones and a couple of silver bangles to complement her figure-hugging white dress 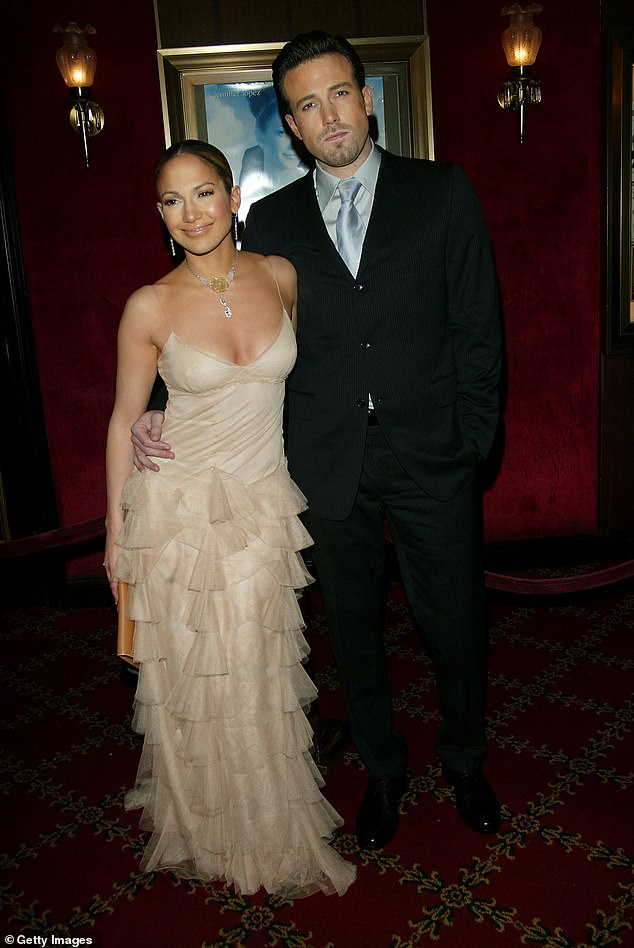 Back in the day: J Lo and Ben Affleck have been seen shuttling back-and-forth from their West Coast homes since they began dating in April (pictured together in NYC in 2002)

Last week, it was reported that Jennifer viewed the Good Will Hunting actor as ‘the one that got away,’ after they split in 2004.

‘Jennifer always saw Ben as the one that got away,’ an insider told Page Six. ‘She was crushed after they broke up, though she felt at the time that she had no other choice but to call off their engagement.’

It was also said that following many PDA-packed outings — including one steamy kissing session at Nobu Malibu — and getaways to Miami and Big Sky, Montana, that ex-fiancé Alex had come to terms with the fact the relationship was ‘over now.’

‘When they first split, he wanted to work things out, and still held on to hope that he and J.Lo would get back together,’ a source told ET. ‘He’s come to terms with the fact that it’s over now.’

The sports correspondent was photographed spending time with Affleck’s ex Lindsay Shookus earlier in June, although his rep told Page Six ‘there is absolutely zero there,’ and that they had been friends for 15 years.

In another seemingly bold move he also splashed out on a $200k/month rental property in the Hamptons — just one mile away from the JLo Beauty mogul.

It was said that it was nothing more than a convenience as he takes weekly meetings in Bristol, Connecticut, however. 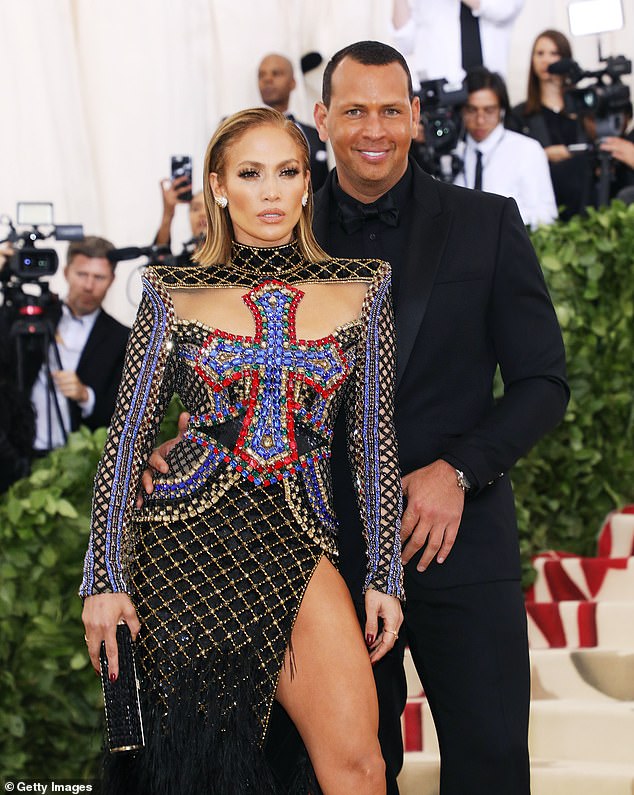 Over: Jennifer ended her relationship to her fiancé Alex Rodriguez earlier this year (pictured together in 2018 at the Met Gala in NYC)