The Labour leader is set to order the party’s MPs to vote down the proposals despite warnings that a failure to back the agreement will plunge the country into economic chaos and lead to us crashing out of the EU without a deal.

In his speech to Labour party conference in September, Mr Corbyn had claimed that he wanted to ‘reach out to the Prime Minister’ as Brexit was ‘about the future of our country… not leadership squabbles or parliamentary posturing’.

In a message to Mrs May, he had pledged: ‘If you deliver a deal that includes a customs union and no hard border in Ireland, if you protect jobs, people’s rights at work and environmental and consumer standards – then we will support that sensible deal. A deal that would be backed by most of the business world and trade unions too.’

But last night Mr Corbyn was preparing to vote against Mrs May’s agreement in the hope that the turmoil created would lead to a general election.

He tweeted: ‘This is a bad deal which isn’t in the interests of the whole country.’

Speaking at an interview with Mirror and Express reporters he said Labour ‘would do a better deal’ with Brussels and would ‘re-open negotiations quickly’ if the party won a snap election.

However he resisted increasing grassroots pressure to back a second referendum, saying a new vote was ‘not a priority’ and putting him at odds with former party leaders including Tony Blair.

Yesterday at Prime Minister’s Questions, Mr Corbyn claimed she had negotiated ‘a bad deal that will leave the country in an indefinite halfway house without a real say’.

Downing Street is hopeful that a number of his MPs will defy him and support the Prime Minister, reasoning that a no-deal Brexit, which they fear could bring about an economic disaster, would be a worse outcome.

Labour MPs representing Brexit-backing constituencies, including Caroline Flint, Gareth Snell and Lisa Nandy, have suggested they could back an agreement that prevents the country from crashing out of the EU without a deal.

However, the hard-Left faction Momentum is getting ready to launch an offensive to exert pressure on the MPs not to vote for the Brexit deal in defiance of Mr Corbyn.

Pro-Brexit Labour MP Kate Hoey, who has previously backed the government in some key votes, has also signalled she would not back the deal because of concerns that it does not deliver on the referendum result.

Tony Blair yesterday urged Labour MPs to reject the deal and back a second referendum, hitting out at Mr Corbyn’s ‘abject refusal’ to ‘lead the country out of the Brexit nightmare’. 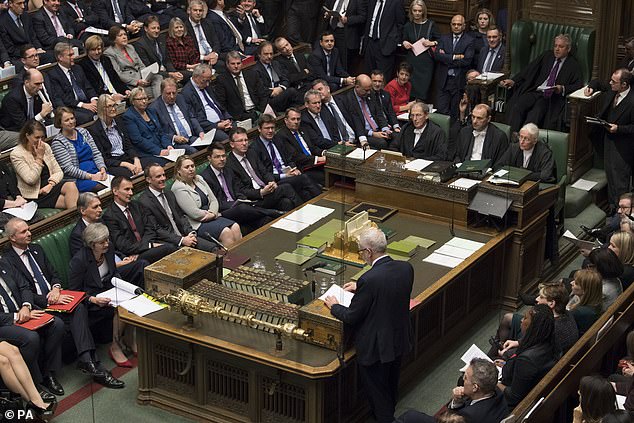 Yesterday at Prime Minister’s Questions (pictured), Mr Corbyn claimed she had negotiated ‘a bad deal that will leave the country in an indefinite halfway house without a real say’

In a speech in London, Mr Blair said he had some sympathy with the Prime Minister who was faced with ‘an impossible circle to square’ in keeping a frictionless border with Ireland but extracting the UK from the single market and customs union.

But he said: ‘Nothing can disguise the nature of the deal she has chosen, if reports of it are true.

‘This deal isn’t a compromise, it’s a capitulation.

‘The withdrawal agreement will keep us tied to EU trade policy until there is an end established by ‘joint consent’ – in other words, the EU has a veto.

‘It is coated in heavy fudge, but that is the inedible biscuit beneath the coating.’

At Prime Minister’s Questions, Mr Corbyn denounced Mrs May’s draft deal as a ‘failure in its own terms’.

He told MPs: ‘It doesn’t deliver a Brexit for the whole country… it breaches the Prime Minister’s own red lines, it doesn’t deliver a strong economic deal that supports jobs and industry, and we know they haven’t prepared seriously for no deal.’

Mrs May said Mr Corbyn was ‘wrong’ in his description and accused Labour of seeking to ‘frustrate’ Brexit. 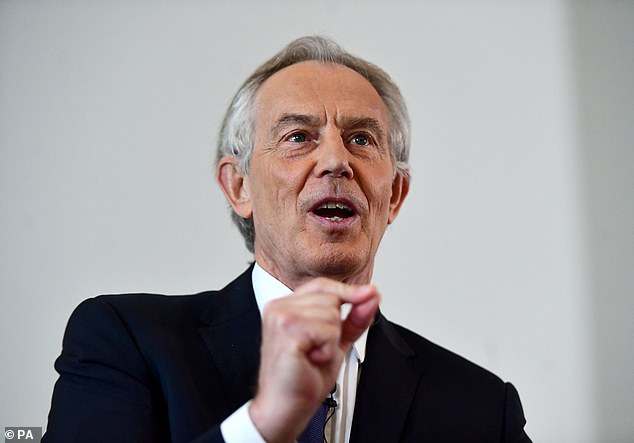 Tony Blair (pictured) yesterday urged Labour MPs to reject the deal and back a second vote, hitting out at Mr Corbyn’s ‘abject refusal’ to ‘lead the country out of the Brexit nightmare’

‘Now when we’re making progress and close to a deal he’s complaining about that.

‘I think what that clearly shows is that he and the Labour Party have only one intention: that is to frustrate Brexit and betray the vote of the British people.’

A senior spokesman for the Labour leader later said that the ‘likelihood’ was that the party would vote against the Prime Minister’s plan.

The spokesman said: ‘We’ve set out what our priorities are and from what we know of it, it doesn’t meet those priorities and it looks like a botched, half-baked deal that doesn’t deliver for the country as a whole.

‘Labour has an alternative plan for Brexit which includes a new and comprehensive customs union with a British say on future trade deals, and a new single market deal with full protections and guarantees on rights and standards and protections.

‘We believe that package would command support in Parliament and unite Leavers and Remainers and has majority support in the country, and that is what should be negotiated.’