Jeremy Corbyn would be the ‘least intelligent and least well-educated politician ever to enter No 10’ after flopping at school where he scraped two Grade E’s at A-Level, biography reveals

If Corbyn does become British’s first Marxist-Trotskyist Prime Minister, he’ll also be the least intelligent and least well-educated politician ever to enter No 10.

At school – Haberdashers’ Adams, a selective grammar in Shropshire – he was regarded as a poor student, unsporty, insouciant and gauche.

‘He was not noticeably clever,’ recalled Lynton Seymour-Whiteley, his finely named Latin teacher.

For his 16th birthday, Corbyn’s mother gave her youngest son a collection of George Orwell’s essays, although young Jeremy never claimed to have read them.

‘He was not noticeably clever,’ recalled Lynton Seymour-Whiteley, his Latin teacher (pictured: Jeremy Corbyn aged 18 in 1967)

Rather, he sat in his bedroom poring over Ordnance Survey maps of the surrounding countryside and gazing at a world atlas, dreaming of future journeys.

In the corner was a hand-operated Gestetner duplicator, used to produce leaflets for the local Labour Party. Politics was already his obsession.

Corbyn’s A-levels were dismal – he scraped two with the bottom grade E and totally failed one. With no chance of following his three brothers to university, on his last day headmaster John Roberts predicted: ‘You’ll never make anything of your life.’ 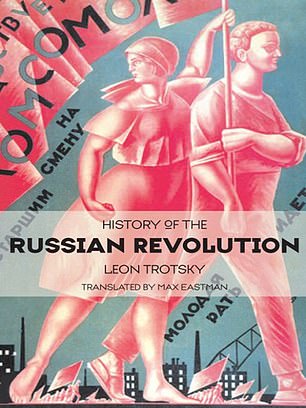 Over his head: The Trotsky book Corbyn never bothered to read

Afterwards his embarrassed mother would tell people that it was her son’s poor handwriting that prevented him getting to university. Later, she suggested he enrol at the Polytechnic of North London in Holloway to study trade unionism, and he agreed. But Corbyn barely entered the building before he abandoned the course. ‘I was utterly bored,’ he would say later, but academic work was beyond his abilities.

He and his brother Piers would in later years craft a story of defiance: how he had walked out of the polytechnic after an argument with a lecturer about his course.

Just as his first wife would be shocked by his failure to read so too was his friend and constituency agent, Keith Veness.

When they first met, Veness handed Corbyn a copy of Trotsky’s History Of The Russian Revolution. Six months later Corbyn returned the book, still in its wrapping. ‘He wasn’t interested in reading anything,’ Veness concluded. ‘It was a waste of time talking to him about books.’

Veness could not decide whether Corbyn – who relies for his news on The Morning Star and occasionally the Guardian – was unintellectual or just lazy. Stung by his academic failures, Corbyn came to loathe achievers, especially undergraduates with ambitions to get to the top.

Most of all he hated the successful and prosperous, and identified with losers.