‘I know how dearly this administration values truth’: Jimmy Kimmel apologizes and deletes misleading clip in which he claimed Mike Pence was caught delivering empty PPE boxes to a hospital

Jimmy Kimmel has apologized and deleted a video after airing a misleading clip on his show and claiming that, in it, Vice President Pence was delivering empty boxes of personal protective equipment to a hospital just for appearances.

During his monologue in Thursday night’s episode of Jimmy Kimmel Live!, the comedian and host showed a clip of Pence delivering boxes of PPEs to the Woodbine Rehabilitation & Healthcare Center hospital in Virginia earlier in the day.

‘Here he is with no mask on, wheeling boxes of PPEs into a health care center, and doing his best to lift them, what a hero… since it was going so well, and also because he didn’t realize he had a mic on, Magic Mike decided to keep it going, listen in closely here,’ Kimmel said during the monologue. 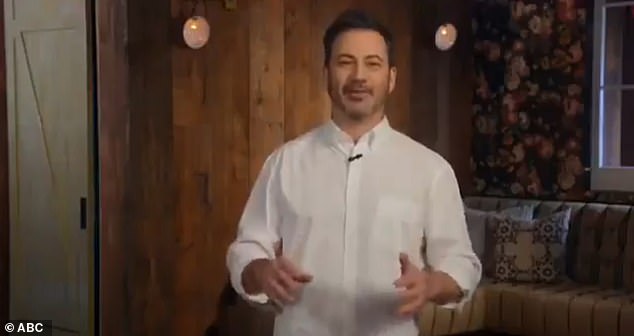 The video, which was originally broadcast by C-SPAN, showed Pence as he pushed a trolley of big cardboard boxes, then picked them up and put them down outside the hospital’s doors.

Then, when Pence returns to the delivery van, which still has boxes inside it, someone tells him: ‘Those are empty, sir. We’re good to go.’

Pence responds: ‘Well, can I carry the empty ones? Just for the camera?’

‘Absolutely,’ the unidentified man says, as those around them laugh.

Kimmel then continued his monologue by saying that ‘Mike Pence pretending to carry empty PPEs into a hospital is the perfect metaphor for who he is and what he’s doing. A big box of nothing delivering another box of nothing.’ 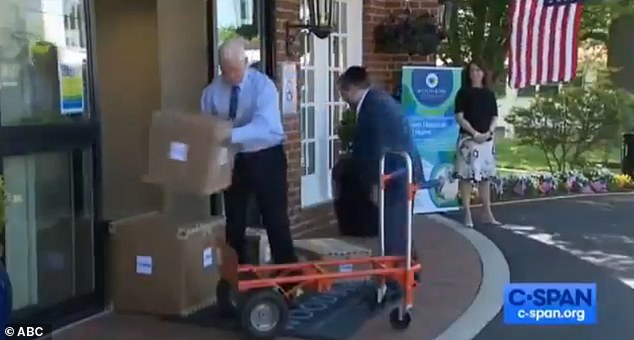 The clip showed Pence (pictured) as he delivered boxes of PPEs to a Virginia hospital. Pence then later joked about delivering empty boxes for a photo op, which he did not actually do 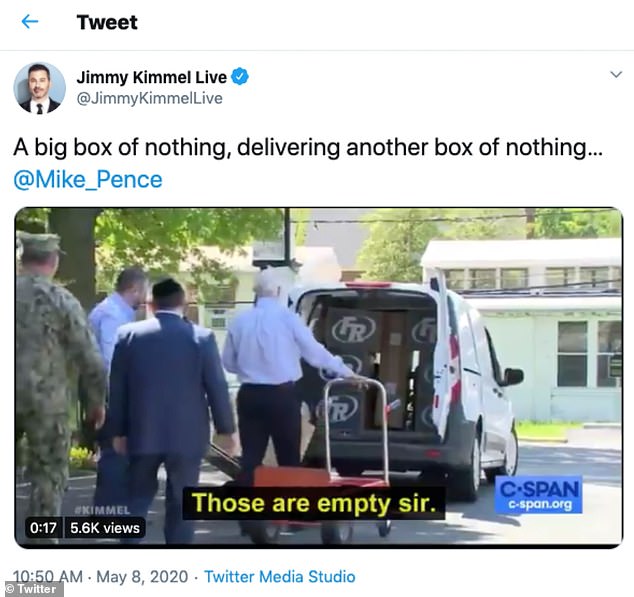 The monologue was then tweeted out by the Jimmy Kimmel Live! Twitter account, along with the statement: ‘A big box of nothing delivering another box of nothing…’ The tweet also tagged Pence’s personal Twitter handle.

After the monologue aired – and quickly went viral on social media – it was pointed out that Pence’s statements and the clip itself were taken out of context.

BuzzFeed News reported that the full C-SPAN clip showed that after the empty box exchange, Pence actually closed the truck’s cargo doors – without carrying any of the empty boxes anywhere.

On Friday afternoon, the original Kimmel Live! tweet was deleted and Kimmel took to his personal Twitter with a barbed apology of sorts.

‘it would appear that @vp was joking about carrying empty boxes for a staged publicity stunt,’ Kimmel tweeted, using Pence’s official Twitter handle.

‘The full video reveals that he was carrying full boxes for a staged publicity stunt. My apologies. I know how dearly this administration values truth.’

Kimmel’s tweet included one of the Friday morning viral tweets, posted by a pollster, who had written: ‘Mike Pence caught on hot mic delivering empty boxes of PPE for a PR stunt.’

Neither Kimmel’s network nor Pence’s team have commented about the incident yet.