Jimmy Kimmel doubles down on his war with GOP senators

Late-night host Jimmy Kimmel once again ratcheted up his criticism of Republican Senator Bill Cassidy on Wednesday over his proposed repeal of Obamacare.

For the second straight night, Kimmel used his opening monologue to blast Cassidy and the Republican Party for spearheading proposed legislation known as the ‘Graham-Cassidy bill’.

On Tuesday, Kimmel took Cassidy to task on his late-night show, saying the Louisiana Republican ‘lied right to my face’ by going back on his word to ensure any health care overhaul passes a test named for the host.

The phrase was coined by Cassidy after Kimmel announced in May that his baby son, Billy, had surgery for a birth defect and argued that all American families should be able to get life-saving medical care. 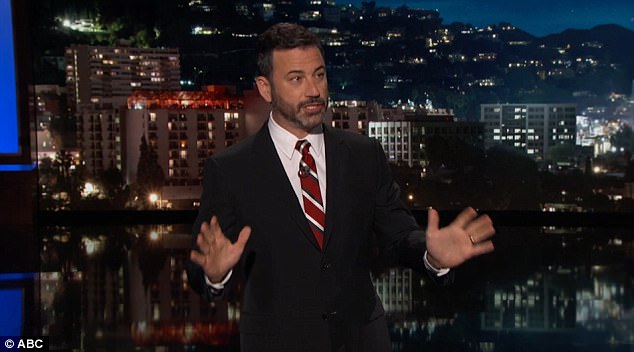 For the second straight night, Kimmel used his opening monologue to blast Cassidy and the Republican Party for spearheading proposed legislation known as the ‘Graham-Cassidy bill’

Cassidy was a guest on Kimmel’s show after the late-night comedian’s revelation about his son.

During his appearance in May, Cassidy pledged to Kimmel that he would only support health care legislation that ensured coverage for families whose newborns were stricken with illness regardless of their income. 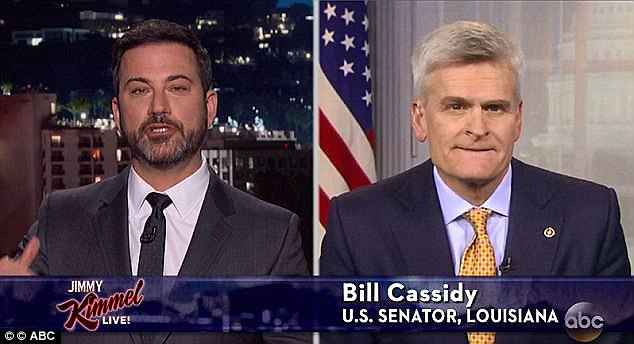 In an impassioned six-minute monologue on his Tuesday show, Kimmel tore into Senator Bill Cassidy (seen right appearing with Kimmel on his May 8 show) of Louisiana for promoting legislation that could result in millions of Americans losing their health insurance 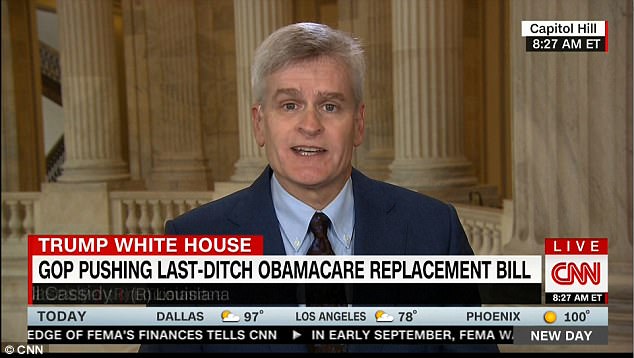 Cassidy appeared Wednesday morning on CNN and responded to Kimmel, saying that he ‘does not understand’ the Obamacare replacement bill he panned Tuesday night 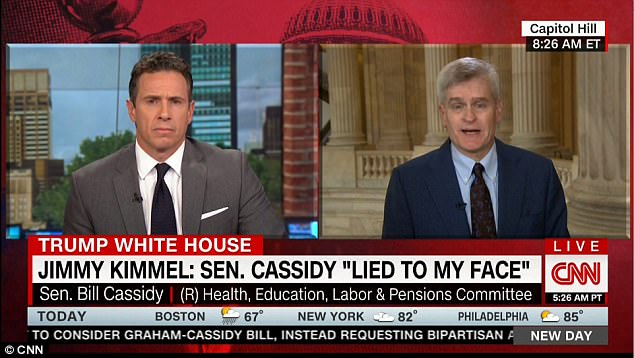 The Louisiana senator insisted that his bill would cover sick children like Kimmel’s son, who was born in April with a congenital heart defect

The senator insisted that that his proposal would ‘protect those with pre-existing conditions.’

President Donald Trump on Wednesday tweeted in support of Cassidy. 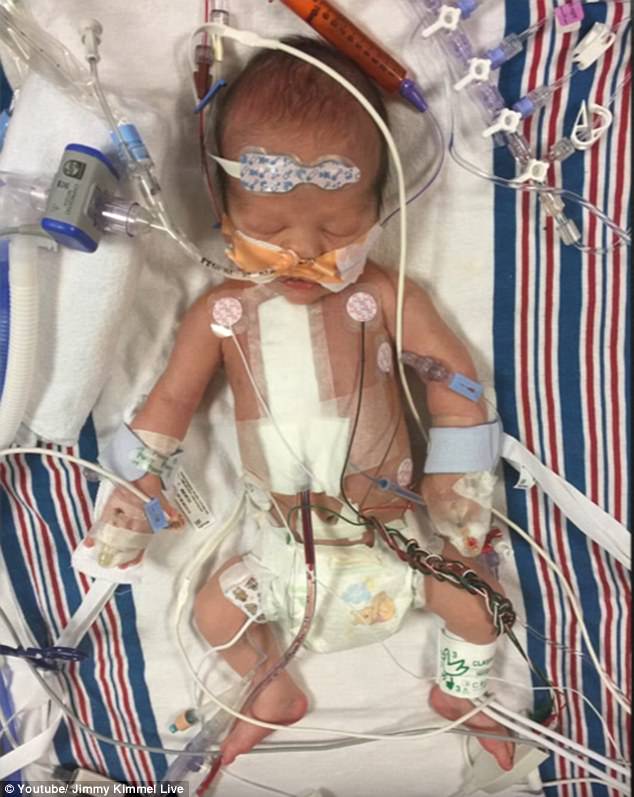 Cassidy was a guest on Kimmel’s show after the late-night comedian revealed that his newborn son, Billy, underwent open-heart surgery due to a congenital defect just hours after he was born on April 21 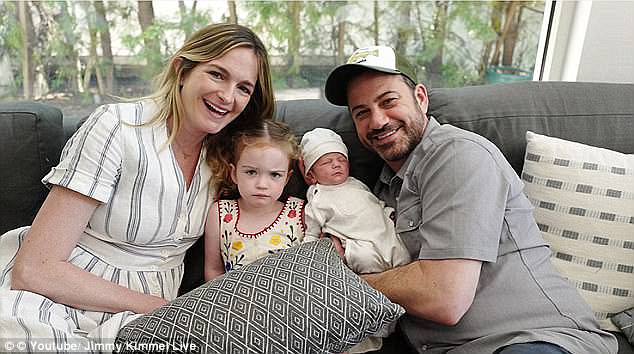 Kimmel (seen above with his wife, Molly, Billy, and their daughter Jane) accused Cassidy of reneging on a promise not to support legislation that would deny coverage to those insured under Obamacare 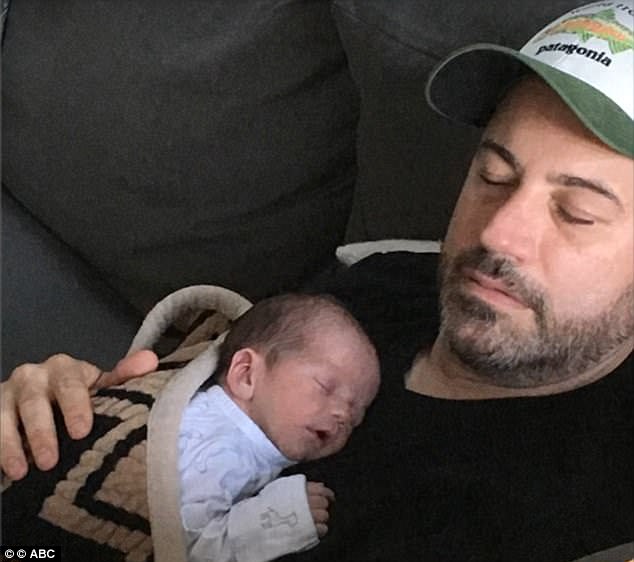 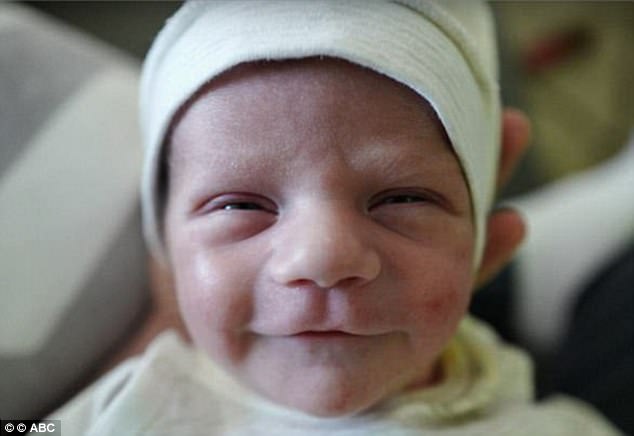 Three hours after he was born, a sonogram revealed that a pulmonary valve in Billy’s heart was completely blocked. Now the comedian says his son is doing well 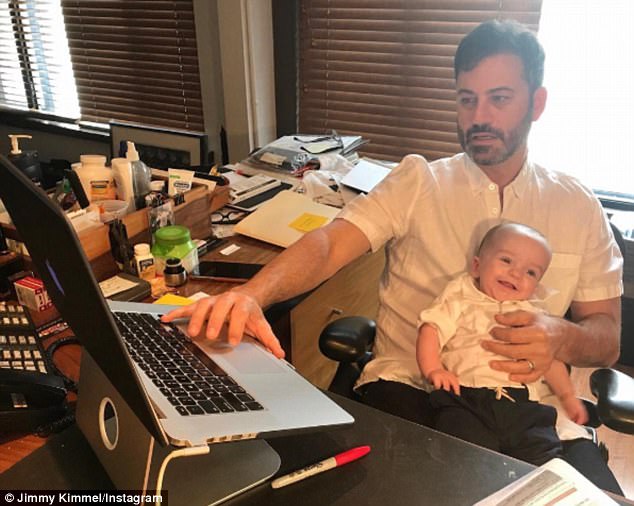 ‘Senator (Doctor) Bill Cassidy is a class act who really cares about people and their Health(care), he doesn’t lie-just wants to help people!’ the president tweeted.

On Twitter, Kimmel replied: ‘That’s great news Mr. President! Does that mean he’ll vote against the horrible bill he wrote?’

On his Wednesday show, Kimmel responded to Cassidy again.

‘Oh I get it, I don’t understand because I’m a talk show host right?’ Kimmel said.

‘Which part am I not understanding? Or could it be that I do understand and that you got caught with your GOPenis out?’

Kimmel went on to say that he ‘doesn’t want to turn this into a Kanye and Taylor Swift-type situation’ – a reference to rapper Kanye West and pop singer Taylor Swift.

The two have been engaged in a public feud for years.

Kimmel then compared the bill being proposed by Republicans to an errant baseball pitch.

‘[Cassidy] made a pitch that looked pretty good at first….but then it took a dangerous turn – and hit us right in the nuts,’ Kimmel said as he narrated video footage of a baseball pitcher hitting a batter with a ball.

The late-night host, who was visibly angry on Wednesday, continued: ‘He made a total about face. Which means he either doesn’t understand his own bill – or he lied to me.’ 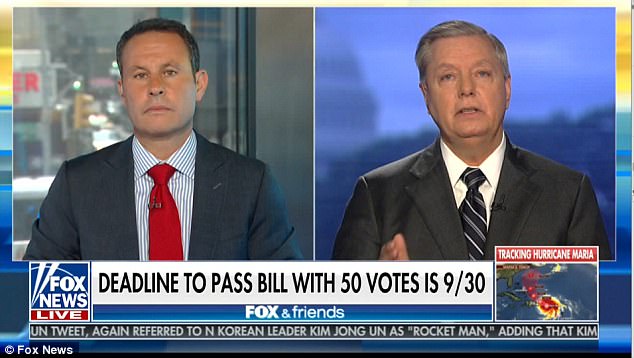 The clip shows Kilmeade taking Kimmel to task for Tuesday’s criticism of Cassidy.

He accused ‘Hollywood elites like comedian Jimmy Kimmel for pushing their politics on the rest of the country.’

Kimmel responded by blasting Kilmeade, whom he calls ‘particularly annoying’ because he ‘kisses my ass’ whenever they meet as if he were ‘a little boy meeting Batman.’

‘He’s been to the show; he follows me on Twitter; he asked me to write a blurb for his book which I did; he calls my agent looking for projects,’ Kimmel said of Kilmeade.

‘And you know, the reason I’m talking about this is because my son had an open heart surgery, then has to have two more, and because of that, I learned there are kids with no insurance in the same situation.

Kimmel also takes aim at one of the main co-authors of the Graham-Cassidy bill, South Carolina Senator Lindsey Graham.

Earlier on Wednesday, Graham ‘lashed out at me for not calling Senator Cassidy before I went on the air – I guess to give him a chance to lie to me again over the telephone,’ according to Kimmel.

The ABC host said he would not be as harshly critical toward Graham because ‘he is one of the few Republicans who stands up to Donald Trump’ and he ‘happens to look a lot like my Grandma Jane, who is now deceased.’

In the past 24 hours, Kimmel has emerged as a hero in the eyes of liberals who want to see the latest Republican effort to repeal Obamacare defeated.

Conversely, conservatives have ripped Kimmel for using his platform to promote his political views.