‘Goodbye’s too good a word, babe,’ Bob Dylan famously sang, ‘so I’ll just say fare thee well.’ Joan Baez, the folk legend who was once Dylan’s lover, has called her final tour Fare Thee Well – perhaps because, like so many singers, she’s finding that goodbye is too hard a word.

The tour came here last spring, with Baez insisting that 2018 would be ‘my last year of formal extended touring’. Her reasoning was straightforward: ‘I can’t do s*** in the upper range any more.’

At the Albert Hall, she filmed the crowd on her phone but didn’t say goodbye, because she had already added more dates. Her London swansong is now set for the Palladium on March 1. 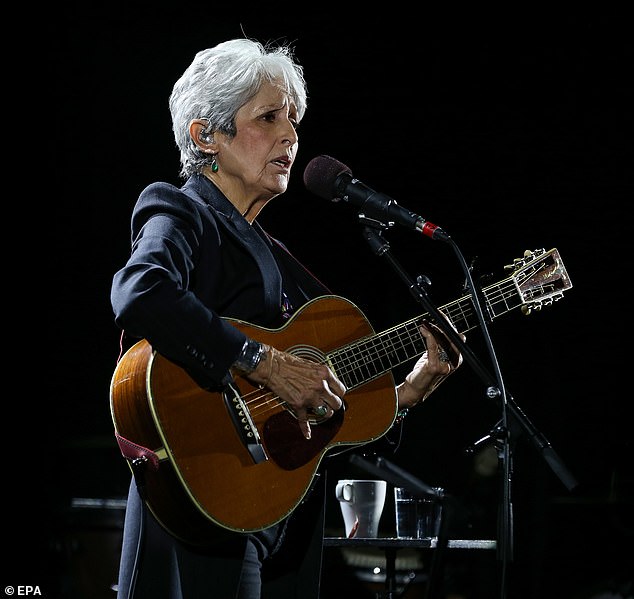 Singing some of the best hits from Bob Dylan, Tom Waits and Kris Kristofferson, as well as her own work, Joan Baez received four well-deserved standing ovations in Paris

At 78, she doesn’t look a day over 70, and her singing still sparkles. She opens with two songs by Dylan and two by Tom Waits. Like both, she has decades of wisdom built into her voice. Unlike them, she can manage most of the notes.

She moves easily from the clarion call of The Times They Are A-Changin’ to the plaintive defiance of Waits’s Last Leaf.

Baez’s audience, like her, is silver-haired. Paris seems to have a special affection for her – she has done 15 nights at the Olympia on this tour.

She varies the sound throughout, starting alone with her guitar, sometimes duetting with her guitar tech Grace Stumberg, often deploying the subtle touch of Gabe Harris on drums and Dirk Powell on guitar. Harris happens to be Baez’s son.

Dylan’s It Ain’t Me Babe is beautiful. Kris Kristofferson’s Me And Bobby McGee is gently stirring. Baez’s own Diamonds And Rust, about her time with Dylan, is bittersweet (‘you who are so good with words, and at keeping things vague’).

Zoe Mulford’s The President Sang Amazing Grace, released in 2017, could be from another age, whereas Woody Guthrie’s Deportee, written in 1948, is all too topical.

The one misfire is Dylan’s A Hard Rain’s A-Gonna Fall, but it’s just a blip on the way to a fitting finale. Throwing herself into Dylan’s Forever Young, John Lennon’s Imagine and Paul Simon’s The Boxer, Baez receives four standing ovations. She just keeps coming back for more.

Three years after his death, David Bowie is everywhere – in the charts with the greatest hits album Legacy, in that endearing BBC documentary about his early struggles, in hearts and minds with his lovable tunes and prescient lyrics.

Attempts to stage a Bowie gig without the man himself have been decidedly patchy, until now.

Seu Jorge, who turned Bowie’s hits into Brazilian folk songs for the 2004 film The Life Aquatic With Steve Zissou, is performing them with an orchestra, and it’s magical. 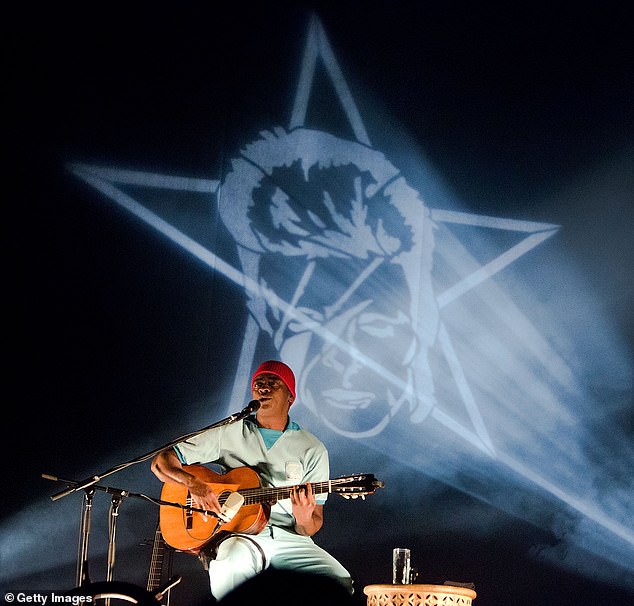 The Heritage Orchestra, based in East Sussex, have an unusual rule: they avoid the classical repertoire. Some of the violinists even wear leather trousers. Disdaining the standard layers of strings, they play like a folk big band, with the French horn shining out.

Before The Life Aquatic, Jorge knew only two Bowie songs: This Is Not America and Let’s Dance. ‘Black guys in Brazil,’ he tells an adoring crowd, ‘don’t listen to rock ’n’ roll.’ Then he heard Changes. ‘That blew my mind. So beautiful!’

Sitting down throughout, he strums his guitar and sings in Brazilian Portuguese. His voice is deep, warm, underdone: nothing like Bowie but gently riveting. Changes, Starman, Rebel Rebel and Five Years are just sublime.

I hope he’s booked for Glastonbury. 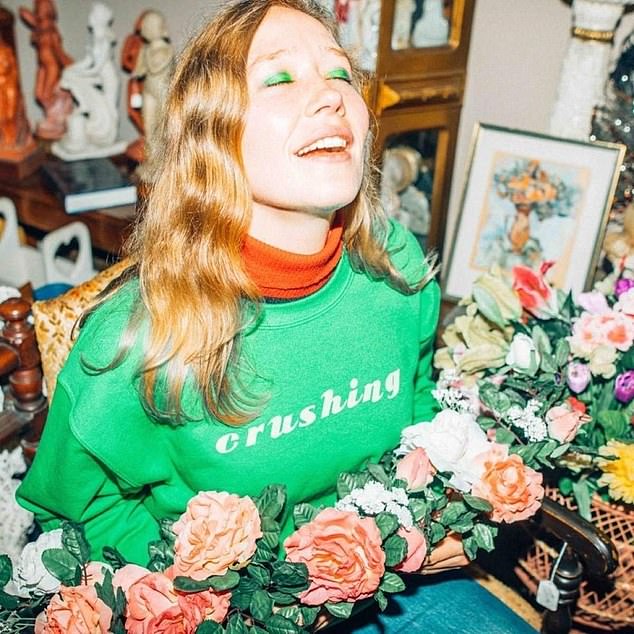 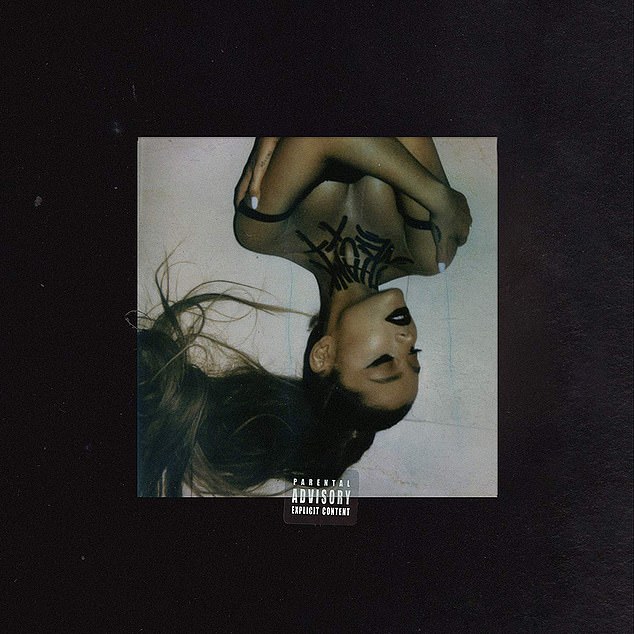 Ariana Grande’s second album in six months may well consolidate her status as the world’s biggest star, putting her smart, candid perspective at the heart of a dozen diverse, state-of-the-art songs that aren’t scared to get genuinely personal, and don’t mind cutting across her sainted image, as on saucy closer Break Up With Your Girlfriend, I’m Bored 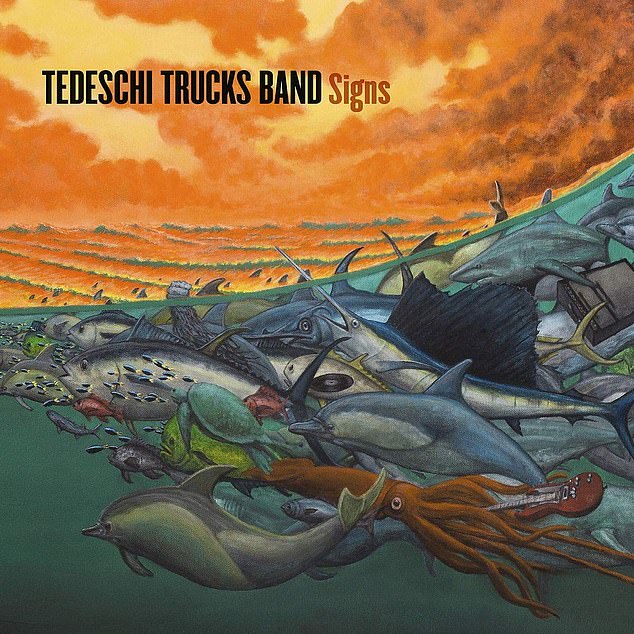 There’s nothing new about this – soulful, southern blues-rock directly descended from groups like The Allman Brothers Band, for whom guitarist Derek Trucks played for years – but it’s done well. Trucks’ guitar-playing is unusually listenable, while wife Susan Tedeschi can as easily evoke Joni Mitchell as Bonnie Bramlett 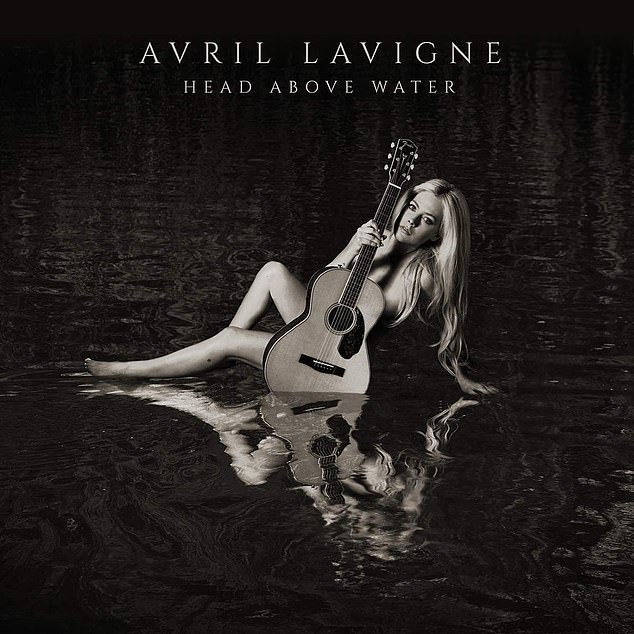 Avril Lavigne is forever fixed in time as the stroppy Canadian teen of Noughties hits such as Sk8er Boi, but Head Above Water focuses on redemptive ballads and love songs. Sassy rap-rock noisemaker Dumb Blonde and thrill-seeking strummer Bigger Wow hark back, but Warrior and the title track find Lavigne parking her skateboard unexpectedly on Celine Dion’s lawn