Ms Haydon stood out from the blue-clad crowd in her vibrant hot pink dress as she exchanged laughs and smiles with President Macron and his wife Brigitte, in stark contrast to the frosty reception he gave former prime minister Scott Morrison.

At one stage, the French President kissed Ms Haydon’s hand, who also laughed and joked with his wife as they stood on the steps of the Elysee Palace.

The meeting was a diplomatic coup to repair the fractured relationship after Mr Morrison’s surprise decision to dump Australia’s $90 billion submarine contract with France last year.

The move prompted President Macron to accuse Mr Morrison of lying to him over the deal, and led to an embarrassing leak of private text messages which threatened to spark an international incident.

But the change in Australian government has won over the French, with President Macron declaring Mr Albanese was ‘not responsible’ for the submarine debacle. 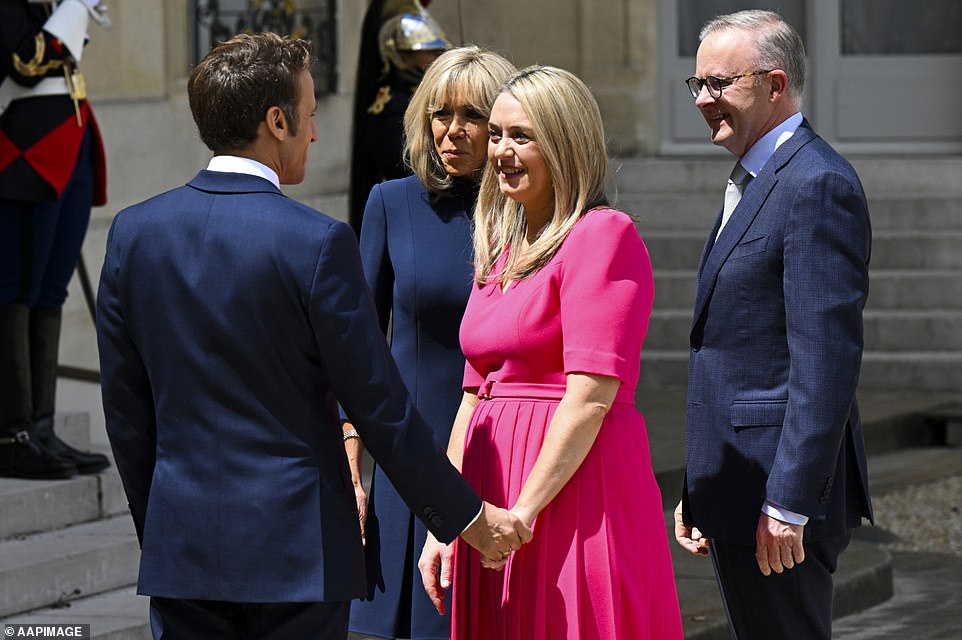 Prime Minister Anthony Albanese’s partner Jodie Haydon seemed to be on a mission to charm their French counterparts, holding hands with President emmanuel Macron at one point

Mr Macron also dismissed speculation about demands for Australia to apologise for the scrapped deal, insisting the relationship was now moving forward.

‘He’s not responsible for what happened,’ President Macron said.

‘We speak of the future, not the past.’

Mr Albanese declared ‘a new start for our countries’ relationship’ and said he was proud to stand alongside Mr Macron ‘to commit to deepening our collaboration in defence and security, resilience and climate, and education and culture’.

‘Australia’s relationship with France matters. Trust, respect and honesty matters. That is how I will approach our relations,’ he added. 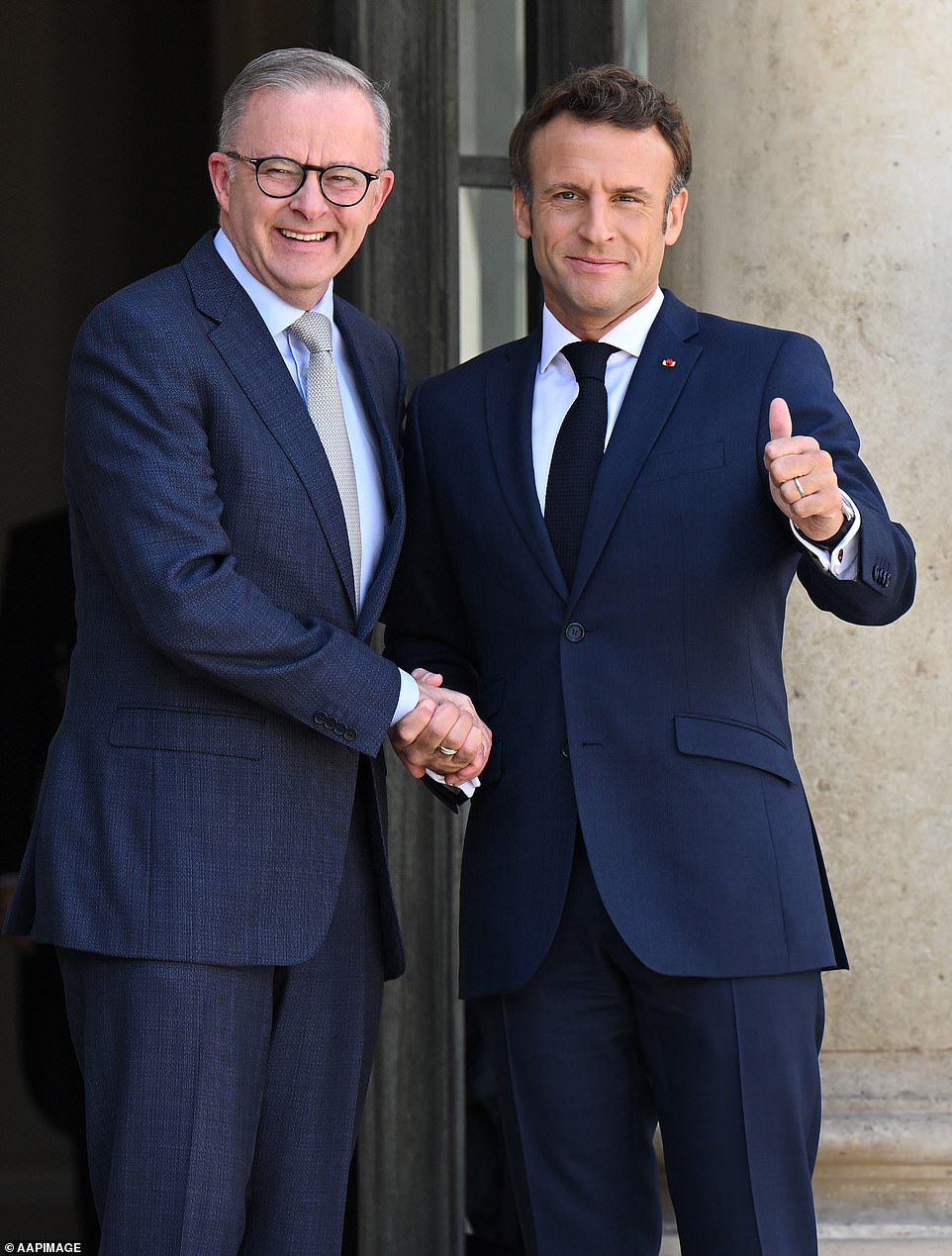 Emmanuel Macron declared Anthony Albanese ‘is not responsible’ for the submarine debacle. When asked if Australia should apologise for the scrapped deal, Mr Macron said the relationship was moving forward 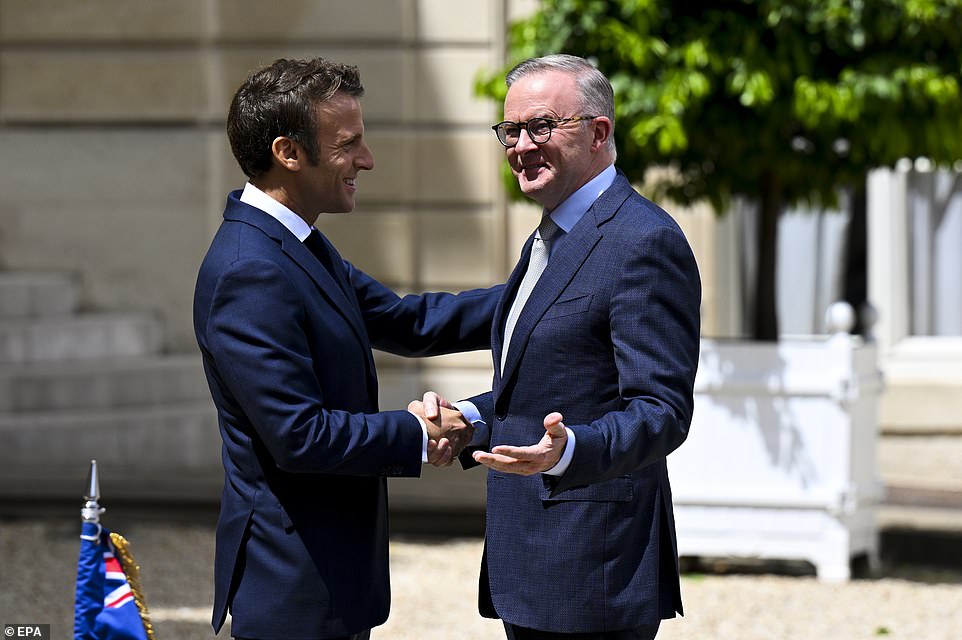 Relations between Emmanuel Macron and Anthony Albanese were clearly warm with the leaders sharing backslaps, handshakes and smiles as they greeted each other outside the official residence of the French president 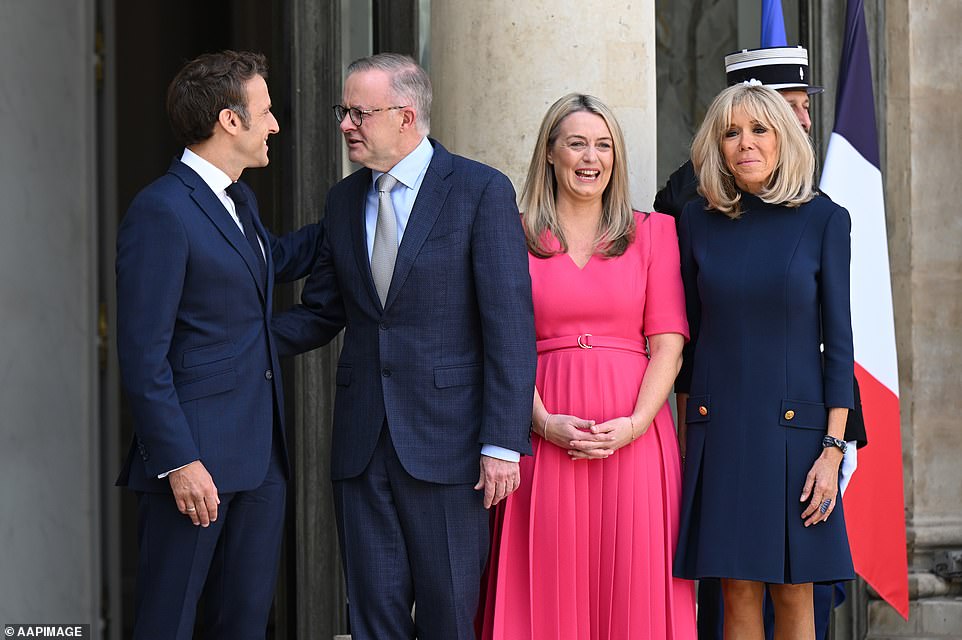 The PM had earlier not ruled out making a humbling formal apology to Mr Macron over the submarine furore, declaring ‘everyone should be able to trust me’.

During a press conference on Thursday, Mr Albanese didn’t directly answer a question when asked if he would say sorry to France over the cancelled contract.

‘I look forward to having a constructive relationship with President Macron,’ he said.

‘I’ve made it very clear what my position is about the way in which Australia engaged at a leadership level with friends.

‘What I want to do though is to make sure that we can move forward … It should be a relationship where we can rely upon each other … in which we can trust each other and mutually benefit.’

When asked if French businesses could trust him after the ‘betrayal’ and ‘deception’ over the submarine contract under the previous coalition government, Mr Albanese said ‘absolutely’.

The Morrison government decided to scrap the contract for 12 French submarines last year in favour of nuclear-powered submarines, as part of the AUKUS partnership with the UK and US.

Mr Macron later told Australian journalists ‘I don’t think, I know’ when asked if he thought Mr Morrison had lied to him in his handling of the issue. 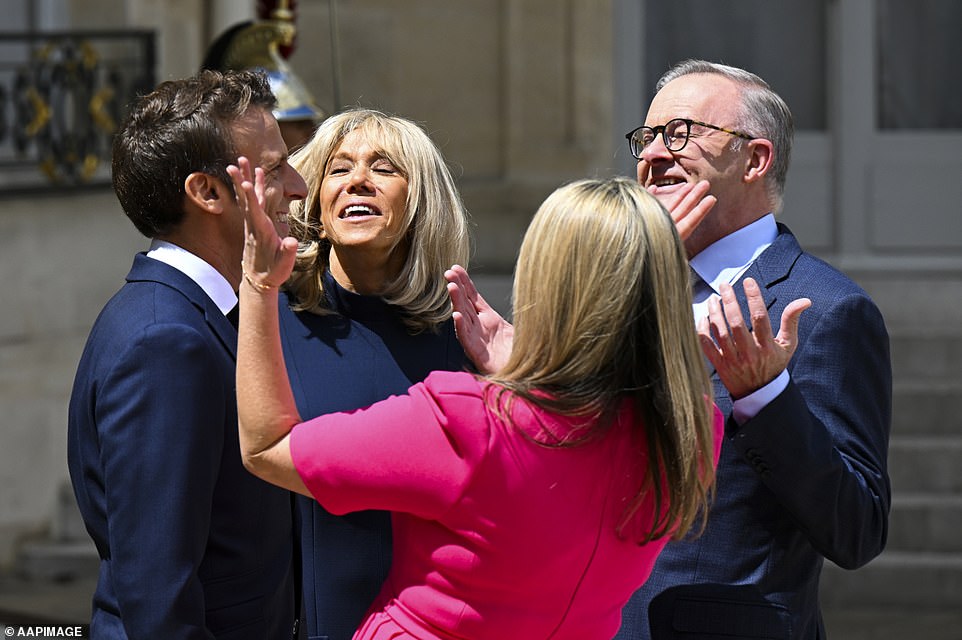 Relations between Emmanuel Macron and Anthony Albanese, as well as their partners, appeared to be very warm during the meeting 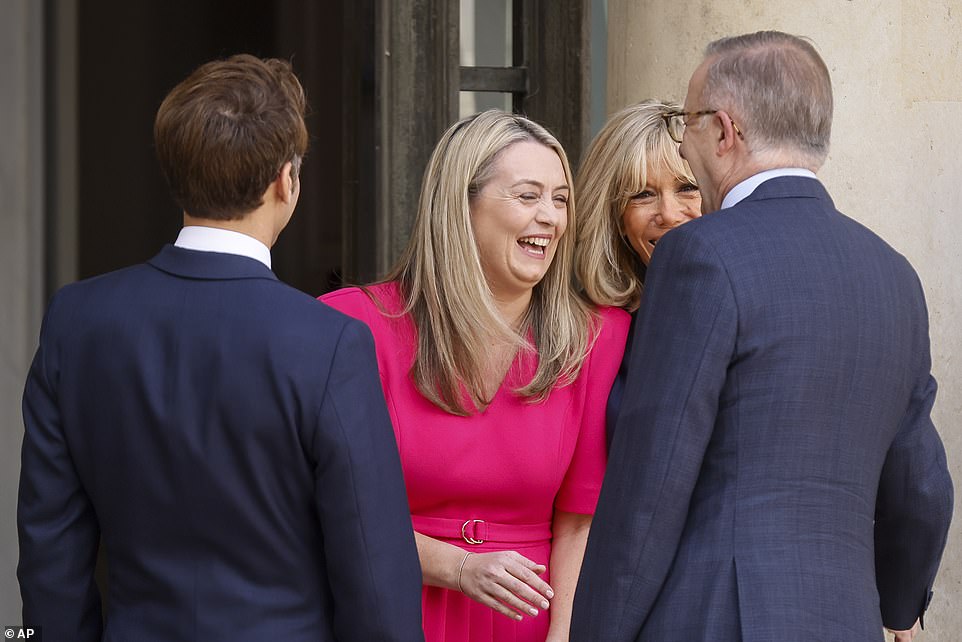 Jodie Haydon laughs as she shares a joke with Anthony Albanese, Emmanuel Macron and Brigitte Macron as the foursome met in Paris Friday 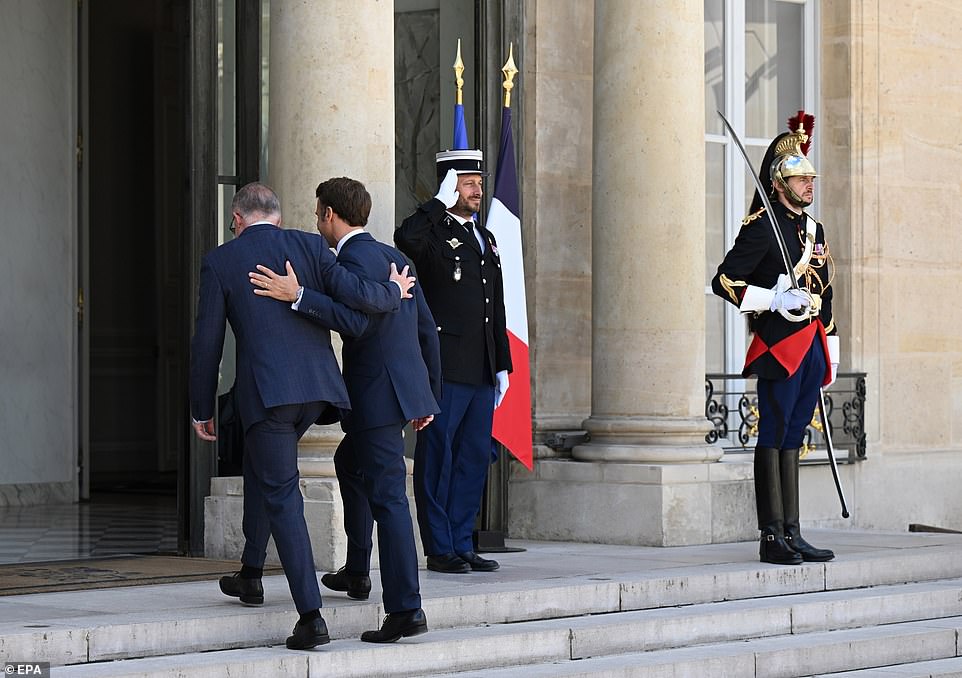 Earlier Anthony Albanese didn’t rule out formally apologising to Emmanuel Macron over the submarine furore, declaring ‘everyone should be able to trust me’

In his first phone call with his new Australian counterpart after the May election, Mr Macron reminded Mr Albanese of what Paris described as a ‘severe breach of trust’.

The Australian government will pay French shipbuilder Naval Group $835 million as part of a final $3.4billion compensation package over the decision to tear up the subs contract.

The Prime Minister said he would also discuss a free trade deal with Europe during his meeting with Mr Macron, and that the two leaders would have ‘more to say’ afterwards. 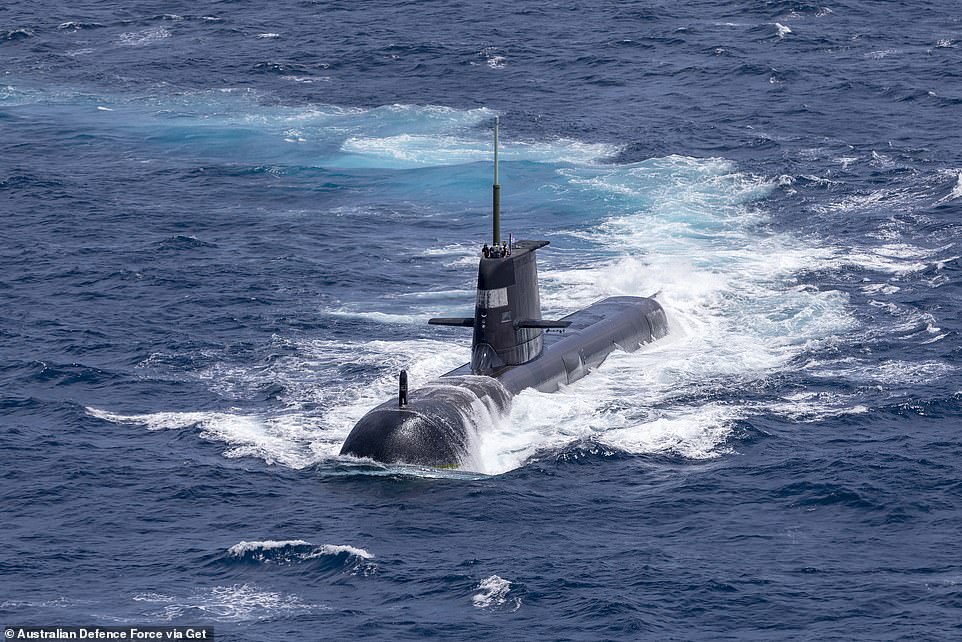 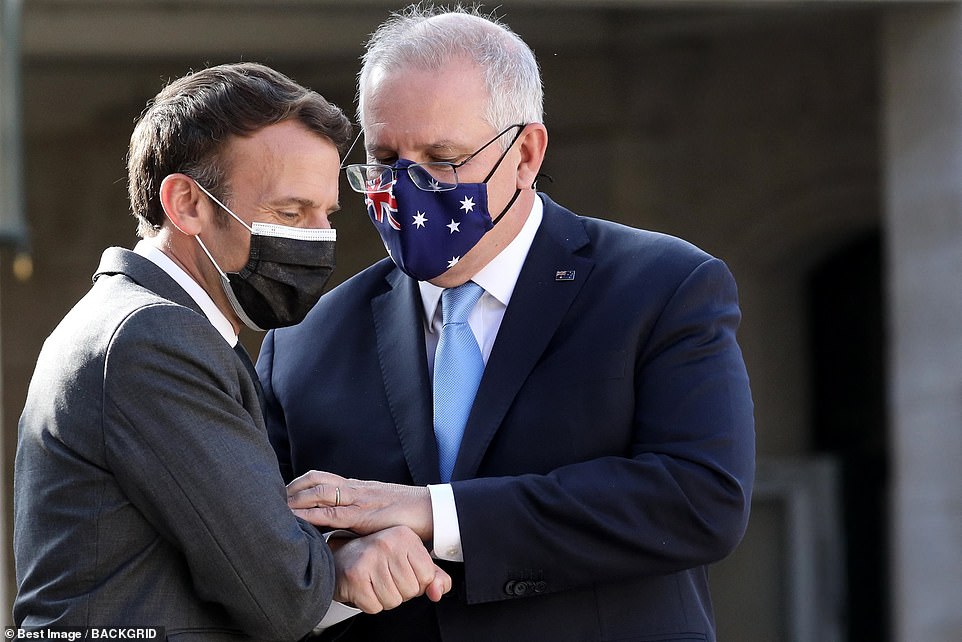 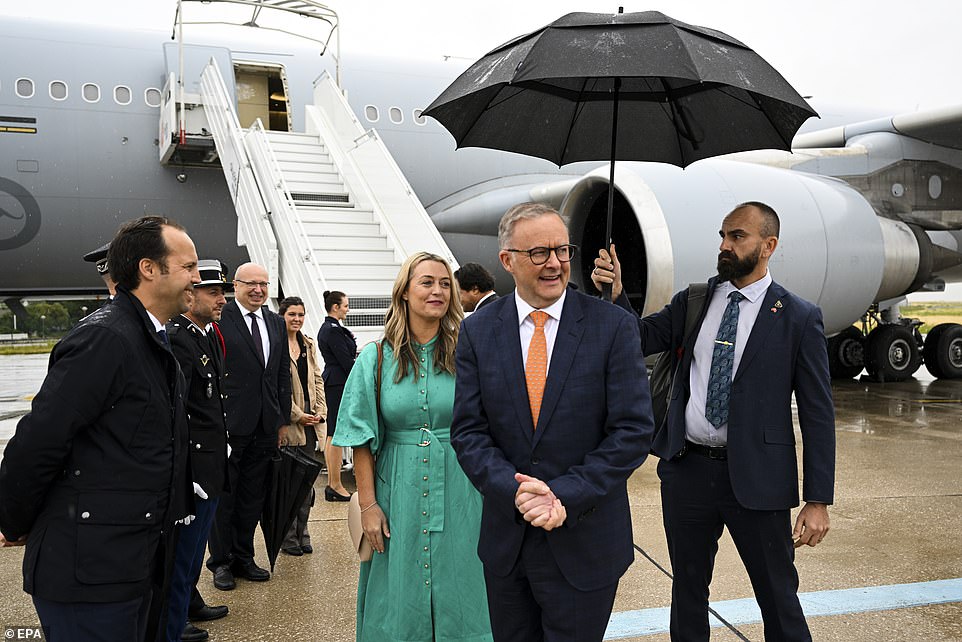 The fractured relations between the nations are one of two reasons negotiations for the trade deal have stalled, the other being a lack of climate change action by Australia.

Meanwhile, Mr Albanese is awaiting security advice on whether he can safely visit the Ukrainian capital, Kyiv, after an invitation by President Volodymyr Zelenskiy.