John Kerry raises speculation he could run in 2020

Former Secretary of State John Kerry, who ran for president as a Democrat in 2004, didn’t lock the door on whether he would run again.

Co-host Joe Scarborough pointed out that Kerry didn’t utter a firm ‘no.’

‘You’re a troublemaker,’ the former secretary of state and longtime Massachusetts senator replied back. 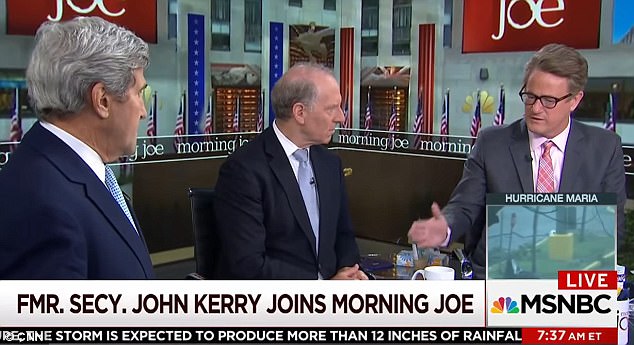 Kerry had been the Democratic nominee 13 years ago when Republican President George W. Bush was running for re-election.

A year into the Iraq War, Kerry’s experiences as a veteran of the Vietnam War and as a  longtime US senator were supposed to give him a boost with voters.

Instead, the group Swift Boat Veterans for Truth ran a number of unsubstantiated attacks ads, discrediting Kerry’s military record and calling attention to his role in the Vietnam War protest movement in the aftermath of his service.

Kerry moved on from the election by staying in the Senate and then later, after Hillary Clinton left the position under President Obama, he became the administration’s second secretary of state.

With the next presidential election more than three years away, Democrats are already expected to have a big bench of candidates, from more seasonsed like Sen. Bernie Sanders, I-Vt., to newbies like Sen. Kamala Harris, D-Calif.

Kerry has seemingly moved back into the political world with this Wednesday morning TV hit and an appearance last week at the Kennedy Center in Washington, speaking about Ken Burns’ latest docu-series, the Vietnam War.

The ex-nominee, still, would be an unusual pick for Democrats in 2020.

The last time a presidential candidate who lost in the general election was re-nominated by his party was Richard Nixon in 1968.

Nixon had won the Republican nomination in 1960 too, though lost the White House to Democrat John F. Kennedy.

Both Republican nominees Mitt Romney and Sen. John McCain, R-Ariz., had run for president before, though lost in the primaries, winning the nominations in 2012 and 2008, respectively.

Democrats, on the other hand, usually nominate fresh blood – with the notable exception being Hillary Clinton in 2016, who had lost the nomination to President Barack Obama in 2008.