Jumping for six minutes a week can give you stronger bones, study finds

Jumping for six minutes a week can give you stronger bones, study finds

Older women may be able to reduce their risk of osteoporosis with six minutes of simple jumping exercises every week.

Leaping up from the ground or off a box were found by sports scientists to put enough force and strain on leg and hip muscles to prevent bone thinning that occurs with age.

Dr Gallin Montgomery, from Manchester Metropolitan University, who tested the exercises on 14 women in their fifties, said: ‘These movements are really easy and can be completed in the comfort of your own home. Often just walking is not enough for bone health and we hope that this encourages more women to perform high-impact exercise.’

The study suggested 30 jumps three times a week could be beneficial to prevent osteoporosis. Around 3.5million people in the country live with the condition but it is far more common in women [File photo]

The women in the study got the best results from ‘counter-movement jumps’ – swinging their arms up to leap off the ground.

This was closely followed by ‘box drops’ – jumping off an 8in box – and ‘heel drops’, which involve tiptoeing to your maximum height before dropping on to your heels.

The study did not measure bone density but the impact of landing on the floor during the exercises was significant.

Combined with the strain on the women’s muscles, measured by electrodes, this is believed to be enough to strengthen bone. Similar measurements of muscle impact and force have been seen in previous studies.

Dr Montgomery said the effects of the exercises equate to a net gain of around 2 per cent bone mineral density a year, which could be enough to ward off osteoporosis. 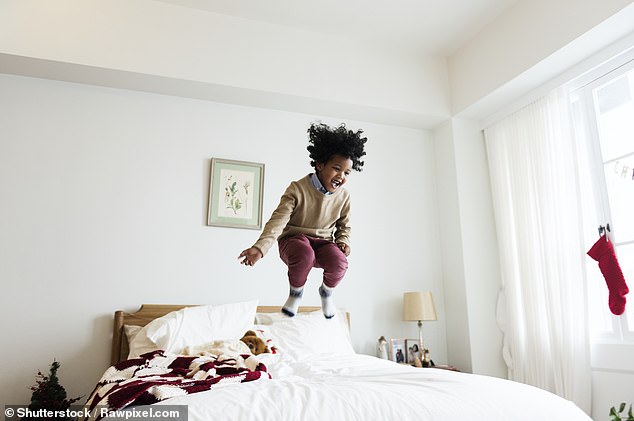 Around 3.5million people in the country live with the condition but it is far more common in women, particularly around the time of the menopause.

More than one in five women over 50 have osteoporosis, compared with almost 7 per cent of men. Half of women over 50 will break a bone because of the condition, which is also known as ‘brittle bone disease’.

Although exercise is known to help strengthen bones, middle-aged women, facing the demands of work and caring for children and elderly parents, often have little time to do it. High-impact exercise requires the bones to do more, so stimulates growth cells.

The women who participated in the study, published in the Journal of Electromyography and Kinesiology, did one jump every four seconds, then swapped to having a longer rest, performing a jump every 15 seconds.

The study suggested 30 jumps three times a week could be beneficial to prevent osteoporosis. ‘It would take women two minutes with a shorter rest time to complete them,’ said Dr Montgomery.

Experts suggest that older people who are concerned about their health should talk to a doctor before starting new exercises.