Kanye West doubles down on support for Trump in MAGA hat

He’s the new poster boy for conservative movement and doubled down on his support for Donald Trump by stepping out in a Make America Great Again hat on Friday.

But Kanye West admits he hasn’t done ‘enough research’ when it comes to politics.

The rapper, 40, seemed to suggest his support for the president was spurred by a desire to go against the tide. (Many of his close friends, and indeed his own wife Kim Kardashian, do not support Trump.)

He tweeted on Friday: ‘I haven’t done enough research on conservatives to call myself or be called one. I’m just refusing to be enslaved by monolithic thought.’

Poster boy for Trump’s politics: Kanye West stepped out in a Make America Great Again had on Friday but admitted that same day that he hasn’t done ‘enough research on conservatives’

During his solo outing on Friday, Kanye also showed support for his wife by wearing a picture of her playing tennis in a bikini on his T-shirt.

Trump has publicly thanked Kanye for his support. He boasted on Friday: ‘Kanye West has performed a great service to the Black Community – Big things are happening and eyes are being opened for the first time in Decades – Legacy Stuff!’

Earlier this week, Kanye accused his close friend John Legend of trying to ‘manipulate [his] free thought’ after the singer urged him to reconsider his support for the controversial figurehead.

In a text exchange Kanye leaked on Twitter, John wrote: ‘Hey it’s JL. I hope you’ll reconsider aligning yourself with Trump. You’re way too powerful and influential to endorse who he is and what he stands for. 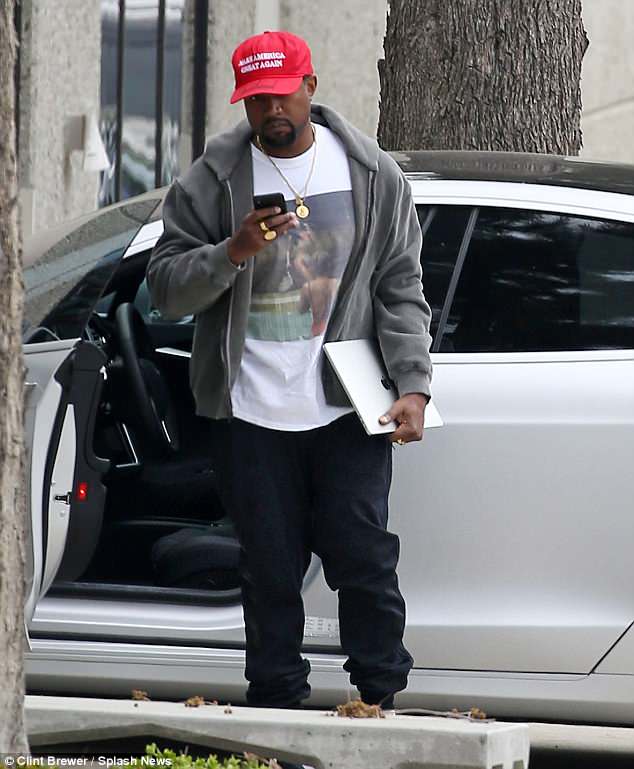 Tweet time: The rapper – who has been on a Twitter frenzy in recent days – had his phone firmly planted in his hand

‘As you know, what you say really means something to your fans. They are loyal to you and respect your opinion.

‘So many people who love you feel so betrayed right now because they know the harm that Trump’s policies cause, especially to people of color.

‘Don’t let this be part of your legacy. You’re the greatest artist of our generation.’ 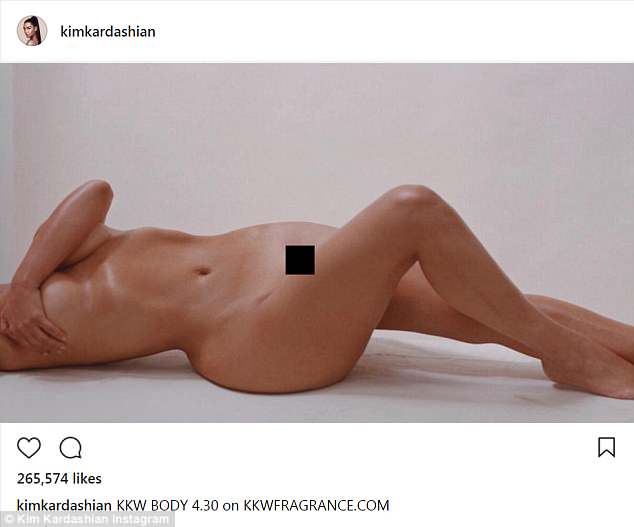 Business as usual: Kim Kardashian posted a nude shot on Instagram on Friday – her seventh naked picture in three days

Kanye replied: ‘I love you John and I appreciate your thoughts. You bringing up my fans or my legacy is a tactic based on fear used to manipulate my free thought.’

After the message went up on Twitter, John replied: ‘Think freely. Think with empathy and context too. Your words and actions have consequences. Much love. And since you’re posting texts, let me add that I have a new single out haha.’

Kanye later used his Twitter account to say he had appreciated the dialogue with the ‘Ordinary People’ hitmaker but wouldn’t be changing his mind. 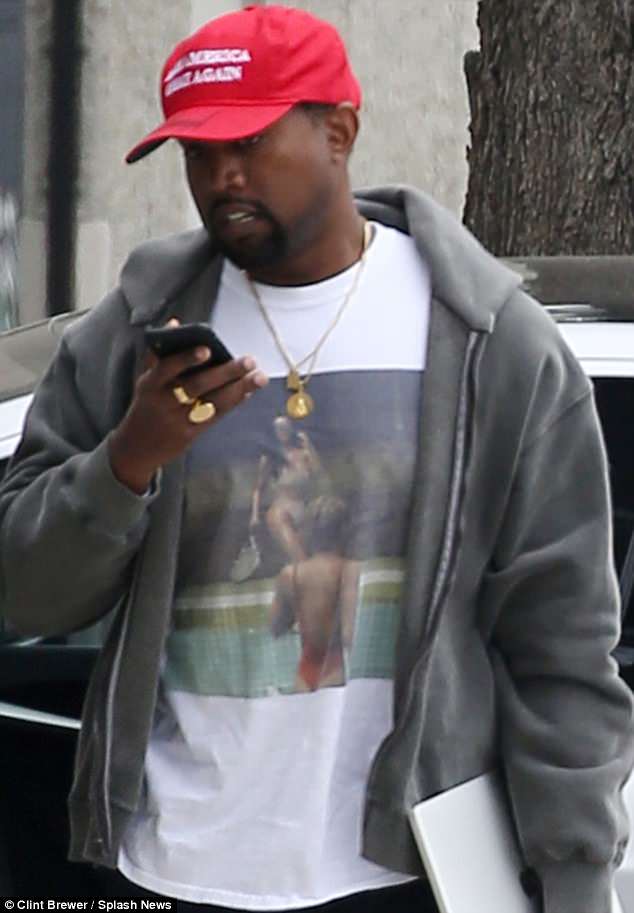 He loves Trump… and his wife: Kanye wore a T-shirt that featured a photo of Kim playing tennis in a bikini

He wrote: ‘I tweeted the John text to show that there are people around me that disagree with me and voice their opinion. I respect everyone’s opinion but I stand my ground.

‘If you feel something don’t let peer pressure manipulate you.’

And he later posted: ‘I really appreciate this dialogue with John Legend because I’m actually very empathetic. I’m still the kid from the telethon. I feel when people think of MAGA they don’t think of empathy.

‘This is year one. We can’t add empathy to MAGA by hating. We can only ad empathy with love and time and truly hearing all sides.’

John’s pregnant wife Chrissy Teigen – the mother of his two-year-old daughter Luna – later used her own Twitter account to joke about the incident with her close friend Kim.

She wrote: ‘@KimKardashian are we still doing dinner Friday or no lol.’

Alongside some crying laughing emojis and crossed-out phones, her pal replied: ‘Yes but maybe no phones.’

Kim said earlier this week that Kanye shouldn’t be ‘demonised’ for voicing his opinion.

She wrote: ‘Now when he spoke out about Trump… Most people (including myself) have very different feelings & opinions about this. But this is HIS opinion. I believe in people being able to have their own opinions,even if really different from mine. He never said he agrees with his politics

‘He’s a free thinker, is that not allowed in America? Because some of his ideas differ from yours you have to throw in the mental health card? That’s just not fair. He’s actually out of the sunken place when he’s being himself which is very expressive.’