‘Karen’ is kicked off plane for refusing to wear mask

An entire plane applauded and cheered as a ‘Karen’ who refused to wear a mask was removed from an American Airlines flight.

Passenger Jordan Slade took video of the moment the woman, who was not wearing any face covering in defiance of flight guidelines, was kicked off the flight traveling from Ohio to North Carolina on July 19.

Slade, of North Carolina, said the woman claimed she wasn’t wearing a mask because of a medical condition.

As the woman gathered her items and angrily walked off passengers clapped and hollered with joy.

When the applause broke out the woman angrily turned around and snapped back: ‘You can clap all you want.’

Jordan Blake filmed the moment a woman dubbed a ‘Karen’ was kicked off an American Airlines flight for refusing to wear a mask on July 19 on a trip from Ohio to North Carolina. As she walked away the passengers on board clapped and she snided by: ‘You can clap all you want’ 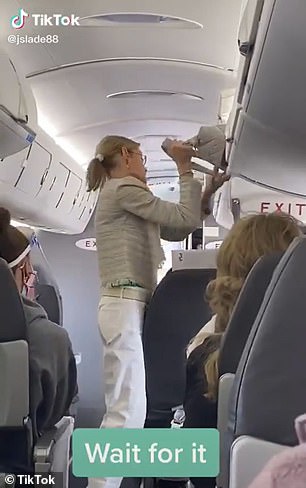 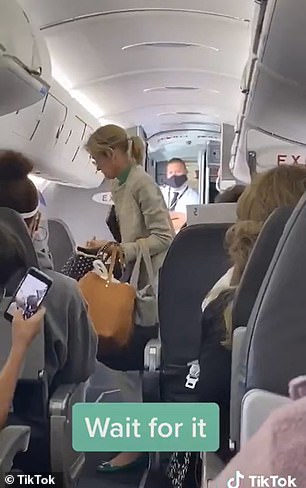 The woman claimed she wasn’t wearing a mask because of a medical condition. She demanded to be boarded on the flight first, was argumentative with flight attendants when asked to put her phone away, and refused to put on a mask 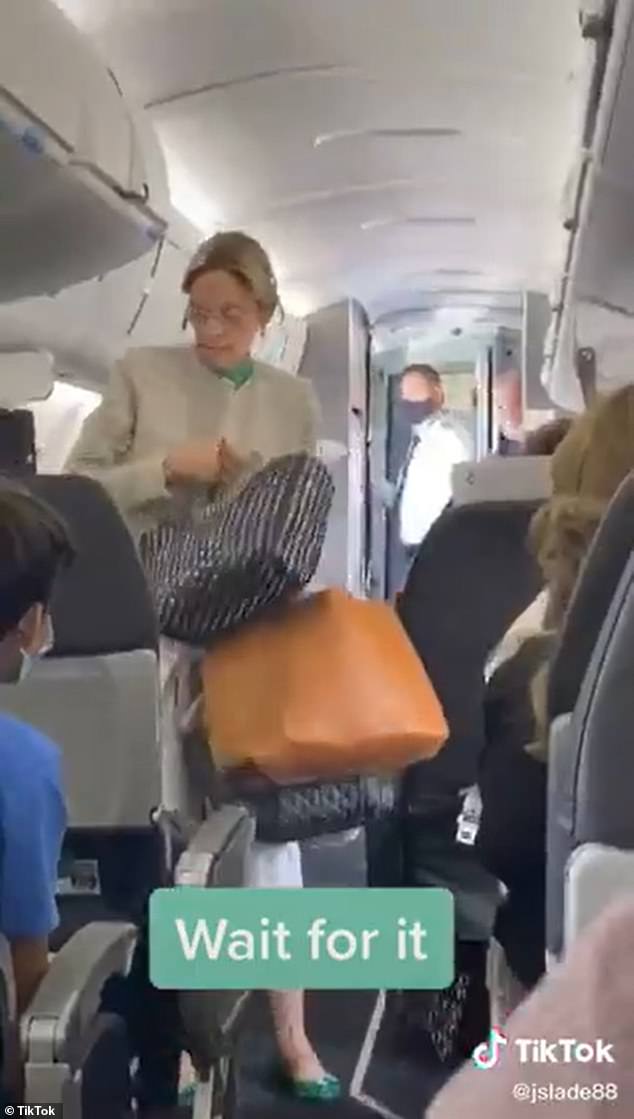 Two masked American Airlines employees were seen at the head of the plane waiting to escort the woman out as she indignantly gathered her three giant bags.

‘Just leave. We have flights to get on,’ one passenger yelled back.

‘She was argumentative from the gate. She demanded to be boarded first and was causing an obvious scene. Once boarded she was making phone calls and arguing with the attendant when asked to put her phone away,’ Slade said to DailyMail.com.

‘She also refuses to wear a mask putting others on the flight at risk… Another passenger even got up to confront her about her behavior with no mask,’ she revealed. 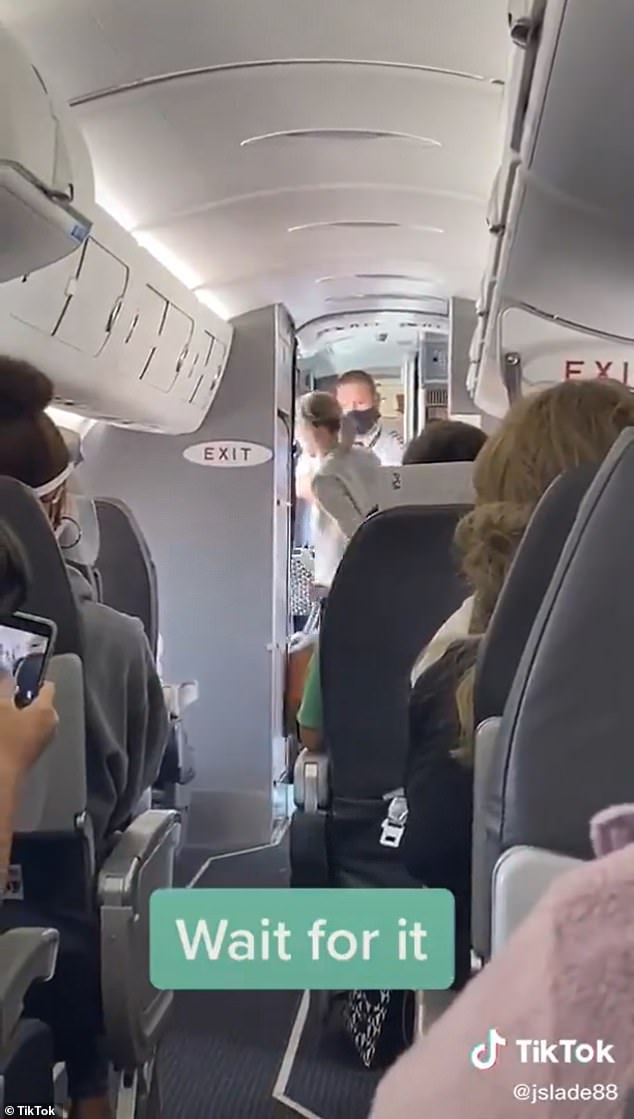 ‘Just leave. We have flights to get on,’ one passenger yelled as the woman walked off

The woman’s back and forth with attendees and refusal to wear a mask took up so much time that after she was kicked off the flight the plane had to go back to the airport to refuel.

‘A woman in the back got up from her seat and sort of confronted the attendant saying she was going to miss her connection and then directed the conversation back to the woman saying if she misses her flight because of her…’ Slade said.

‘Karen’ justified not wearing a mask to the angry customer saying she had a medical condition.

Slade said she and her friends filmed the incident because it was such a disruption to the flight. She uploaded the clip onto her Tik Tok, where it went viral.

‘Hopefully she made it to her destination and had a better day,’ Slade added. 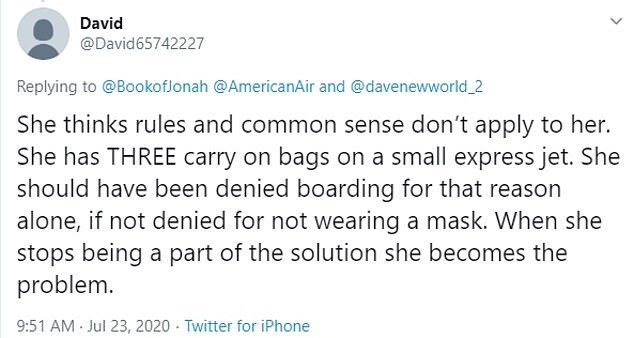 Due to the coronavirus crisis airlines have created new travel measures to prevent the spread of the contagious respiratory virus that has already infected over 3.9 million in the country and killed over 143,000.

American Airlines instated a new policy for requiring all passengers to wear face coverings except for children under two years old.

Starting July 29 passengers will be required to wear a face covering in the airport where the trip begins and where it ands and during flight connections.

‘Be sure your face covering is on before you board the plane and wear it during your flight. If you decline to wear one, you may be denied boarding and future travel on American,’ the policy says. 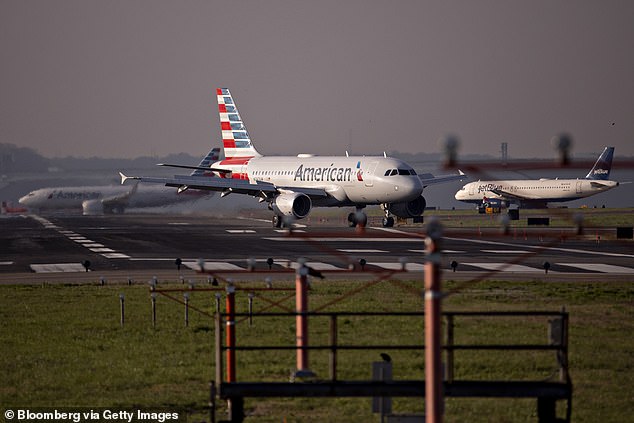 American Airlines is yet to reply to DailyMail.com’s request for comment on the incident.

Social media users were quick to slam the woman and call her a ‘Karen’ for ignoring the mask mandate and jeopardizing the health of people on board.

‘She thinks rules and common sense don’t apply to her. She has THREE carry on bags on a small express jet. She should have been denied boarding for that reason alone, if not denied for not wearing a mask. When she stops being a part of the solution she becomes the problem,’ one Twitter user said.

‘Three carry-ons and no mask. Why was she even allowed on board,’ another Twitter user added.