She is known for recycling her favourite looks, and today was no exception as the Duchess of Cambridge returned to royal duties following maternity leave.

The 36-year-old royal sported a pair of £475 boots that she has owned for 14 years as she visited the Sayers Croft Forest School and Wildlife Garden at Paddington Recreation Ground in west London.

The duchess dressed down in Zara skinny jeans and a grey jumper and kept the autumnal chill at bay in a £175 khaki jacket from trendy Swedish outdoor brand Fjällräven.

October, 2018: The Duchess of Cambridge sported a pair of £475 boots by Penelope Chilvers that she has owned for 14 years as she visited the Sayers Croft Forest School and Wildlife Garden at Paddington Recreation Ground in west London on Tuesday, pictured

She finished the casual ensemble with her trusty knee-highs from favourite brand Penelope Chilvers.

Kate was first seen sporting a pair of the distinctive brown leather boots at the Game Fair at Blenheim Palace in August 2004.

The royal was first spotted in the £475 long tassel boots at the Game Fair at Blenheim Palace in August 2004.

The then Kate Middleton had just been thrust into the spotlight after news of her relationship with Prince William first emerged.

The couple met as first-year students at St Andrews University.

September, 2016: Kate last donned the boots in public when she joined Prince William on a visit to the remote island community of Bella Bella, off the coast of Canada, during their royal tour. The boots kept the royal’s feet dry in the face of strong winds and drizzly rain 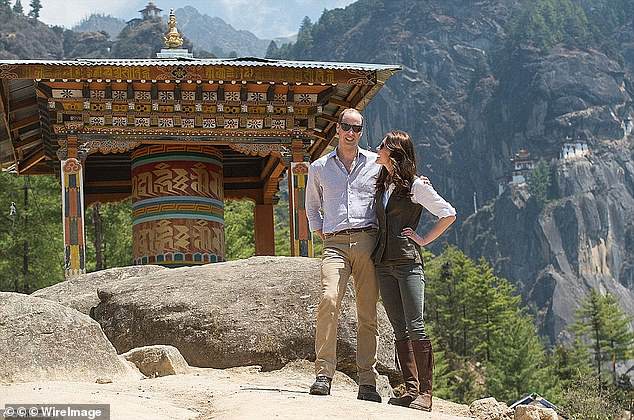 April, 2016: Posing at Bhutan’s famous Tiger’s Nest monastery, Kate beams at William. On her feet are the Penelope Chilvers boots, which she wore on the three-hour hike to the beauty spot

The boots made another appearance exactly a year later as Kate attended the Gatcombe Festival of Eventing in Gloucestershire.

On that occasion she paired them with a pair of blue denim jeans, a green v neck jumper and white shirt.

She wore a brown jacket and carried a bag in a matching colour, topping off the look with a similarly coloured trilby.

As the Duchess of Cambridge found her feet in the royal family, the boots stayed in the cupboard – at lease on public appearances.

August, 2005: Just four years after meeting William as a first-year student at St Andrews and Kate was already in the spotlight. Pictured, in the Penelope Chilvers boots, denim jeans, shirt, jumper and jacket at the Gatcombe Festival, Gloucestershire

They were next seen when Kate and William headed out for a three-hour trek in Bhutan.

Royal watchers noted how the duchess did well to finish the hike to the famous Tiger’s Nest monastery despite wearing jeans, a blouse and a khaki-coloured vest.

However her Penelope Chilvers classics were certainly comfortable enough and the royal strode ahead with her husband.

August, 2004: Kate was first spotted in the £475 brown boots at the Game Fair at Blenheim Palace in August 2004, right. News of her royal relationship had emerged shortly before

The boots once again made the perfect choice later that year when Kate and William braved the wind and rain on an outing during their royal tour of Canada in September.

Kate opted for the practical look as she and William braved the elements on the remote Canadian island community of Bella Bella.