Kids get stalked by Great White Shark in Tuncurry

Terrifying footage has emerged of a great white shark stalking children playing in the water at a popular Australian beach.

The video, posted to YouTube by The Rogue Droner on Monday afternoon, was captured by drone at Tuncurry Beach on the mid-north coast in New South Wales.

The clip shows the massive predator slowly approach a group of children frolicking in the shallows.

Unaware of the looming danger, the kids continue to play as the shark edges closer to them.

As the ominous creature circles the area as onlookers begin to take notice from a rockwall.

The video was posted along with the caption: ‘Some say hunting is hard, but for this white shark, it’s child’s prey.

‘Whilst this shark came close to the swimmers, this video shows once again these sharks are not really interested in actively “attacking” humans – they are just checking our what is in the water,’ the videographer wrote.

Social media users were fascinated by the footage, with many saying they were on the edge of their seat while watching the clip.

‘Wow! Scientifically this is pretty eye opening to how close sharks can get! Thanks dude!’ one person said.

The video, posted YouTube by The Rogue Droner on Monday afternoon, was captured by drone at a beach on the mid-north coast

‘It’s amazing to see how oblivious people in the water are of what is next to them. With that said, this video demonstrates one thing, Sharks aren’t mindless killers. If he wanted them, he would have found a way to get them, another person said.

‘Looked to me like he was playing around or something like that. Sure, he went near the kids but after that didn’t look like posing a risk.’

The footage comes just a month after a shark was captured appearing to stalk   surfers at the same beach.

Five surfers seemed oblivious to the creature as it moves within about 10 metres of them.

The drone operator told Yahoo News the shark got very close to the group but thankfully, seemed to just be cruising past.

‘It went past and then circled around for another look.’ 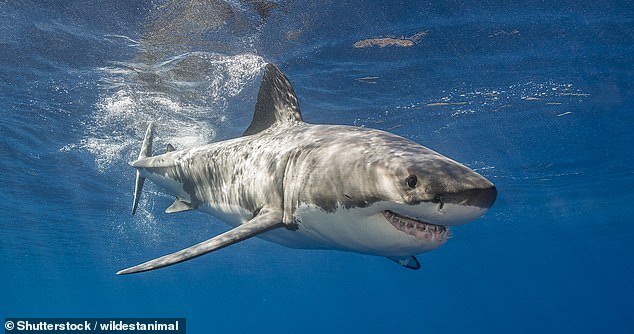 The video was posted along with the caption: ‘Some say hunting is hard, but for this white shark, it’s child’s prey’

Great white sharks have such a strong sense of smell that they can detect a colony of seals two miles away.

Great whites give birth to up to ten ‘pups’ but mothers will eat them if they don’t swim off fast enough.

They swim at up to 37mph  at full pelt and burst out of the water from below their prey.

They attack 5-10 humans every year but usually just take a ‘sample bite’ out of curiosity before swimming off.

Great whites can live to up to 70 years old.

They are coloured white underneath to make them harder to see from below with sunlight shining down.

They have several rows of teeth that can number into the thousands.

As their teeth fall out they are replaced by razor sharp teeth in the row behind.