Labs remain the country’s most popular purebred dog for a 27th year, while German shepherds and golden retrievers have hung onto the second and third spots in new American Kennel Club rankings released on Wednesday.

But Frenchies hit a highest-ever number four, and German shorthaired pointers cracked the top 10 for the first time ever.

Labs remain the country’s most popular purebred dog for a 27th year, while French bulldogs come in at their highest yet, at number four, in American Kennel Club rankings released on Wednesday. Labs Soave, age 2, left, and Hola, aged 10-month, pose for photographs as Harbor, eight weeks, takes a nap at the AKC headquarters on Wednesday in New York

The bulldog is down one in fifth, after notching a record number four ranking last year. Sixth through 10th are the beagle, the poodle, the Rottweiler, the Yorkshire terrier and the German shorthaired pointer.

Initially bred for hunting, the handsome, athletic ‘GSP’ is increasingly visible as a bomb-sniffing dog and in agility and other canine sports. A GSP also won the prestigious Westminster Kennel Club dog show in 2016.

‘They’re a dog that will do anything you want, except lay around,’ said Jeffrey Drogin, a longtime owner in New York. Pua, a 5-month old French bulldog, poses for photographers at the AKC headquarters 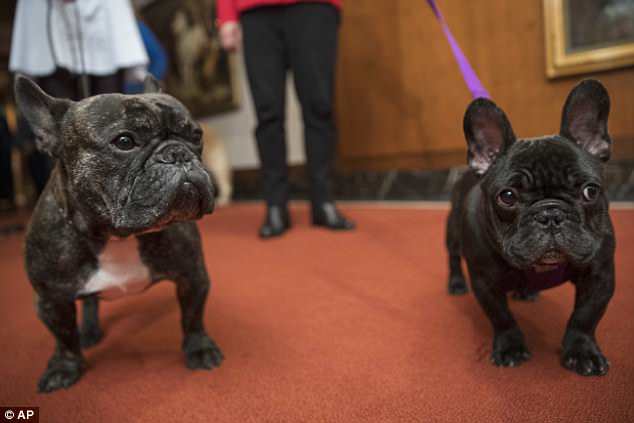 French bulldogs Louis, 3, left and Pua, 5-months pose for photographers at the AKC

The versatile, sociable Lab has had the longest-ever reign as top dog. It broke the record in 2013.

But you can’t beat the beagle for consistency. It’s the only breed to make the top 10 for every decade since the AKC’s 1884 founding.

‘It scares me that because it’s popular, everybody wants it. But not every family is right for a French bulldog,’ said Kerry Boyd, a Natick, Massachusetts-based dog handler who breeds Frenchies. 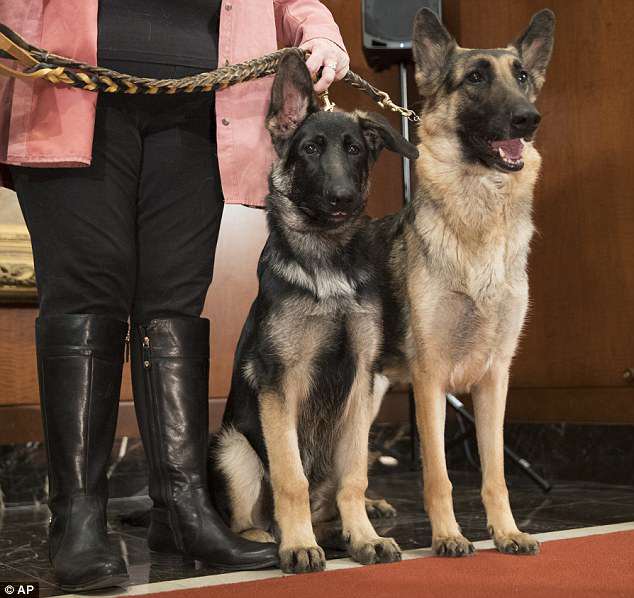 Then the breed made headlines this month when a Frenchie puppy died after a flight attendant forced it into an overhead bin.

The death stirred discussion of breathing problems in French bulldogs and other short-snout breeds (though no pets belong in overhead compartments).

Flat-faced dogs can be prone to overheating and sometimes need nasal or palate surgery. Frenchies and bulldogs also can be susceptible to certain spinal and eye problems. They are often born by cesarean section because of their big heads. 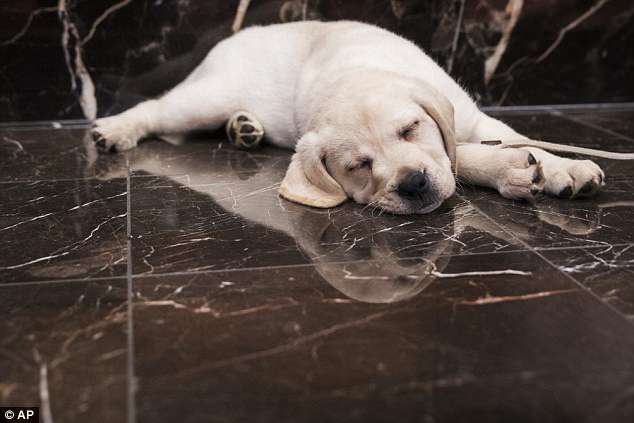 Harbor, an eight-week old labrador retriever, takes a nap during the commotion at the AKC 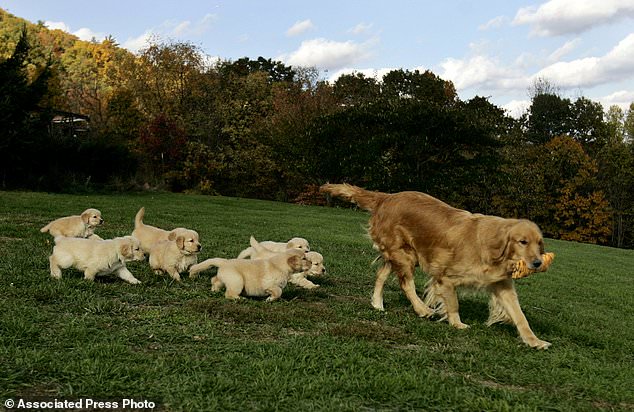 A litter of seven golden retriever puppies trots across the lawn after their mother Carley at Mountain View Kennels in Williamsburg, Pennsylvaniae on November 2, 2005

Given all that, New York’s then-newsweekly The Village Voice devoted a 2015 cover to French bulldogs and urged: ‘Don’t Buy This Dog.’

Newton, Massachusetts-based veterinarian Dr. John de Jong sees Frenchies’ problems firsthand, but he notes that other breeds are prone to conditions of their own.

‘I would say to anybody purchasing a breed of any kind: Do their homework,’ said de Jong, president-elect of the American Veterinary Medical Association.

The Siberian husky and Australian shepherd have jumped into the top 20 in the last decade, while the Chihuahua, pug and Maltese have tumbled out of the top rankings. The prize for rarest breed goes to the Norwegian lundehund, a six-toed, unusually flexible dog that historically hunted cliff-dwelling puffins. A Norwegian lundehund competes in the ring during the non-sporting group during the 142nd Westminster Kennel Club Dog Show, at Madison Square Garden in New York on February 12

The prize for rarest breed goes to the Norwegian lundehund, a six-toed, unusually flexible dog that historically hunted cliff-dwelling puffins.

The club doesn’t chart such popular hybrids as Labradoodles and puggles, nor other mixed-breed dogs. However, they can register as AKC ‘canine partners’ for dog sports.

Overall, the American Veterinary Medical Association (AVMA) estimates there are about 70 million pet dogs nationwide (and over 74 million pet cats.)

‘The aesthetic standards of the AKC can leave dogs crippled and in near-constant pain,’ People for the Ethical Treatment of Animals (PETA) wrote to the club this month.

Breeders such as Boyd say they spend thousands of dollars on testing to propagate healthy dogs. The AKC argues that breeding preserves specific traits that can help police pick K-9s or households choose suitable pets.

Whether purebred or mixed breed, ‘the most important thing is that you love the dog that’s yours and that you responsibly own it and care for it,’ said AKC spokeswoman Gina DiNardo. 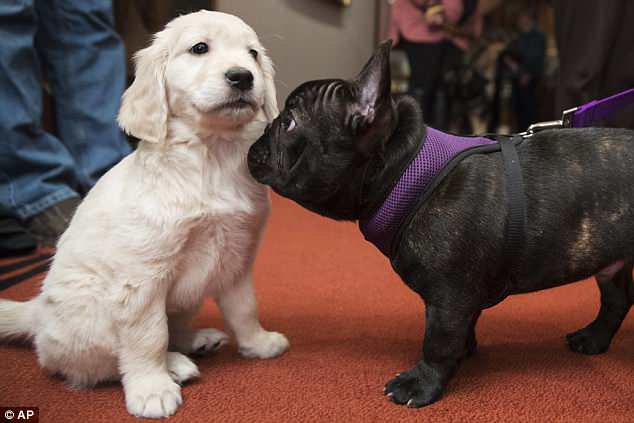