Laurie Penny was victim of a bomb threat over feminist articles

Laurie Penny, pictured at home in Leyton, has revealed the extent of the abuse she suffers online

Feminist writer Laurie Penny has revealed the torrents of online abuse she has faced as figures show one in five women are sexually harassed online.

The journalist was forced to move out of her home after being threatened with a bomb and is subjected to daily threats of rape.

The 31-year-old author has detailed the extent of the abuse in a 5,933 word essay about her personal experience.

Miss Penny, who started her career as a reporter for the socialist newspaper The Morning Star, writes regularly for The Guardian and the New Statesman about gender, feminism and politics.

Her pieces have become famous online for dividing opinion and attracting comments from trolls, who she says threaten her on a regular basis.

But in the piece published on Longreads.com, Miss Penny said she resents being called ‘provocative’ for her views and believes she is targeted for being a woman and speaking out on challenging subjects.

Miss Penny described being aged 23 and on the phone to a suicide helpline after being plagued by online trolls.

And then three years later, detailed how she was forced to leave her flat in London after police became fearful she was going to be targeted with a bomb.

She reflected: ‘You are 26 and you get your first credible bomb threat.

‘The police advise you to leave your flat. You hide out in an ex-boyfriend’s front room. You’re scared, which people can deal with, and angry which they can’t.’ 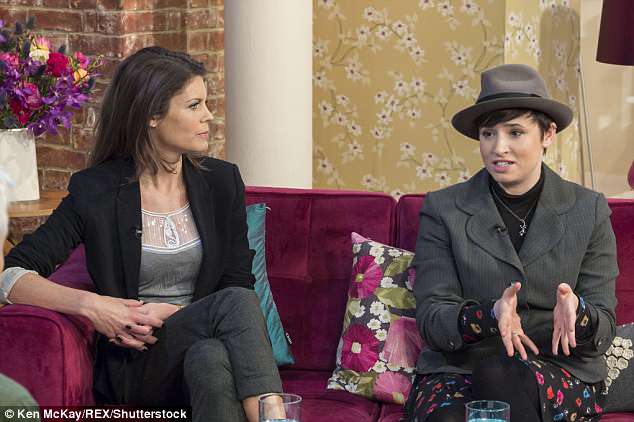 Troubled: Laurie Penny, pictured right on This Morning in 2013, describes how the abuse has made her angry and anxious

Her essay comes after Amnesty International published their latest research which shows one in five women in the UK have suffered online abuse or harassment.

Almost half of women said the abuse or harassment they received was sexist or misogynistic, with a worrying 27% saying it threatened sexual or physical assault.

Young women are especially affected, with one in three polled saying that they have experienced online abuse.

Laura Bates, founder of the Everyday Sexism Project – an online initiative to catalogue instances of sexism – said of the research: ‘We are seeing young women and teenage girls experiencing online harassment as a normal part of their existence online.

‘Girls who dare to express opinions about politics or current events often experience a very swift, misogynistic backlash. This might be rape threats or comments telling them to get back in the kitchen.

‘It’s an invisible issue right now, but it might be having a major impact on the future political participation of those girls and young women. We won’t necessarily see the outcome of that before it’s too late.’