The pilot killed alongside his long-term girlfriend as he guided a helicopter away from a packed football stadium had been ‘living the dream’ working for dignitaries and travelling the world with his soulmate.

Mr Swaffer and Ms Lechowicz were both professional pilots who had been in a relationship for some ten years during which time they travelled far-flung destinations together.

The ‘soulmates’ came together in what friends described as an ‘aviation love story’ and had recently bought their first home, a £1.2million property in Surrey.

Buddhist Mr Swaffer studied at Brighton College and worked for Easyjet early in his career before going on to work as a private pilot for dignitaries around the world.

In a career spanning more than two decades he flew helicopters for live media broadcasting including ‘The Big Breakfast’ and the Virgin Radio traffic helicopter, and had flown the Dalai Lama and members of the royal family.

Mr Swaffer, who has been hailed a hero for guiding the helicopter away from crowds, once said in an interview: ‘safety and reliability is everything to me.’ 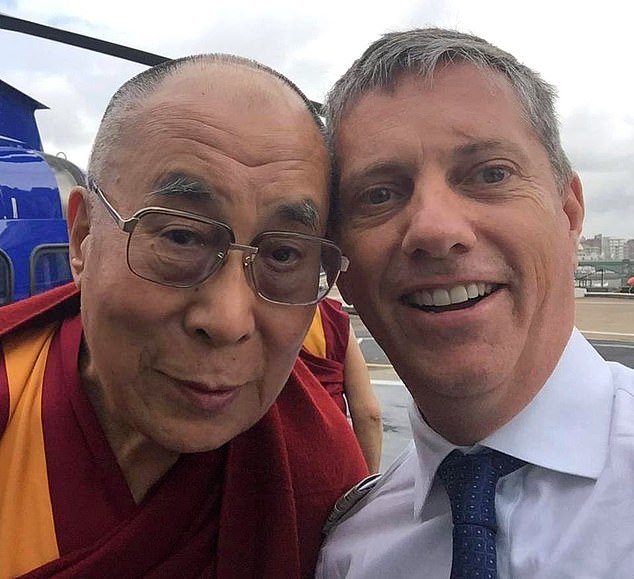 Pilot Eric Swaffer pictured with the Dalai Lama. Mr Swaffer had more than 20 years’ experience as a pilot 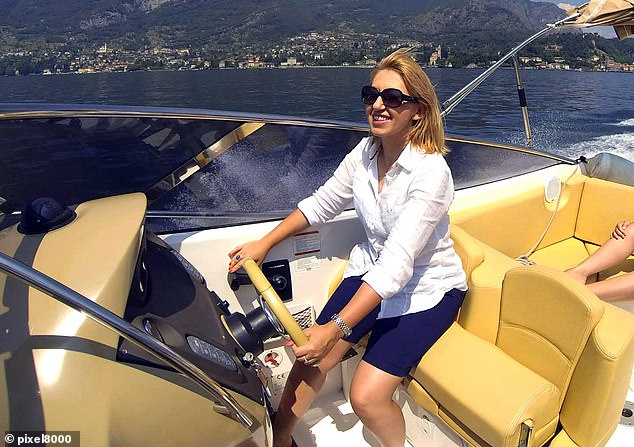 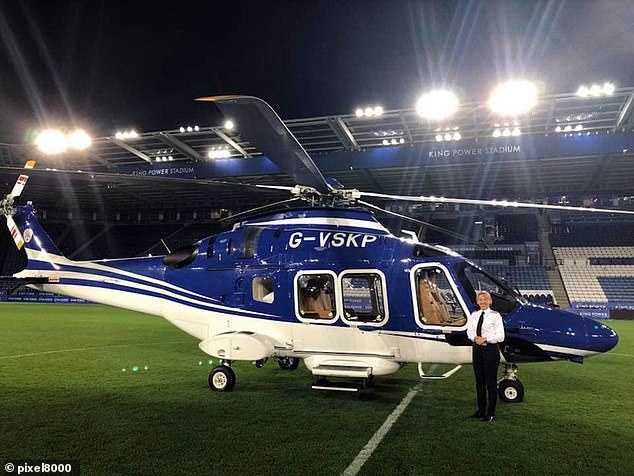 Ms Lechowicz, who moved to the UK from Poland in 1997, was selected by her country’s London embassy as one of 18 exceptional Polish women who inspired the community in the UK for being a pilot

In an interview with Private Fly, Mr Swaffer said he ‘developed an interest in aviation as a child following a flight deck visit’ and he started out as a sponsored Bristow Helicopters cadet.

He told the interviewer he drove as Audi A4 because ‘in driving, as in flying, safety and reliability is everything to me.’

Mr Swaffer was at the controls of the aircraft when it crashed in a car park just metres from the King Power Stadium on Saturday evening. 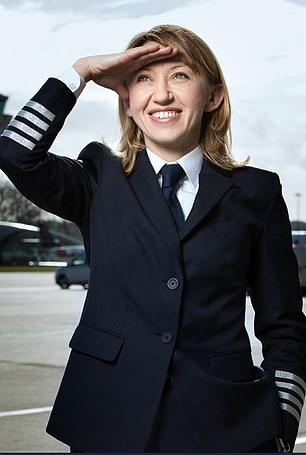 Witnesses said he was a hero for guiding the spinning helicopter away from crowds on the ground.

Lucie Morris-Marr, who was friends with Mr Swaffer for 18 years, said he would have done all he could to prevent lives being lost in the incident.

Describing him as ‘extremely funny, charming and cheeky with a wicked sense of humour’, she said: ‘Everyone loved him. I’m not surprised the chairman hired him. He was always great company.

‘I would always ask him about his famous clients but he was so discreet which is why they hired him, of course.

‘He was so generous and kind to his friends – when I lived in London he once flew us in a helicopter to a country hotel for afternoon tea.

‘He loved his life. And he seemed to be living the dream flying with his girlfriend. Which is why their sudden passing in this tragedy is so terribly, terribly sad.

‘In recent years they have been in high demand from private clients in particular and have been flying private jets and helicopters as a duo enabling them to travel to some amazing locations such as Greece, Thailand and Vienna.

‘Recently, I was pleased to see from his Facebook posts that he had put down roots and bought a beautiful home with Izabela in Camberley. They were often having dinner parties with their many friends.’

Speaking to Stephen Nolan on BBC Radio 5 Live, Ms Morris-Marr described their romance as an ‘aviation love story’, adding: ‘Not many people get to work and travel with their soulmate, travelling the world going to glamorous places.’ 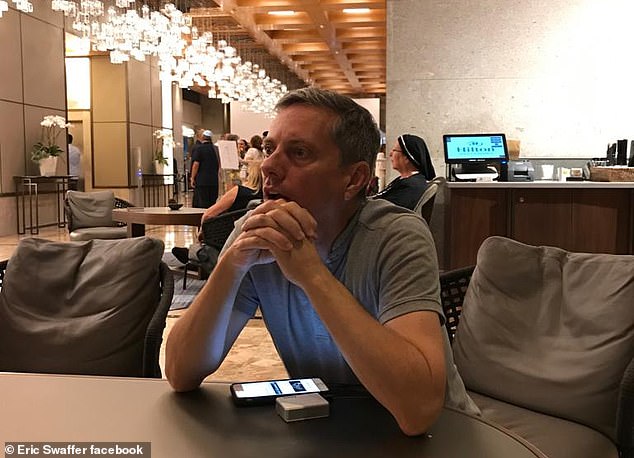 Eric Swaffer was with Uri Geller in Israel just weeks before he died. The illusionist paid tribute to his ‘best friend’ 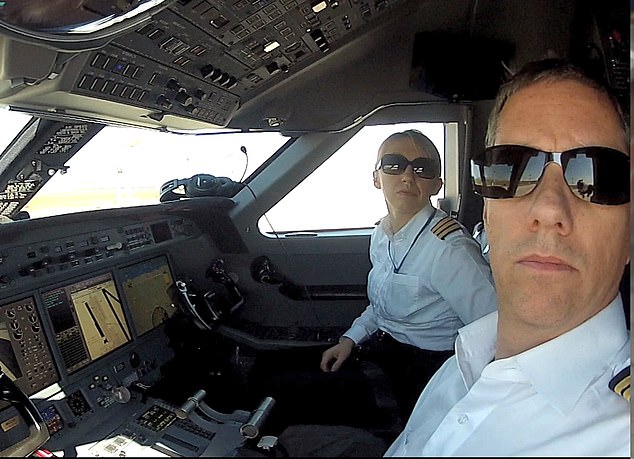 Izabela Lechowicz and boyfriend Eric Swaffer pictured in the cockpit. The pair died as they guided the helicopter away from the crowded football stadium

Ms Morris-Marr added: ‘Having been lucky to have known him as a friend and flown with him a few times as a passenger, it doesn’t surprise me that he would have done all he could to save lives and do everything in his power to avoid a worse outcome in those final moments. He was an incredible person and very focused when flying.’

The 43-year-old said Mr Swaffer was experienced at flying several types of aircraft, but had a ‘passion’ for helicopters. 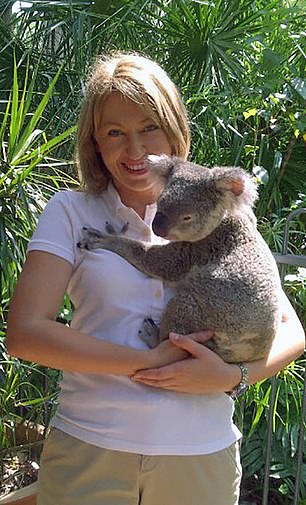 Izabela Roza Lechowicz had enjoyed travelling around the world

Uri Geller, 71, paid tribute to the pilot who he counted among his best friends, as well as Izabela who Mr Swaffer had dated since 1997.

The pair had spent time together just weeks ago in Israel.

Mr Geller told MailOnline: ‘He was an amazing person, as well as being a great pilot.

‘He flew me many times in many different helicopters.

‘As soon as I saw the news I sent him a message and I wanted to see the ticks to say he had read it and that did not happen. I called him immediately after I heard and there was no answer.

‘The last time he checked his phone was a few moments before the crash. That led me to believe he had died.

According to friends, Mr Swaffer had a great relationship with the Leicester chairman. 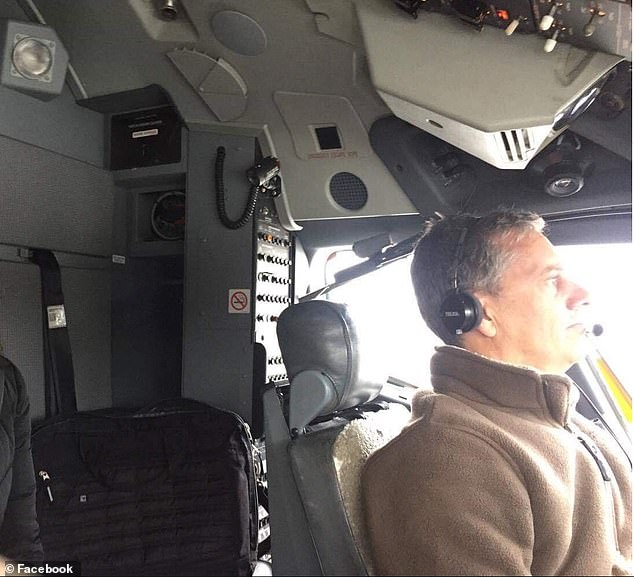 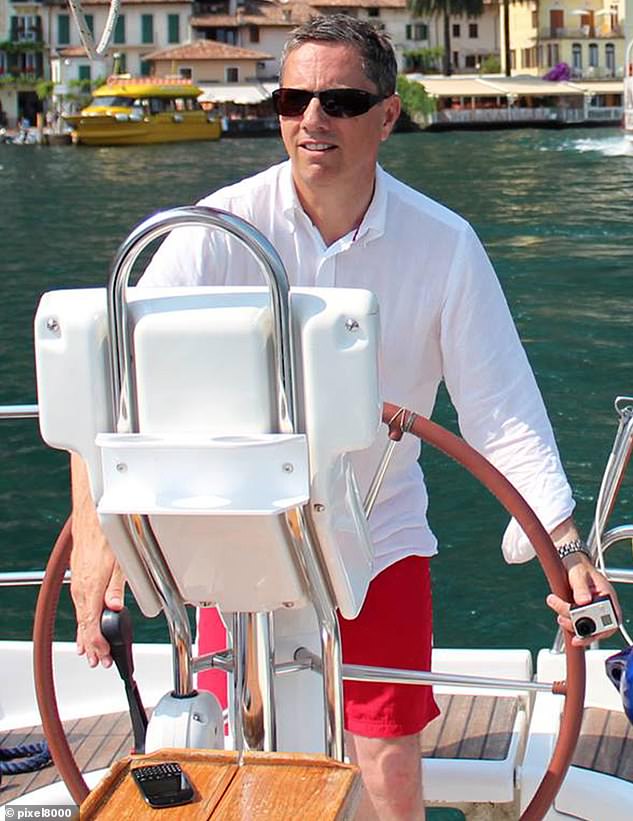 Mr Geller said: ‘He looked at Izabela as his wife they had a beautiful home, which he loved.

‘And he loved his boss. He was definitely his personal pilot, for about the last two years I think. But he also flew other dignitaries around the world.

‘They had a beautiful relationship – he didn’t distance himself from his pilot as other people do. He was warm and friendly. He was so nice to Eric.’

Mr Geller believes a mechanical fault must have brought down the flight because Mr Swaffer was extremely skilled.

He said: ‘He flew me into my home in England where I had a helipad – and all over the world

‘He flew me into confined areas, in places I would never believe you could land. But he didn’t take chances, he was very serious.

‘He was so careful. Maybe in his last moments of frantically trying to live he pushed the stick to make sure he didn’t land on houses

‘It is strange I was telling him he should give up helicopters and stick to jets, I don’t know why I just had a felling – call it intuition.’ 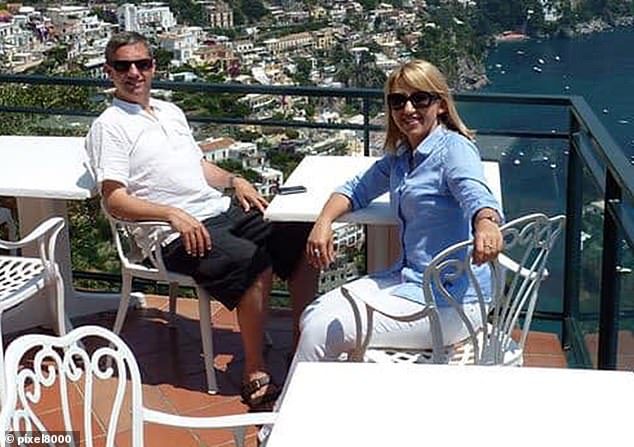 Writing earlier this year about becoming a pilot as part of the project to celebrate women getting the vote in Poland in 1918, Izabella said she was inspired by her partner

Ms Lechowicz, who moved to the UK from Poland in 1997, was selected by her country’s London embassy as one of 18 exceptional Polish women who inspired the community in the UK for being a pilot.

Writing earlier this year about becoming a pilot as part of the project to celebrate women getting the vote in Poland in 1918, she said she was inspired by her partner.

She added: ‘Shortly after (coming to the UK) I also met my partner, who back then worked as an airline and helicopter pilot. 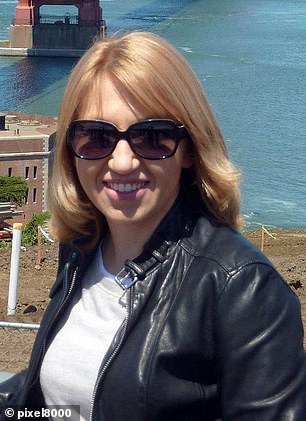 ‘He took me out for a few flights, and that is how it all started. I knew this is something I want to do from the moment I touched the controls for the first time.’

The Polish embassy described Ms Lechowicz as ‘a wonderful pilot’ who ‘created a positive image of Poland in the UK’.

Ms Lechowicz’s former boss also paid tribute, calling her ‘so talented that exceptional became the norm with her.’

‘The amazing thing about her is that after only two years, she got an A in her Cambridge Proficiency exam, meaning she was almost fluent.

‘It takes most people at least five or 10 years to get a result like that, but she achieved it in just two years. She’s the only person I can think of who managed it.

‘It just shows what a disciplined mind she had. But at the same time she was very modest. She didn’t flaunt what a talent she had at all.

‘She was always one of those people who did the job without any fuss and did it very well. She was very reliable. The exception became the norm with her. She will be remembered.’ 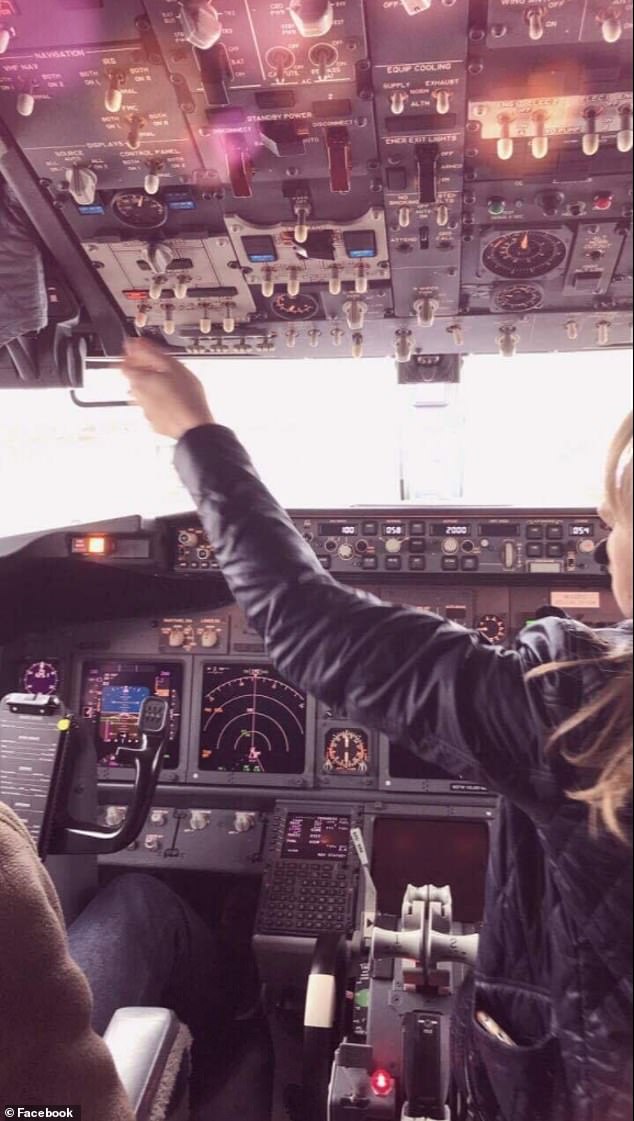 ‘In 2002 she left us,’ Mr Simons added. ‘She had developed a relationship with Eric, her pilot boyfriend, and gradually over the months she got interested in what he was doing.

‘She was drawn to flying herself. When he went into flying executive jets and helicopters, she decided to train herself.

‘I was amazed and surprised at the time. I wasn’t amazed that she made such a success of it, because she could achieve anything she set her mind to.’

Golders Green College plans to put up a permanent memorial to Ms Lechowicz, he added. ‘She was a truly exceptional person and it’s a tragedy she was taken so soon,’ he said.

Mr Swaffer told Private Fly his favourite airport approach and helicopter landing sites included Male in the Maldives and Samedan near St Moritz because it ‘has wonderful views of the Alps.’ 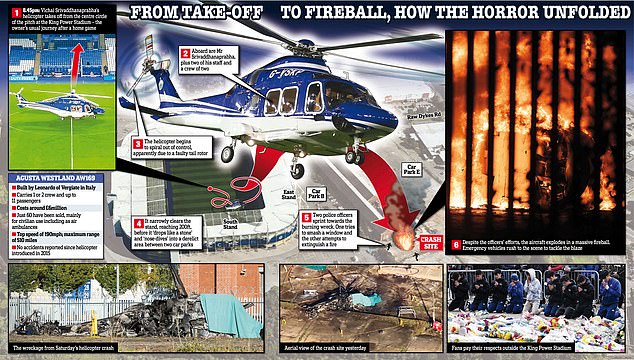 The doomed Leicester City helicopter pilot may have been become stuck in a ‘dead man’s curve’ after the aircraft’s tail rotor failed, experts suggested last night

He said his most memorable flight was ‘winching an injured person on board a helicopter from a ship 100 miles north of the Shetland Islands, in 70 mph winds and deep swell.’

When asked what he loved about his job, he said: ‘The travel is incredible, as well as the fantastic people you meet along the way.’

Head master Richard Cairns said: ‘It is with great sadness that the school learnt today that one of our former pupils, Eric Swaffer, died at the weekend.

‘Eric was at Brighton College from 1979 to 1983 and fell in love with flying when, as a schoolboy cadet, he visited a Royal Navy ship flight deck.

‘His contemporaries and teachers remember him as a kind and popular boy. We send our deepest condolences to his family.’