Lewis Hamilton is King of the Track for a record-equalling seventh time. Victory on the day, victory over the season, victory for the ages.

The British driver sealed the world championship by winning the Turkish Grand Prix – holding his nerve, nursing his tyres for 50 laps, on the slippery track at Istanbul Park to write a celebrated concluding chapter to the annexation of his sport in 2020.

The win by a monster 31 seconds, the 94th of his career, put him level with Michael Schumacher, who lies stricken at home after his terrible skiing accident seven years ago. When the great German took his own title No 7 in Belgium 16 years ago, in a race he finished second, it seemed probable the record would stand for an eternity. 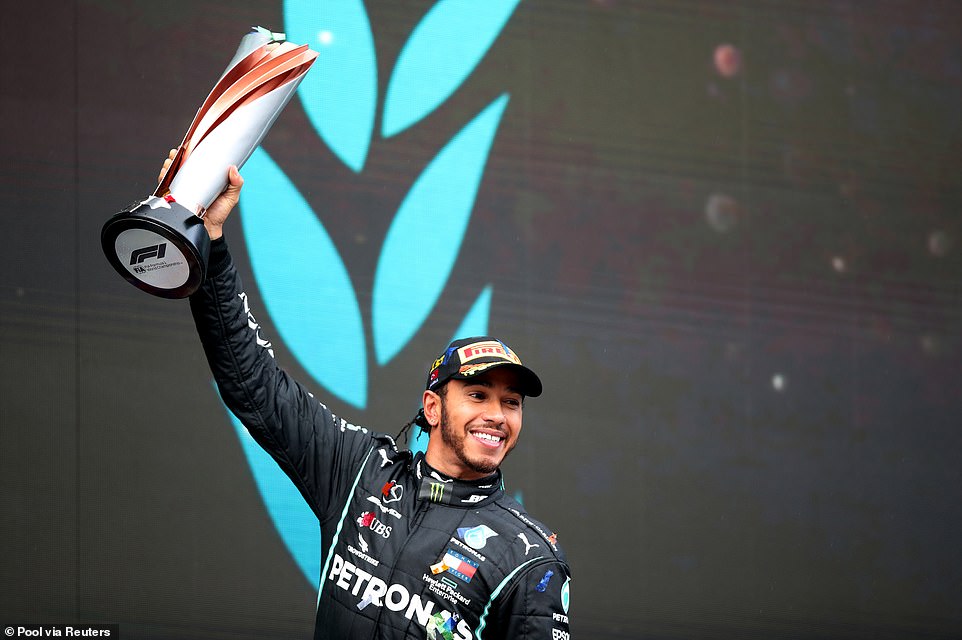 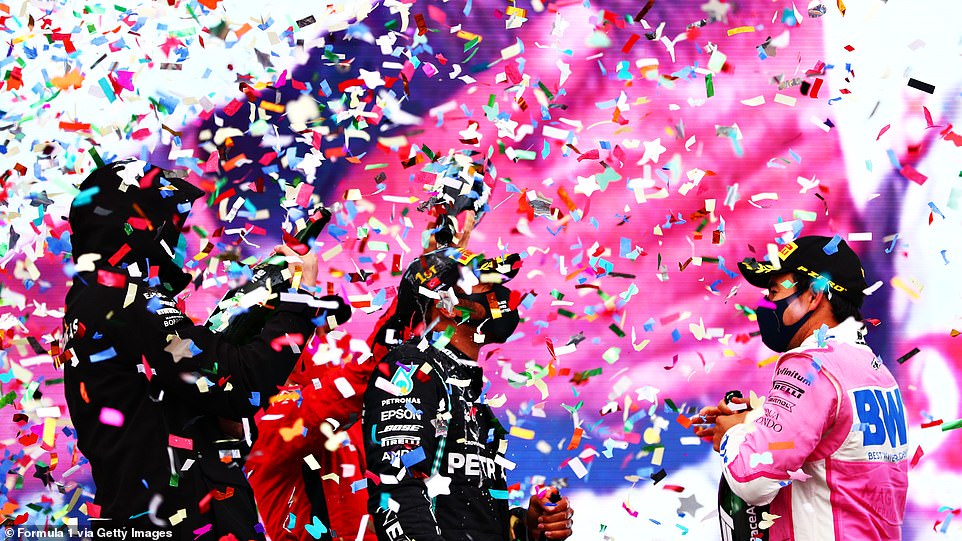 The confetti falls on Sergio Perez (right), Hamilton (centre) and Vettel (back, in red) to celebrate Hamilton’s win in Turkey 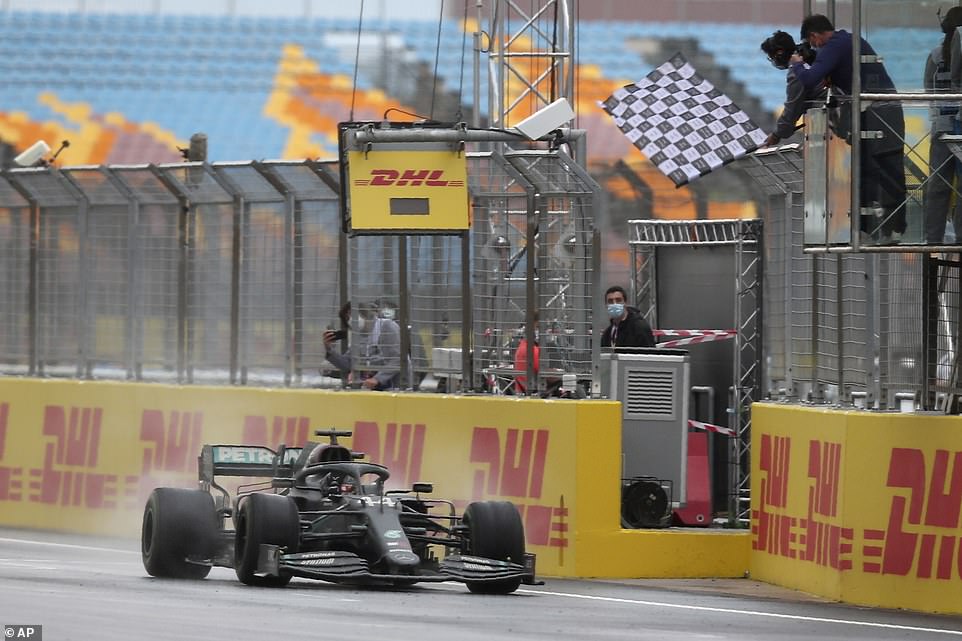 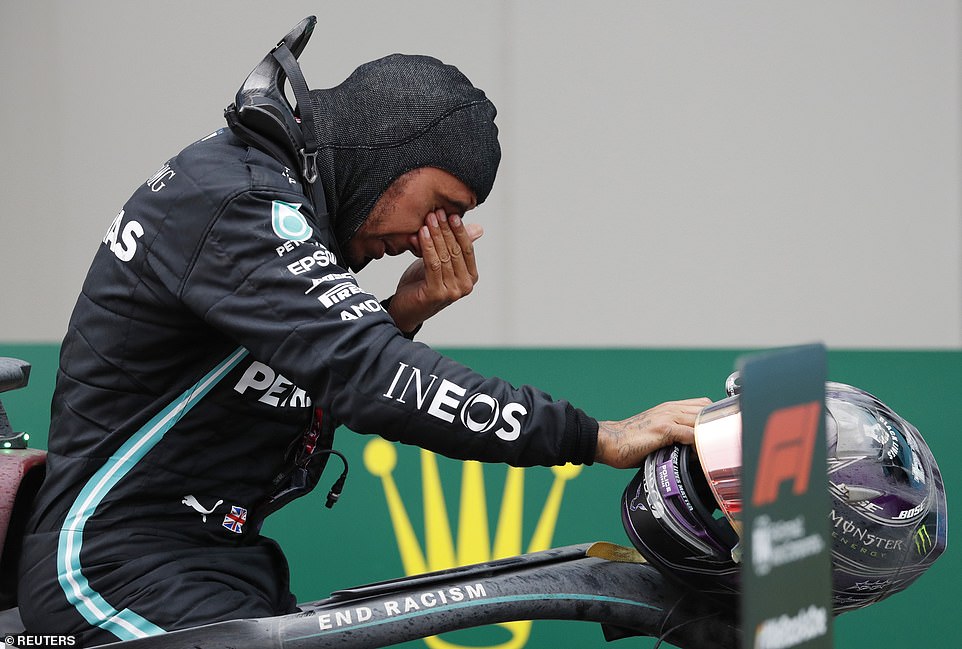 But over the course of the intervening season, Hamilton, by dint of his own skill and unrelenting focus, has turned the impossible target into a staging post. On next to his eighth wonder of the world.

He started the race only sixth on the grid but gradually gnawed his way into the frame as the afternoon wore on.

Hamilton took the lead with patience, sure-footedness and style on lap 37, planting his black car on the rear of Sergio Perez’s Racing Point. The champion steered right and, withstanding the rivulet of water he now occupied, zipped past the pink machine for the lead between Turns 11 and 12, and an imperishable moment in the storied history of British sport.

As so often, the best drivers prove themselves in the wet, and this was a case in point. Time and again, stretching back to the first exhibition of his amphibious qualities in the foothills of Mount Fuji 13 years ago, Hamilton has proved his specialness in the toughest of conditions. 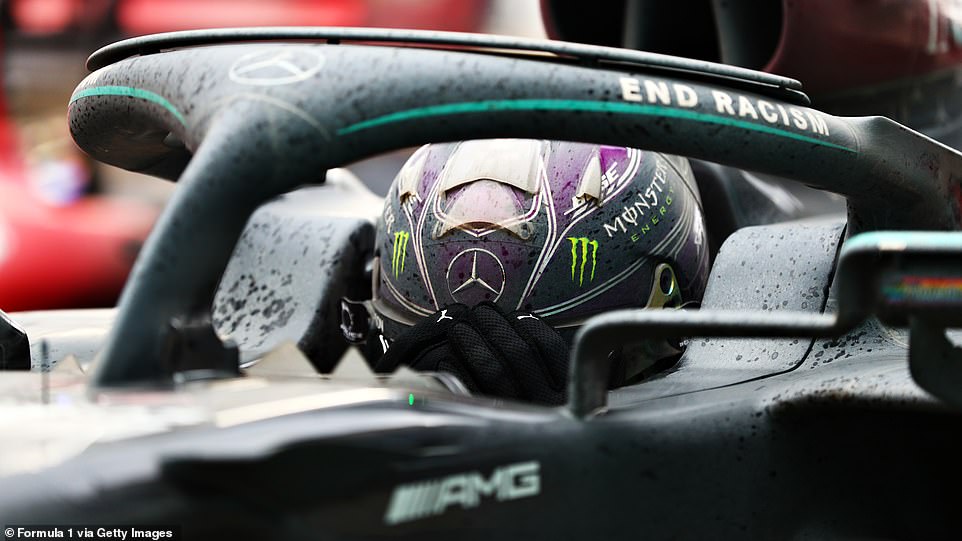 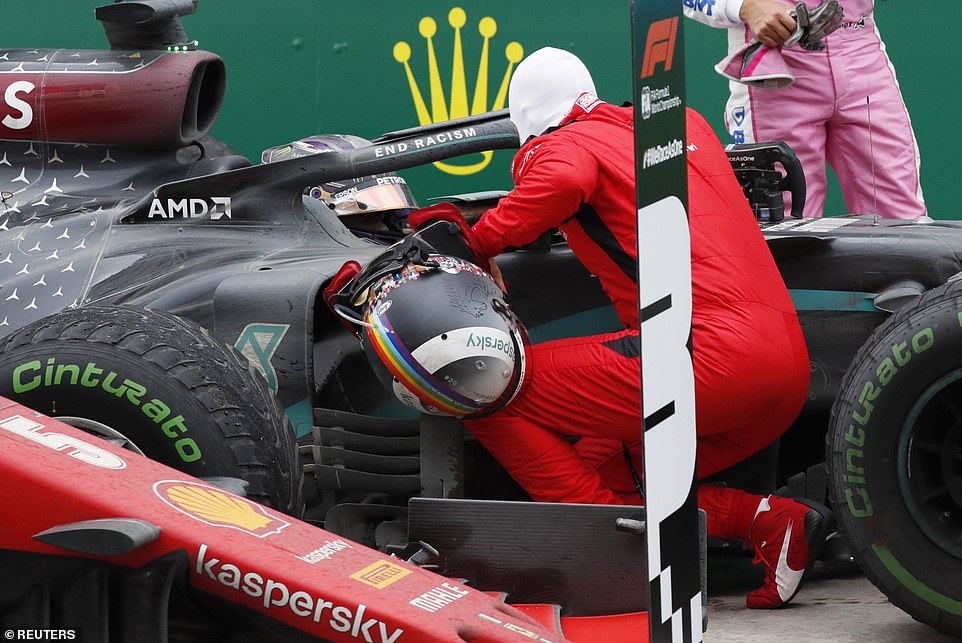 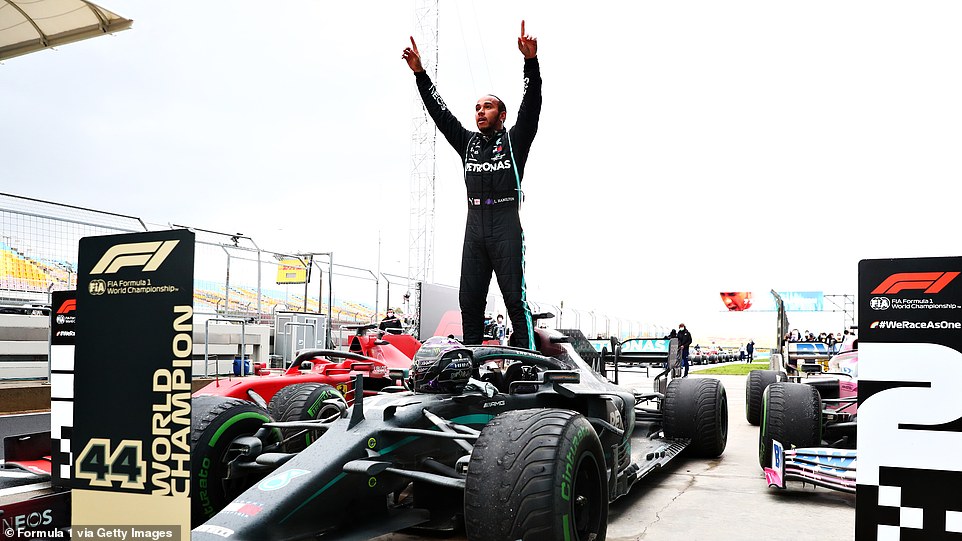 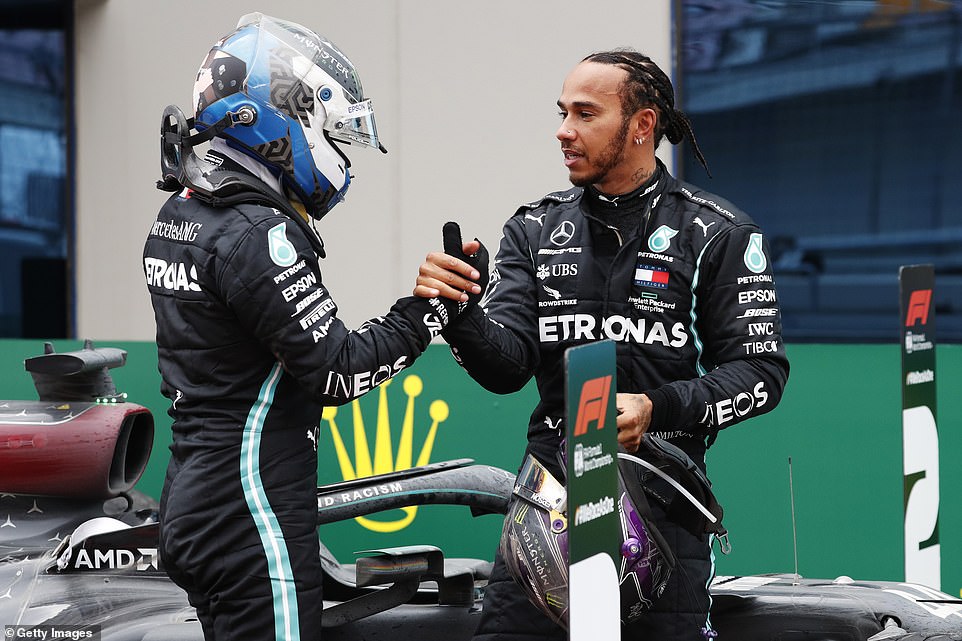 Here Hamilton and Mercedes kept their heads while all about them lost theirs. The Racing Points, for long and so fabulously in the lead, audibly fretted over the radio, such was their unfamiliarity with the rarefied air of race leadership. They ran out of steam and of options, and Hamilton was gunning for them, and as we have said, past one of them.

Now for the man who goes under the misnomer of Hamilton’s team-mate, Valtteri Bottas. He should be renamed his victim.

The Finn simply cannot live with the Stevenage-born peddler at close to the zenith of his capabilities.

The chasm in class was exhibited time and again here. If Bottas can count himself unlucky to have spun on the opening lap trying to avoid the two Renaults, he cannot excuse the many slips that followed. He finished 14th.

And to think he started the day as the only contender who could possibly – that is to say mathematically – prevent Hamilton winning the title with three races to spare. But, hey, he ended up lapped by the prey that twice drove out of his sight. 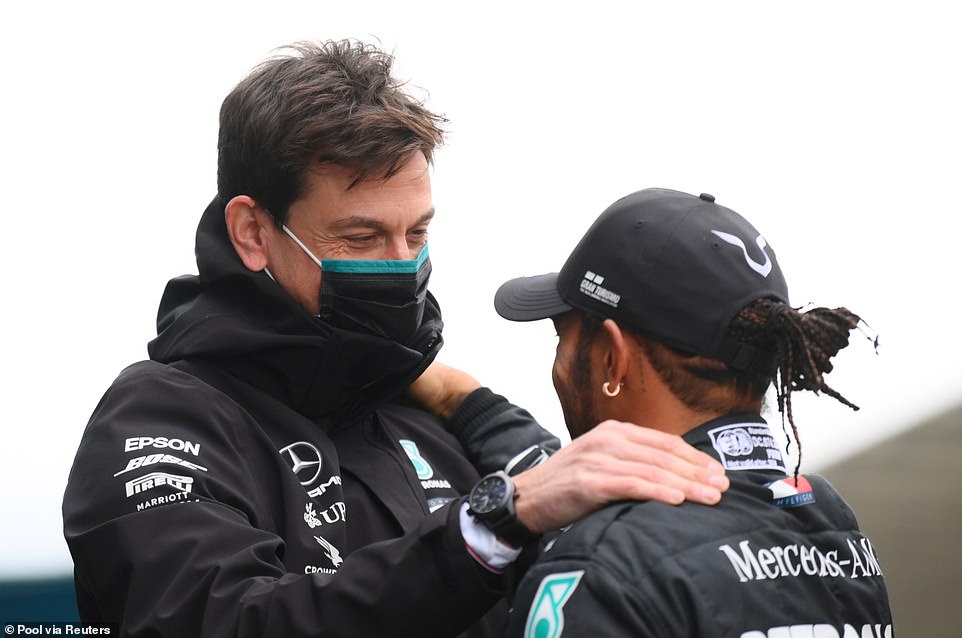 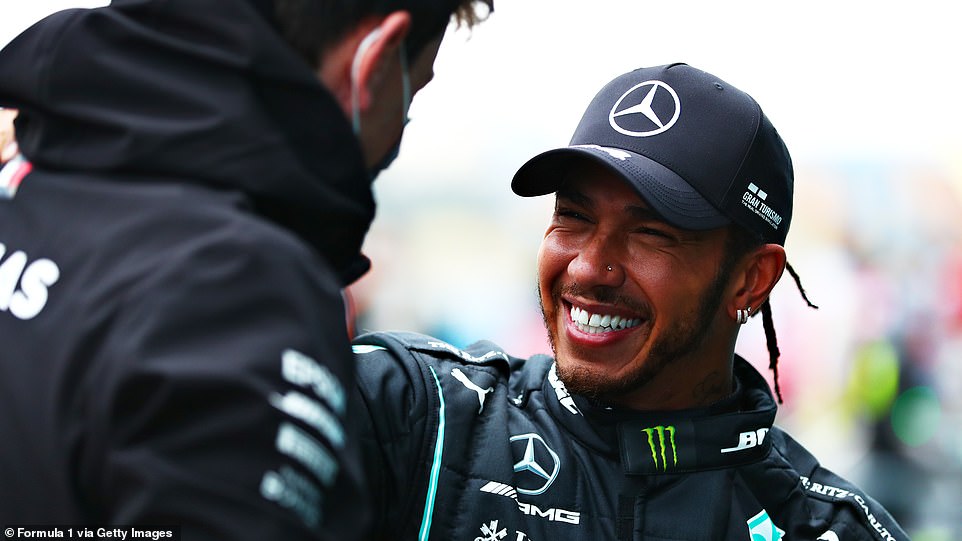 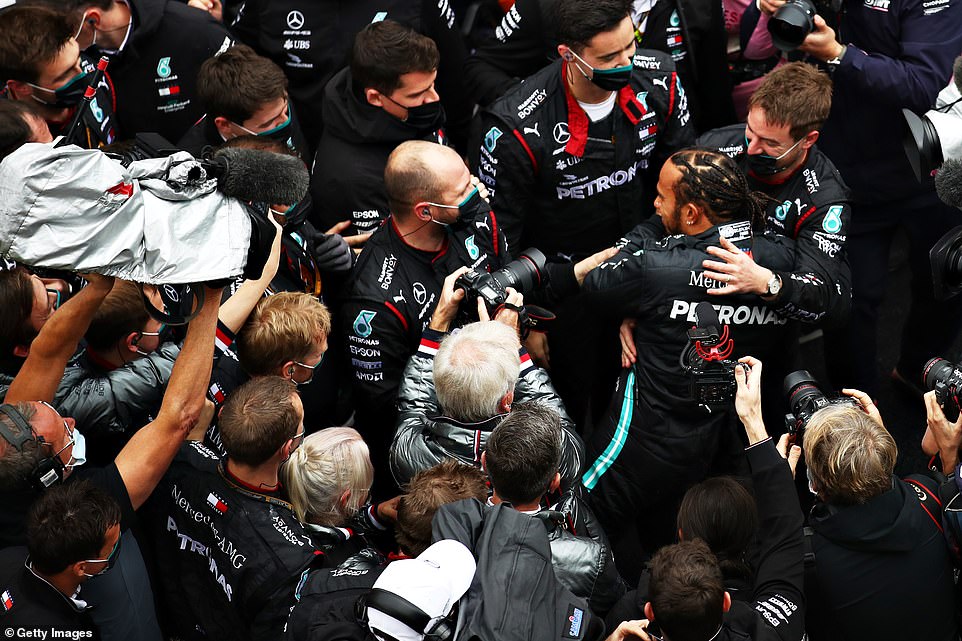 And all this against the backdrop of a dismal two previous days. Hamilton had moaned like mad about the track – how slippery it was in the wet or dry having only been resuraced in the last fortnight.

On Friday, he called it terrifying. What was he talking about? Of course, it was perilous, full of perdition at every turn, but suddenly putty in his gloved hands.

My mind turned back to the first of his great glories on that rain-splattered afternoon in Sao Paulo when rain fell and he passed Timo Glock for the first of his world titles. He was then but a boy, a 23-year-old with the world at his right foot.

There was an element of luck that time. Yesterday, there was no fortune. Nor complication of machinery – ask Bottas to verify that!

Hamilton somehow – and this is beyond explanation of the greatest boffin who ever studied physics, engineering or cosmology – rationed his intermediare tyres better than the rest, beyond compare. Perez finished second, with Ferrari’s Sebastian Vettel third. 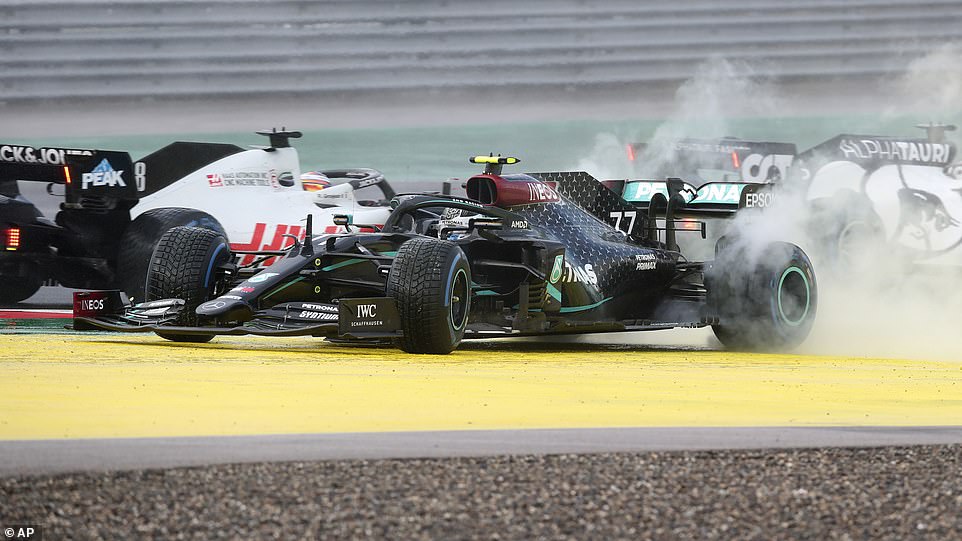 Bottas spun on the first corner to hand Hamilton the advantage to run away with the race, before he was lapped later on

IN NUMBERS: HOW LEWIS HAMILTON COMPARES TO MICHAEL SCHUMACHER

Here is how two of the sport’s most successful drivers compare to one another.

Schumacher won seven championships, two with Benetton in 1994 and 1995 and then an unprecedented five on the spin for Ferrari at the turn of the century.

A controversial driver, he collided with Damon Hill and Jacques Villeneuve at the 1994 and 1997 championship deciders, before he was adjudged to have deliberately parked his Ferrari at Monaco in 2006 to prevent Fernando Alonso from setting a lap in qualifying.

Little is known of Schumacher’s current medical health following a skiing crash on holiday with his family in the French Alps in 2013.

Hamilton was the youngest world champion when he won his first title in 2008 – a record since broken by Sebastian Vettel – and 12 years later he is firmly among the elite.

His tally of victories, pole positions and podiums is the most ever and he is set to gun for a record-breaking eighth championship next season.

Someone in the press box asked me what lap Racing Point’s Lance Stroll pitted. It reminded me of the old story of the young journalist in the Old Trafford press box who, when George Best despatched a scorcher, asked a colleague what minute he had scored. The older hand told him: ‘Don’t worry about the minute, remember the date.’

The race had started, albeit no longer raining, on a track that in the shy sun gleamed like a silver operating table.

But the surgical precision was the sole preserve of Lewis Carl Davidson Hamilton, who outshone the young pretender Max Verstappen of Red Bull, who was impetuous and brilliant in turns. Hamilton was just brilliant – well, as well as prudent.

And it ended here with tears on the radio, an exclamation that told of a lifetime’s endeavour.

We have worn out the superlatives this season until the thesaurus conceded defeat. All hail Hamilton, god of the grid.

Lewis Hamilton has it all to do if he is win an record-equalling seventh world title in Istanbul after the Brit endured a torrid time during qualifying on Saturday.

Hamilton only needs to finish in front of Mercedes team-mate Valtteri Bottas to land the championship with three races left but is prepared for a very tough race after he  struggled on the wet and newly resurfaced circuit over the weekend.

The chaotic qualifying session did throw up a career’s-first pole position for Racing Point’s Lance Stroll, who got to grips with the treacherous conditions to go fastest on Saturday.

Max Verstappen starts alongside the Canadian for the race while Stroll’s team-mate Sergio Perez also enjoyed a quick qualifying session and starts third on the grid.

Sportsmail’s Sam McEvoy will provide all the live coverage from Istanbul Park.