Line of Duty actor Tommy Jessop, who has Down’s syndrome, backs Bill to help others

Jessop made his TV debut in Holby City and became the first actor with Down’s syndrome to play a leading role in a primetime TV drama when he was cast in the BAFTA-nominated Coming Down The Mountain opposite Nicholas Hoult.

He has also appeared in Casualty and Doctors, landed roles in critically-acclaimed short films, and is the first professional actor with Down’s syndrome to play Hamlet, in a performance that Sir Mark Rylance hailed as ‘phenomenal’.

Tommy’s acting career has been supported by parents Jane and Edmund and his brother William, a documentary filmmaker who once said: ‘Tommy can’t really tie his own shoelaces, but he can stand on stage and break your heart.’

Line Of Duty marked the return of character Terry Boyle, a man with Down’s syndrome who is ruthlessly exploited by an organised crime group. But it is the actor who plays Boyle who has everyone talking, with Twitter users praising the performance by Tommy Jessop (pictured)

Jane, a former marketing executive, discovered their youngest son had Down’s syndrome on the day he was born.

‘My first reaction to finding out Tommy had Down’s syndrome, which was on the very first day, was “why has God sent him to us?”,’ Jane recalled in William’s 2013 short film about his brother, Tommy’s Story.

‘But I was also very worried for his older brother, that this would affect his life. I always thought people would look at me differently as well. But of course, none of these things turned out to be true.’

William, who has made two films about his brother and produced sperm donor documentary 25 Siblings And Me, explained how growing up they were ‘just like any other brothers’. 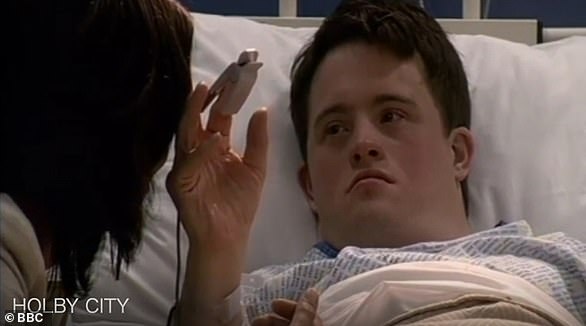 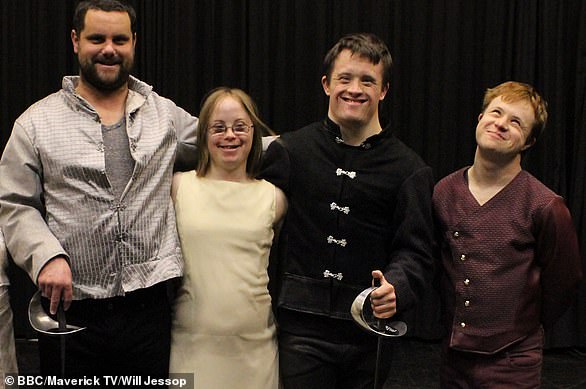 In 2012, Blue Apple Theatre’s production of Hamlet toured 12 theatres and garnered celebrity attention. Sir Mark Rylance praised Tommy’s ‘to be’ speech as ‘phenomenal’. Pictured, Tommy, second from right, with the cast including his then girlfriend Katy

‘We played football together, or on the climbing frame, or cricket,’ he recalled in a 2014 interview.

‘I know my Mum was worried at first about how having someone like Tommy for a brother would affect me, but actually I don’t remember it ever being an issue.

‘I now realise that Tommy is an incredibly strong, bonding force in our family. We’re all still very close, and I love spending time at home.’

Tommy’s flair for acting was evident from a young age.

‘Tommy wanted to perform from when he was very little,’ Jane told the Daily Express. 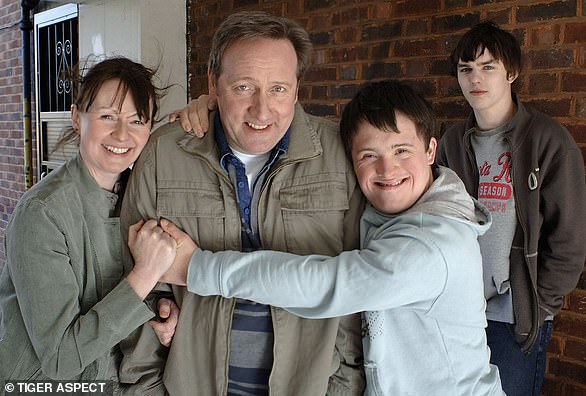 Tommy’s big break came in 2007 when he was cast in the BBC1 TV adaptation of Coming Down The Mountain, a radio play by Mark Haddon which focuses on the relationship between a boy with Down’s syndrome and his resentful brother. Pictured, Tommy with the cast 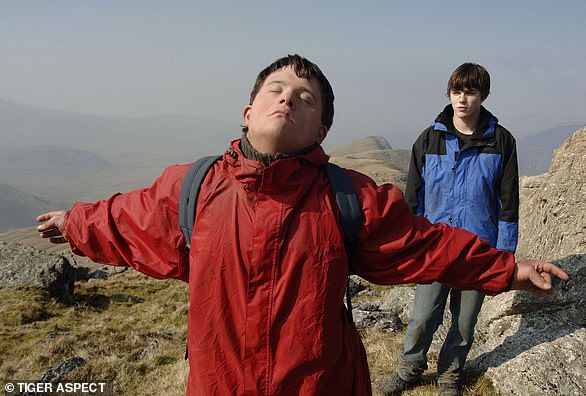 The feature-length film, co-starring Skins and X-Men star Hoult as Tommy’s brother, was nominated for a BAFTA and an Emmy award. Pictured, Jessop and Hoult in the film

‘He loved making people smile and laughed a lot himself. His junior school did wonderful plays and Tommy always had a role. Then as a young teenager he took part in a mixed-ability drama group.’

Once he aged out of youth theatre, Jane, who is chairman of her local branch of learning disability charity Mencap, found there was nothing suitable for her son locally and decided to start her own theatre group in 2005.

Blue Apple Theatre, based in Winchester, Hampshire, casts adults in their 20s and 30s with learning disabilities in shows, giving them acting opportunities they wouldn’t have elsewhere.

Tommy’s big break came in 2007 when he was cast in the BBC1 TV adaptation of Coming Down The Mountain, a radio play by Mark Haddon which focuses on the relationship between a boy with Down’s syndrome and his resentful brother. 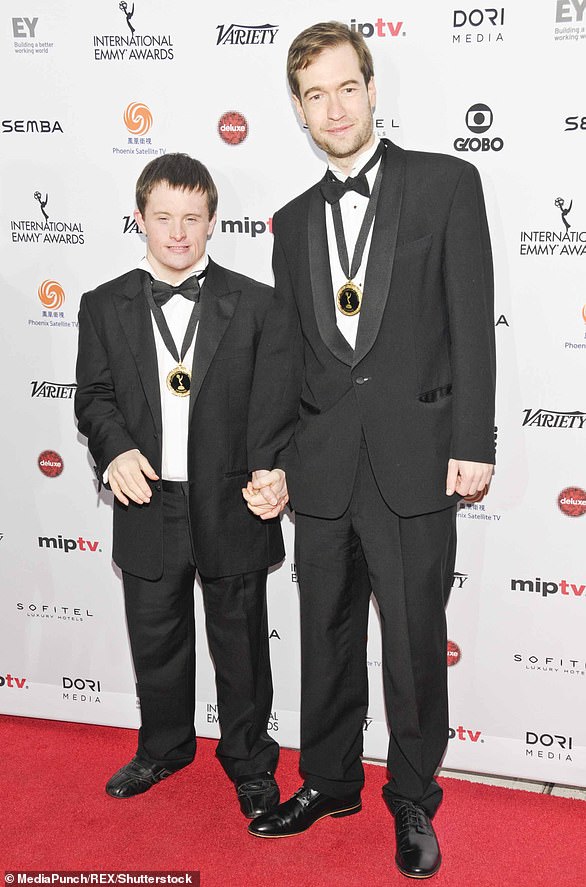 The feature-length film, co-starring Skins and X-Men star Hoult as Tommy’s brother, was nominated for a BAFTA and an Emmy award.

‘Tommy took me to the Baftas,’ Jane said. ‘Seeing Tommy relaxed, smiling and professional on the red carpet in front of the flashing cameras, was amazing. I had no idea from his early days what a great life he would have.

‘Tommy used to be pretty shy but now he is far less so and has a good circle of friends. I wanted him to have a chance on stage and now he is a very powerful performer.’

The film served as a launchpad for Tommy, who has since appeared in short films Fighter, Innocence and Little S**t. He has also landed guest lead roles in BBC Radio 4’s Afternoon Plays including an episode of Stone with Hugo Speer.

He played the lead in The Climb opposite Warwick Davies, and had a cameo role in The Archers.

William made a documentary, Growing Up Down’s, about the rehearsals for the play, while also capturing Tommy and his co-stars reflecting on love and life with Down’s syndrome. 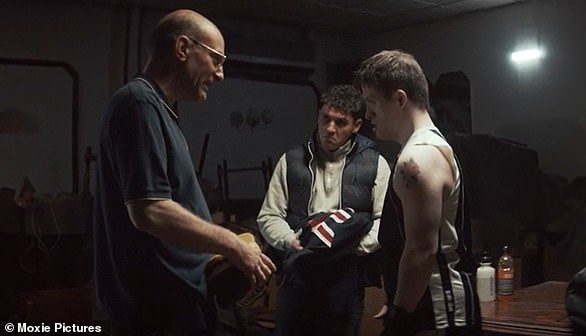 He starred in the production alongside his then girlfriend Katy, although the pair split up during filming.

‘Tommy and Katy started going out during the filming and Katy was his first-ever girlfriend,’ William said in an interview about the film.

‘The scene in the documentary where they are breaking up is so powerful. Because I know Tommy so well, I don’t see him as someone with Down’s. I just see him as Tommy, but it was moving for me to see how mature he was.’

Line Of Duty is undoubtedly Tommy’s most high profile gig to date.

He first appeared as Terry Boyle in one episode of series 5, but was a much bigger presence on screen in the most recent series. The character first appeared in the first series, in 2012, but was played by a different actor, Elliott Rosen.