Liverpool star Roberto Firmino: ‘This is my best year as a footballer’

‘This is my best year as a professional footballer’: Liverpool striker Roberto Firmino confident as he looks to continue Champions League scoring streak in final against Real Madrid

Roberto Firmino says he is having his best ever season as a professional footballer – but is still annoyed that he isn’t playing even better.

The Brazilian striker is preparing for the Champions League final with Liverpool against Real Madrid, having scored 10 goals in the competition this season.

Firmino holds himself to high standards and says he is not satisfied with his goal return this campaign, but feels he can find another strike in the final game.

In an interview with the UEFA website, Firmino said: ‘We got good results against Manchester City and Roma. I thought we played great and I hope we can keep that up.

‘Am I happy with having scored 10 goals since the start of the group stage? Very, very. Although I am a little bit annoyed, because I always want more and I am never satisfied. However, you cannot beat yourself up about these things all the time and you must always keep moving forward.

‘It is my first season in the Champions League and I am one of the leading scorers, alongside Cristiano Ronaldo and Mohamed Salah. This is my best year as a professional footballer.’

Firmino is preparing for his first ever meeting with Real, who are going for an unprecedented third successive Champions League title.

He admits it will be tough to beat such an experienced European side, but says his team mates will look to channel the great title wining sides of Liverpool’s past. 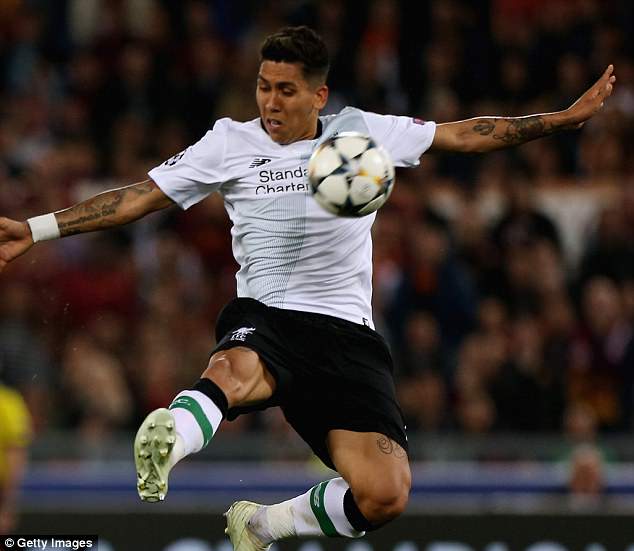 Firmino said: ‘We know about Real Madrid. They are always winning titles in the Champions League and in the Spanish league too. I’ve never played against them, but I’ve watched their games and they’re very competitive.

‘However, this is a final; a one-off game, a one-off moment. They’ll also be up against Liverpool – a team and a club with a great pedigree. We are going to fight until the end.’

He also spoke about his childhood playing football in Brazil, and revealed who his sporting hero was growing up.

Firmino said: ‘I used to finish school and go and play football. I always modeled myself on Ronaldinho. He was one of my favourites who I followed a lot – his magic, made us want to imitate him and his football. Is my goal celebration a tribute to him? Yes, of course. I like him a lot.’