A mini-heatwave is being blamed for commuters staying home to enjoy 82F temperatures today as many stayed away from London’s rail and Tube network.

Passengers and Transport for London (TfL) staff have claimed that there were significantly fewer travellers this morning compared to Monday.

TfL has insisted that during peak hours this week it ran more than 75 per cent of Tube services on average across the whole network.

However, images taken during rush hour suggests that the number of commuters using Underground services is low or declining.

Roads are also less busy this morning as traffic levels across the country have fallen by an average four per cent compared to last Wednesday.

It comes as Sadiq Khan demanded that shops and supermarket stock more face masks in anticipation of rush hour today.

The Mayor of London has vowed to restore TfL underground services to 75 per cent of pre-lockdown levels from Monday all this week.

His intervention comes as Londoners have complained that fellow commuters are not wearing reusable non-medical face masks. 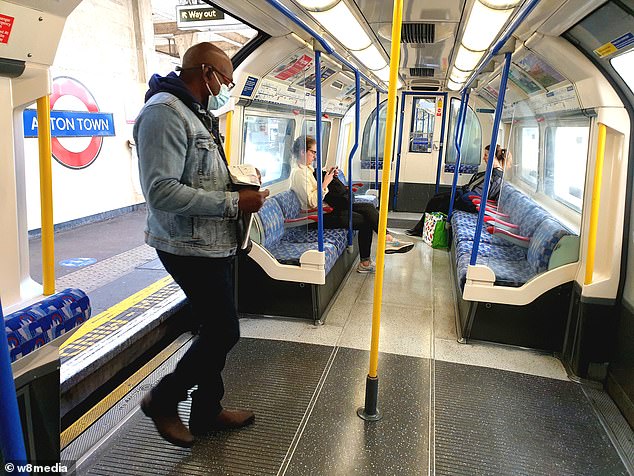 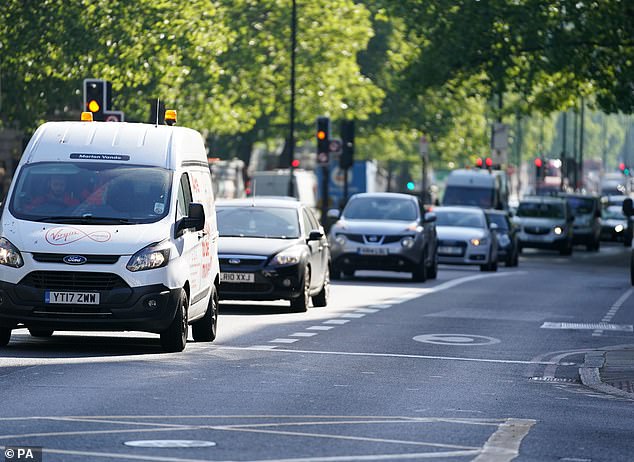 As the government tries to restart the UK economy, traffic data from the rush hour today shows that roads in and around big cities is down on last Wednesday.

Live tracking by TomTom indicates that congestion is around three per cent lower across the country today at 8am compared to the same time last week.

Traffic in Southampton, Manchester and Birmingham was four per cent lower than at 8am last week, and two per cent lower in Liverpool for the same period.

Apple mobility data from Monday (the latest available data) indicates there was a rise in the number of requests to drive or walk to work compared to May 13.

Requests to drive, use public transport and walk increased by five per cent, four per cent and six per cent on Monday compared to last Wednesday.

A spokesman for the AA told MailOnline: ‘Traffic levels are still lower than pre-lockdown levels, but more vehicles are heading out.

‘However, vehicle traffic in the heart of major cities remains low and will probably remain so until shops, restaurants and offices can open up again.

‘When the relaxation of movement is introduced we could see towns and cities become a little busier, but just how busy remains to be seen.’

Traffic in London at 8am was down three per cent from last Wednesday, TomTom data shows

Traffic in Brighton at 8am was down five per cent from last Wednesday, TomTom data shows

Traffic in Bournemouth at 8am was down six per cent from last Wednesday, data shows

Traffic in Southampton at 8am was down four per cent from last Wednesday, data shows

Traffic in Manchester at 8am was down four per cent from last Wednesday, data shows

Traffic in Liverpool at 8am was down two per cent from last Wednesday, TomTom data shows 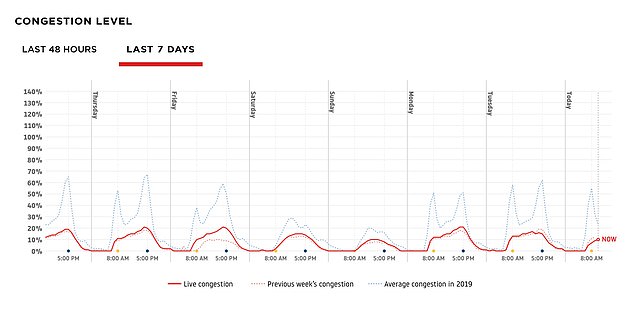 Traffic in Birmingham at 8am was down four per cent from last Wednesday, data shows 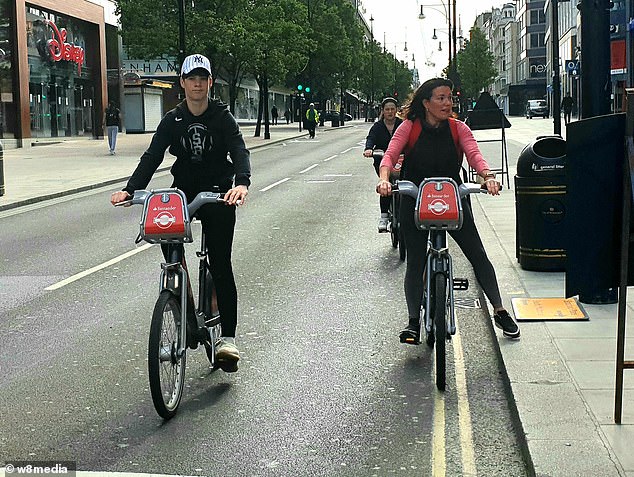 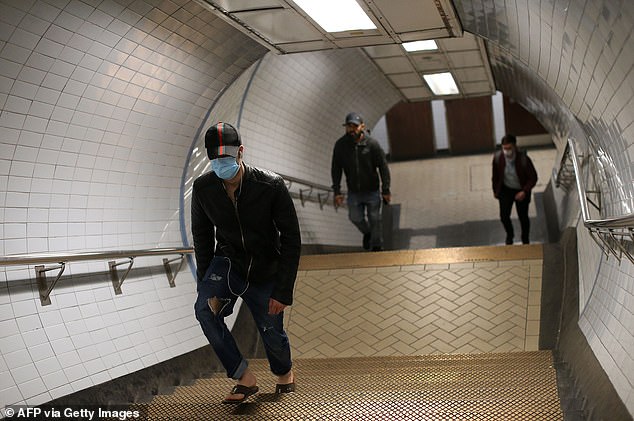 Electrician Vic Perhar, who had arrived at Paddington station said: ‘My train was virtually empty and a lot quieter than it has been over the past few days.

‘I think people are just making the most of the good weather and who can blame them because we could all do with a bit of cheering up.

‘People are allowed to go out more and the next few days will be ideal for just sitting in your garden or going somewhere to have a picnic.

‘Who the hell wants to go to work when it’s so warm?’

Janet Riley, from Reading said: ‘I’ve been getting the train to Paddington since returning to work on Monday and today is the quietest it’s been. There was hardly anybody on my carriage and I’m sure it’s down to the warm weather.’

‘I bet a lot of people have decided to work from home or even ring in sick. I was tempted myself, but I run my own business and am my own boss’.

A Paddington station worker standing by a ticket machine said: ‘To be honest, it’s been quiet all week. I know parts of the network have been very busy, but our station has been really quiet. It’s very noticeable that there are even fewer passengers today but that’s actually quite normal when the weather is really nice. 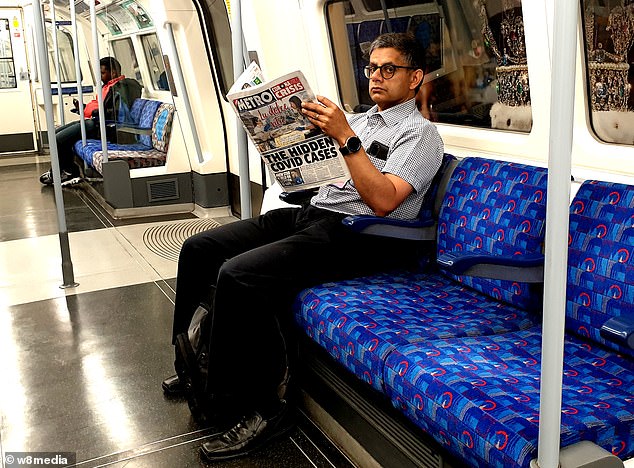 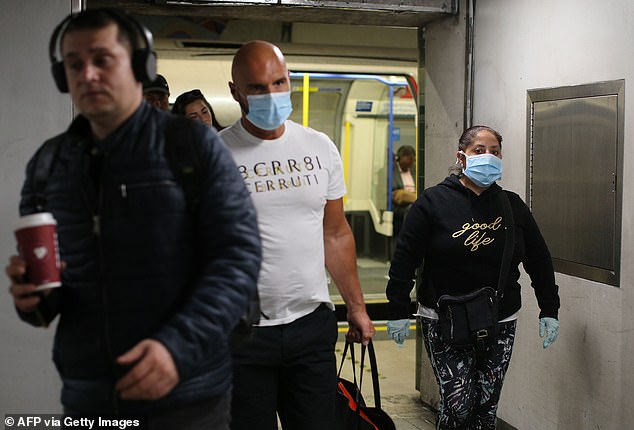 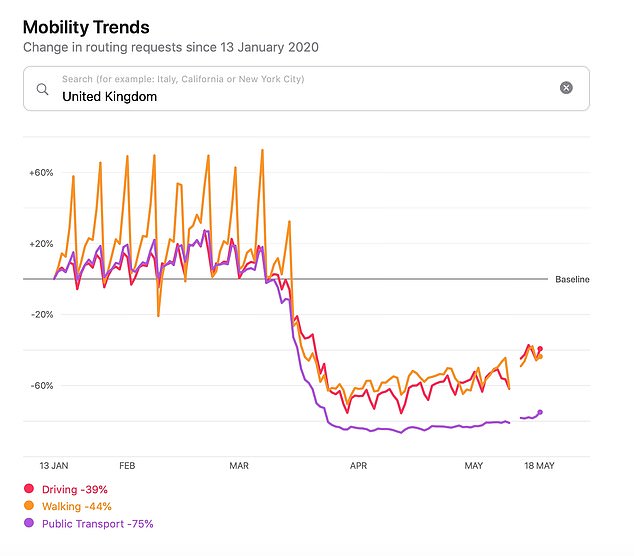 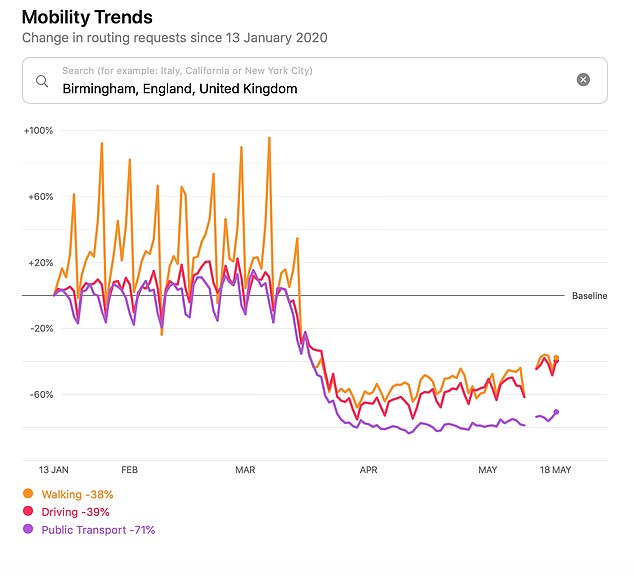 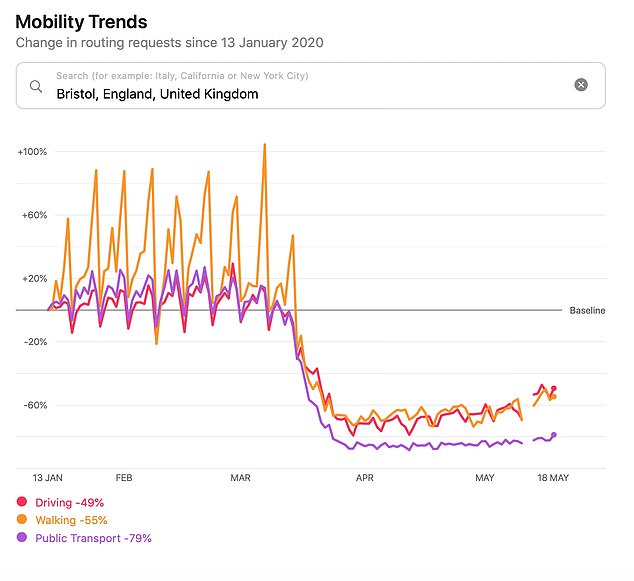 Bristol data from Apple shows an increase on Monday, though data for today is unavailable 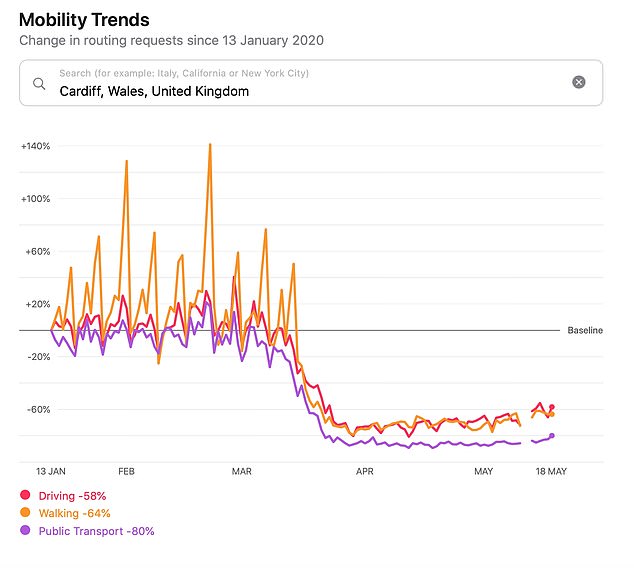 Cardiff data from Apple shows an increase on Monday, though data for today is unavailable 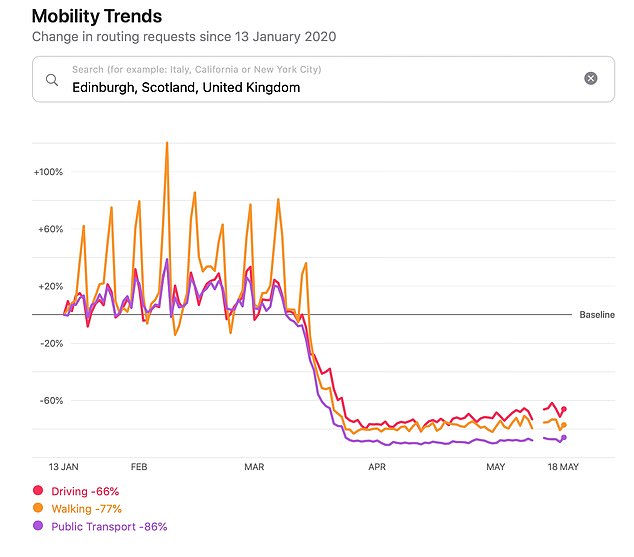 Edinburgh data from Apple shows an increase on Monday, though data for today is unavailable 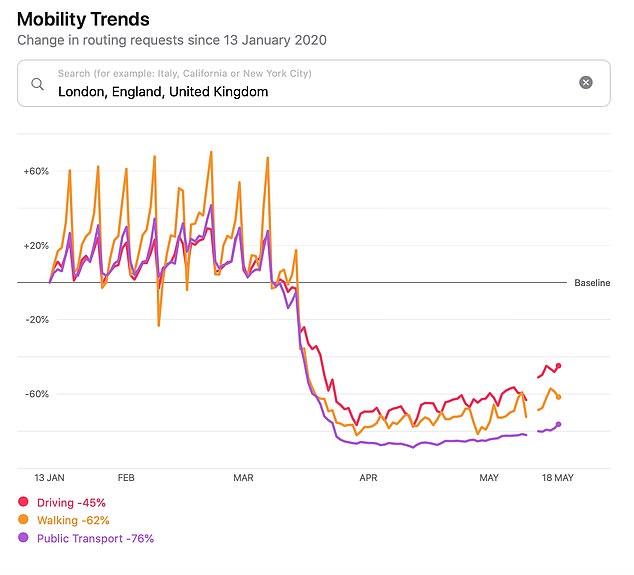 London data from Apple shows an increase on Monday, though data for today is unavailable 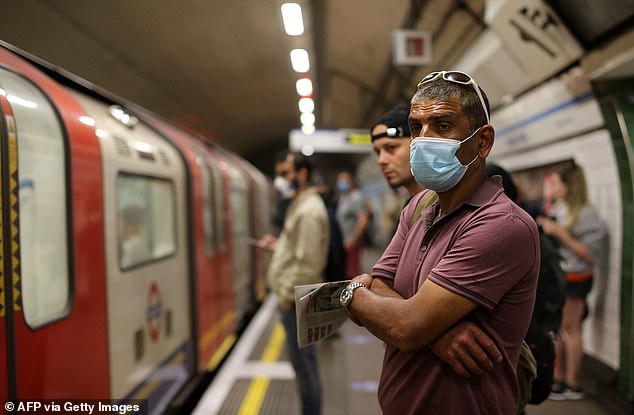 ‘People have spent the past few weeks caged in and probably just want to get out to enjoy the sunshine because being Britain, it won’t last.’

Neil Rees, who was boarding the Tube at Paddington said: ‘We love to make the most of good weather in this country because we don’t get enough of it.

‘Not many people have returned to work since the lockdown was eased and now there’s even fewer going to work because of this lovely weather.

‘It’s a good opportunity to pretend to be working from home when all you’re really doing is sitting in your garden soaking up the rays.’

TfL told MailOnline that during peak hours this week, it ran more than 75 per cent of services on the Tube – on average across the whole network.

London Mayor Mr Khan has been discouraging people from using TfL services unless it is ‘essential’ and should be wearing face masks.

A letter he published today called upon stores and supermarkets to help commuters access non-reusable face masks and coverings.

‘I would like to ask for your help with ensuring Londoners are able to access non-medical face coverings to help prevent the spread of Covid-19,’ Mr Khan said.

‘Although Londoners should stay at home as much as possible, I am asking those who must use public transport for essential travel to wear a non-medical face covering for the entirety of their journey.

‘I hope that Londoners will choose to wear face coverings when out doing their shopping, helping to keep you, your staff and their fellow customers safe.’ 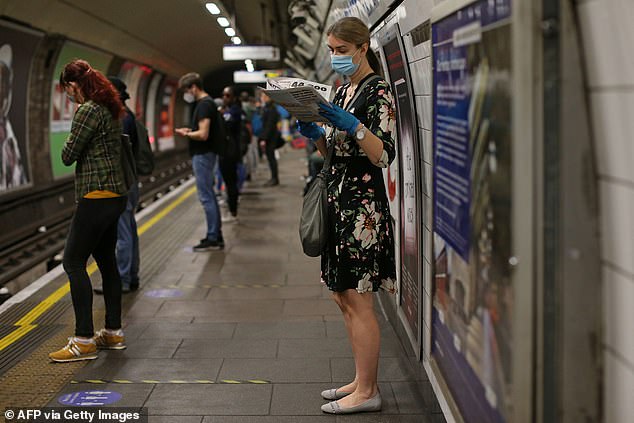 Although some people are using TfL services today, underground platforms are very quiet 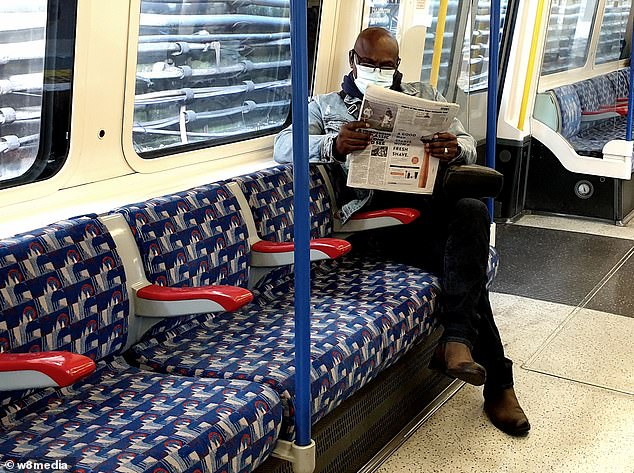 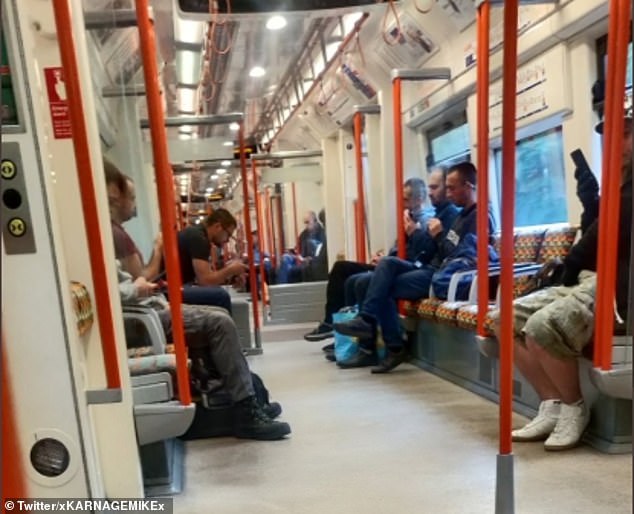 Signs at Canary Wharf station yesterday urged passengers to stay away during rush hour. Carriages on the Jubilee Line showed little room for social distancing as passengers sat next to one another, while bus passengers were forced to stand.

Mr Khan said that while City Hall is encouraging people to use homemade face coverings, there will be people who will want to buy ready-made ones instead.

But he stressed that the coverings should not be medical grade personal protective equipment (PPE) to make sure supplies are not diverted from NHS and care staff.

The British Independent Retailers Association (Bira) is also urging its members and the wider retail sector to stock up on re-usable face coverings to keep the public safe during the transition out of lockdown.

Working alongside Mr Khan, Bira CEO Andrew Goodacre is urging shops such as hardware stores to stock up to make sure there are enough to meet demand.

‘Independent retailers want to play their part in keeping customers safe and giving consumers confidence to return to the shops as and when they open,’ he said.

‘As they tend to sell PPE, we want to ensure local hardware stores ramp up supply to keep the public safe, to help people avoid needing to travel to the larger, more populated, out of town DIY stores to buy masks.’