A New York county executive made a hilarious gaffe when during a press conference that announced the reopening of tennis courts.

On Friday, Executive of Nassau County Lara Curran announced that tennis courts have reopened in time for Memorial Day on Long Island.

During a press conference held in Eisenhower Park, Curran gave a breakdown of how tennis courts would operate under social distancing guidelines.

But the press conference quickly went left when she began discussing how players should approach ball handling.

‘Every player, unless they’re from the same household, has to bring their own tennis balls so that you don’t touch other people’s tennis balls with your hands,’ she began.

‘You can kick their balls, but you can’t touch them!’ she says, pausing just long enough to realize the accidental innuendo.

Colleague and others who attended the press conference failed miserably to contain their giggles as Curran continued.

Curran begins laughing partway through, but regains her composure to finish out the press conference.

‘To avoid confusion between whose balls are whose, you can use a sharpie to put an X or someone’s initials on them,’ she said. 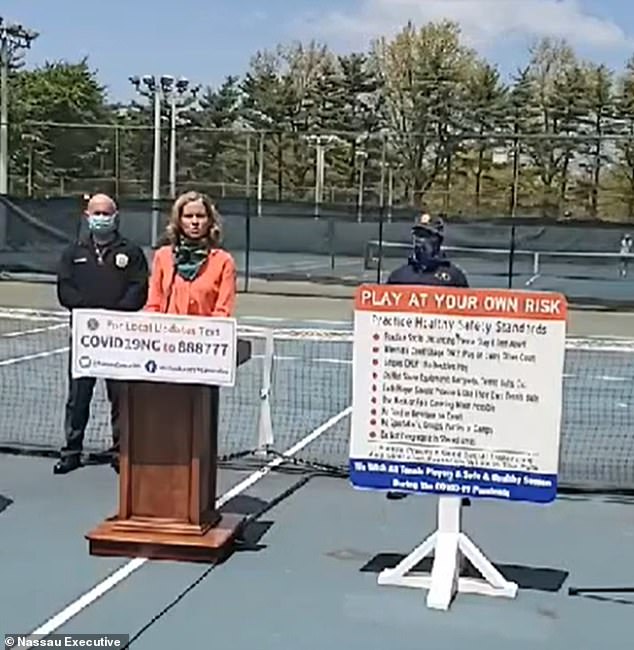 Footage of Curran’s press conference soon made it to social media, where thousands of people got a kick out of the conference.

‘This could be a cold open for #SNLAtHome,’ one amused user said.

Several users admitted to having a childlike humor.

Others took the opportunity to make some jokes of their own.

‘Honey, let me write my name on your balls I don’t play with the wrong ones,’ one person wrote.

‘I’m marking my balls with a Sharpie right now so I don’t get them confused with somebody else’s,’ another said.

JShapen: ‘I’m marking my balls with a Sharpie right now so I don’t get them confused with somebody else’s’

But the overall response was that people were grateful for a dash of humor amid the coronavirus pandemic.

‘I mentioned this to some of you yesterday,’ one woman wrote, ‘By far my favorite press conference during the pandemic. Nassau County Exec’s Tennis Ball Rule, Don’t Touch Other Player’s Balls!’

‘This is the kind of public advice I’m here for,’ one man said. 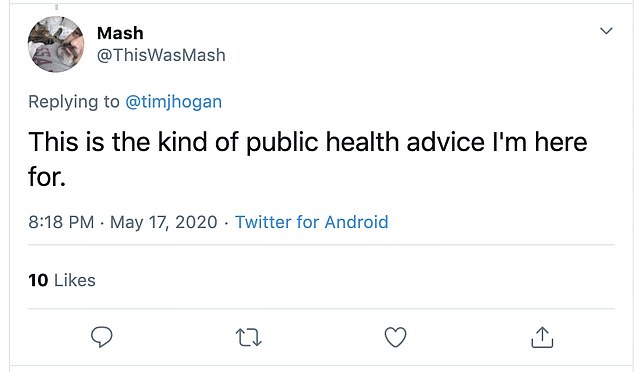 ThisWasMash: ‘This is the kind of public advice I’m here for’

One person wrote: ‘Too funny. Thanks I need this today!’

Curran added that Memorial Day car parade will be held in place of a usual festivities.

‘In order to make sure that we do honor our fallen, Nassau County will hold a Memorial Day car parade on Monday, May 25,’ she said.

‘The parade will lead right here to Eisenhower Park, to the veteran’s memorial.’