The president ‘cheats like hell’ when the two play together, she told a Norwegian newspaper – embellishing his scores, skipping short putts, replacing his ball and influencing his caddie to move errant shots from the forest to the fairway.

‘They say that if you cheat at golf, you cheat at business,’ Pettersen told the paper Verdens Gang on Saturday.

‘I’m pretty sure he pays his caddie well, since no matter how far into the woods he hits the ball, it’s in the middle of the fairway when we get there,’ she laughed. 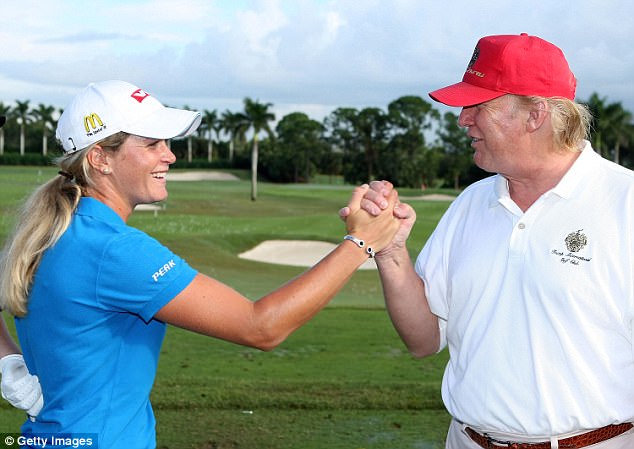 Trump and Pettersen are pictured in 2007 prior to the start of the ADT Championship at the Trump International Golf Club in West Palm Beach, Florida 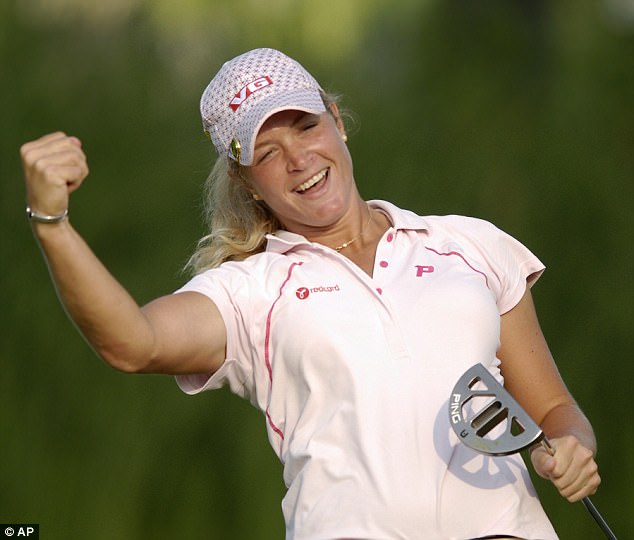 Pettersen quickly denied calling Trump a ‘cheat,’ while not denying her own specific examples that the newspaper reported in both Norwegian and English.

‘Sometimes you do interviews and media will twist whatever word/ saying to make a headline! It’s shocking to see,’ Pettersen tweeted. ‘This is what I would call #fakenews.’

‘Why would I call someone a cheat…. never!’

But she told the newspaper that while she has never seen Trump score lower than 80 in a round, he frequently boasts of shooting 69 and setting course records. 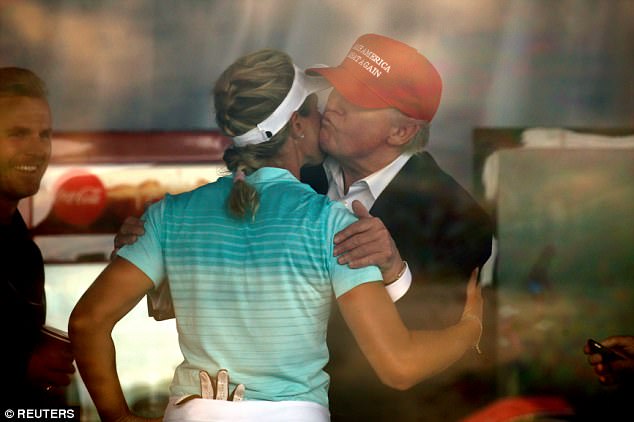 LONGTIME FRIENDS: Photographed through the glass of his personal enclosure, President Trump planted a kiss on Pettersen’s cheek at the U.S. Women’s Open golf tournament at Trump National Golf Club in Bedminster, New Jersey in July 2017

Pettersen has known Trump for more than 10 years. She hosted – and refereed – a televised match in 2010 between comedian George Lopez and boxer Oscar De La Hoya as part of ‘Donald Trump’s Fabulous World of Golf,’ a Golf Channel series that lasted two seasons.

She drew complaints in 2016 when she congratulated the president on the morning after he won a stunning election upset over Hillary Clinton.

‘Hats off for this man, @realDonaldTrump, Mr. president 🙂 congrats my friend! #thetrumpshowwillcontinue,’ she tweeted then.

‘I was only congratulating a friend for winning the presidential election in the United States, which after all is quite something,’ she said Saturday.

Pettersen, who has been ranked as the no. 2 female golfer in the world and has two LGPA major championships on her résumé, said she spoke with the future president about once a month before his move to Washington.

She described him as ‘totally golf-crazed.’

‘Golf is the only thing the man thinks about,’ Pettersen said. 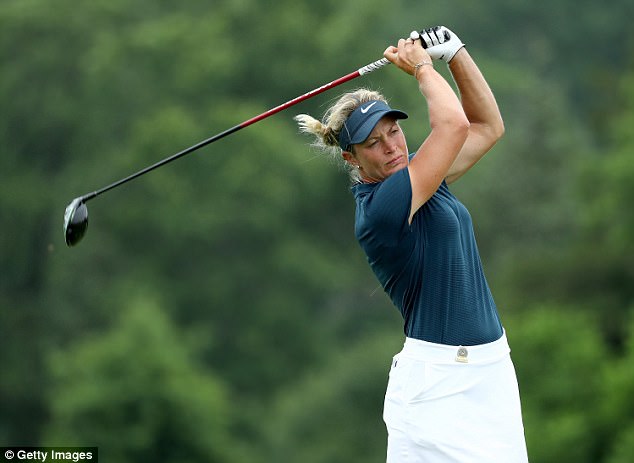 Pettersen watched her shot from the ninth tee during the U.S. Women’s Open round one last year 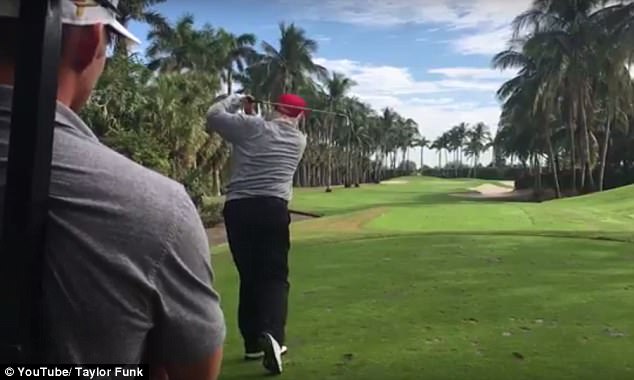 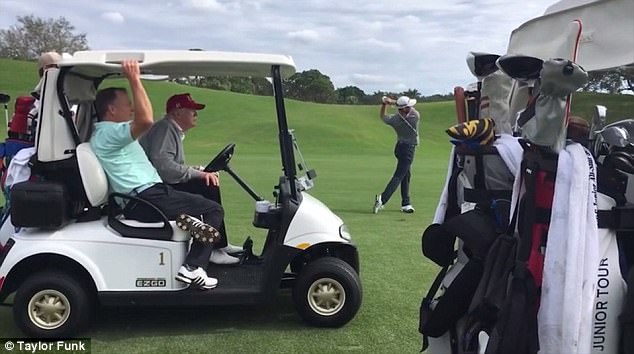 A White House spokesman did not respond to a question about how long it had been since the two connected.

Trump is known as an enthusiastic fan of women’s golf. His course in Bedminster, N.J., hosted the U.S. Women’s Open last year.

He has also counseled Pettersen on business deals, she said.

Trump has spent nearly 100 of his 375 days in office at his private gold properties. The White House has been coy about saying how often he actually plays.

But some of his trips to the links included playing partners that were too impressive to keep a secret.

In November he played with Tiger Woods and world no. 1 Dustin Johnson. Last summer he teed off with retired NFL legend Peyton Manning one week and Washington Redskins quarterback Kirk Cousins the next.

Pettersen got flak in 2016 for tweeting election congrats to Trump, whom she has known socially for a decade 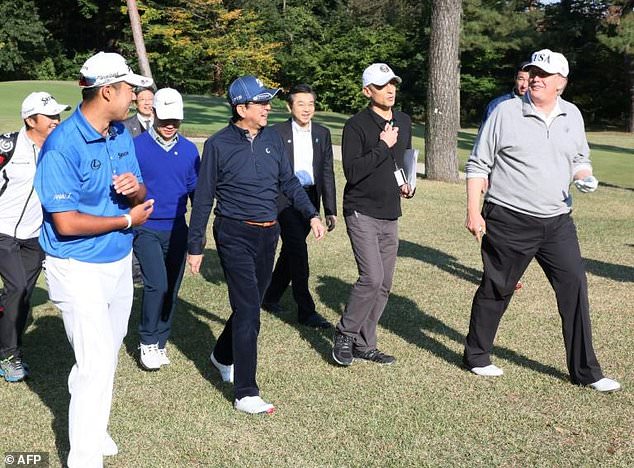 Trum played with Japanese Prime Minister Shinzo Abe two months ago in Tokyo, and Abe said the match was close

Other than longtime friend Richard Levine, his most frequent golf buddy has been South Carolina Republican Sen. Lindsey Graham.

Graham said in October that Trump ‘shot a 73 in windy and wet conditions’ at his Trump National Golf Club in northern Virginia.

‘How bad did he beat me?’ Graham tweeted. ‘I did better in the presidential race than today on the golf course! Great fun. Great host.’

Pettersen said Saturday that she separates her friendship with Trump from her disdain for his political positions.

‘I’m not a supporter of what he says or stands for,’ she said. ‘I thought it was very strange during the presidential campaign that he wasn’t smarter about how he communicated. He could have won more easily but made some blunders with his statements. That’s because he is so stubborn.’

‘He has not changed five millimeters since becoming president.’ 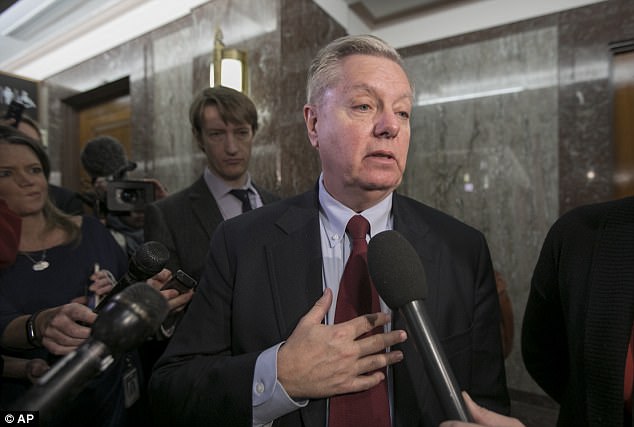