New York Mayor Bill de Blasio has said the city will still hold a July Fourth celebration with Macy’s despite the coronavirus pandemic but officials must figure out how to modify the spectacular event.

The Big Apple’s famous St. Patrick’s Day Parade was cancelled last month and the mayor announced the 50th anniversary Pride march would not happen this June due to social distancing measures put in place.

But Americans will get to celebrate Independence Day together in some way, de Blasio said Wednesday as he revealed the fireworks extravaganza will go ahead.

‘One way or another, the show will go on,’ he said in his #AskMyMayor video posted on social media. ‘There’s no day like the Fourth of July … and even if we have to do something different, we have to mark it in a meaningful way.’

Macy’s told DailyMail.com: ‘This year’s show will be a celebration of the strength and resilience of New York City and will honor frontline workers across America’

‘We will celebrate our nation’s birthday. The city of New York will partner with Macy’s to come up with something great no matter what the coronavirus throws at us,’ de Blasio continued.

The mayor explained that after a conversation with Macy’s Chief Executive Jeff Gennette, it was unclear how exactly they’d pull off the world famous spectacular but ‘what we know for sure is this wonderful show will go on’.

Macy’s told DailyMail.com in a statement Wednesday: ‘Since 1976, Macy’s Fireworks have lit the skies over many of New York City’s waterways and neighborhoods.

‘Together with our partners in the City of New York, we are reimagining how to safely share the nation’s largest 4th of July fireworks show with America again this year.

‘This year’s show will be a celebration of the strength and resilience of New York City and will honor frontline workers across America.’

De Blasio said it remains to be decided how and when the show can happen in light of whatever social distancing may still be necessary by Independence Day.

‘We’re going to figure out something we can do. We have to make sure it’s safe,’ the Democrat said. But he cast the plan as ‘part of our effort to fight back – to recognize a day of this importance, but to do it in a different way.’

The economic shutdowns have run retail companies like Macy’s into big trouble.

Macy’s is looking for $5billion to avoid bankruptcy, MarketWatch reports.

Cowen analysts report the company only has four months’ worth of cash available.

Macy’s stock was down 7.4 percent at Wednesday’s market opening. Over the past year, Macy’s stock has plummeted 80 percent. 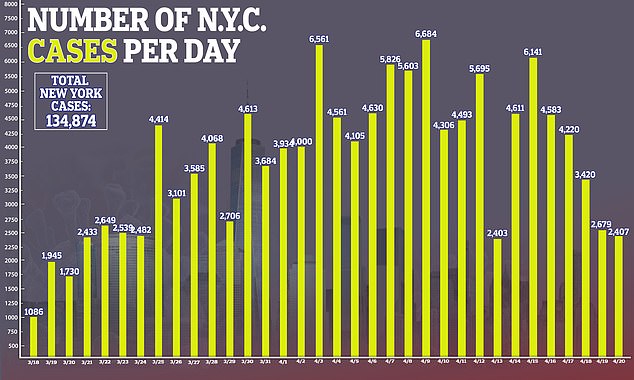 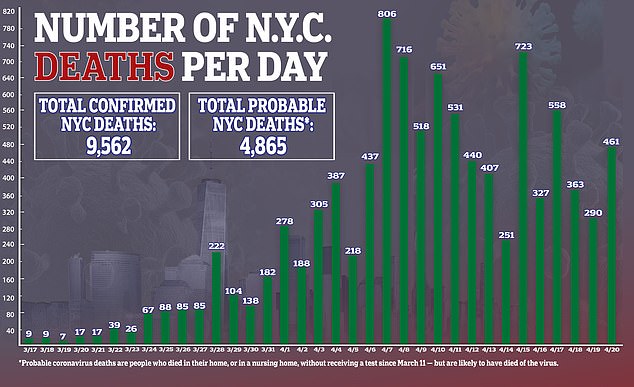 Critics recently hit out against de Blasio’s call for a celebration of New York healthcare workers and first responders when the lockdown ends, some fearing a second wave of deaths and infections.

‘Having a parade in New York City is one of the stupidest ideas I’ve ever heard,’ said Tapper during an interview with CNN’s Erica Hill, on Tuesday.

Many others took to social media soon after de Blasio’s announcement earlier that same day, referencing similar parades held in the US soon after the 1918 Spanish Flu quarantines were lifted, in which thousands perished.

The Puerto Rican Day Parade and the Celebrate Israel parade have also been canceled in New York City this year. All of the events require city permits.