Twelve miles of safety signage, about two miles of plexiglass and 2,000 hand-sanitising stations.

But, as MailOnline Travel discovered during a sneak peek tour today – not that different. 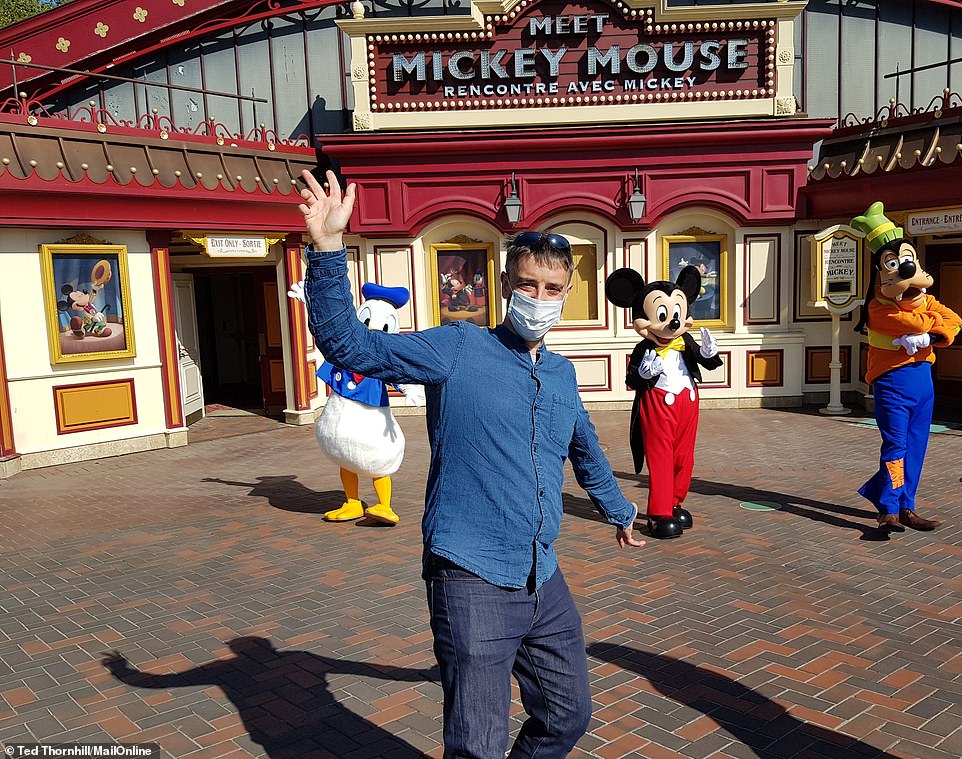 MailOnline Travel had a socially distanced character interaction with Mickey, Donald and Goofy 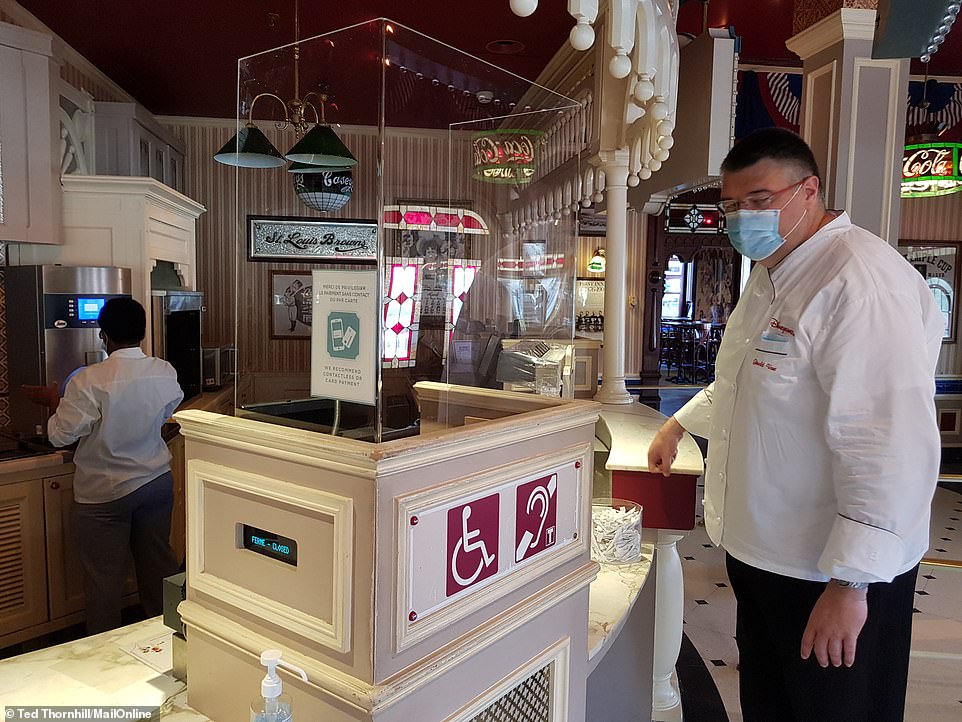 A plexiglass screen on the counter at Casey’s Corner, which MailOnline Travel can confirm, sells very good coffee

For anyone worried that the park’s cheerful and bright facades and thoroughfares are going to be marred by stern safety signs, worry not.

Everything looks as happy and magical as ever.

There are, of course, lots of said safety signs and social distancing alerts – on the walkways and at restaurant and ride entrances – but they’ve been blended in subtly. 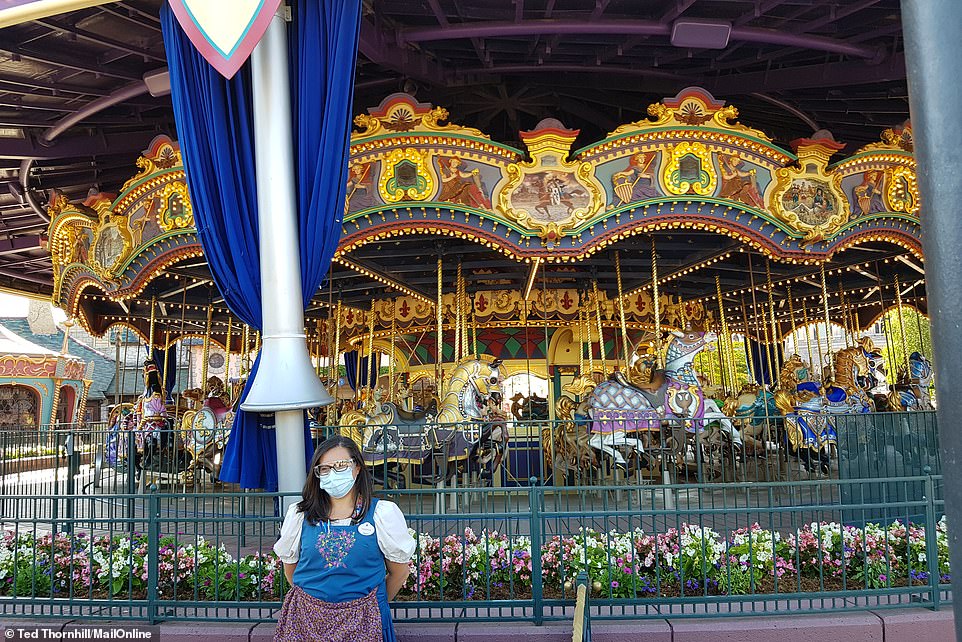 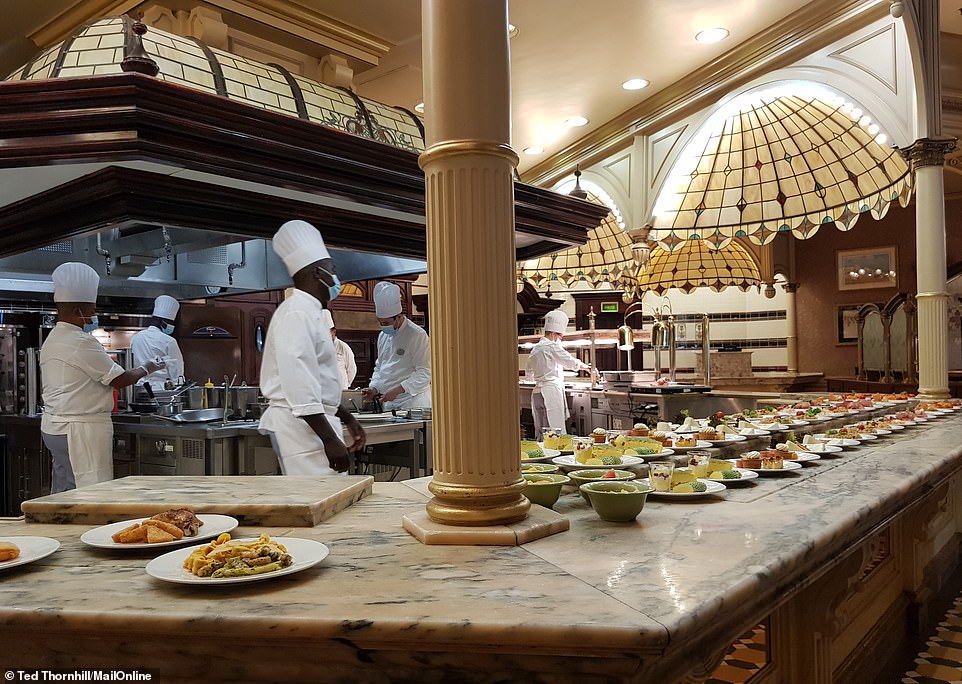 Buffets are out, all-you-can-eat table service deals are in. This is how they work – a waiter or waitress takes the order from a table and collects the pre-prepared dish from the counter. This image was taken during a demonstration of the service at Plaza Gardens Restaurant

There are also plexiglass screens – around reception desks and across take-away counters, for example – but they don’t ruin the atmosphere.

And the hand sanitisers are easy to find – but they won’t spoil those all-important shots of Sleeping Beauty’s Castle.

What will affect the Disneyland Paris photo album are the face masks, especially for those all-important selfies.

They are mandatory for all cast members and visitors aged 11 and over – except during meal times. Guests are encouraged to bring their own, but shops in the park will sell them – both the washable and disposable varieties. 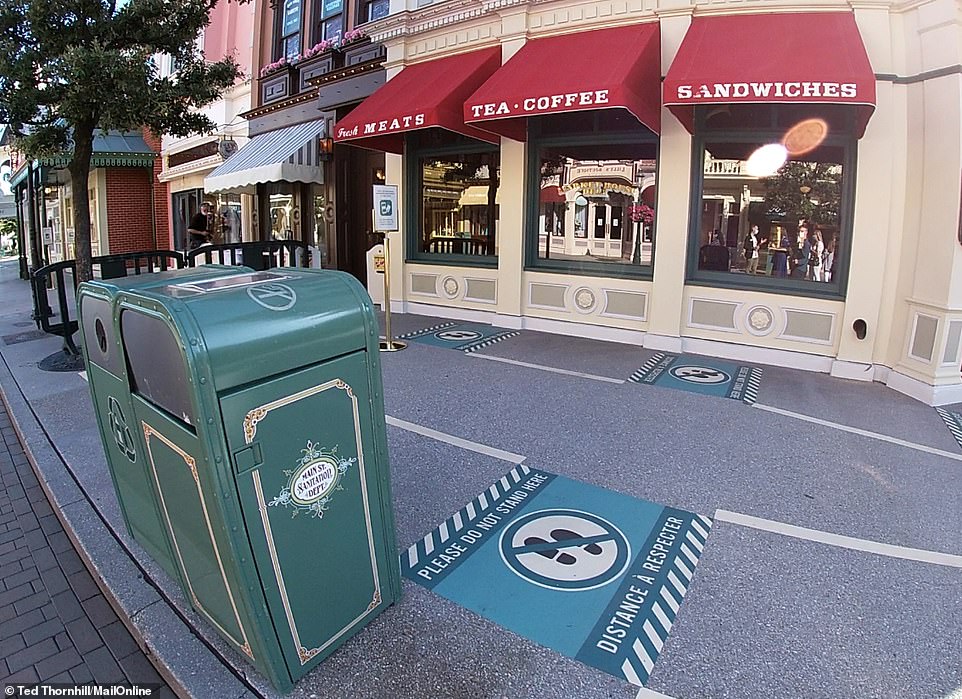 They can also be bought from shopdisney.co.uk.

The social distancing rule, meanwhile, means that character interactions have had to be tweaked.

But Disney has come up with some nifty surprises here.

Guests will be given a chance to take socially distanced selfies with characters, as Disneyland Paris Show Director Emanuel Lenormand explained – and demonstrated – on our tour. 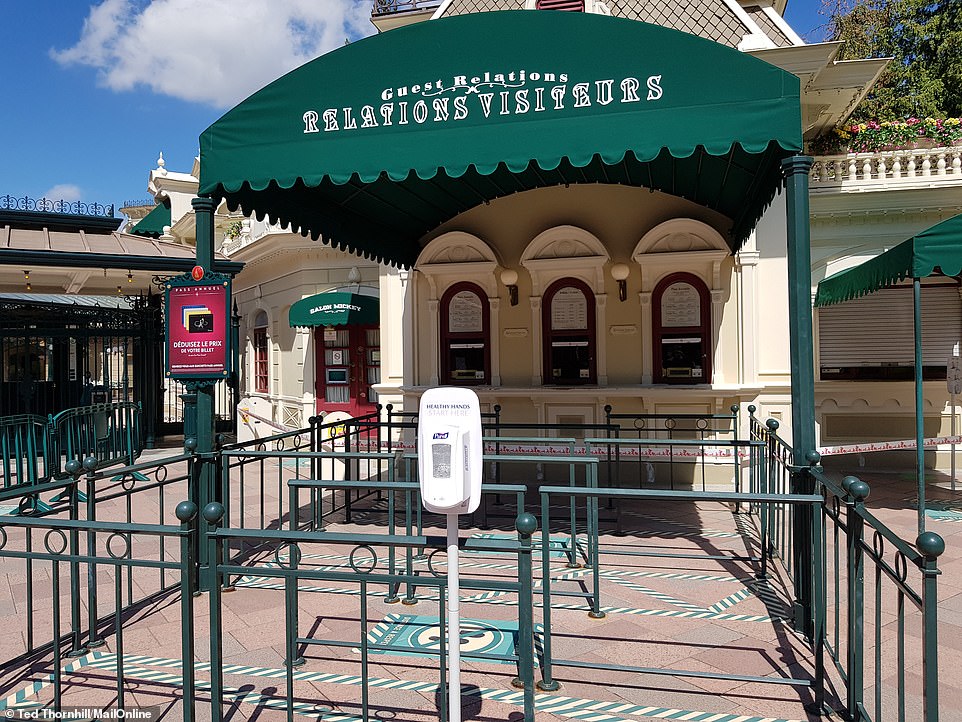 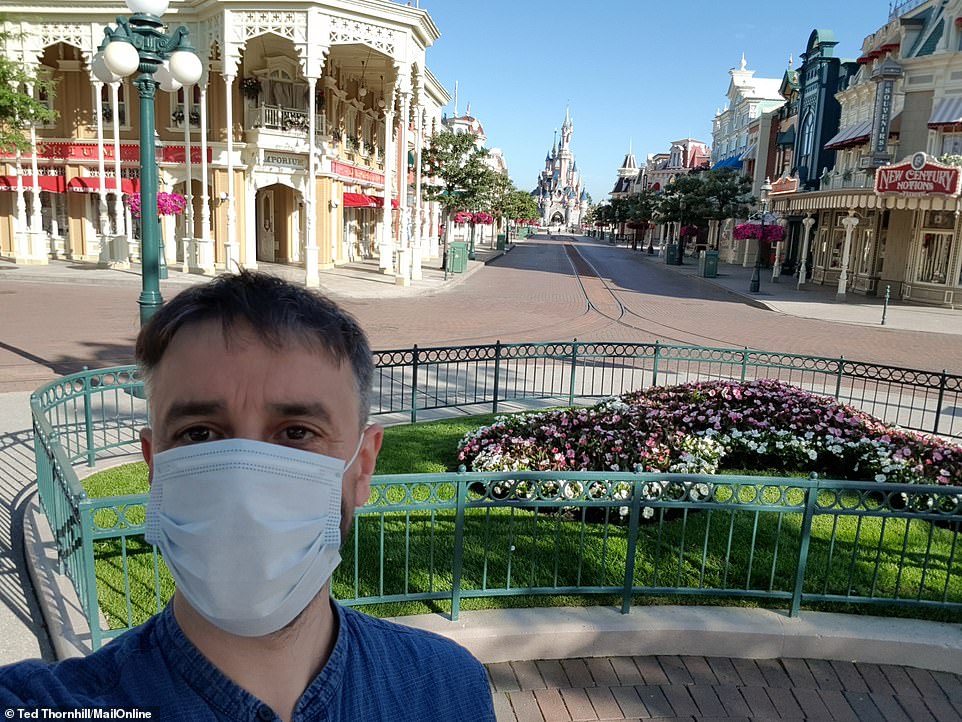 MailOnline experiences the magic, virus-free: A face-masked Ted takes a selfie in front of the Disneyland Paris main thoroughfare 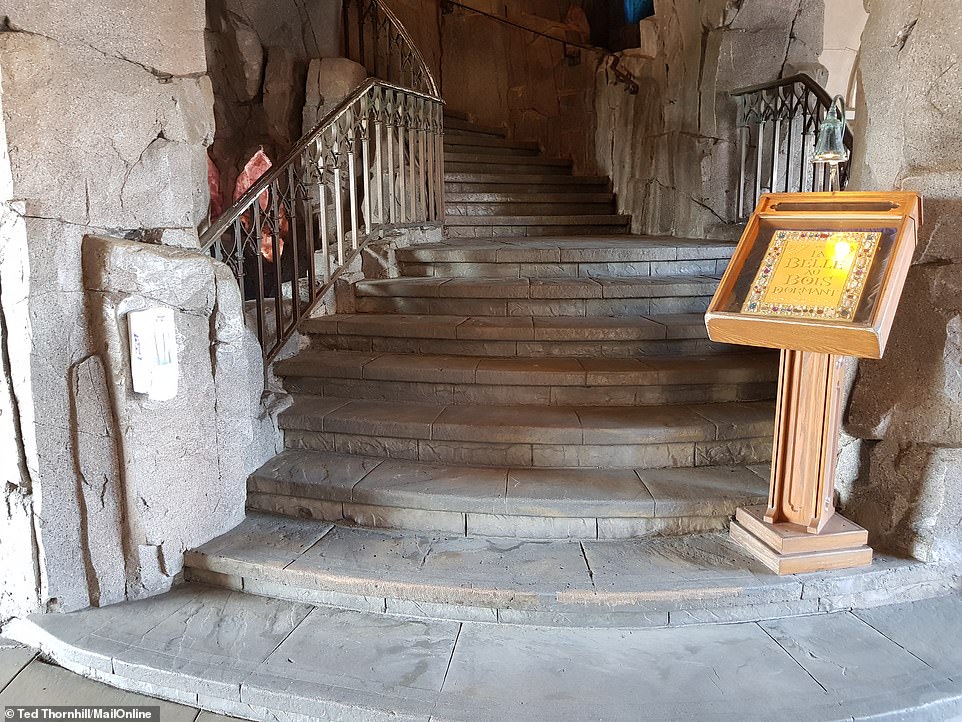 Guests can take this staircase to the first floor of the castle. And sanitise their hands at the bottom 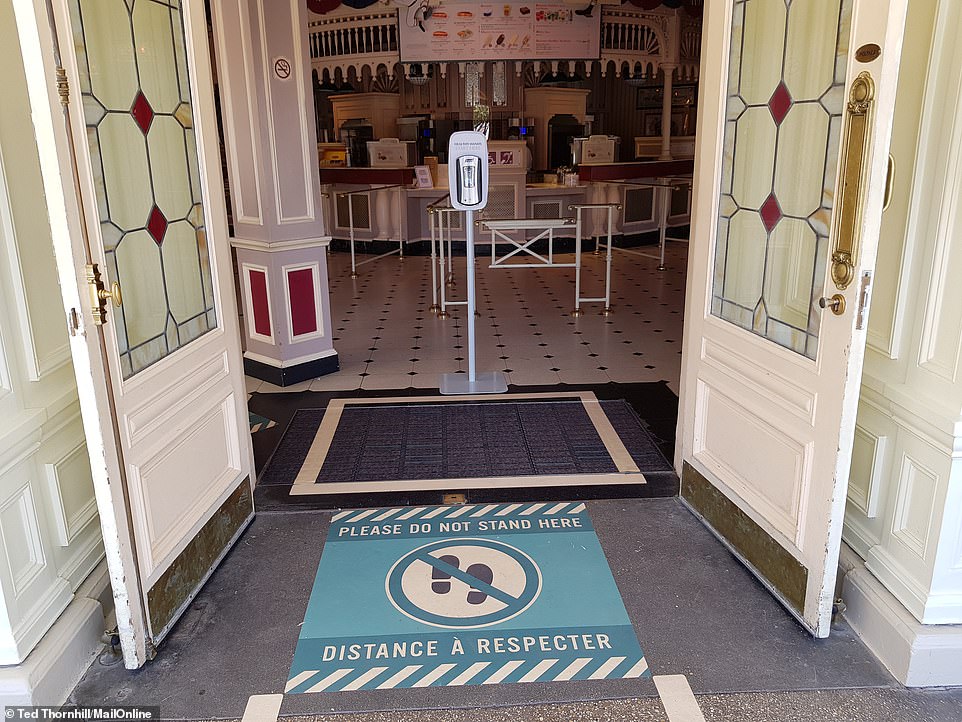 The entrance to Casey’s has a different look and feel to it now, thanks to the coronavirus pandemic 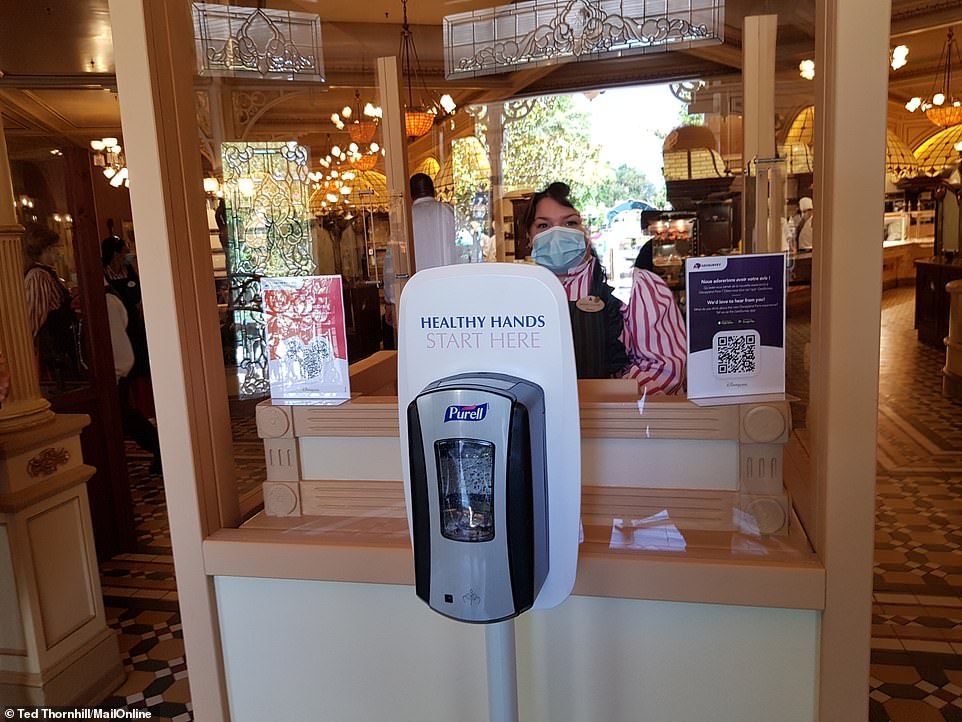 ‘And we’re transforming the Meet Mickey show, where Mickey will be onstage with his favourite pals and, once again – selfie spots.’

He also explained that photographers around the park would invite guests to take part in a ‘magic shoot’, where, for example, you might be asked to strike a pose with your hand out. 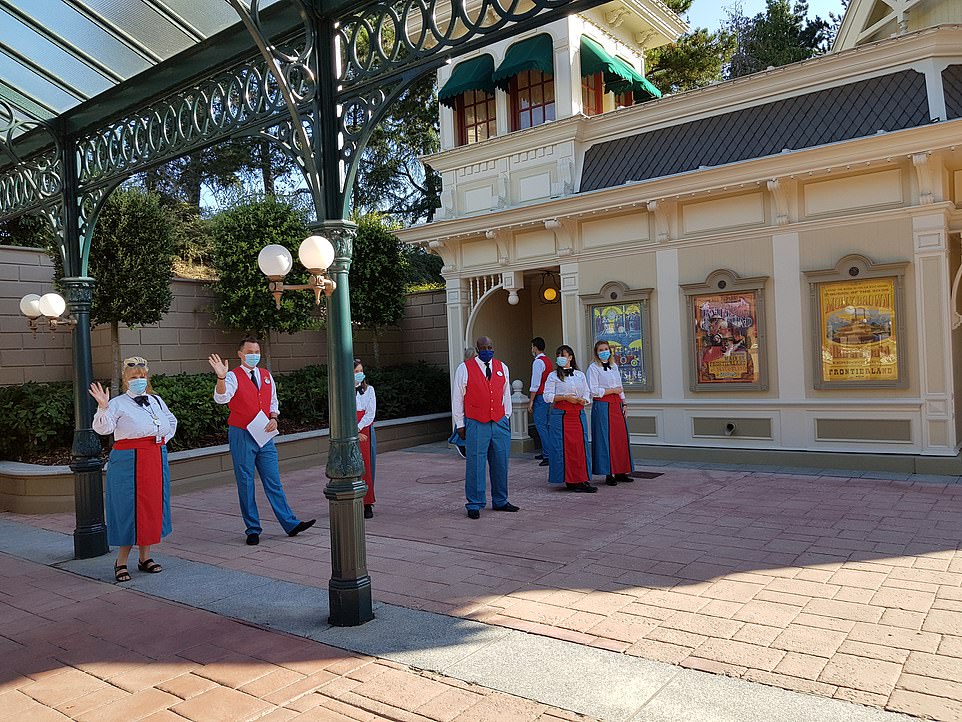 During the media tour, masked cast members waved – just a pity that their smiles weren’t visible 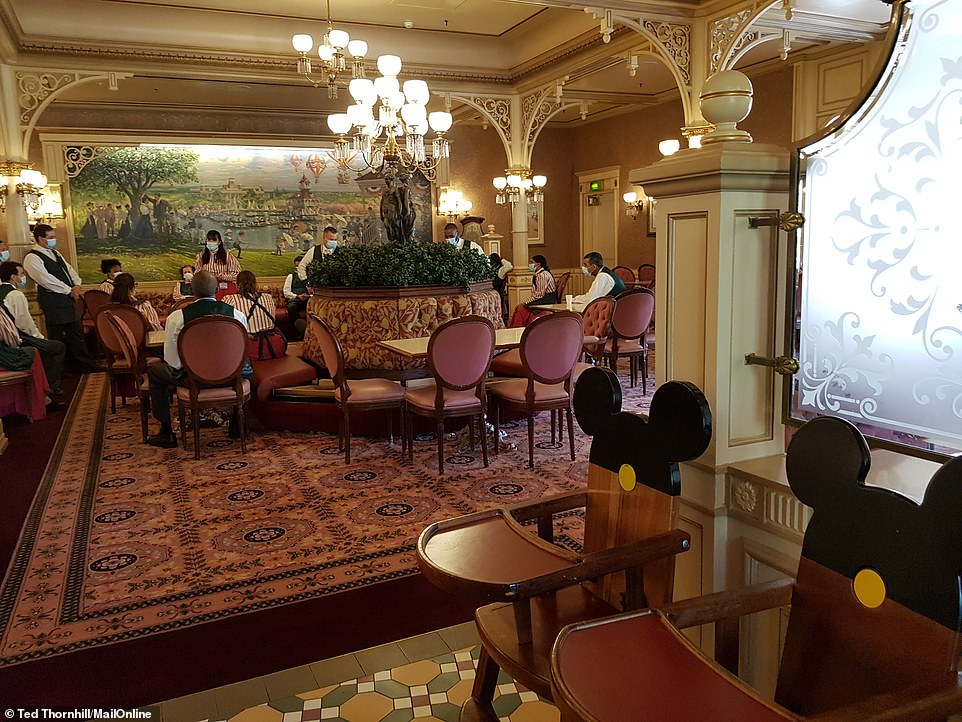 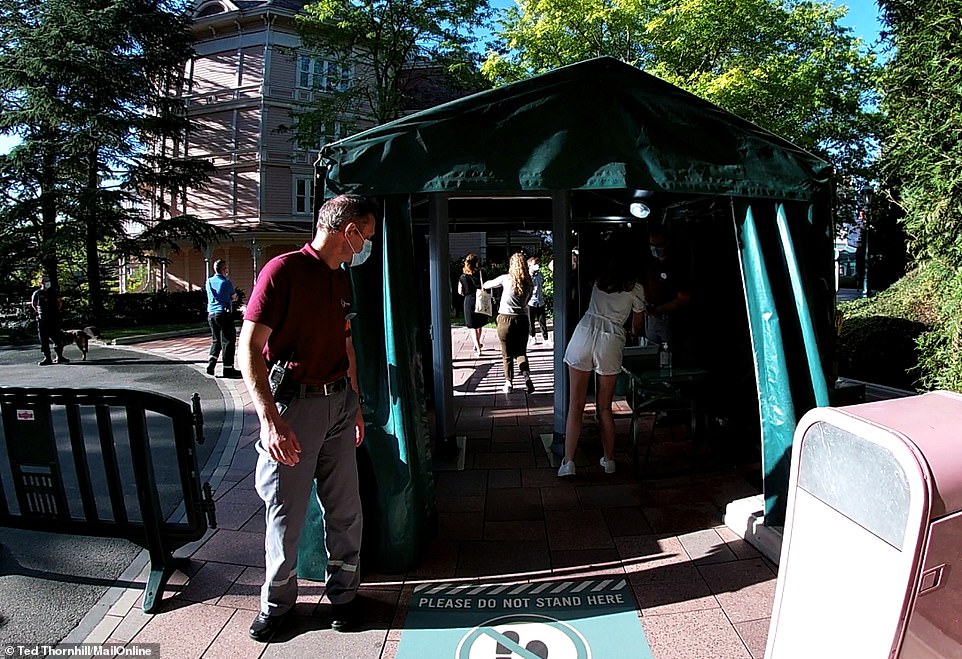 At the entrance to the park, security is tight and, of course, socially distanced

The sun never sets behind the front of the Disneyland Paris Sleeping Beauty Castle – that’s because it was built facing the arc of the sun’s east to west journey. So you’ll never have a backlight problem taking a photograph of it.

‘When you get the picture,’ he said, ‘you’ll find Tinkerbell sitting on your hands.’

Emanuel’s talk was interrupted at this point by three very special guests – Mickey Mouse, Donald Duck and Goofy, who bounded across for that all-important Disneyland Paris selfie.

And to show off their dance moves.

It was a joyous moment – one of many.

Everywhere we went groups of cast members, from cleaners to restaurant staff, cheerily waved (we just couldn’t see their smiles).

A few of the rides were whirring around – apparently on test runs to make sure they’re in good shape for the grand reopening – and chirpy music from various Disney productions wafted from loudspeakers as workers put the finishing touches to the paintwork and cleaners scrubbed trash cans.

I particularly enjoyed the chance to walk right through the castle all on my own – something that apparently is quite rare for non-staff members. 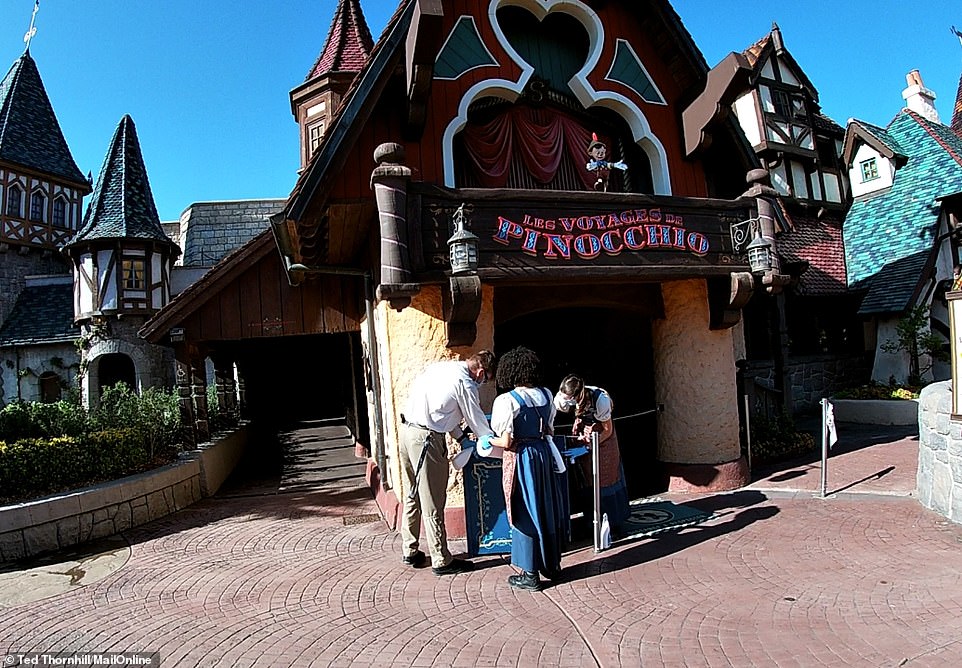 How many Disneyland Paris cast members does it take to clean a bin? Three apparently 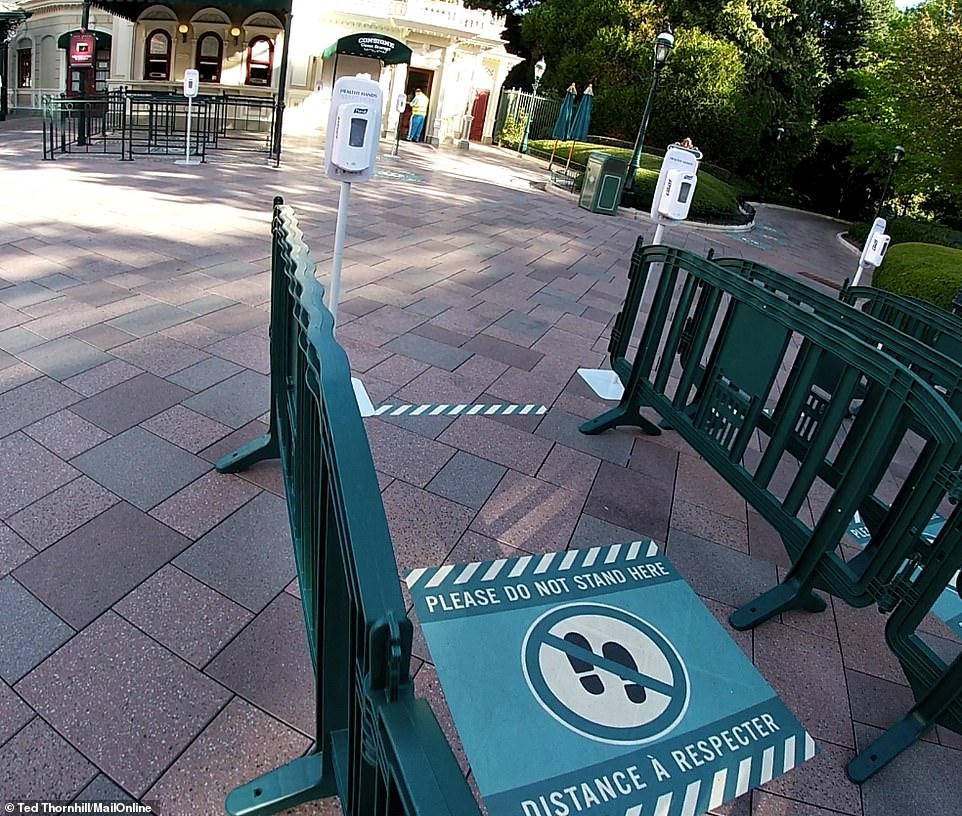 Single Rider and Fastpass services will be unavailable, along with makeover experiences, when the park reopens 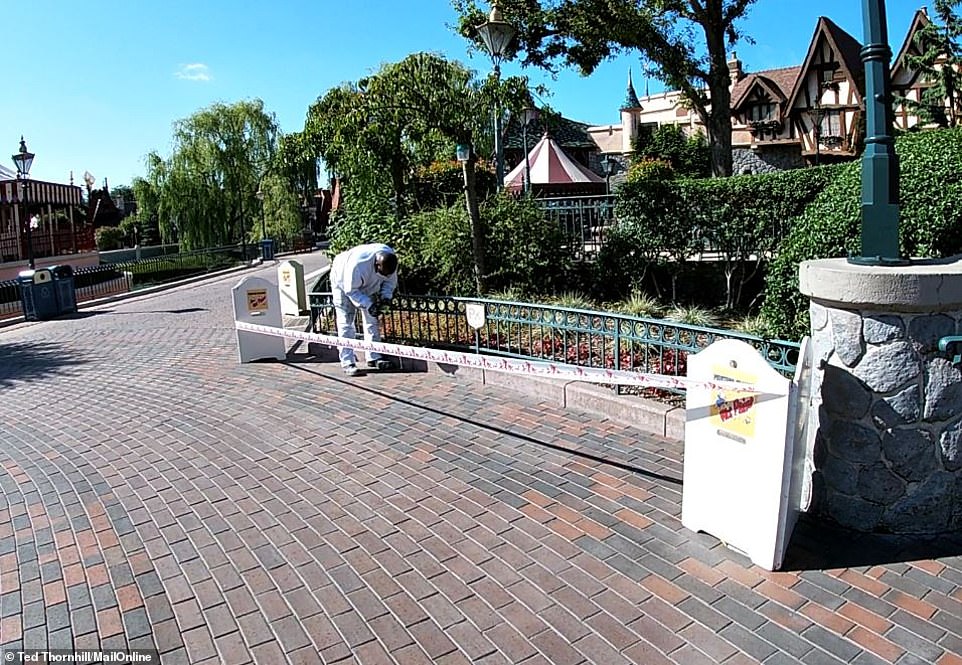 This worker was putting the finishing touches to a green railing today. The park was shut on March 15 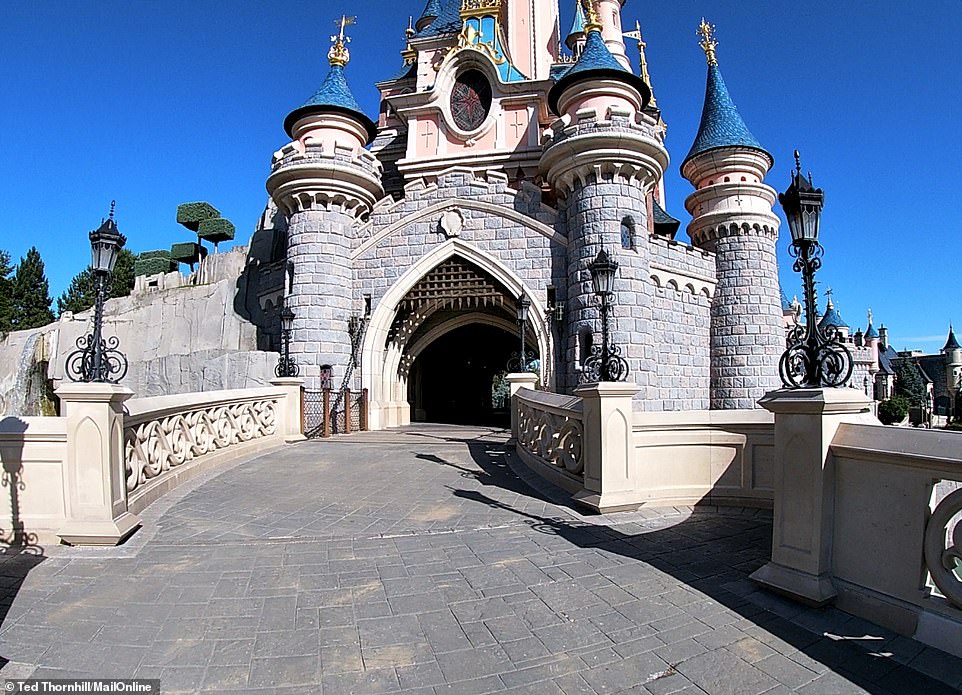 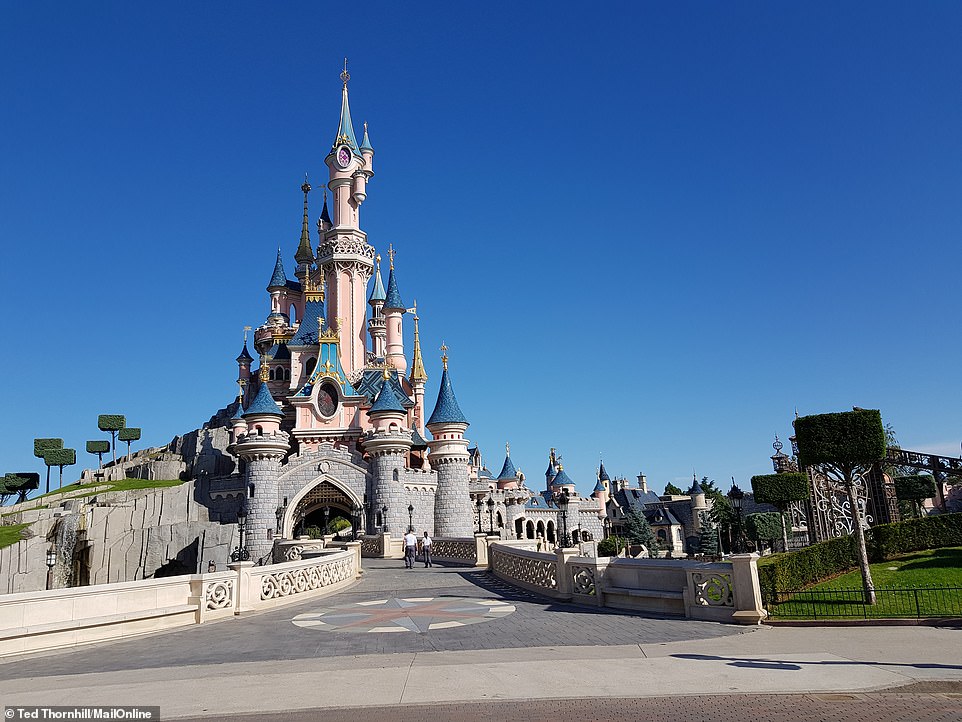 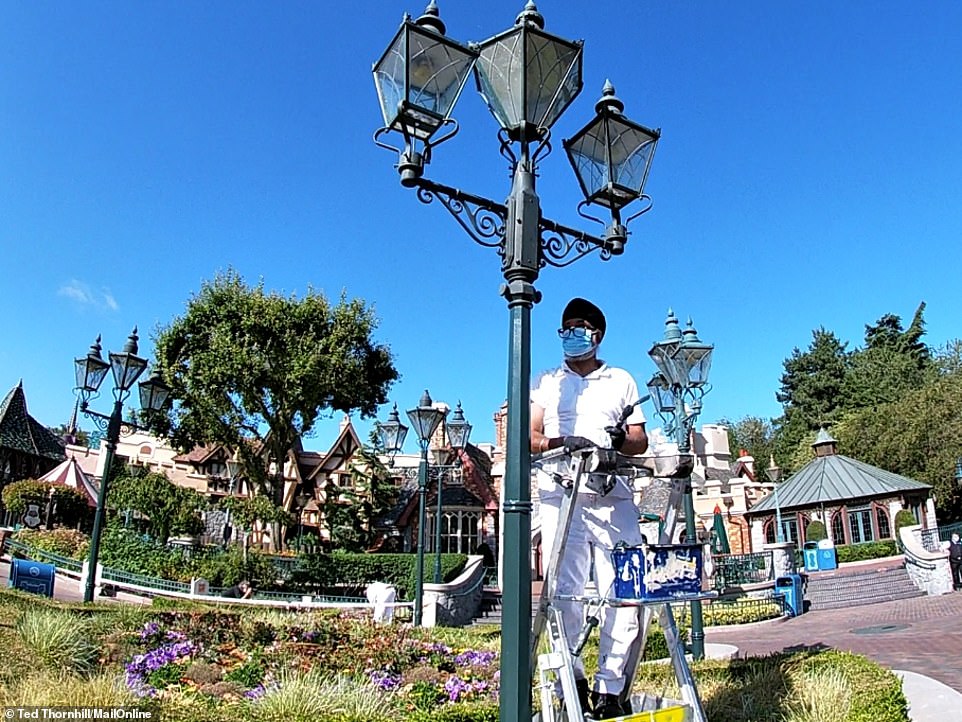 During lockdown, the ‘magic keepers’ kept the lawns trimmed, the flowers watered, the paint jobs glossy and the walkways clean. But there’s still a bit left to do before the grand reopening

My lasting impression was just how spick and span and pristine everything looked.

We were told that this was down to the hard work of the ‘magic keepers’, the workers who over the four-month lockdown kept the lawns trimmed, the flowers watered, the paint jobs glossy and the walkways clean.

Natacha Rafalski, President, Disneyland Paris, said in a pre-tour speech that despite all the changes, ‘the timeless magic and unique storytelling will remain’. 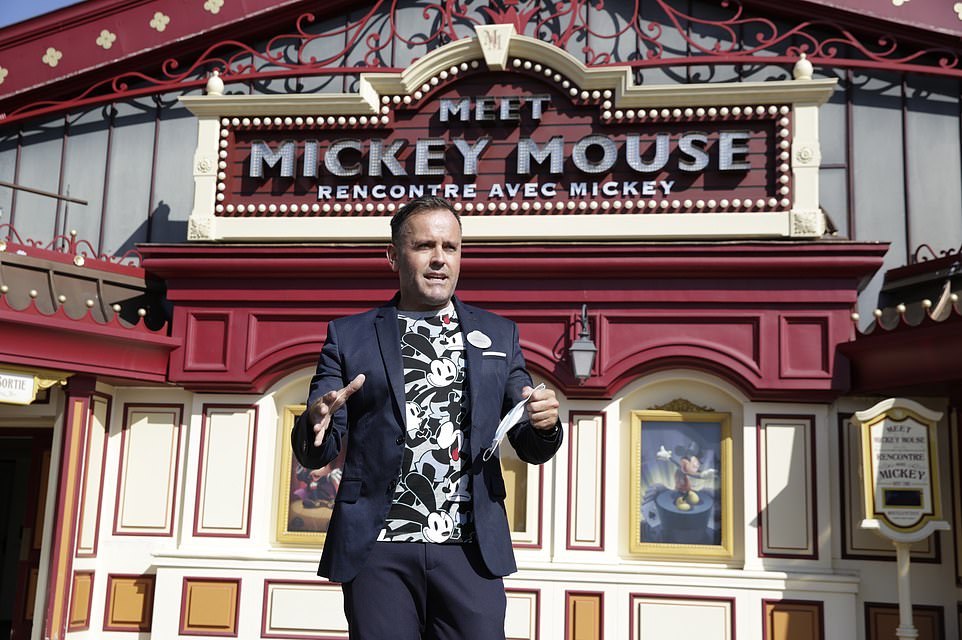 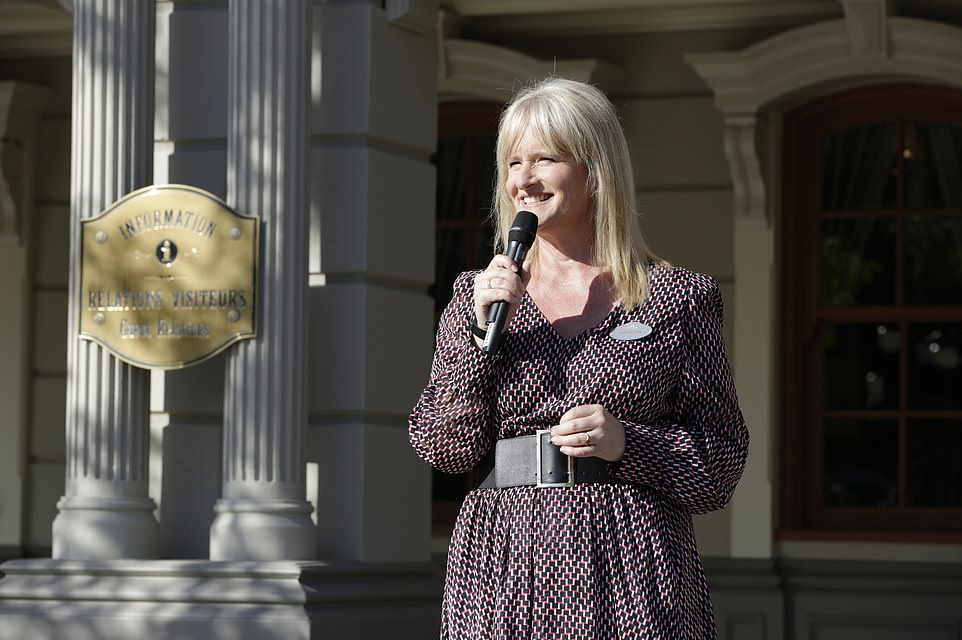 Natacha Rafalski (pictured), President, Disneyland Paris, said in a pre-tour speech that despite all the changes, ‘the timeless magic and unique storytelling will remain’ 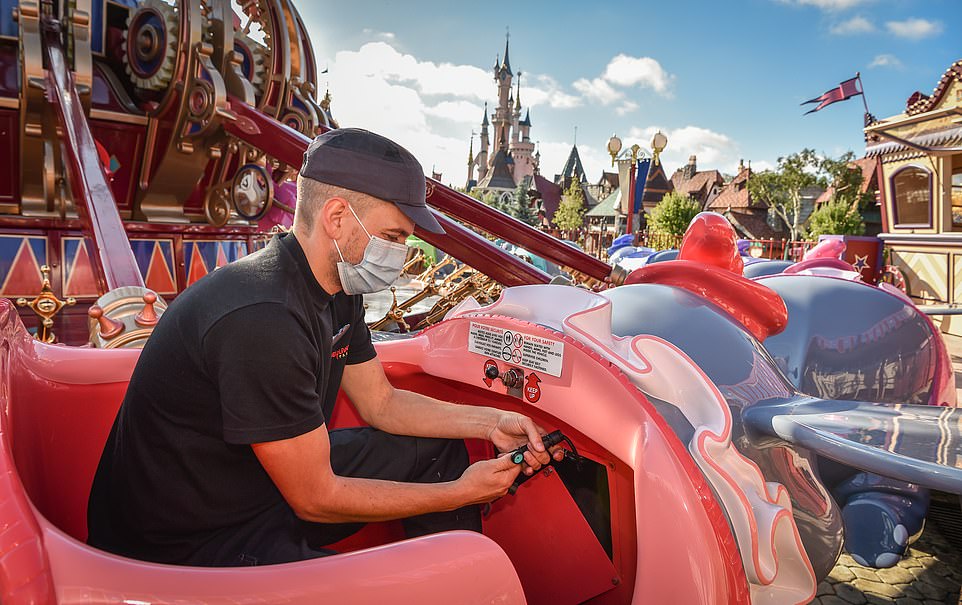 When the park reopens, all the rides will be operating, apart from those already shut for refurbishment 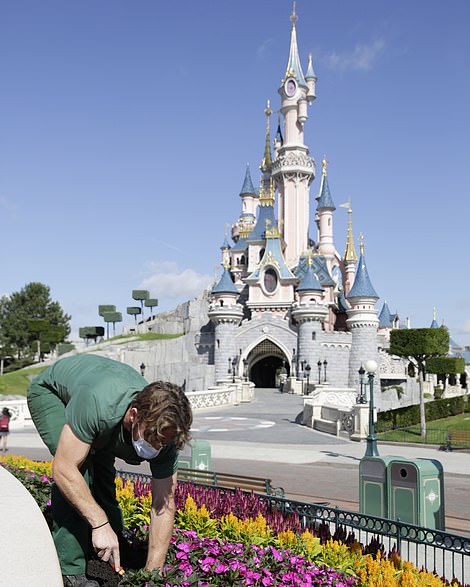 The sun never sets behind the facade of the castle

But she added that ‘some experiences are going to be adjusted’.

Single Rider and Fastpass services, for instance, will be unavailable, along with makeover experiences.

The Disney Parade is also not coming back for the time being and restaurant buffets will become new all-your-can-eat table service offerings.

Plus, you’ll need to reserve a table in advance.

However, those that go – and it will be best to book early as attendance is limited – will discover a Disneyland Paris full of the usual energy, goodwill and thrilling attractions.

All the rides will be open, The Lion King: Rhythms of the Pride Lands and Jungle Book Live shows are running, Alice will be hanging out with her friends at the labyrinth, Snow White will be by the wishing well and the castle is looking as timelessly mesmerising as ever.

Now, more than ever, a bit of cheer is needed and Disneyland Paris is ready to step up to the plate.

As Natacha said: ‘Creating memories that are going to last a lifetime has never been so meaningful and the magic of the Disney experience is more special now than ever.’

For those wanting to escape to the magic this year, Walt Disney Travel Company are offering a two-night stay at Disneyland from £306 per person, including accommodation at the 4-star Disney’s Newport Bay Club and access to the Disney Parks for 3 days for the whole party.

Price is based on two adults and two children (aged three to nine) sharing a Superior Room at Disney’s Newport Bay Club for two nights, with an arrival date of October, 2, 2020. Offer is subject to availability. All prices and itinerary correct as of July 9, 2020 and subject to change. Walt Disney Travel Company is a member of Abta and is Atol protected. Atol certificate number 10404.