If you were asked to picture a gamer, a vision of a lazy teenager slobbed out on the sofa may spring to mind.

But many of the world’s most successful gamers have turned their bedroom hobby into a career – and can earn millions for it.

So, what exactly does it take to become a professional gamer?

To find out, MailOnline’s Shivali Best went behind the scenes with Fnatic’s Counter Strike team in London’s Shoreditch this week to see how they prepare for a tournament.

Fnatic invited MailOnline’s Shivali Best to their training facility in London’s Shoreditch to see how their Counter Strike (CS:GO) team (pictured) prepares for a tournament

Fnatic was founded in 2004, and is now one of the most successful esports brands of all time.

It has teams competiting in eight of the top esports titles, and has won more than $16 million in prize money.

In 2020, Fnatic was the third most-watched esports brand.

‘Fnatic scouted and developed many of the pros who are now recognised among history’s greatest esports players,’ it explains on its website.

‘We’re constantly advancing our abilities to find and build the legends of tomorrow.’

Fnatic was founded in 2004, and is now one of the most successful esports (electronic sports) brands of all time.

It has teams competing in eight of the top esports titles, and has won more than $16 million in prize money.

Speaking to MailOnline, Stuart Brown, esports operation lead at Fnatic explained: ‘We have about 50 players, including the academy teams, and 30 staff members.

‘We have teams in pretty much all regions – two in Japan, one in Manila, Halo in North America, and facilities in London and Berlin.’

Fnatic’s Counter Strike (CS:GO) team is comprised of seven players, or ‘athletes’ as Fnatic calls them, as well as three members of staff, who are all on two to three year contracts with Fnatic.

‘We want to look after our players. In terms of the contracts, it’s very professional and they know they can rely on us for a steady source of income,’ Stuart explained.

‘But we’re also focused on performance, so in their contracts there will be performance accelerators and targets they must hit.

‘Much like traditional sports, your contract is usually two or three years, with those performance measures in it, and then we’ll look to renew it.

‘Players as young as 16 can sign for us, but generally the age range is 18-26 – it’s quite a small window to be a professional esports player.’

Most of the athletes became professional gamers after playing video games as a hobby at home.

Speaking to MailOnline, William ‘Mezii’ Merrian, who has been with Fnatic for one year, explained: ‘Like a lot of people, it was a hobby at first.

‘I watched the previous Fnatic teams and thought “I’m going to give it a go”, and it all just went from there.’ 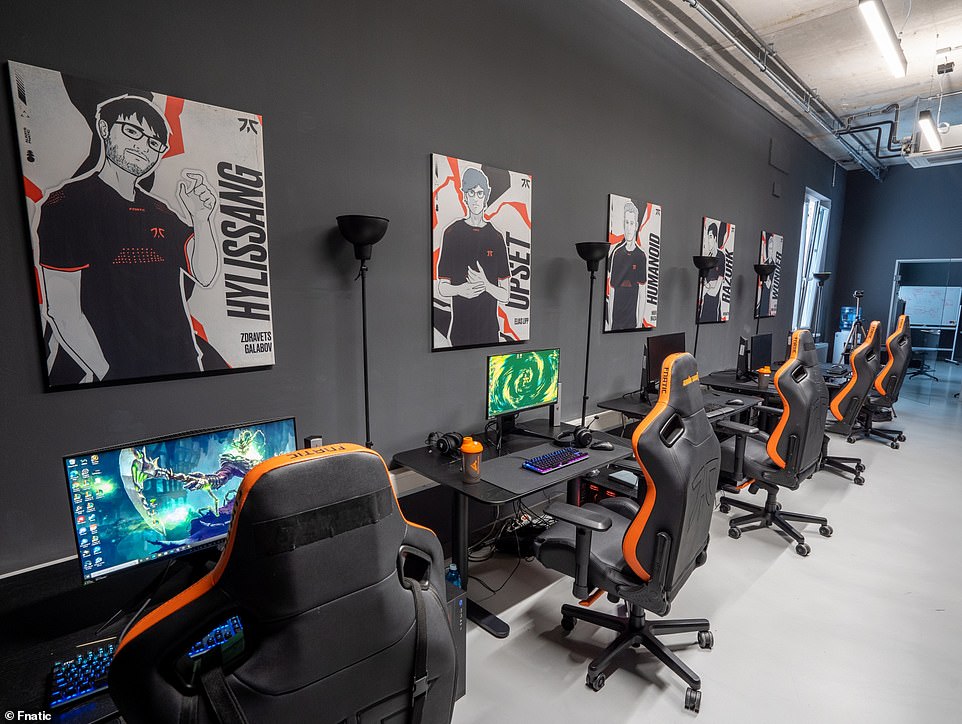 The players’ desks have been tailored to them, with each opting for a slightly different screen and keyboard orientations, and some even using personalised computer mice to suit their hand shape 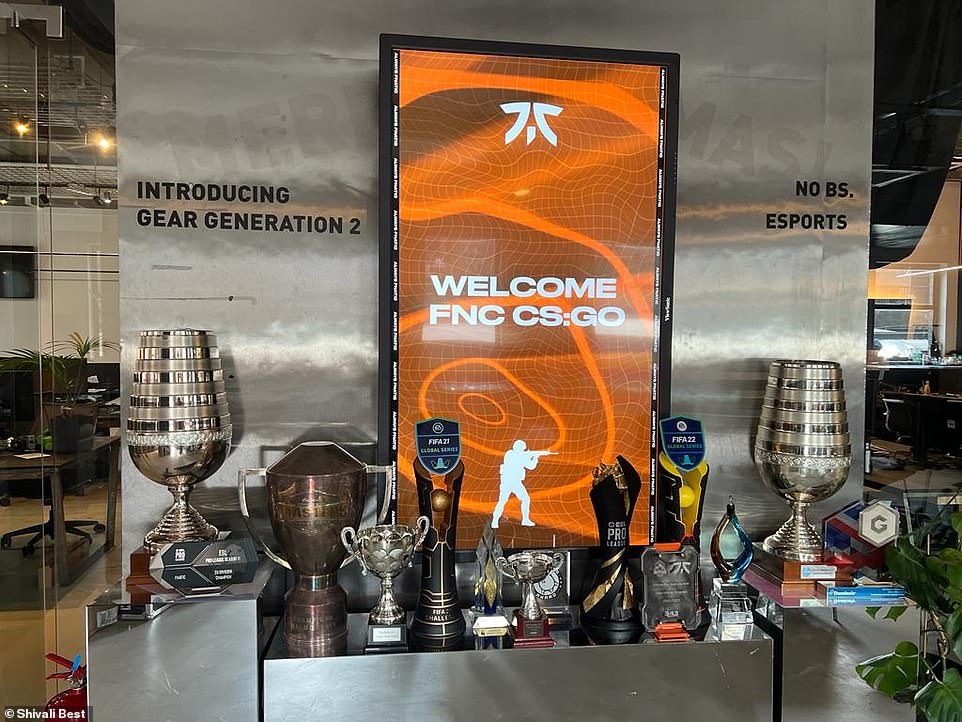 The team is comprised of seven players, or ‘athletes’ as Fnatic calls them, as well as three members of staff, who are all on two to three year contracts with Fnatic

William’s family was supportive of his decision to pursue a career as a professional gamer.

‘It was a lot easier for me than others,’ he said. ‘When I finished university and said I wanted to give it a go, my mum kind of thought it was a bit of a risk.

‘But once I got my degree I thought it was the perfect time to give it a go, and it worked out.’

However, it wasn’t quite as straightforward for other members of the team.

Nico ‘Nicoodoz’ Tamjid, who has only been in the team for 2.5 months, explained that his parents initially weren’t supportive of his decision to become a professional gamer.

‘I’m from a Persian family, so my parents didn’t take it well,’ he said. ‘My mum is really strict and wanted me to go to school and get an education, which was hard.

‘My brother helped me to convince her to give me a chance. When I was done with college, she told me “you have one year it make it” – and I did.’

The London HQ features a large reception area with sofas and a kitchen where the players can relax between their training sessions.

But most of the action takes place upstairs, where the players talk tactics before taking to their computers for practice games against other teams.

The players’ desks have been tailored to them, with each opting for slightly different screen and keyboard orientations, and some even using personalised computer mice to suit their hand shape. 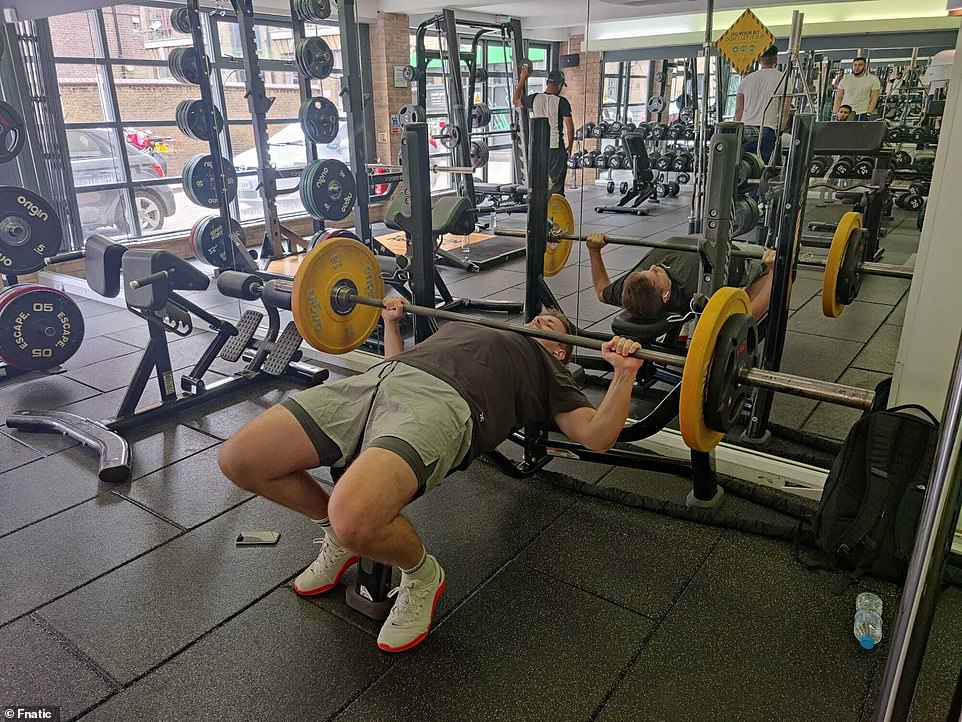 Physical training in the gym not only keeps the players fit, but also helps with communication and team spirit, according to William

‘To a lot of people, they think it’s easier than it is. Obviously you’re just sat down a lot of the day playing games, which is a lot of fun,’ William said.

‘But you can get very physically tired. You’re playing long hours, and especially with the game we’re playing, it requires strong focus and attention to detail.’

The team’s head coach, Jamie ‘Keita’ Hall, explained that as members of a Fnatic team, the players are under huge pressure to deliver results.

‘But it is a competition, there is pressure and you do have to deliver results.’

To supplement their training in front of the computer, the players follow a rigorous physical training programme.

Dion ‘Fashr’ Derksen, the newest member of the team, said: ‘It’s on the schedule to go to the gym together. If you’re fit physically, you’re fit mentally as well – and you need your mental state in the game. It’s super mentally draining.’ 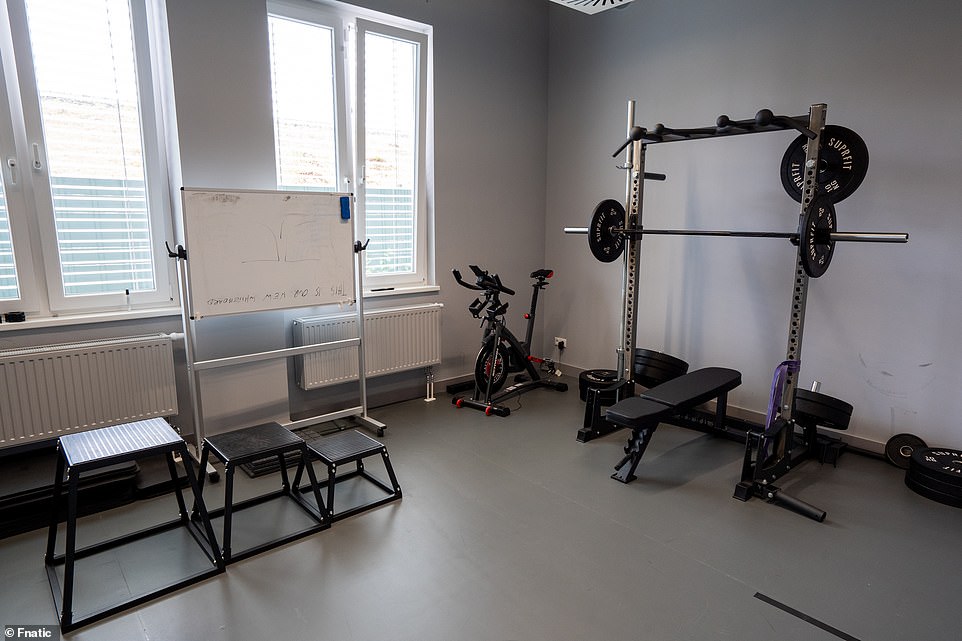 To supplement their training in front of the computer, the players follow a rigorous physical training programme. Pictured: the team gym at the Berlin facility 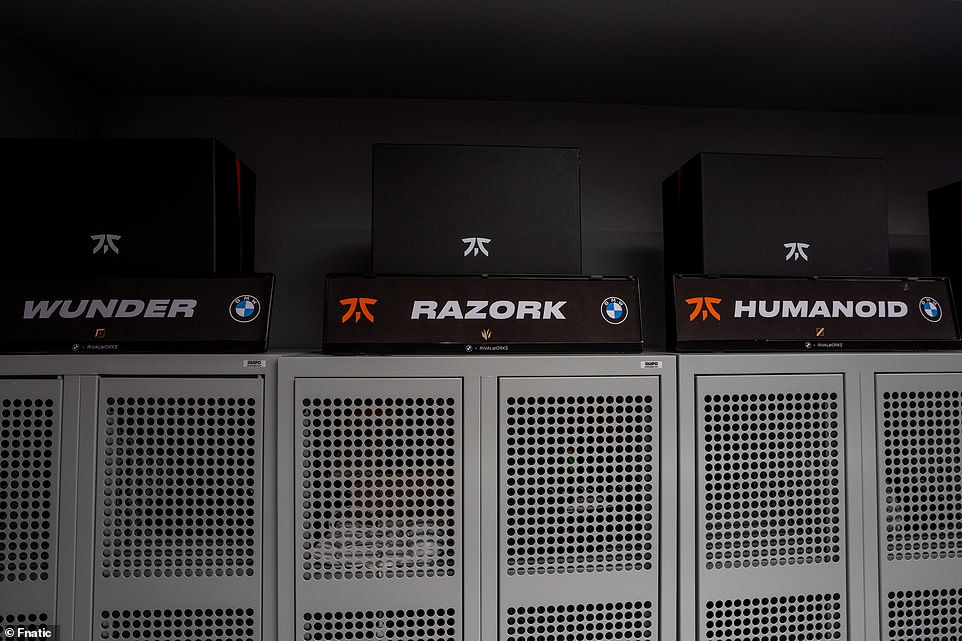 The team’s head coach, Jamie “Keita” Hall, explained that as members of a Fnatic team, the players are under immense pressure to deliver results

Will esports be added to the Olympics?

The International Olympic Committee stepped up their exploration of esports by sending an observer to the gaming events that were piloted at the Commonwealth Games in Birmingham.

Sportsmail revealed in February that a deal had been struck for the Commonwealth Esport Championships to run alongside the Games as a demonstration event on August 6-7, with the potential for esports disciplines to join the full medal programme in 2026.

Those developments stirred controversy among traditionalists, but the enormous, young audiences drawn to gaming has made it a compelling proposition for major sporting bodies, which includes the Olympics.

This physical training not only keeps the players fit, but also helps with communication and team spirit, according to William.

‘Usually on game days we go to the gym in the morning as a team, and then usually around half an hour before the game we do a little walk or even kick about a football. It improves communication and team spirit,’ he added.

The players also follow a strict diet while preparing for a tournament – and junk food is a ‘no go’.

‘We agree on no sugar, no burgers, no fries, no pizza,’ Dion explained. ‘Just like a normal athlete, but we play games instead.’

William added: ‘If we’re just filling up on sugar our focus levels and attention will be spiking up and down.’

While esports are becoming more and more mainstream, there’s still a distinct lack of women, with all 50 of Fnatic’s professional players being male.

In fact, a study by Mr Gamble found there’s a huge pay gap between male and female pro-gamers in the industry, with the top male gamers earning a whopping 1,556 per cent more than the top female player.

However, Patrick Sattermon, Chief Gaming Officer at Fnatic and a former player himself, says it’s ‘inevitable’ that Fnatic will sign up women in the future.

‘Historically, we’ve had female-specific rosters,’ he said. ‘But I don’t see why in esports, where we talk about the human mind, hand-eye coordination, and being a good teammate – that’s universal, gender is not a factor.

‘I don’t see why you need to compete separately. I like to be a driving force to uniting everything under one ceiling. We need to make the workplace more inclusive and improve the online environment [for women].’

As for the future of esports, many of the players hope to see it added as a sport at the Olympics in the near future, which would help to solidify its standing as a real sport.

‘The whole esports world is getting bigger and bigger, and it would be great to be in the Olympics,’ Nico said.

‘In 5-10 years I think it will be as big as regular sports. People just have to accept it more and more, which they are doing, but we’re not there yet.’

If you’re considering a career in esports, head coach Jamie says it’s all about putting the hours in.

‘All these games are now at an extremely high level. As with other sports like football, if you really want to make it to the top, there’s only 0.01 per cent of people who make it,’ he advised.

‘So you really have to treat it like it’s a real sport and a real job – almost be a student, putting in the time to really hone your craft.’

WHY HAS THE WHO CLASSIFIED INTERNET GAMING AS A MENTAL HEALTH DISORDER?

The World Health Organisation has classified playing video games on the internet as an official mental health disorder.

‘Gaming disorder’ is defined as ‘a pattern of gaming behavior characterized by impaired control over gaming, increasing priority given to gaming over other activities to the extent that gaming takes precedence over other interests and daily activities, and continuation or escalation of gaming despite the occurrence of negative consequences.’

To be diagnosed with gaming disorder, the individual must:

(2) Have experienced this impairment for at least 12 months

WHO advises gamers to be mindful of how much time they spend playing, especially if it is to the exclusion of other daily activities.

They should also be alert to changes in their physical or psychological health and social functioning which could be attributed to gaming.