Malaria could be wiped out by HERMAPHRODITE mosquitoes

Malaria could be wiped out by HERMAPHRODITE mosquitoes: Scientists genetically modify the bugs to have male mouths too small to bite

Scientists have found a way to genetically modify mosquitoes which could help eradicate diseases such as malaria.

Experts at a top-secret laboratory in Terni, Italy, believe that gene-editing the insect’s DNA to make them more male – or intersex – is the answer.

This is because only females have mouths big enough to bite human beings, which continues the spread of infections including Zika and Dengue Fever.

Thus, by diluting the female characteristics, the mosquitoes become impotent.

Nearly half the world’s population is at risk of malaria, with around 212million cases and 429,000 deaths in 2015 alone, according to the World Health Organization.

Body language: Experts at a top-secret laboratory in Terni, Italy, believe that gene-editing the insect’s DNA to make them more male is the answer

According to a report by the National Public Radio, tweaking the creature’s sexual development could save countless lives – particularly in Africa.

Specifically, entomologist Ruth Mueller – who runs the operation – says that using a gene-editing technique called CRISPR gives the mosquitoes with a ‘gene drive’, which she describes as a ‘selfish’ piece of DNA.

Typically, traits are only passed-on to half of mosquito offspring, but this gene drive causes all progeny to inherit the modification.

In turn, the females develop smaller mouths with stop them from biting. Their reproductive organs are also ‘deformed’, so they cannot lay eggs.

‘The females become a bit more male,’ Mueller says. ‘A kind of hermaphrodite.’

Animal and environmental activists have criticised the initiative, but Mueller insists that modified mosquitoes would only affect one of hundreds of mosquito species. 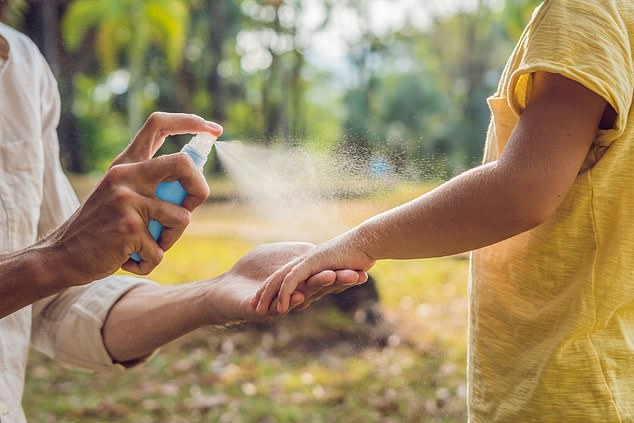 Risk: Nearly half the world’s population is at risk of malaria, with around 212million cases and 429,000 deaths in 2015 alone, according to the World Health Organization

But experts insist the test is ethical because it remains in a controlled environment.

Currently, the sample mosquitoes are kept in secure conditions. Only if they were deemed safe would they be released into African villages, where they could spread their self-destruct gene and slash the insect population.

Supporters, including The Bill & Melinda Gates foundation, believe the benefits outweigh any negatives, which could include pollination issues.

‘There’s going to be concerns with any technology. But I don’t think you should throw out a technology without having done your best to understand what its potential is to be transformative for medicine.

‘And, were it to work, this would be transformative.’

Researchers found the insects given drugs containing NPY-like receptors were less likely to suck blood when they were presented with a human arm.

These receptors regulate appetite in everything from roundworms to humans, and are even used in experimental anti-obesity medication to curb our desire for food.

Scientists believe if female mosquitoes could be coaxed into receiving these drugs, it may help control deadly diseases with limited treatment options.

The research, detailed earlier this month, was carried out by The Rockefeller University in New York and led by Professor Leslie Vosshall, from the laboratory of neurogenetics and behavior.

After a female feeds, she stops seeking blood for several days while she allows her eggs to mature.

Certain peptides – which make up proteins – have been shown to activate NPY-like receptors. These suppress a mosquito’s appetite after she has fed.

NPY-like receptors have also been shown to influence food intake, fullness and obesity in humans.