Horrified Christmas shoppers looked on in horror this morning as a man was stabbed in a busy London street.

The victim, who is in his 20s, was set upon in the busy Chiswick High Road, west London shortly after 11am today.

Police are hunting the attacker and are awaiting news from the hospital on the extent of the victim’s injuries.

Locals reported a police helicopter flew over the scene to help officers track down the attacker, who is still at large.

A witness tweeted: ‘Holy sh**, someone got stabbed on the High Street while I was shopping, I’m shook.’

A spokesman for Hounslow police said: ‘Police were called at around 11.2hrs on Friday, 21 December to reports of a stabbing in Chiswick High Road, Turnham Green. Officers attended along with the London Ambulance Service.

A man, believed to be in his 20s, was at the scene with stab injuries. He has been taken to hospital – we await an update on condition.

‘No arrest have been made and enquiries continue. 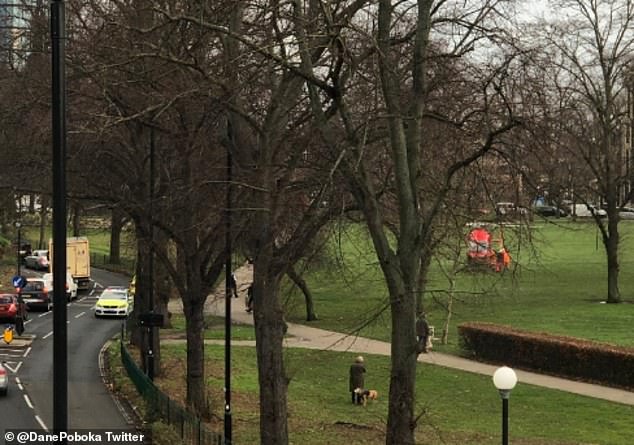