‘That’s a disgrace!’ Man shares a photo of his local fish and chip shop’s hilarious effort at making battered mussels

A man shared a shocking attempt at battered mussels after he bought them from a local fish and chip shop.

The man, from Logan, in Queensland, took to Facebook on Sunday to share pictures of the embarrassing blunder.

The customer said he’d decided to try out an old favourite, battered mussels, from a new fish and chip shop in his area.

The man, from Logan, in Queensland, took to Facebook on Sunday to share pictures of the embarrassing blunder

However after arriving home and opening his dinner he was stunned by what he saw.

Instead of removing the mussels from the shell, the fish and chip shop worker had battered the shell instead, The New Zealand Herald reported.

‘My wife was saying to me last night she should have videoed me opening it up as the look on my face was priceless as this was Māori hunger as I had to consume!,’ he continued.

The hilarious blunder was met with good humour by the man and most of those who saw the post online.

‘This is da (sic) best, made me cry! I will never moan about my kids making my toast!’ one user replied.

However, other social media users were not quite as forgiving.

‘Na ask them what planet they are from? They are in the wrong industry if they think that s*** is ok,’ one user wrote.

The disappointed customer didn’t reveal the name of the offending fish and chip shop but did say he made the purchase Tanah Merah, south of Brisbane. 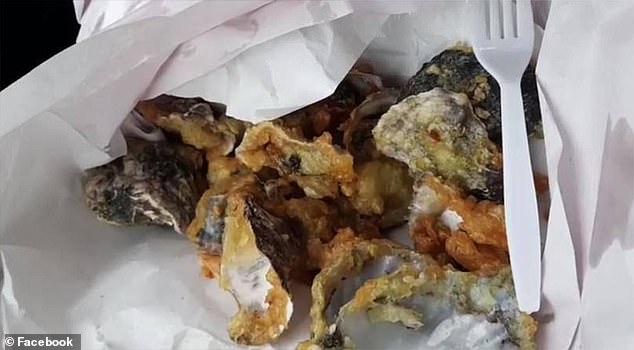