A man who caught COVID-19 at the Crossroads Hotel had one of the highest number of virus particles inside his body that health authorities have seen to date.

There have been 40 coronavirus cases linked to the southwest Sydney pub, since two patrons tested positive after visiting the venue on July 3.

As the state’s infection tally continues to rise, NSW Health Minister Brad Hazzard on Thursday revealed one of the cases has been identified as a super spreader.

‘We’ve got a young bloke from that latest cluster … he had one of the highest infection levels we’ve ever seen,’ Mr Hazzard told Ben Fordham on 2GB.

‘His viral load was quite capable of spreading it to anybody near him … we all need to be on high alert.’

A man who caught coronavirus at Crossroads Hotel, in Sydney’s south west, had ‘one of the highest’ viral loads health authorities have ever seen. A NSW Health workers is seen administering COVID-19 tests to people in their cars at the pub, which has been set up as a testing centre, on July 16

He said the information should serve as a dire warning that residents, in particular young people who account for 40 per cent of cases, should remain on high alert.

‘I’ve been talking to the health tracers, and they tell me young people get out and about in the evening and they go a lot of places,’ he said.

‘They can be super spreaders with great skill and acumen.’

The Victorian resident works for a freight company and was visiting an office in Sydney.

In response, the NSW government tightened restrictions around pubs, halving the number of people allowed to gather in venues from 20 to 10.

Tough new penalties are also being enforced on venues found without a COVID-19 safe plan or those that breach it. 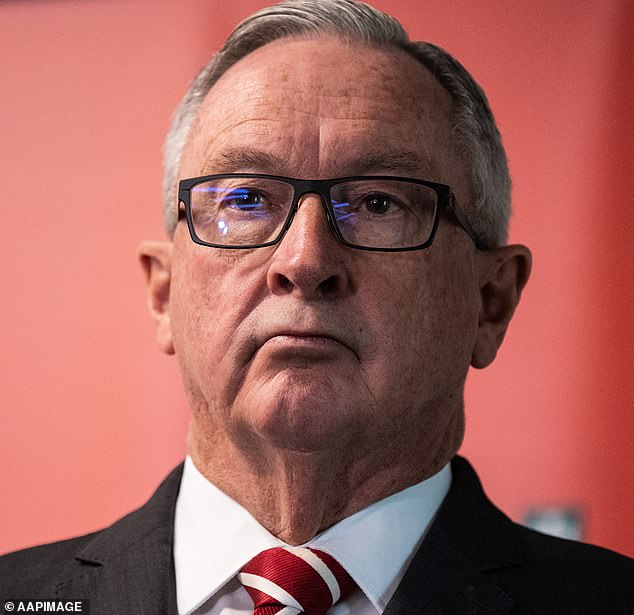 Revealing information about the case on Thursday, NSW Health Minister Brad Hazzard (pictured at a press conference on Tuesday) said young people in particular should remain on high alert as they are proving to be more infectious than older people

Any business found in breach of the public health orders will be held to could face a penalty of up to $55,000. Both measures will come into force from 12.01am Friday July 17.

The source of the three other cases remains a mystery and they are currently under investigation by NSW Health.

Meanwhile, Victoria carved a new record with 317 cases- the worst daily figure seen in Australia since the outbreak began.

As fears grow Victoria’s horror wave could spill across into NSW, Mr Hazzard said his biggest fear is people falling into complacency.

‘This virus is still out and about,’ Mr Hazard said.

‘As I said to someone yesterday, it’s a very speedy virus, it could win a gold medal at the Olympics. Until we can get a vaccine, there’s no way we’re out of the woods.’