Richard Calabro, pictured, has been collecting coffee makers for 15 years and has more than 300 in his collection which he keeps in his shop and at home

There are coffee drinkers, coffee snobs, and then there’s Sydney barista Richard Calabro.

As someone who used to drink 20 a day, the 42-year-old father has come to know a thing or two about the best ways to brew – and since opening his own cafe 15 years ago coffee machines have become his passion.

He has collected more than 300 coffee makers – some which date back to the 1700s – fallen in love over a ‘perfect cup’, twice, and has travelled the world and explored the farms where it is grown.

‘I have an Italian background so I can’t remember my first coffee, it was just part of life we had red wine at the table for dinner and a Latte Café after we had eaten,’ he told Daily Mail Australia.

The Cronulla father says travel, music and coffee are his true passions. But ‘collecting’ has always been part of his life. 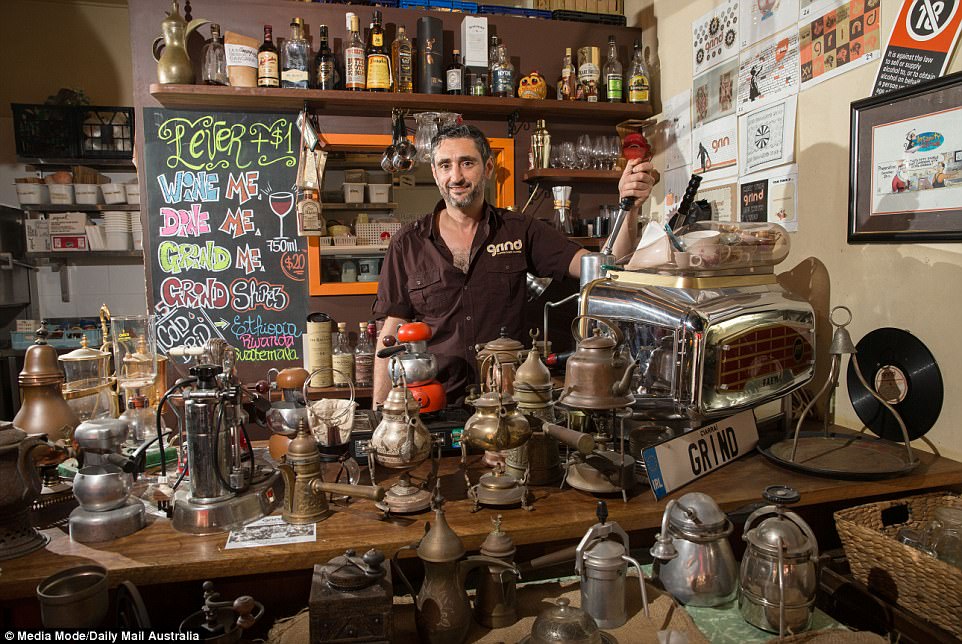 The 42-year-old father from Cronulla says travel, music and coffee are his true passions 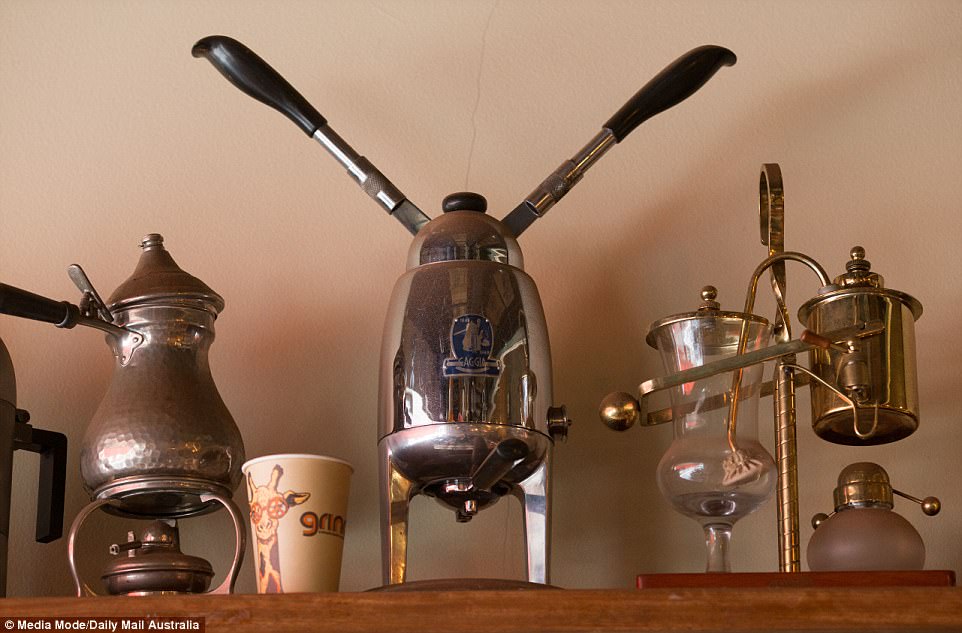 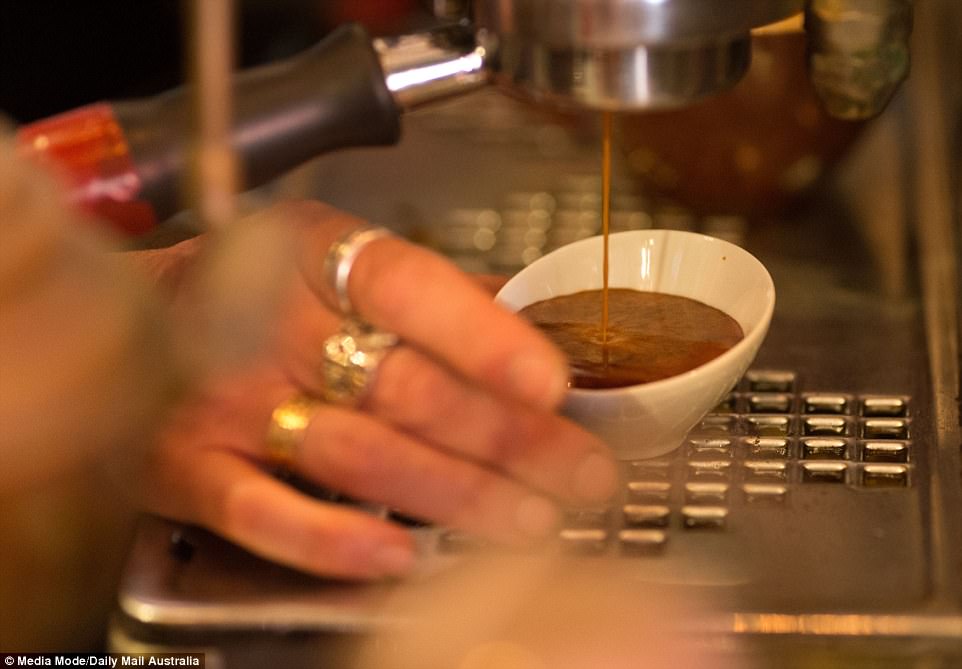 ‘Ever since I was a little kid I would collect thing – from Weet Bix cards to whatever else was next.

‘I must admit I have slowed down with the coffee machines – I will no longer buy seconds or thirds because I just don’t need them.’ The vast collection which includes machines designed for home as well as commercial pieces is ‘spread out’ across the shire.

‘There are some here in the shop and at the other shop and too many sitting in the attic and garage gathering dust.

‘In an ideal world I would have some kind of museum where I could show them off behind glass,’ he said. But, surprisingly, it isn’t the taste of coffee that he loves.

‘It brings people together,’ he said. 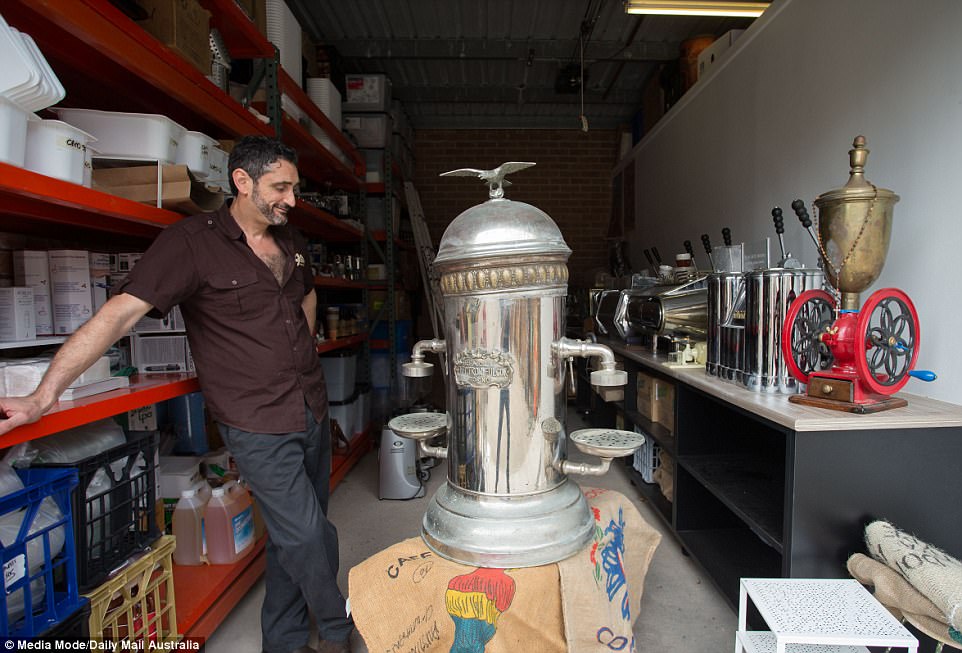 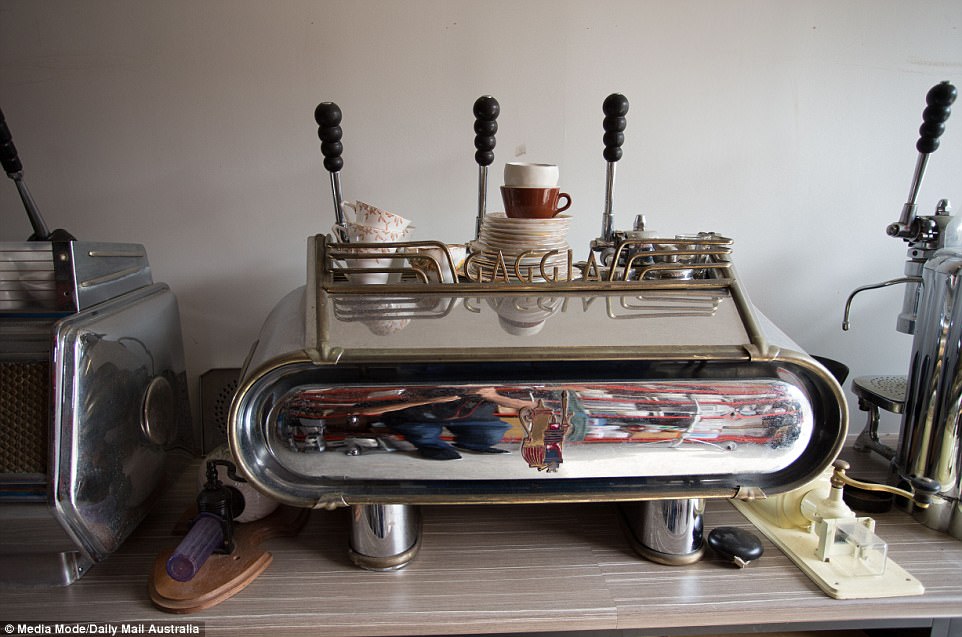 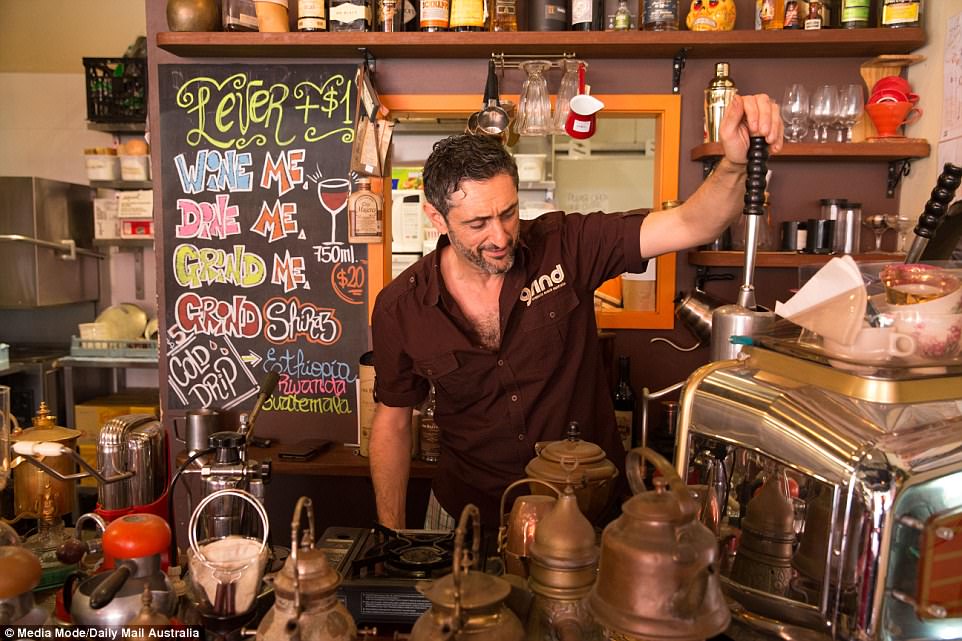 ‘I love the traditional idea of a coffee house where people would meet and talk.’ His favourite machines come from around the 1950s.

His 1959 Faema machine is in perfect working order and is put to work on the weekends.

‘If you know how to use them they make better coffee,’ he said.

And he knows the shortfalls of other machines.

‘Some of my favourite machines don’t make good coffee – some of them make terrible coffee – but I like the way they look.’ 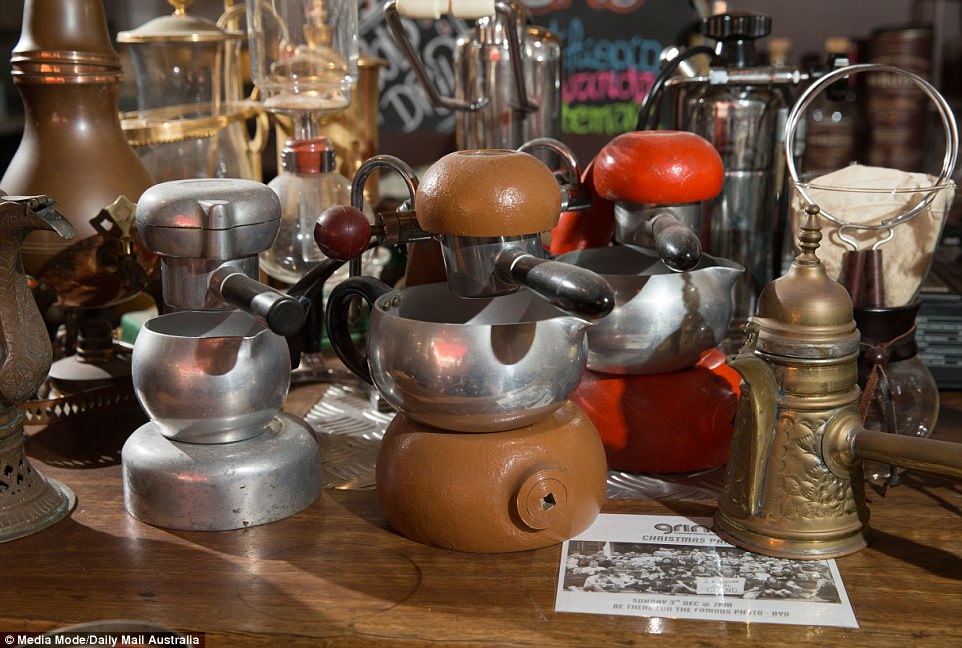 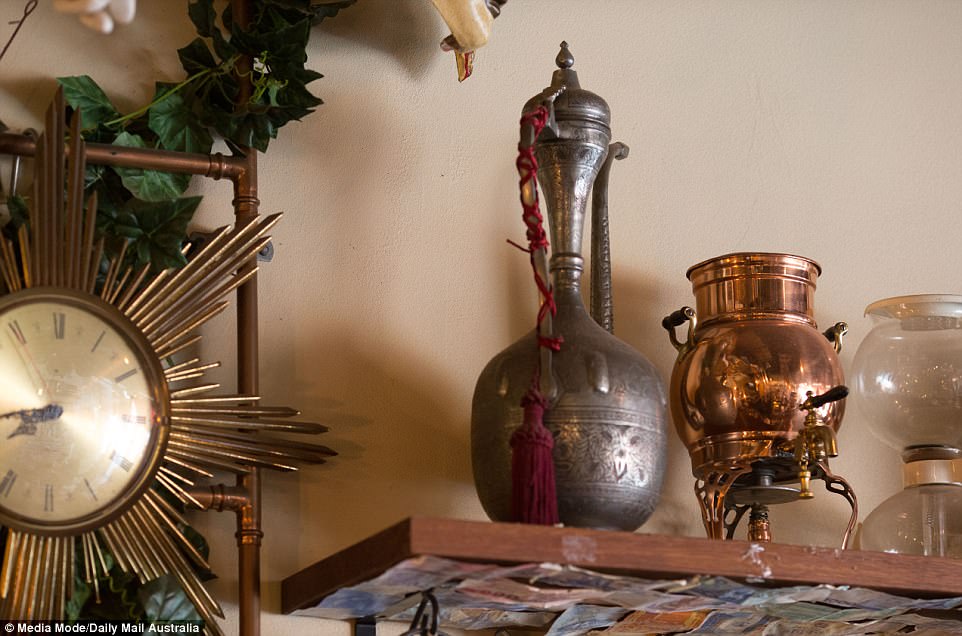 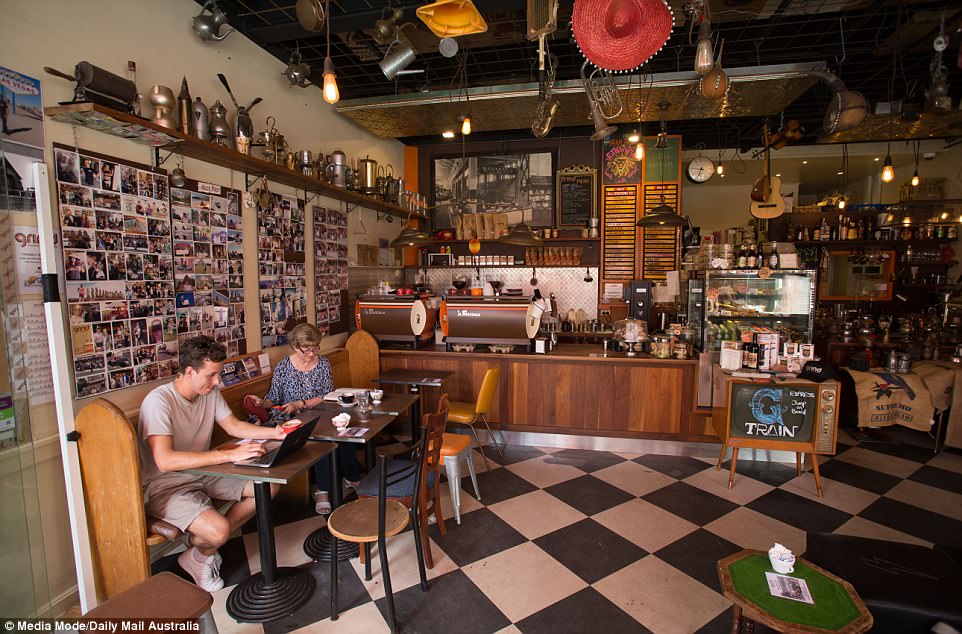 The barista has spent a lot of time exploring coffee plantations overseas, tasting coffee in other countries and watching different methods in preparing the perfect brew – but he still think Australia has the best coffee in the world.

‘I have travelled a lot and Australia is hands down the best in the world.’

Because of his preference of vintage machines he finds he has to go further afield than the local antique shops to find new pieces.

‘People didn’t have a lot of these machines at home because in the 50s Australia was a tea drinking nation,’ he said.

Mr Calabro has travelled to Romania, Syria, Hungary, Morocco and Panama – among other unique destinations just in the pursuit of new machines. 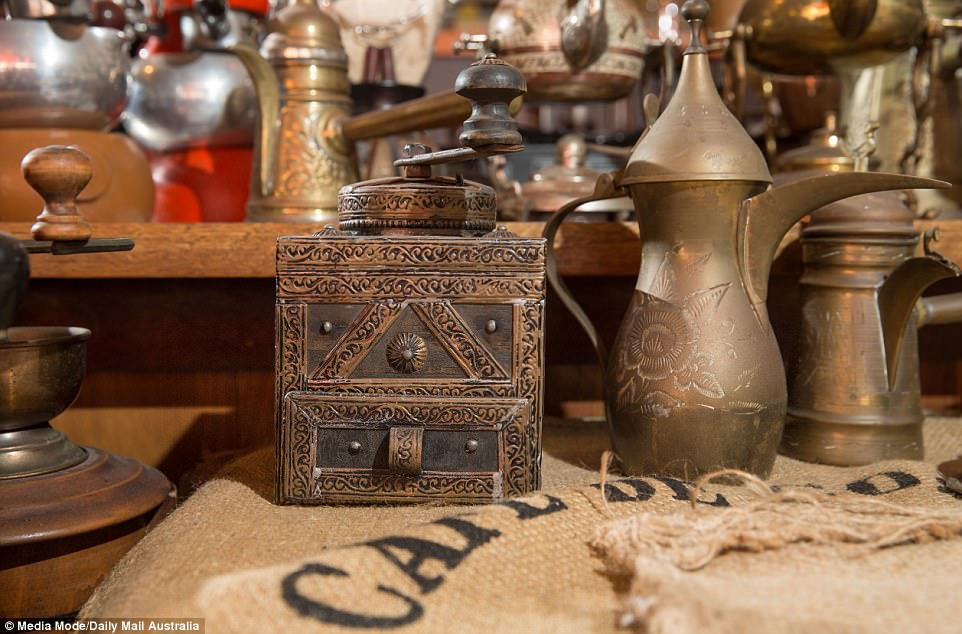 ‘People didn’t have a lot of these machines at home because on the 50s Australia was a tea drinking nation,’ he said 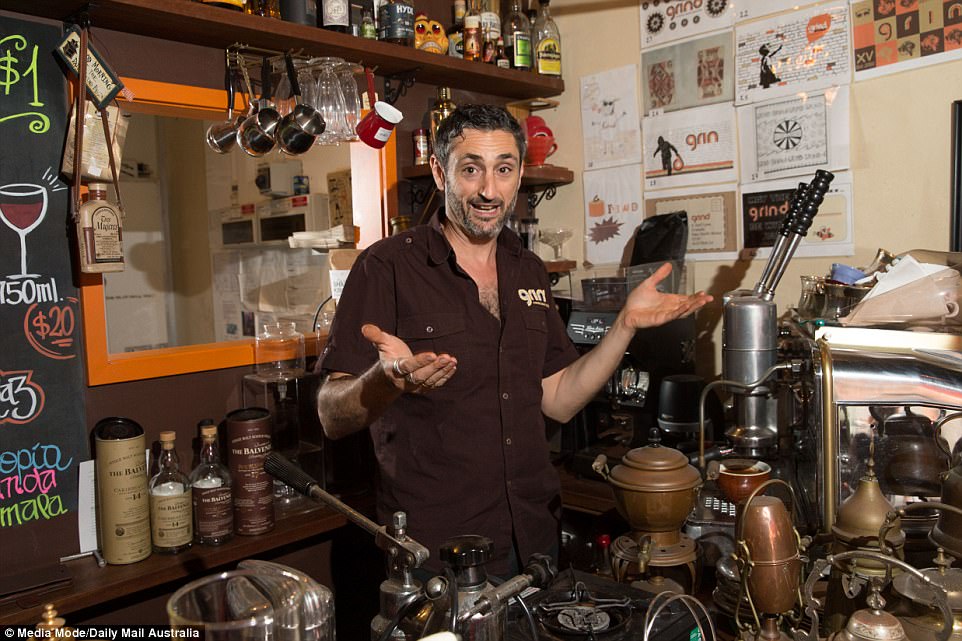 ‘I have travelled a lot and Australia is hands down the best in the world,’ he said 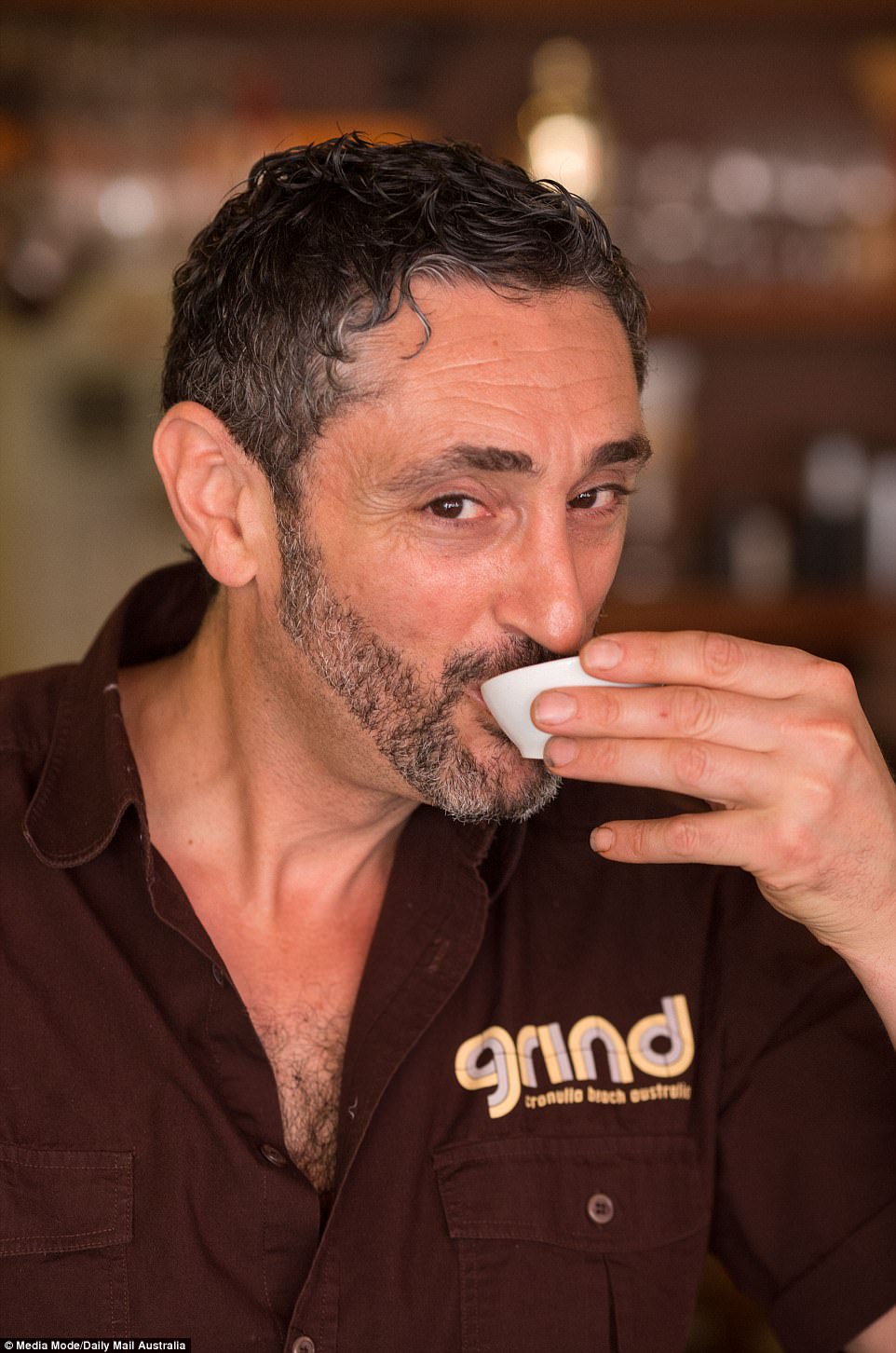 Mr Calabro has travelled to Romania, Syria, Hungary, Morocco and Panama – among other unique destinations just in the pursuit of new machines

‘One day when we were in Romania we went to a antique shop – I remember there was stuff everywhere and we found a little machine,’ he said.

‘But, you know, we thought it was a bit overpriced and walked out – but I wanted it so we went back in the morning.

‘We were supposed to leave that day but the place was closed and I didn’t want to leave without it – so we stayed an extra day – that is probably one of the most extreme lengths I have gone to for a machine.’ 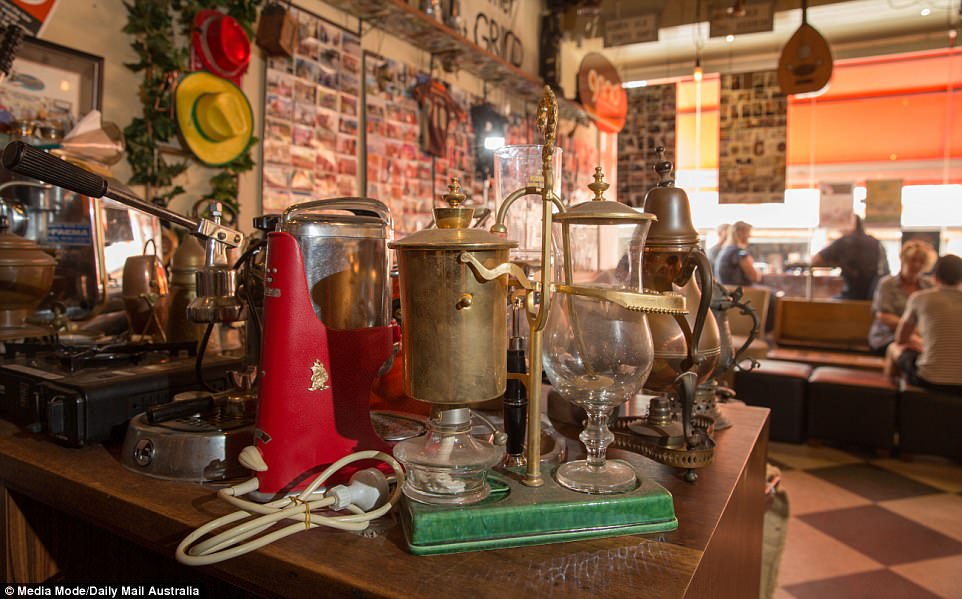 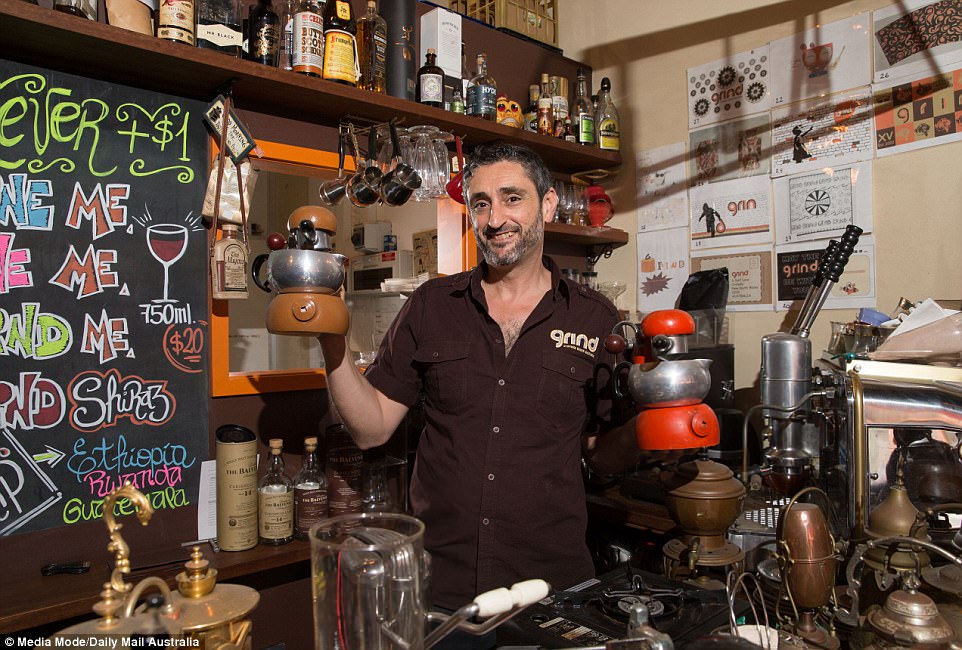 ‘One day I was in Spain and they thought the coffee grinder in my bag was a bomb and pulled me aside,’ he said 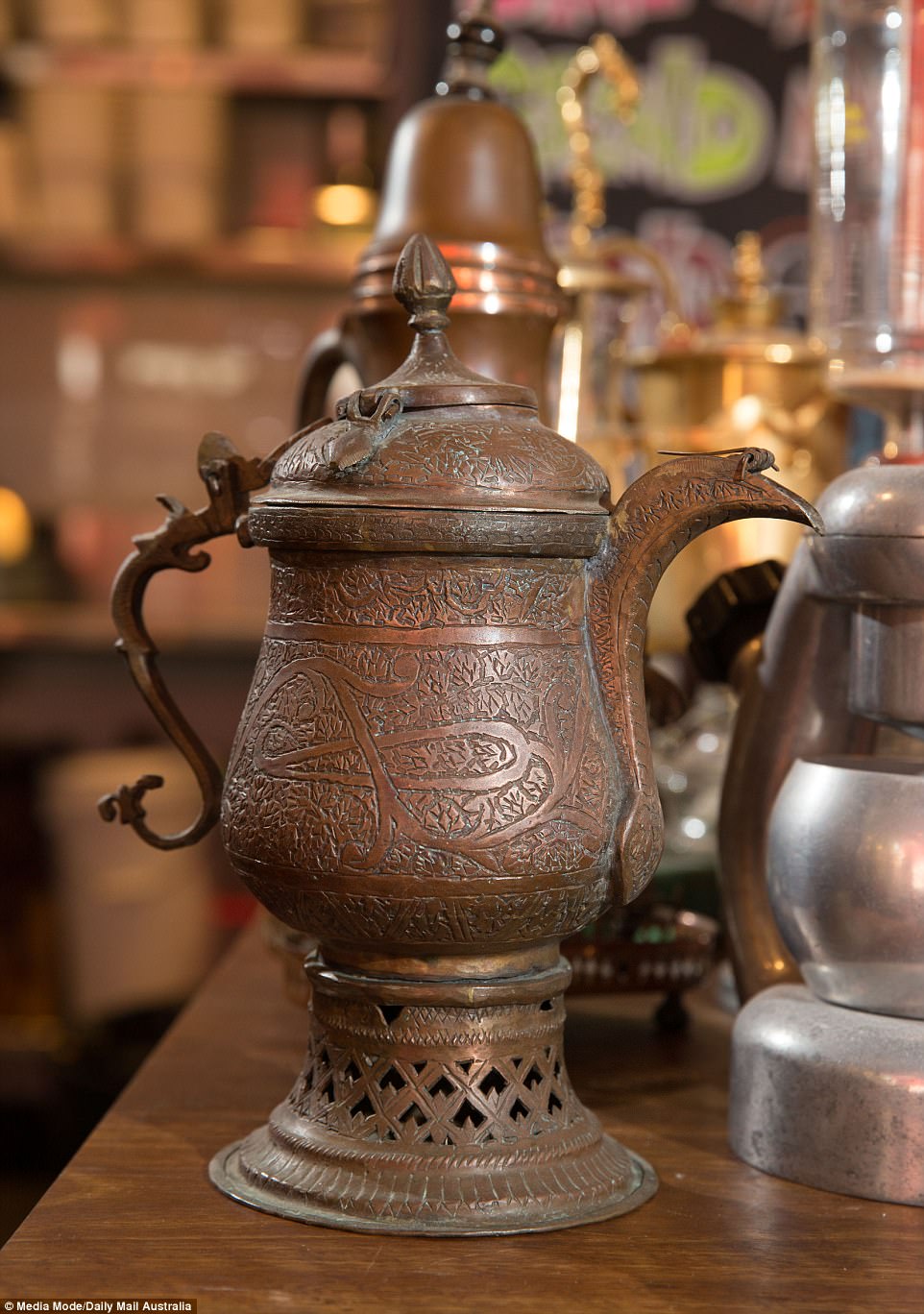 There is also a danger to purchasing machines overseas.

‘One day I was in Spain and they thought the coffee grinder in my bag was a bomb and pulled me aside,’ he said. ‘Another time in Costa Rica the drug dog stopped and sit next to me.

‘I knew it was serious when they took away my phone and wallet.

‘They came back to tell me there was a trace of cocaine on the money in my wallet – they finally let me go.’ 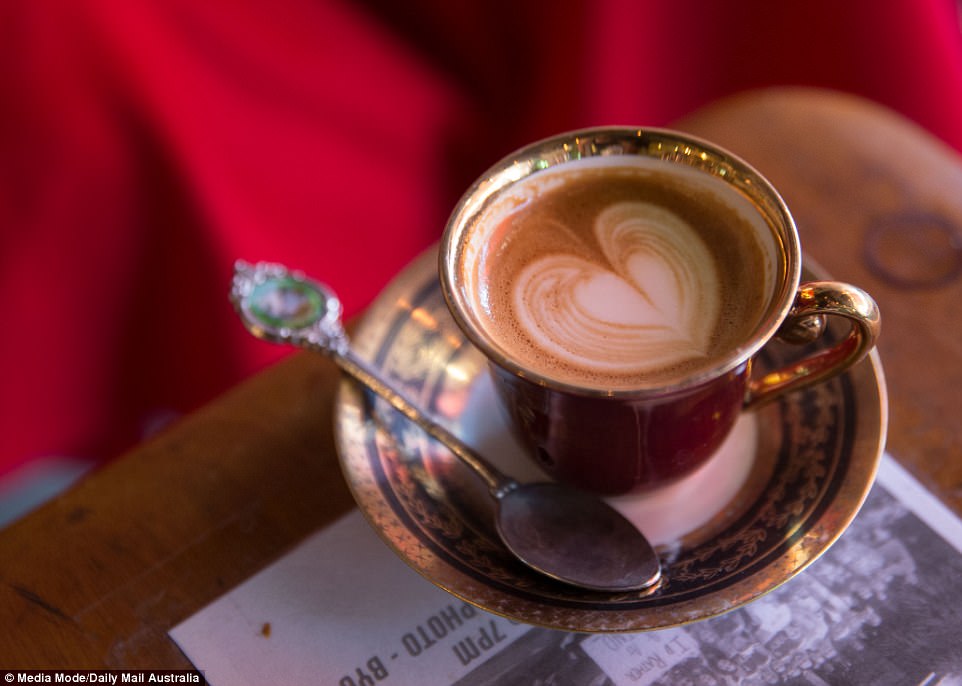 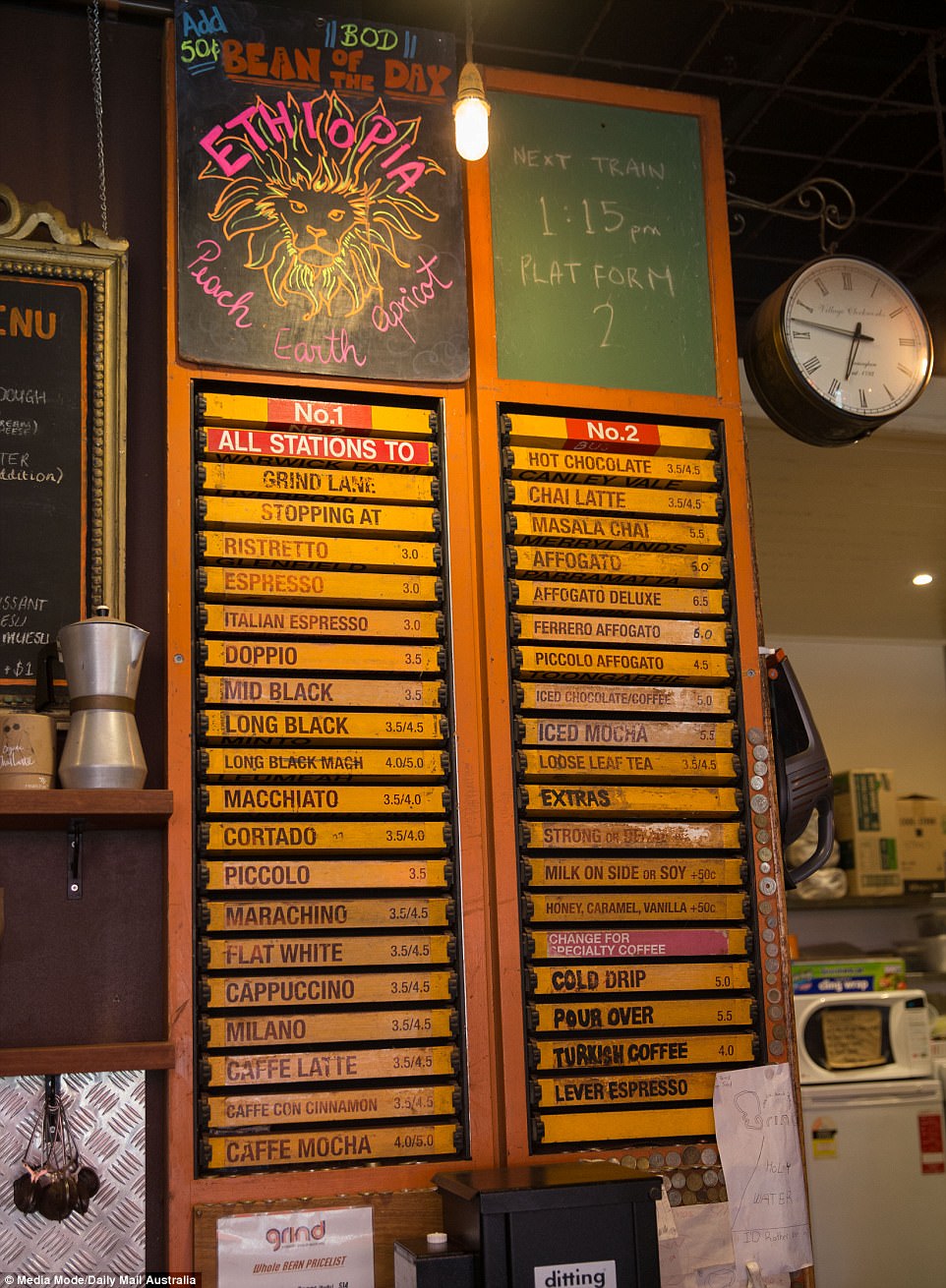 An avid collector Mr Calabro is always looking for the newest member of what he calls ‘the extended family’ of coffee apparatus in his hoard.

‘I am going to Adelaide next week to pick up a 1952 espresso machine,’ he said. He is hoping it might replace his 1959 model in the shops.

‘Not all of them work – I have to find seconds of some things to get some of them going because you just can’t get any of this stuff anymore,’ he said.

At the moment the avid coffee fan has two favourite coffees – one sells for between $60 and $80 a kilogram – the other sells for up to $500 a kilogram.’

‘I like the Honduras Cup of Excellence –it has been my favourite for about 18 months but I also really like the Panama Geisha,’ he said. 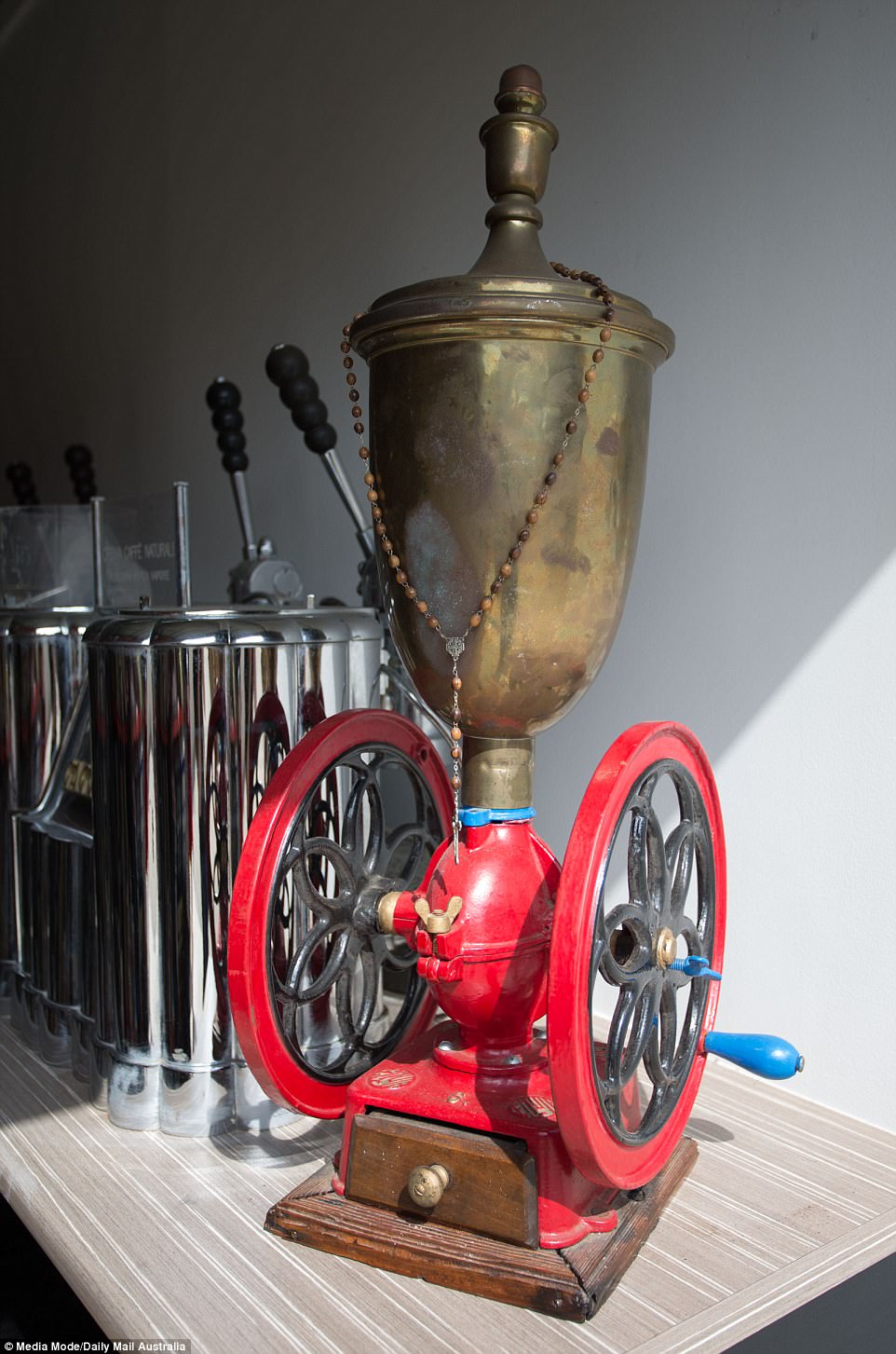 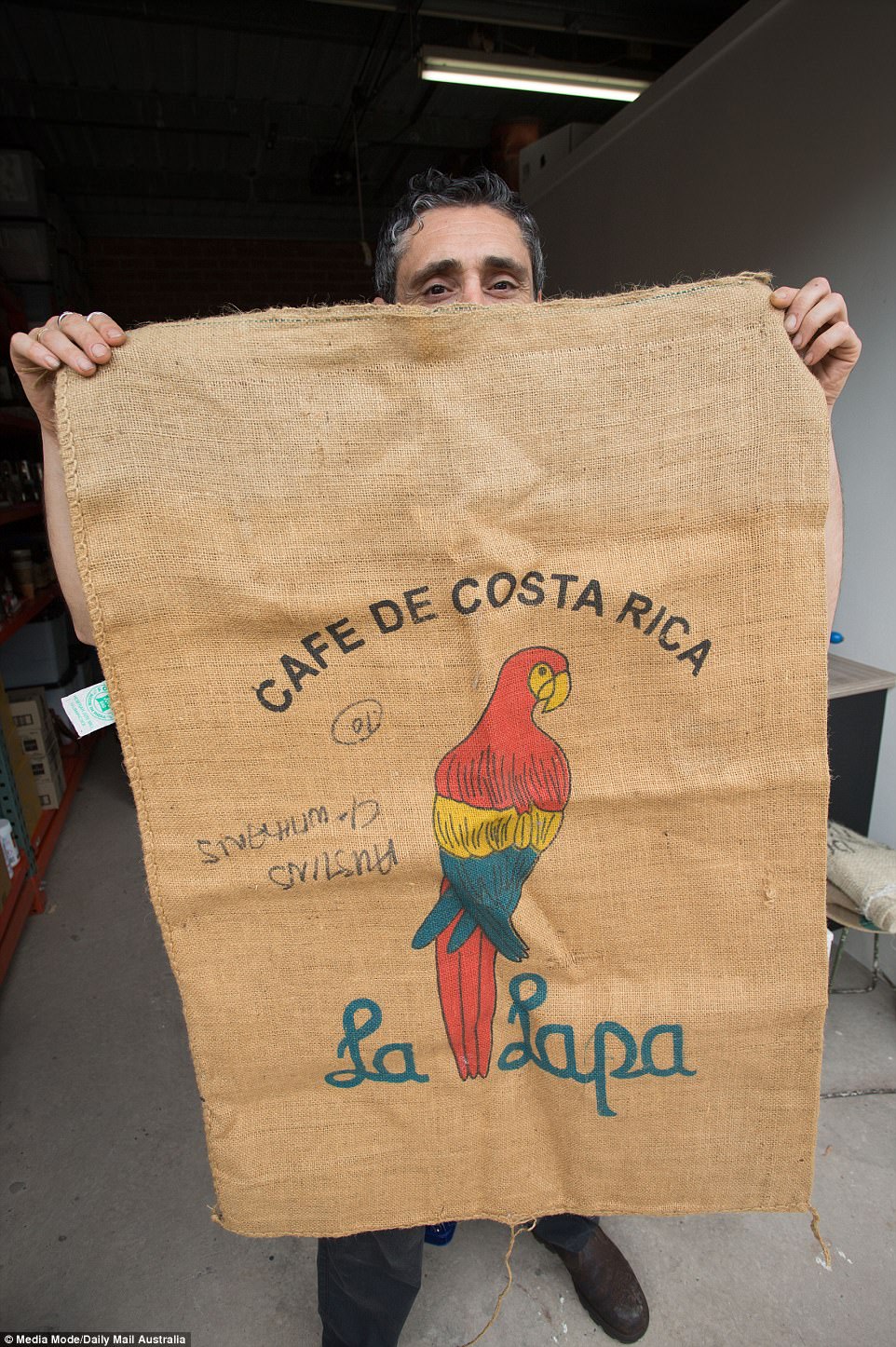