Labour MP Margaret Hodge doubled down on her claim that Jeremy Corbyn is a ‘racist anti-Semite’ today.

The veteran former minister, who lost family members in the Holocaust, said she ‘stands by’ her barb amid a furious row over the party’s new code of conduct.

Dame Margaret said the rules – which stop short of accepting the international definition of anti-Semitism – were a ‘bridge too far’.

She also gave a harrowing account of the vile abuse she has faced since confronting Mr Corbyn at a meeting last week – including being called a ‘Zionist b****’.

A Labour spokeswoman insisted Mr Corbyn is a ‘militant opponent of anti-Semitism’.

Speaking at the Tolpuddle Martyrs Festival in Dorset this afternoon (pictured), Jeremy Corbyn urged MPs to delay a showdown over Labour anti-Semitism rules

Labour’s proposed new code does not feature all the examples in the International Holocaust Remembrance Alliance (IHRA) definition – sparking claims that activists will not be punished for common slurs such as comparing Israeli actions to those of the Nazis.

MPs and peers are due to press an emergency motion on the issue at a gathering tonight before Parliament breaks for the summer. Allies of Mr Corbyn admitted yesterday that Labour has been in a ‘very dark place’ over its response to the problems.

Speaking ahead of the showdown, Dame Margaret told BBC Radio 4’s Today programme: ‘I have always in the past disagreed with the people who have called him an anti-Semite but, at the end of the day, people have to be judged on what they do and not what they say.

‘They have to be judged on their actions and not their words.

Dame Margaret said she had received a wave of anti-Semitic abuse since her confrontation with Jeremy Corbyn.

‘Since the incident in the House of Commons last week I have clearly had a spate of anti-Semitic emails and social media messages – although I have to say I think I have had more supportive messages than negative ones,’ she told Today.

She said she had been called a ‘Zionist b****’ and told she was ‘under the orders of my paymasters in Israel’. Another comment suggested she should be dressed as a Palestinian so Israeli forces shot her.

‘Think how long it has taken for the Labour Party to respond at all to any of the allegations of anti-Semitism.’ 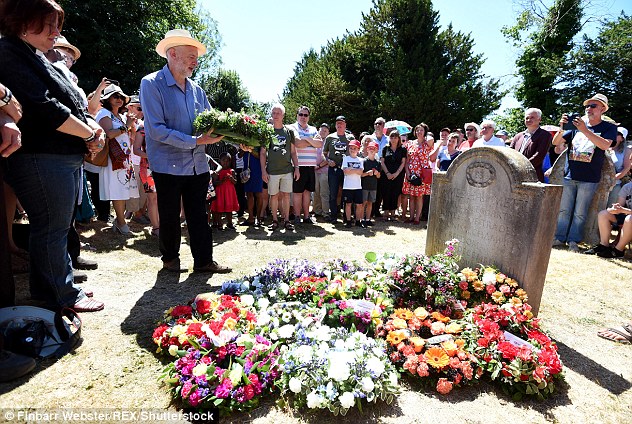 Insisting she would not leave the party, she said: ‘I am going to fight within the Labour Party and it is terrible that in 2018 I have to do that.’

Asked about the controversy as he attended the Tolpuddle Martyrs Festival in Dorset yesterday, Mr Corbyn urged MPs to delay the motion until the autumn – bizarrely suggesting not enough people will turn up to stage a proper debate.

‘I’d rather they delayed that discussion until September because there will be a full attendance at meetings in September,’ the Labour leader said.

Mr Corbyn also revealed he had not spoken to Dame Margaret since she confronted him over the issue.

In a clear jibe at Dame Margaret today, Mr Corbyn said he was ‘always very calm’ and ‘treated people with respect’.

‘I felt not pleased about it, I felt upset about it but as always I am very calm and treat people with a great deal of respect,’ he said.

‘I don’t shout at people, I just listen to what they have to say.’

He added: ‘A complaint has been registered and that will have to be dealt with by the party, but that is independent of me.’