TM on the other hand involves thinking of a mantra or sound that settles the mind, which may allow veterans to gradually release painful memories.

Researchers from the US Department of Veterans Affairs, Washington DC, randomly assigned 203 ex-soldiers to receive either TM, PE or PTSD health education, with the latter acting as the control group.

All of the participants underwent 12 90-minute sessions of their allocated therapy over as many weeks, as well as being told to practice every day at home.

Results showed 61 per cent of those receiving TM had at least a 10-point improvement to their PTSD severity score after three months.

Severity was measured according to a standard score that takes into account the degree of flashbacks, nightmares and insomnia.

The study was published in the journal Lancet Psychiatry.

PTSD is difficult to treat, and affects between 10 and 20 per cent of military veterans.

In 2013, around 400,000 ex-soldiers in the US were known to be living with PTSD, according to the Veteran Affairs health system.

PE is recommended by the Department of Veterans Affairs, however, many PTSD sufferers refuse to try it or drop out, according to lead author and Veterans Affairs psychologist Thomas Rutledge. 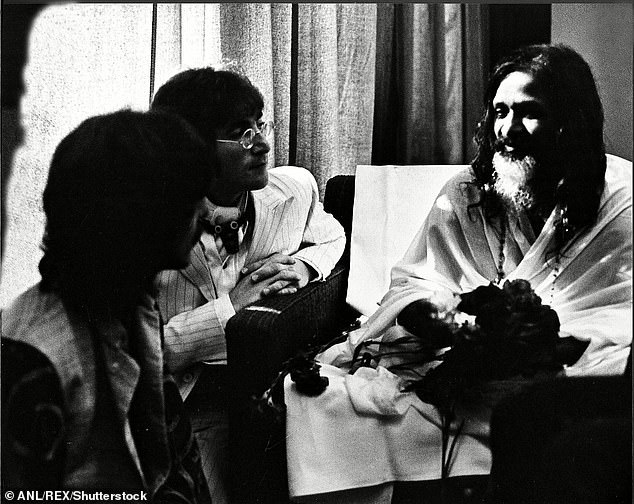 Transcendental meditation was developed by Maharishi Mahesh Yogi (right). He was a guru to the Beatles, and is pictured with John Lennon And George Harrison after a public lecture in 1967 in London. He went on to found a university that the study’s authors were affiliated to

Mr Rutledge believes evidence of TM’s effectiveness ‘allows us to put more options on the table’.

He also thinks TM may be more appealing to veterans who might associate mental-health treatment with weakness.

‘It’s probably less threatening. It may be easier to talk to veterans about participating in something like meditation,’ Mr Rutledge said.

TM was developed by Maharishi Mahesh Yogi – a guru to the Beatles in the late 1960s. Some of the study’s authors were affiliated to a university in Fairfield, Iowa, which was founded by Mr Yogi.

The Department of Veterans Affairs already uses meditation and yoga to supplement traditional PE, according to Paula Schnurr, executive director of its National Center for PTSD.

She also notes just one therapist led 80 per cent of the PE. This therapy’s effectiveness in the study may therefore have come down to the competence of this particular specialist.

In addition, most of the study’s participants were men who had suffered combat-related trauma. It is therefore unclear if women or those with other types of PTSD would benefit from TM.

Meditation is growing in popularity worldwide. A 2017 US Government survey found 14 per cent of adults had recently meditated, up from four per cent five years earlier.

But research released earlier this year suggested meditation may worsen a person’s ego.

People have a higher opinion of themselves after practicing the ancient form of exercise and mindfulness, according to a study by the University of Southampton.