Megyn Kelly has spent the past four months popping by the set ‘Today’ as she worked on turning herself from a steely cable news host into a warm and relatatble morning show presence ahead of the premiere of her new NBC show.

And after all that hard work, Megyn got one final chance on Friday to prove to viewers just how similar she is to the rest of America, and she did not waste a moment.

In the span of just two minutes, Megyn kicked things of by managing to command the final moments of the Today’s Take finale where she joked about making an early morning martini, played with a pet pony,  planted a giant kiss on the cheek of Dylan Dreyer and talked about how hard it is for her to wake up in the morning.

She was eventually played out while trying to tell a story about Al Roker, but no sooner did the credits role on the third hour of the morning show then Megyn was back on-air again as she filled in for Kathie Lee Gifford alongside Hoda Kotb on the show’s fourth hour.

Relategate: Megyn Kelly made a final push before the premiere of her new NBC morning show on Monday (above on Today with Hoda Kotb Friday) 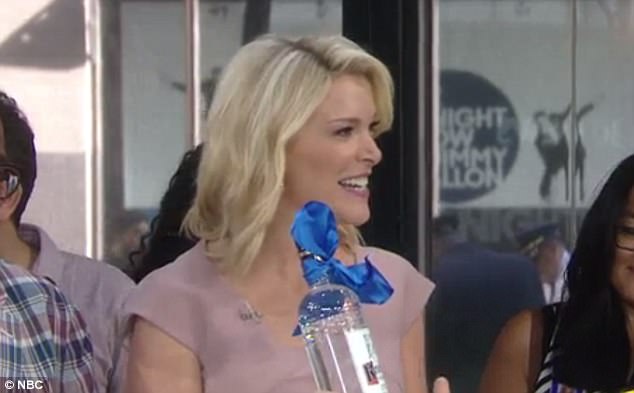 You say potato…: Megyn was gifted some vodka (above) and later enjoyed a Ketel One and soda while appearing alongside Kotb

Megyn once again made the best of her time in that appearance, hitting on topics like what a slob she is, how much she loves sweatpants, her inability to plan out good outfits and the fat that her handsome husband Douglas Brunt does not even own a brush.

Hoda also helped to engage Megyn in some casual back-and-forth conversation at the top of the show, asking her if she had picked out an outfit for her premiere episode on Monday.

‘I looked through a couple of outfits. I don’t know if I should do a skirt or pants. I’m working it out. Maybe a pastel,’ said Megyn.

She then launched into a bit about her unique style of dress growing up while attending for the first day of school.

‘I would grab something that didn’t match. It would usually be in a cowboy theme,’ explained Megyn.

‘ Like a cowboy or a cow girl outfit with the guns on the side with the caps. My mother let me wear whatever I wanted.’

She then added: Nine times out of 10 I would hear my mom say I know a little girl who didn’t brush her hair today.’

Megyn does now style her hair, unlike her husband, but said she still prefers a more relaxed look.

‘I’m not one of the people who is always worried about making myself – I have sweat pants on,’ said Megyn, who went on to say that she tells he rhusband he can watch her on TV if he wants to see her ‘A game.’

Hoda than chimed in to say: ‘He’s hunky.’ 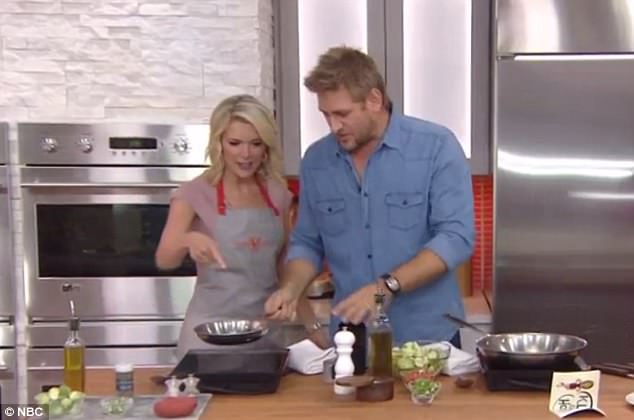 Secret garden: Her cooking segment ran into a bit of a snag when she revealed she did not know what a shallot is, asking Curtis Stone (above) to describe the root vegetable 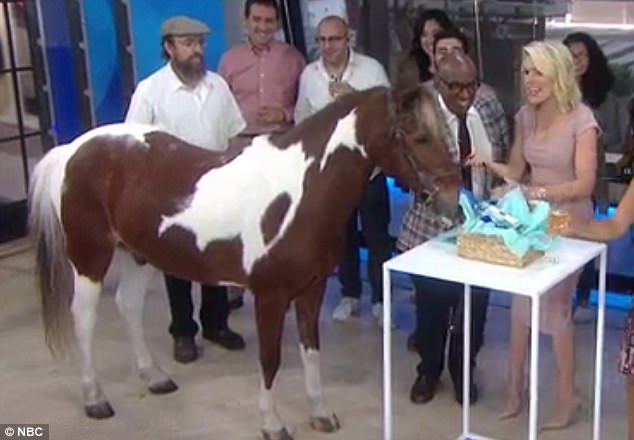 Ginuwine affection: Al Roker brought out a pony as he passed over the reins to the third hour of Today

Megyn responded by saying: ‘The thing about Doug is he’s the most modest sweet guy. He’s so good-looking.’

That is when she added: ‘He doesn’t own a brush.’

Hoda also had a Ketel One and soda waiting for Megyn, just a few minuutes after she was gifted a bottle of the booze by Roker and the departing Today’s Take hosts.

‘Food is too important to me. I never miss a meal. I always have two snacks a day.’

Megyn proved that to be true later in the program as the women prepared a filet with Curtis Stone.

That got off to a bit of a rocky start however when Megyn revealed that she did not know what a shallot was while preparing the sauce with Stone.

‘It’s like a baby onion. A little sweeter,’he explained. 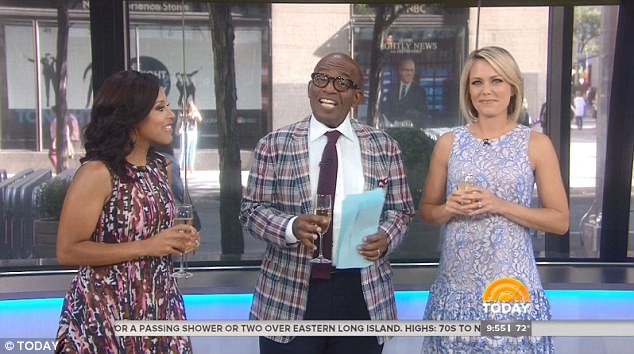 Fond farewell to some friends: It was an emotional day for Roker, Sheinelle Jones and Dylan Dreyer (above) who said goodbye to Today’s Take 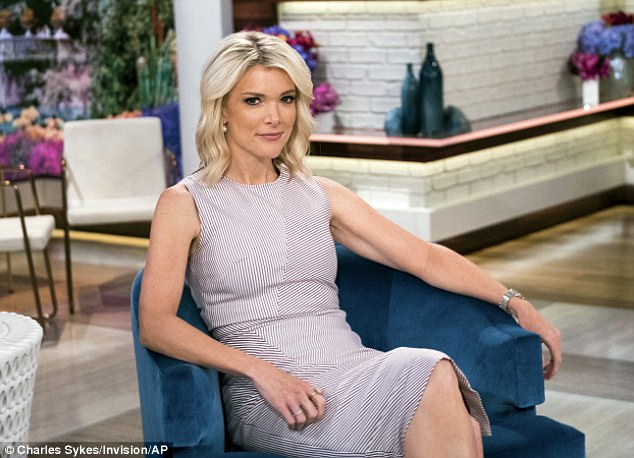 Moving in: Megyn will kick things off on Monday with the cast of ‘Will & Grace’

Megyn already managed to run into some difficulties in her first big ‘Today’ interview after her sit down wih the Kardashian women was one lady short.

The NBC host was joined by matriarch Kris and her daughters Kourtney, Kim, Khloe and Kendall, but noticeably absent was her youngest child Kylie.

That came as a bit of a surprise, especially since Kylie was photographed at the studio with her sisters on the day the taping took place earlier this year and even posted video of herself on set to Snapchat.

And during the interview, Kendall was even more fiercely protective than normal of Kylie.

At one point, the 21-year-old model snipped at Megyn while pointing out how successful her kid sister has become thanks to her Kylie Cosmetics empire.

Kendall could also be heard talking over Megyn at one point while she was speaking with Kris, with the model saying the word ‘trash’ as she and her sister Kim laughed at something that had happened in the interview.