An iconic Melbourne cafe co-owned by a man who was brutally killed by a barbaric terrorist has reopened for the first time since his death.

Pelligrini’s reopened on Tuesday at 8am in a limited capacity but heartbroken staff left Mr Malaspina’s famous seat the bar empty.

The Melbourne espresso bar co-owned by beloved coffee maestro Sisto Malaspina (pictured) will reopen on Tuesday, the first time since his death 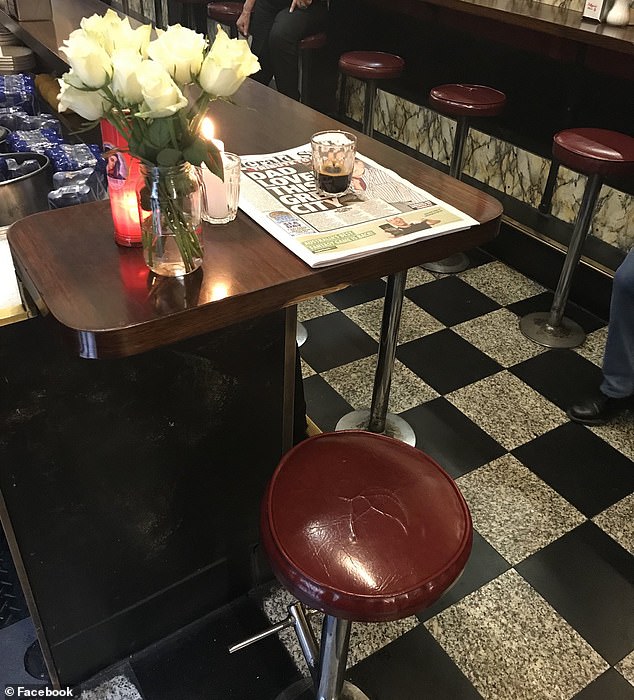 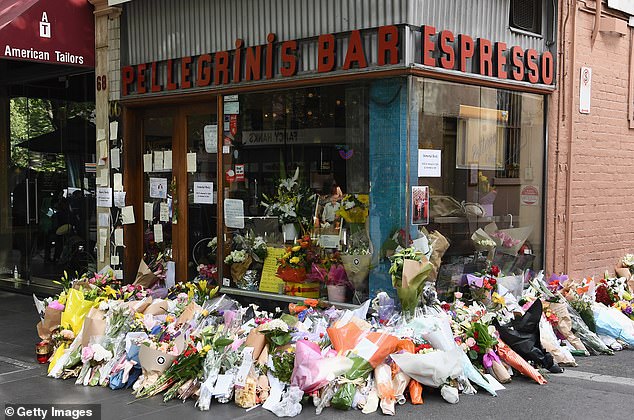 When the cafe reopened, customers were being offered free long blacks.

‘We will be serving long blacks for free. It was Sisto’s favourite and will be in memory of him,’ co-owner Nino Pangrazio said.

The family of Mr Malaspina will reportedly not attend the reopening but on Monday evening they issued a statement thanking the community for their support.

‘To the people of Melbourne, your heartfelt tributes have shown us why our Dad loved this great city so much,’ the statement said.

‘Dad was a larger than life character and his natural generosity made every individual he met feel welcome and important.

‘Each customer of Dad’s was given the same respect and service regardless of their standing in society. To him everyone was special. His love and passion for his customers remained the same for over 40 years. To him it was a joy to go to work every day. 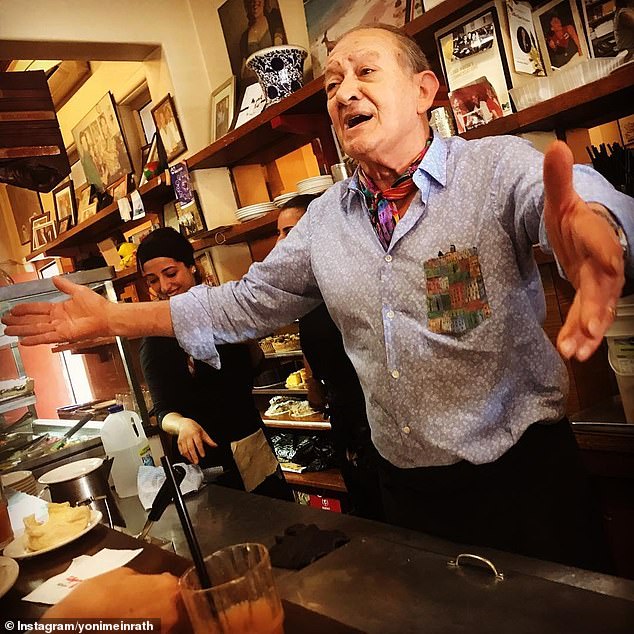 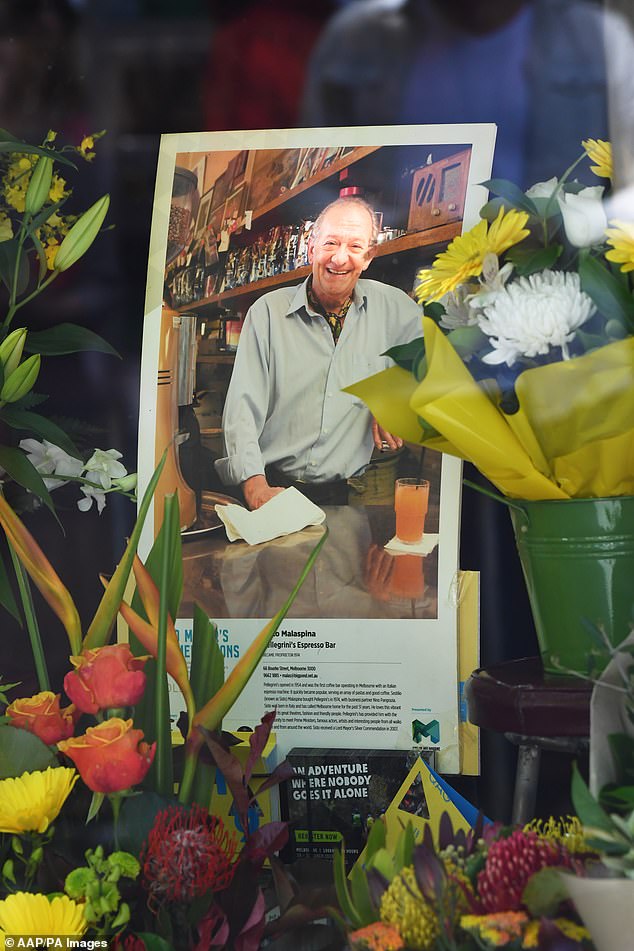 ‘His love and passion for his customers remained the same for over 40 years. To him it was a joy to go to work every day,’ a family statement from Mr Mr Malaspina said

‘He was a distinctly recognisable figure in his colourful choice of clothing and his flamboyant personality. To us he was just a beautiful man, a loving husband and a doting father.

‘In honour of Dad’s memory the wonderful staff at Pellegrinis are determined to continue his legacy with the same passion.’

There are expected to be many important guests at the state funeral, possibly including Prime Minister Scott Morrison who has indicated a desire to pay his respects.

Mr Malaspina was killed and two other men were injured when 30-year-old terrorist Hassan Khalif Shire Ali drove a ute into Melbourne and launched a knife attack.

Ali crashed his ute in Bourke Street at about 4:10pm on Friday, setting it on fire with ‘barbecue-style gas bottles’ opened and primed to explode inside.

He then stabbed Malaspina, who rushed outside to help him out of the burning car.

The restaurateur died in the street while police shot Ali, who died later in hospital. 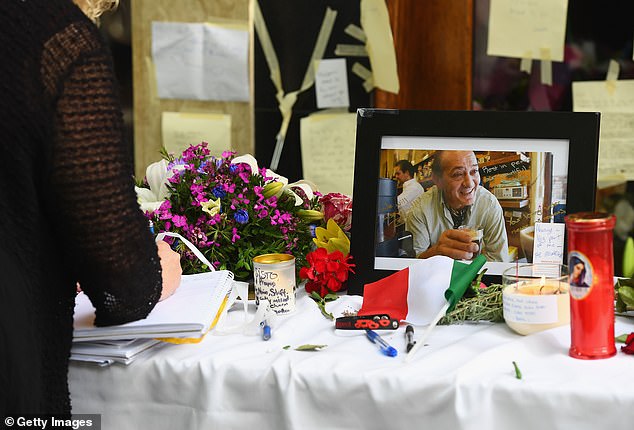 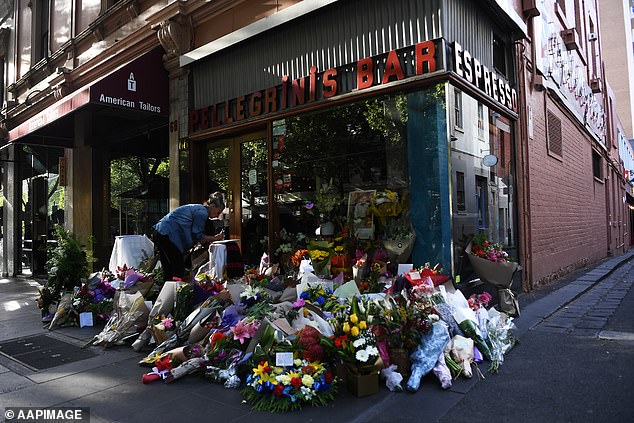 Mr Malaspina had co-owned Pellegrini’s, on Bourke Street, since 1974 and both man and venue had become icons in Melbourne.

A state funeral will be held for Mr Malaspina next week.

Premier Daniel Andrews had spoken with Mr Malaspina’s family over the past two days and was pleased they had taken up his offer of a state funeral.

‘The governor will speak at that state funeral on behalf of all Victorians. There will be many others that will pay tribute to such a beautiful man. And I’m sure that the crowds will be enormous – a great show of strength that we won’t be cowered by this evil,’ Mr Andrews told the Nine Network on Tuesday.

‘So many Melburnians knew him and even if you had not spent a lot of time with him, you had a sense you knew him because he is the father of our cafe culture. He is the father of that kind of generosity of spirit right throughout our hospitality industry that we value and cherish so much.’