Men really are better at navigating than women claims scientists

It has been the subject of countless arguments between couples, but scientists have finally proven that men are ‘significantly’ more efficient at navigating than women.

According to new research, men are more likely to reach their destination faster than their female counterparts.

This is typically because men are more likely to use a shortcut to get to their destination, while women prefer to stick with a tried-and-tested route.

Men are more efficient when it comes to navigation, typically reaching their destination faster than women, new research from the University of California, Santa Barbara has revealed (stock Image)

Researchers from University of California, Santa Barbara conducted a series of experiments to try to determine the difference in how the sexes navigate.

Male and female participants were asked to find their way around a computer-generated maze using a keyboard and mouse.

At the start of the experiment, each participant was shown a simple – albeit long-winded – route around the maze that passed a number of recognisable landmarks.

Men overwhelming chose the latter and on average reached the destination faster.

Although many women were just as efficient as the best male performers, there was a greater percentage who took the slower learned route, which reduced the average. 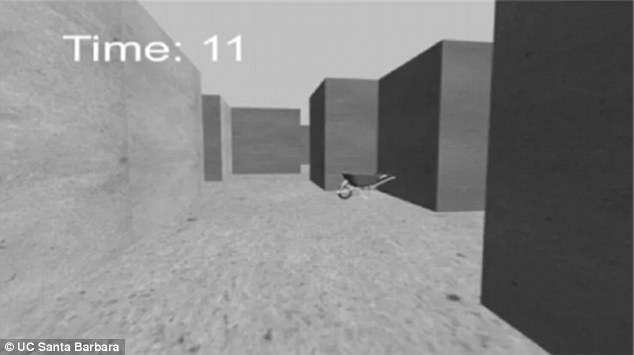 Participants were told to familiarise themselves with the maze, which included a series of landmarks, like the wheelbarrow (above), to help them navigate to their destination

In a second version of the test, researchers asked a fresh batch of participants to navigate around the computer-generated maze, but did not always include the digital landmarks inside the maze.

This was designed to test how the different genders used these landmarks to position themselves.

Lead author of the study, Alexander Boone of UC Santa Barbara said: ‘As predicted from previous research, these experiments showed that men were more likely to take shortcuts and on average reached their goal location faster than women.

‘In contrast, female participants were more likely to follow learned routes and wander.

‘In both experiments, men were significantly more efficient than women, even after controlling for the effects of strategy.’

Since the maze and the landmarks were simulated in a computer program, researchers also asked whether participants played video games. 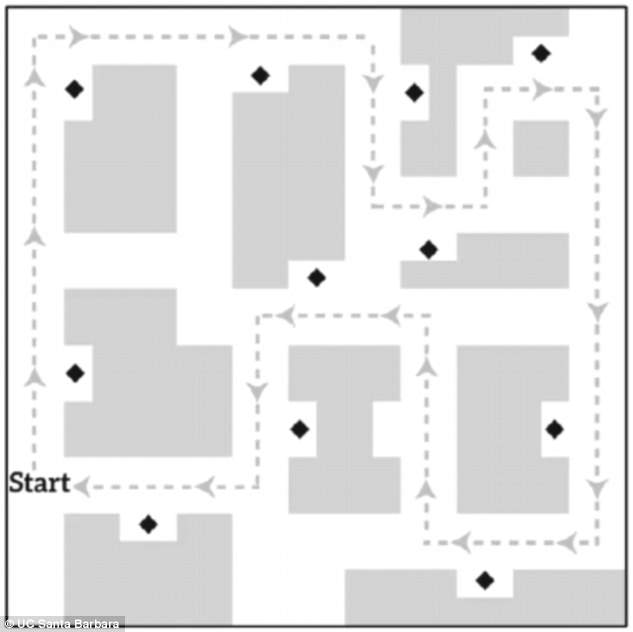 Both male and female participants were initially shown around the maze using the same route, which passed each landmark. The majority of men ditched this route when it came to navigating independently around the maze, while more women stuck with the tested route

Researchers admit this could have played a role in the results.

‘It is also possible that the sex difference in efficiency is due in part to facility with the interface or navigation in virtual environments, as men tend to spend more time playing video games,’ speculates Boone.

According to Boone, it will be important in future research to examine whether the same results can be achieved when people navigate in real-world environments, rather than virtual ones.

DO MEN GOSSIP AS MUCH AS WOMEN?

A shocking recent study revealed that men gossip as much as women.

And far from behaving like gentlemen, they are more likely than their female counterparts to b**ch about workmates.

Researchers quizzed more than 2,200 people about their gossiping habits and found that males and females are equally likely to share tittle-tattle in the office.

But while women tend to talk supportively about colleagues, men try to run rivals down.

The researchers suggested that gossip gave women a way to compete in a non-physically threatening manner, while for men it helped build their self-confidence.

The study, published in March and carried out by Ariel University in Israel, asked participants to imagine describing a person they had just met to a friend and analysed the responses.

‘The results indicated a statistically significant difference between genders, confirming that women’s gossip is encoded with more positivity than that of men.’