The Food and Drug Administration has warned consumers not to buy Rhino male enhancement products after a rise in reported health issues.

The products, said to contain hidden drug ingredients, can cause medical problems including chest pain, severe headaches and extreme drops in blood pressure.

Sold at convenience stores and gas stations, the products offer customers ‘stamina, size and time’ in the form of capsules which are claimed to work for up to seven days.

They are also traded on eBay and Amazon and unapproved products have been found in international mail shipments to the U.S., according to the FDA.

Packaging for the Krazzy Rhino 25000 says the product will ‘maximize sexual confidence’ and offer ‘guaranteed enhancement’.

The instructions say users should ‘take one Krazzy Rhino capsule one hour before sex to help energy, libido and sexual performance’.

However the FDA says the products contain undeclared ingredients which have ‘significant safety issues’.

Some of them are said to contain the same active ingredients as Viagra and prescription drugs used to treat erectile dysfunction.

‘They may interact with nitrates found in some prescription drugs and may lower blood pressure to dangerous levels,’ the agency said.

Last month a South Korean national was arrested in California on suspicion of illegally importing and selling erectile dysfunction drugs, including Rhino capsules.

FDA executive Donald D. Ashley said: ‘Over the past few years, the FDA has been combatting the retail sale of male enhancement drug products that are frequently misrepresented as dietary supplements and that contain hidden and potentially harmful active drug ingredients. 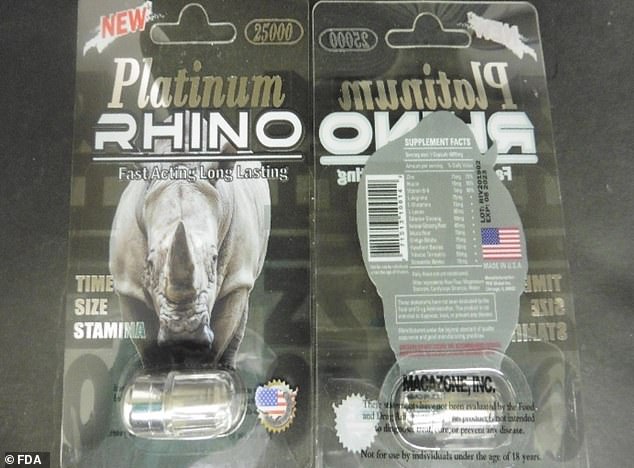 The Platinum Rhino 25000 is another of the products in the range, said to be sold at gas stations, convenience stores and traded on eBay and Amazon

‘We remain vigilant in our efforts to protect the American public from the sale of these potentially dangerous products.’

The agency said that many so-called dietary supplements or sexual enhancement products had been found to contain active drug ingredients.

‘Consumers should also be on alert for products that offer immediate or quick results and that sound too good to be true,’ the FDA said in a statement.

The FDA keeps a ‘tainted products database’ which includes Rhino products, but said it was not able to test and identify every suspect product.