A senior police officer at the Metropolitan Police has said victims of crime who don’t speak English could be prioritised more during call outs.

Craig Mackey, deputy commissioner for the force, said the Met could decide who receives a face to face visit from the police depending how ‘vulnerable’ they are.

He added the method was an ‘absolutely feasible’ way to help the force cope following cuts to funding.

Craig Mackey, deputy commissioner for the force, said the Met could decide who receives a face to face visit from the police depending how ‘vulnerable’ they are

Speaking to the Evening Standard, he said: ‘It’s absolutely feasible as we go forward that if my neighbour is a vulnerable elderly person who has experienced a particular type of crime, that she gets a face-to-face service that I don’t get. So we triage things… we assess people’s vulnerability.

‘Vulnerability can manifest itself in a number of ways: people with learning difficulties, a whole range of things, some people for whom English isn’t a first language.

‘That’s about how we get those resources focused on the things you can make a difference with. But also as we go forward, as demand grows, you have to have a way of controlling and triaging.’

He added that the Met was also looking at selling off certain police stations, safer neighbourhood bases, offices and other sites as a way to cut costs, and that ‘nothing would change’ with people ringing the 999 service.

In July, the London Mayor Sadiq Khan announced half of London’s ‘poorly used’ police station front counters will close to save £10million a year.

Currently, there are 73 working counters, down from 136 four years ago. 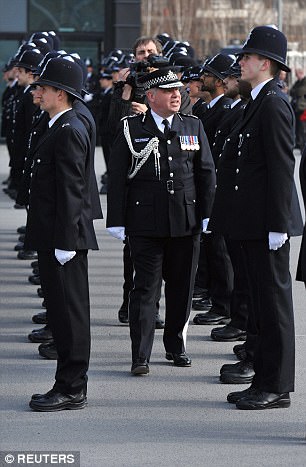 At the time, Mr Khan said: ‘The huge government cuts to the Metropolitan Police Service have left us with no choice but to take drastic action to protect the frontline of policing.

‘My top priority is keeping Londoners safe, and every pound saved by closing a front counter is a pound of savings that we do not have to find by reducing the frontline.’

The MailOnline has contacted the Home Office and the Mayor’s office.

A Met spokesman said: ‘MPS is transforming to be more efficient and effective and we have already saved £700 million. By taking tough decisions, we have been able to invest in more firearms officers, more officers investigating rape and other sexual offences, and the biggest cybercrime team in any UK force.

‘We continue to reduce the costs of supporting frontline policing, notably by a significant reduction in the number of buildings we own. We are equipping officers with mobile devices so they can spend more time on the streets and less time at a desk.

‘The Met is reducing the number of buildings it owns, and shutting under-utilised front counters in police stations, as this is the best way to maximise the resources we need to deal with violent crime. 77% of our budget goes on our people, so we can’t find all our savings without touching front-line policing.

‘Given the rise in violent crime – acid attacks, knife crime, moped-enabled crime, terrorist incidents – we must make sure that our resources are directed at the prevention and reduction of violent within all of our communities.

‘We are committed to providing the best service for Londoners to use, which allows us to deliver an effective and appropriate response. This means maximising the value the public gets from our resources, including officers, staff and our estate. However let us be clear, safeguarding the most vulnerable people in society, while tackling and disrupting crime and bringing offenders to justice will always remain our priority.

‘Total Policing is the Met’s commitment to be on the streets and in your communities to catch offenders, prevent crime and support victims. We are here for London, working with you to make our capital safer.’