Venezuela can’t say they weren’t warned. Just one minute before Jesus ‘Tecatito’ Corona jinked and jived his way past three defenders before firing Mexico level, he showed just what he was capable of.

The Porto winger soared past Alexander Gonzalez, made a fool of Luis Manuel Seijas and then fired a powerful effort inches wide of the far post.

The next time he got the ball, there was a different ending. Dragging Jose Manuel Velazquez and Wilker Angel this way and that, he worked himself a path into the area and lashed the ball past the seemingly unbeatable Dani Hernandez. 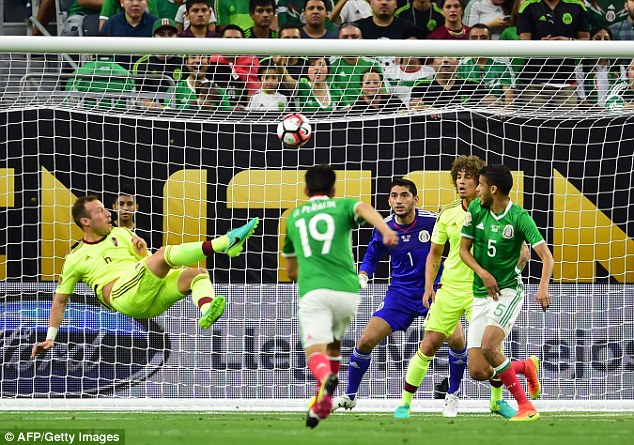 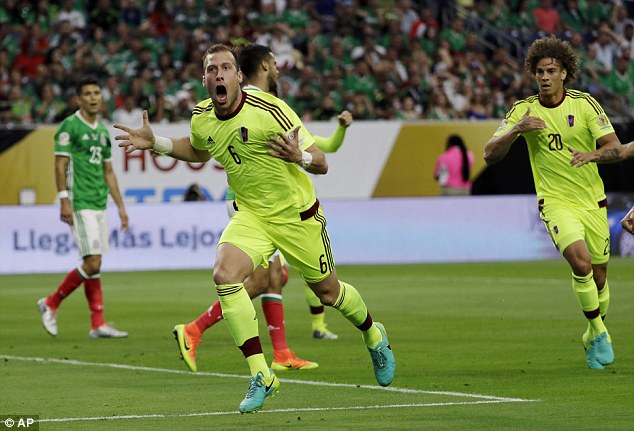 Tecatito beat three men and drew others to the scene, like moths flapping around a match, and the Venezuela back-line ended up burned.

It was a goal that earned Mexico the top spot in Copa America Centenario Group C, setting them up for a tie against Chile or Panama in the quarter-finals, and forced Venezuela into the path of an oncoming train – Argentina.

For 80 minutes it seemed like surprise package Venezuela were going to pull off another shock result. Even though star man Salomon Rondon was not playing, rested for the quarter-finals with both of these teams already guaranteed passage, the Vinotinto continued their string of fine performances at this tournament in his stead. 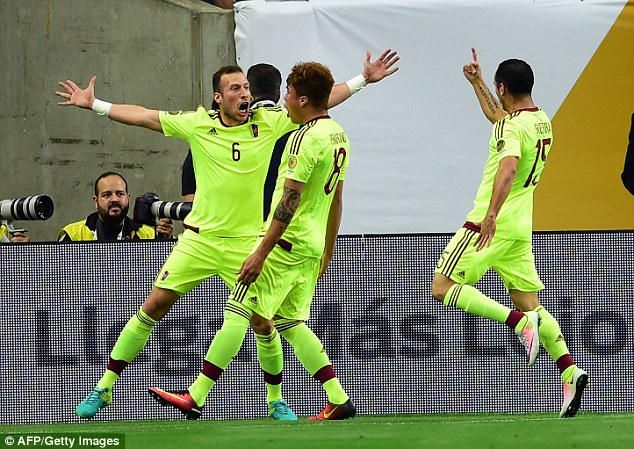 They took just 10 minutes to take the lead, with defender Velazquez volleying home spectacularly after Christian Santos nodded the ball on from a free-kick.

It was a splendid strike, three-quarter scissor-kick one-quarter hook, which bulleted past Jose Corona and slammed into the back of his net. The only shame was Mexico’s supporters, throwing drinks and other objects at the players as they celebrated.

El Tri dominated possession afterwards but Venezuela’s defenders weren’t giving the forwards much space in the area, which perhaps Javier Hernandez would have been able to find if he had been playing. 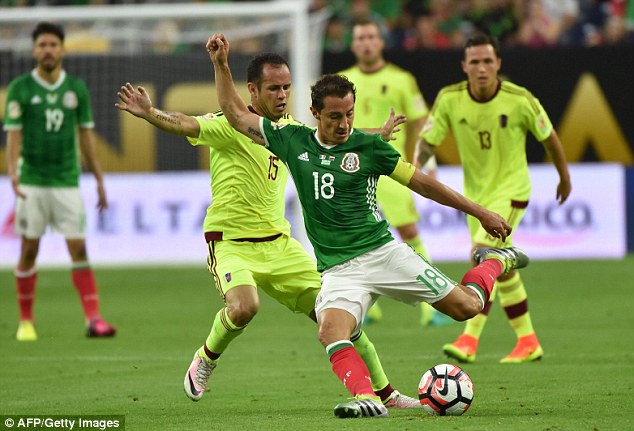 Mexico’s Andres Guardado, right, and Alejandro Guerra do battle for the ball during Monday’s match 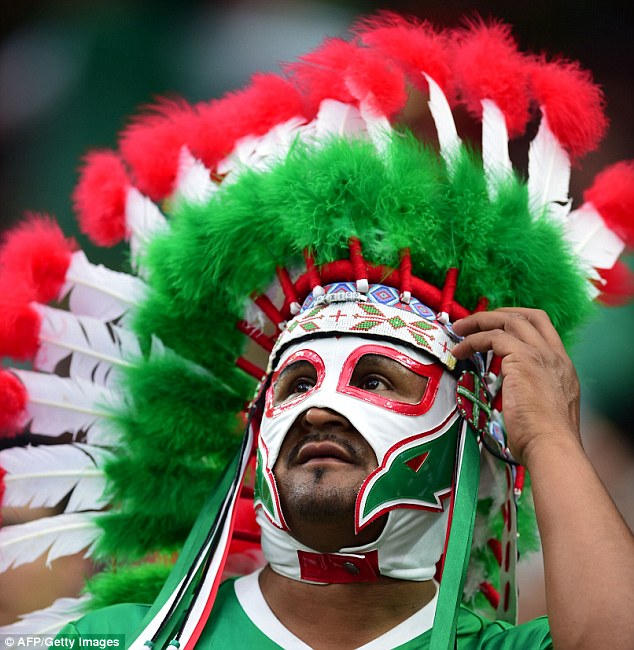 Juan Carlos Osorio picked a handful of reserve players to rest his first-teamers for the quarter-final later this week, making nine changes from the 2-0 win over Jamaica.

Mexico should have had a penalty five minutes before half-time, when Wilker Angel clearly handled Hector Moreno’s header.

Referee Yadel Martinez did not award the spot-kick, to Mexican fury, and Venezuela survived unscathed until the interval.

Early in the second half Miguel Layun sent a stinging strike at Venezuela’s goal, but Dani Hernandez made a solid stop.

The same theme of Mexico possession continued after the break, but Yonathan Del Valle went on a spectacular slalom run from his own half, which ended up in Mexico’s penalty area, before he was eventually tackled.

The next best chance fell to Venezuela too, with substitute Josef Martinez played in on goal, but his effort was weak and Corona made a good save, low to his left. 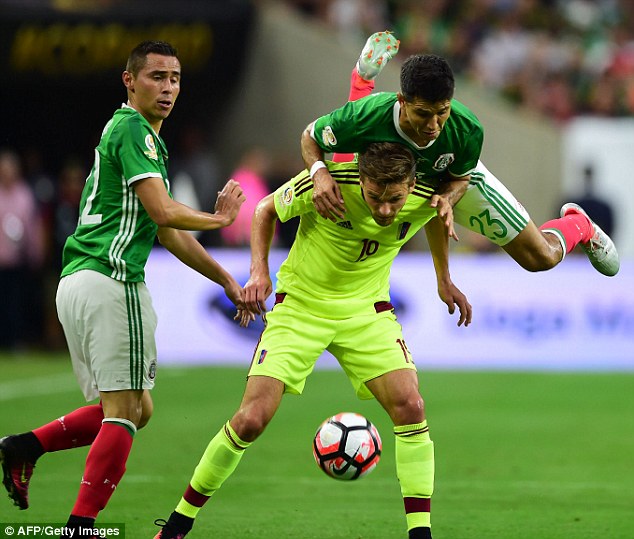 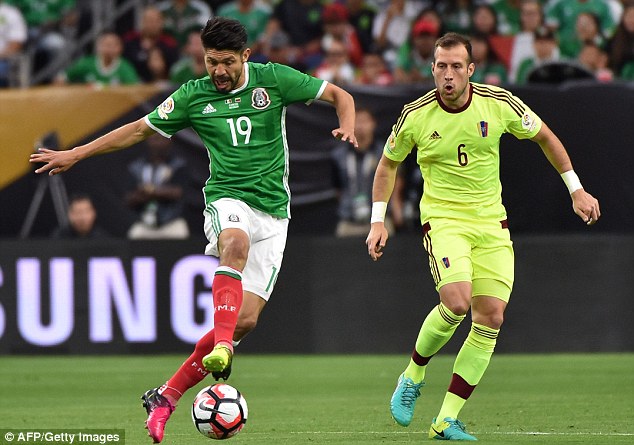 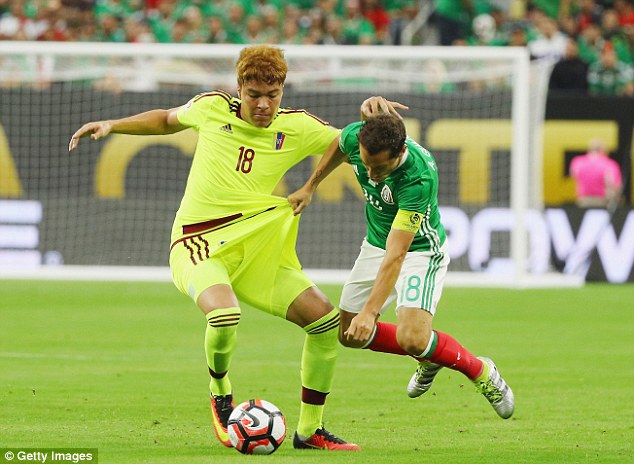 It should have been his team’s second goal and Tecatito made him pay the price, but not before Hernandez made some exceptional saves to frustrate the tens of thousands of Mexican fans in attendance at the NRG Stadium in Houston, Texas.

The best was a double stop, first blocking Diego Reyes’s header from close range and then reacting superbly to parry the follow up from Moreno too.

Eventually he was beaten, though, thanks to Mexico’s moment of magic, when Tecatito turned into Messi. Hernandez will now have to face the real Messi in the next round, with Venezuela now facing Argentina in the quarter-finals.