Former First Lady Michelle Obama has pulled a prank on unsuspecting tourists in New York, teaming up with Jimmy Fallon to surprise them on an elevator.

Obama appeared on NBC’s Tonight Show Starring Jimmy Fallon on Tuesday night, where she pulled the elevator prank before sitting down for a revealing, wide-ranging interview.

The stunt, which Fallon has pulled once before with Paul McCartney, involved the late night host and former first lady waiting on a random floor of NBC’s headquarters in 30 Rockefeller Plaza as an elevator with a tour group stopped and opened its doors.

In one gag, the pair were sitting and reading each other’s books, dropping them down to reveal their faces to the screams of the tour group. 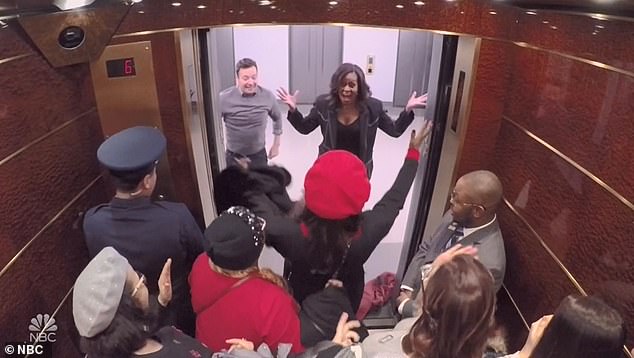 When he dropped the blanket, they were shocked to see Michelle Obama before them 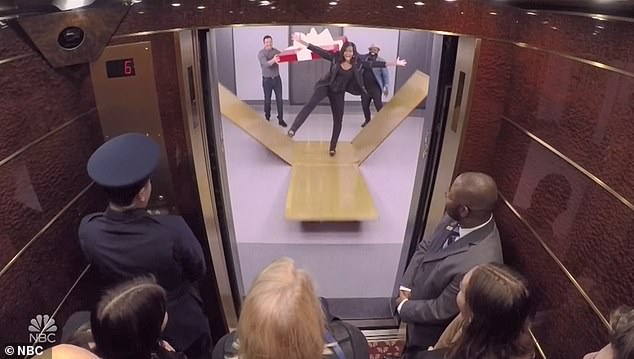 In another, scene, Fallon opened a giant Christmas present to reveal Michelle Obama

In another, Fallon opened a giant Christmas box to reveal Obama waiting inside, delighting the tourists.

Later in the show, Obama sat down with Fallon for an interview to promote her new book, Becoming.

Early in the interview, Obama revealed the poor impression that her future husband made the first time they met, when he was working for her at a law firm in Chicago.

‘He wasn’t good with time until we got married,’ she said. ‘He was late. The first time. First day of work, his first job, dude was late. I was like, triflin’, brother.’ 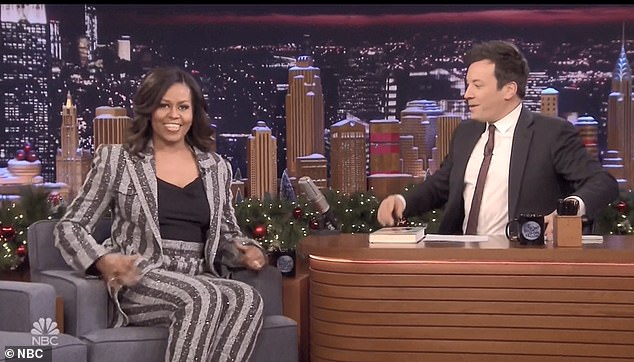 Later in the show, Michelle Obama gave a wide-ranging interview to Fallon 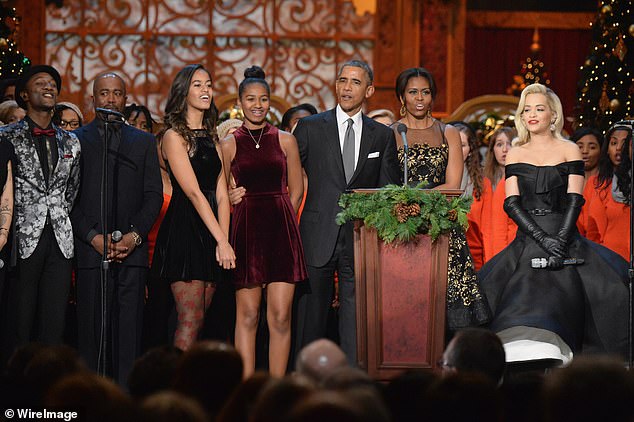 She said her husband only sought a second term to get Secret Service protection for their teen daughters. Barack Obama is seen with daughters Malia and Sasha above in 2014

Obama also explained her husband’s motivation for seeking a second term in the presidency.

‘The second term of the presidency was really fueled by Barack’s desire to keep them with their agents into their teen years,’ she joked. ‘He was like, we’ve got to win, because I don’t want those girls walking around. He wanted men with guns with them.’

In one memorable moment in the interview, Obama said that her thoughts upon leaving the White House for the last time were ‘Bye, Felicia’.

‘A lot was going on that day,’ added Obama, explaining that her daughters had insisted on a final sleepover with friends on the last day of her husband’s presidency.

‘And then there was the Tiffany’s box,’ she said, referring to the gift that Melania Trump gave her, causing momentary awkwardness as she wasn’t sure what to do with it. ‘It was a lot.’

Asked by Fallon whether she remained optimistic about the country, she responded: ‘I am.’

‘We owe young people that optimism, that hope, because what’s the alternative?’ … They come into this world with so much promise and openness; we’re the ones that shut them down.

‘They need to know their story can be my story,’ Obama continued. ‘If you live like I did – a little working-class kid who made her way up to becoming First Lady of the United States, a best-selling author, traveling the world – there is reason for hope,’ she said.

‘There are dark days in so many of our journeys, but we have to push that arc toward hope. That is what I try to do every day.’

Obama explained that writing a memoir is part of the First Lady ‘assignment’.

‘It’s a great story!’ Fallon gushed. ‘You came from basically nothing, and became the First Lady of the United States!’

Obama said that she could have written an entirely other book focused on her time in the White House, but that it would have been 800 pages, and taken her husband 800 days to read.