Millionaire Keith Crawford, 74, was jailed Thursday for two years and six months after being found guilty of gross negligence manslaughter

A former UKIP parliamentary candidate has been jailed for causing the death of a handyman by ignoring safety pleas – telling him: ‘F**k that, it’s getting stupid money now.’

The millionaire Keith Crawford, 74, tried to cut costs while having a leak outside his pool repaired in January 2015.

Builder Peter Clements, 48, died when the trench he was excavating at Crawford’s home in Exeter, Devon, collapsed on top of him.

Crawford, who has a rental property portfolio worth £7million but does not consider himself wealthy, had refused to pay £480 for health and safety precautions – telling Mr Clements: ‘Just carry on with what you are doing’.

Mr Clements was covered in tonnes of earth in front of his own son, and despite being pulled out by co-workers he later died at hospital.

After his death, Crawford visited Mr Clements’ widow Amanda – and handed her £1,000.

Crawford was jailed on Thursday at Bristol Crown Court for two years and six months after being found guilty of gross negligence manslaughter.

The judge also ordered Crawford to pay £15,000 to cover the costs of the two prosecution authorities, and told to pay the fee within six months.

The property tycoon was found guilty earlier in March for failing to comply with health and safety regulations after a trial at Exeter Crown Court and was given a concurrent sentence of 12 months. 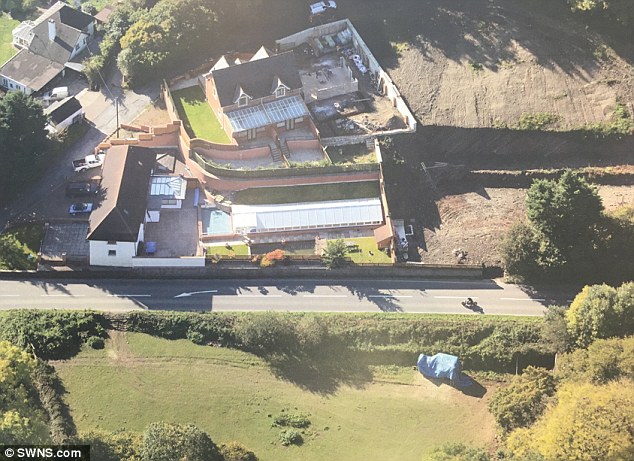 The former UKIP parliamentary candidate tried to cut costs while having a leak outside his pool repaired in January 2015, resulting in a worker’s death. The court was shown aerial photos of Crawford’s luxurious home (above) during the trial

Mr Justice James Dingemans told Crawford at Bristol Crown Court: ‘This case is a tragedy for all.

‘There is no sentence I can pass that can possibly reflect the loss suffered by Amanda Clements and her family.

‘A particularly sad feature of this case is that Ryan Clements saw his father buried.

‘I am sure there was plain and obvious risk of death from the collapse of the side of the trench.’

Representing Crawford, Mr Richard Smith said the incident was ‘wholly inconsistent’ with Crawford’s character, both in business and personal life. Peter Clements, 48, was buried alive when the trench he was excavating at Crawford’s home collapsed on top of him and covered him in tonnes of earth

Mr Smith had provided several character references on behalf of his client which spoke of his kind and generous nature.

‘There is a theme, perhaps within his outward appearance, in the way he speaks and perhaps appears to be an uncaring man,’ he said.

‘That is little more than a front and behind it is a man described as caring, hardworking and who assists others in their personal lives.

‘What he did was completely out of character. Perhaps it was petulant, perhaps ill-thought. Now he will have to live with it for the rest of his life.’

Mr Smith said Crawford would find a prison sentence ‘more difficult’ than a younger man because of his age.

‘The punishment for him at his age and at his position in life and having regard to his health, both mentally and physically, will make the sentence more difficult and so the sentence can be tempered for that reason,’ he added.

Mr Smith continued: ‘This wasn’t a persistent course of offending. There was no evidence that he had failed himself in the past in that way.

‘The way he operated in his business life was not to take such a risk. He has no background of being a risk-taker.

‘This is out of character with the way he would normally do his work, which is usually of a high standard.

‘There is no suggestion that he has conducted himself in business life in any way that would be consistent with this one error of judgement.’

Crawford, a property tycoon with a fortune of £7m, was convicted after a trial earlier this month at Exeter Crown Court.

The court heard he ignored safety warnings and refused to pay for measures which would have prevented the tragedy. 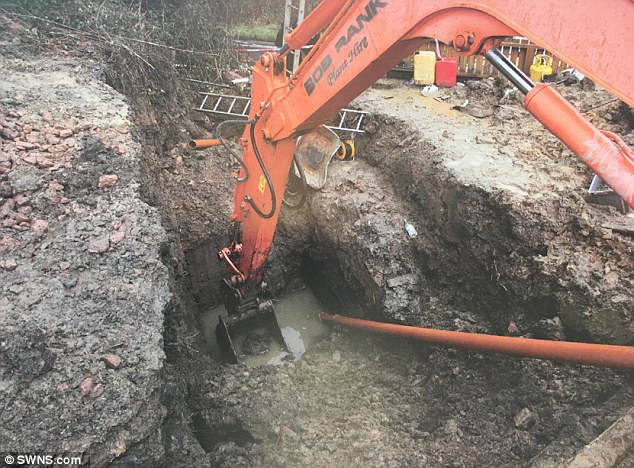 Mr Clements was brought in to dig a soakaway for the leaking outdoor swimming pool, but allegedly raised concerns about the safety of the trench (above)

Shortly before he died Crawford is said to have told Mr Clements: ‘F**k that, it’s getting stupid money now – just carry on with what you are doing.’

The defendant, a former soldier, tried to argue he could not be held responsible because Mr Clements was a sub-contractor who was not directly employed by him.

Mr Clements died of a cardiac arrest in hospital some days after suffering a collapsed lung and broken ribs in the accident.

Mr Clements, who had done several jobs in the past for Crawford, was brought in by the owner to dig a soakaway for his leaking outdoor swimming pool in Exeter, Devon.

The court heard in the days leading up to the incident Mr Clements, who was working with his son Ryan and a digger driver called Ross Phillips, had raised concerns about the safety of the trench, which was 3ft wide and 9ft deep at its deepest point.

The prosecution said Crawford said paying money for a trench box represented ‘stupid money’ and the defendant was accused of turning a blind eye to the situation.

‘The reason Crawford gave to Mr Phillips why a trench box was not appropriate was that it was too expensive,’ said prosecutor Stephen Mooney.

‘Mr Philips’ perception was that this work needed to be done quickly and cheaply but not safely.

‘He was completely ambivalent to the use of safety measures and so he walked away.’ 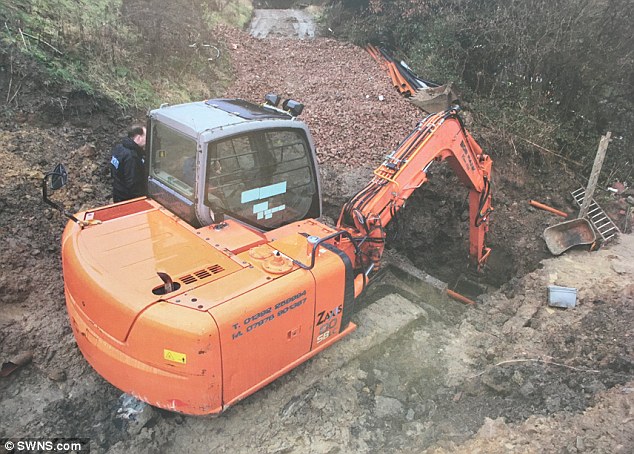 The handyman died of a cardiac arrest in hospital after suffering a collapsed lung and broken ribs after the accident in January 2015 (above: the trench where he was crushed by soil)

As the trench started to collapse Mr Clements’ son Ryan managed to scramble half way up a ladder but his father was not able to get out before he was buried.

His two co-workers tried desperately to release him and eventually managed to pull him free using the digger and chains under his arms.

He had suffered a collapsed lung and broken ribs. After he died Crawford visited Mr Clements’ widow Amanda and handed her £1,000.

During the trial Crawford told the jury he felt ‘no responsibility whatsoever’ for the death.

He admitted paying workmen cash-in-hand to do jobs. He disliked ‘red tape’ and liked to negotiate work costs ‘man-to-man’.

Crawford told the court he owned about 60 properties in the Exeter area and collected about £360,000 gross in rent every year, but denied being wealthy.

‘I’m not short of a bob or two but I’m not wealthy. I’d like to be wealthier,’ he said.

Crawford has stood in several council elections on behalf of UKIP and in 2010 and 2015 was chosen to contest the Exeter parliamentary seat held by Ben Bradshaw.

During his unsuccessful political career he claimed to have joined the army at 15, serving for 24 years.