‘Miss me?’: Billie Eilish is back to brunette hair less than a year after going platinum blonde

Billie Eilish nearly broke the internet earlier this year when she debuted a head of platinum blonde hair.

But the 19-year-old Grammy Award-winner shocked fans once more by revealing she’d returned to her brunette roots on Thursday.

‘Miss me?’ captioned Eilish, who famously rocked dark brown tresses during her career-making When We All Fall Asleep Where Do We Go era. 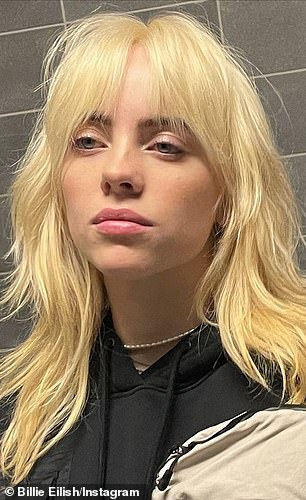 Back to her roots: Billie Eilish shocked fans by returning to her brunette roots on Thursday less than a year after making her dramatic platinum blonde hair transformation

Billie was only a root-to-tip brunette for a brief period in 2019 before giving her look some edge with slime green roots. Taking things up a notch, she’d dye her remaining brunette sections black.

Though it’s unclear exactly when Billie decided to revert back to her tried and true dark brown ‘do, she was last seen on Instagram with blonde hair on November 19.

For Thursday’s big unveiling, Billie captured herself in selfie mode outdoors with pavement as her backdrop.

Her hair was worn down and styled straight with her bangs slightly tousled.

The Lovely hitmaker, further paying homage to her older stint with brunette hair, wore the ‘Drug Free’ tee that she famously sported before her tour kickoff in Miami, Florida on March 9, 2020. 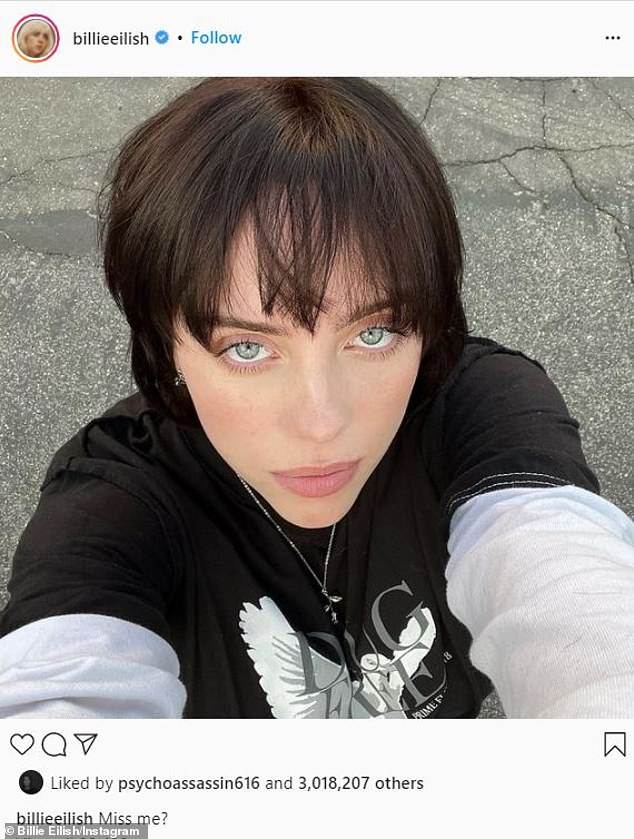 Nostalgic: ‘Miss me?’ captioned Eilish, who famously rocked dark brown tresses during her career-making When We All Fall Asleep Where Do We Go era

Unbeknownst to Billie, she’d be forced to cancel her sold-out Where Do We Go world tour just days later due to the coronavirus pandemic and its subsequent lockdown.

Since then, the young star has returned to performing – lending her star power to philanthropic festivals and socially-distanced award shows – and even released her highly anticipated follow-up album Happier Than Ever in July of this year.

The Happier Than Ever era unofficially commenced when Eilish revealed to her devout fanbase in March that she’d traded in her beloved slime-green roots for blonde.

She did so by sharing a fresh out of the salon selfie to her Instagram with the caption, ‘Pinch me.’ Along with her new color, Billie had her stylist cut a fringe. 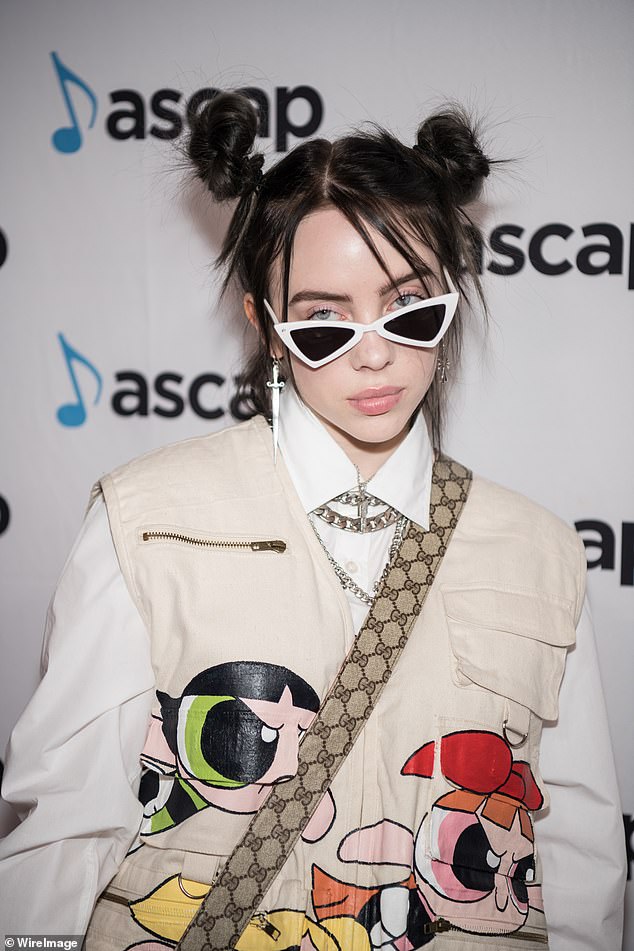 Throwback: Billie was only a root-to-tip brunette for a brief period in 2019 before giving her look some edge with slime green roots that same year; Billie seen in 2019 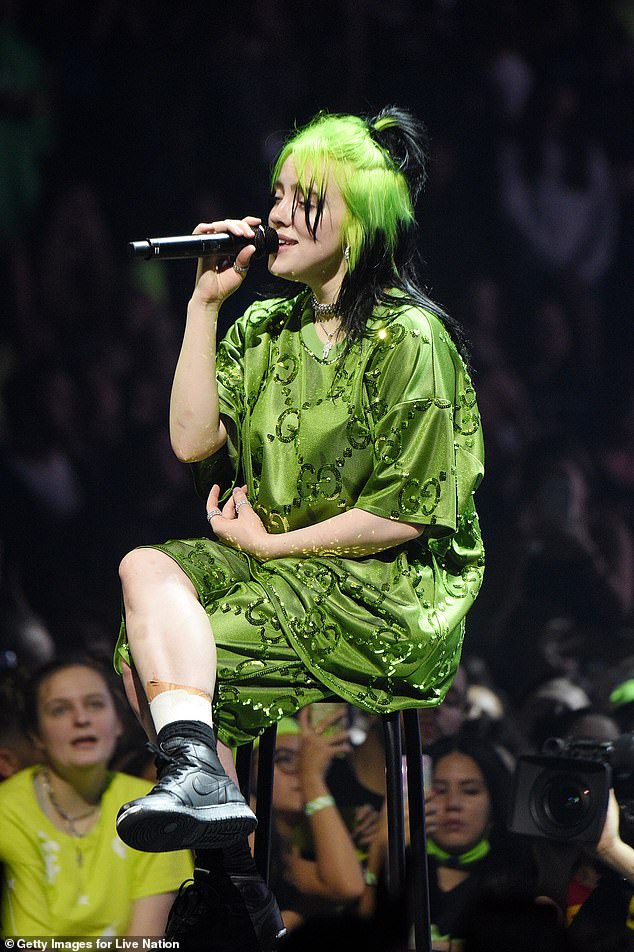 Taking it up a notch: Billie took her wild look up a notch, by dying her remaining brunette sections black; Billie pictured in 2020

Being that it ‘took six weeks to accomplish’ the platinum look, Eilish admitted to talk show host Stephen Colbert that she’d been wearing an ‘awful’ wig to hide the often unsightly path to blonde.

‘I didn’t want to look insane, but I needed something quick,’ she explained. ‘So I literally ordered a Billie Eilish Halloween costume wig on Halloween.

‘It was awful, it was the ugliest thing I’ve ever seen. It was literally a fully black wig.’

She reassured her fans at the time that she wasn’t trying to pull a ‘Hannah Montana’ type stunt and that it was simply an easy way for her hair to not  ‘look f***ing crazy.’

Months later, Billie told Ellen DeGeneres that she’d ‘been wanting it blonde for a while’ but that she didn’t know exactly what motivated her to make such a drastic change. 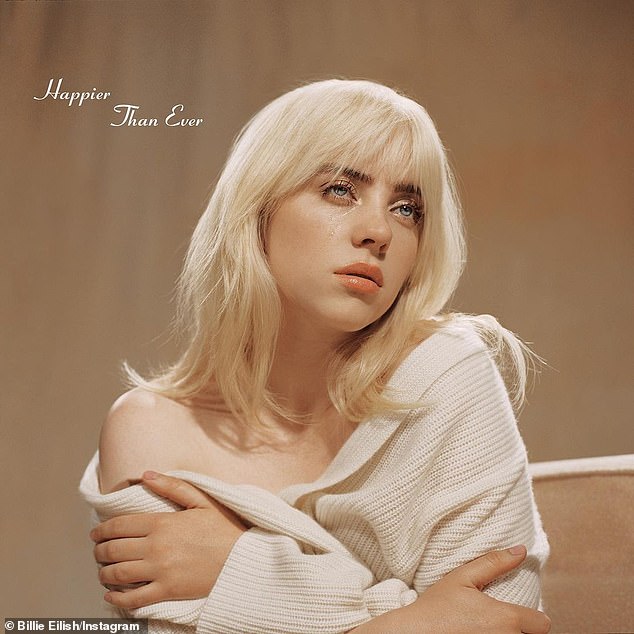 New era: Billie’s Happier Than Ever era unofficially commenced when she revealed to her devout fanbase in March that she’d traded in her beloved slime-green roots for blonde

It wouldn’t be until September that she’d reveal to Elle that she did it to achieve some ‘anonymity’ after reaching superstardom at such a young age and becoming one of music’s most recognizable figures.

Referencing to her black/green hairdo, Billie stressed that she just ‘couldn’t go anywhere with that hair’ without drawing attention to herself.

She then recalled her first public outing as a blonde, which proved to be a liberating experience.

‘I was terrified of the paparazzi and these stalkers I’ve had. But my friend was like, “Don’t worry: You’re okay. Nothing’s gonna happen.” And I took my hood off, and I felt like a new person.’ 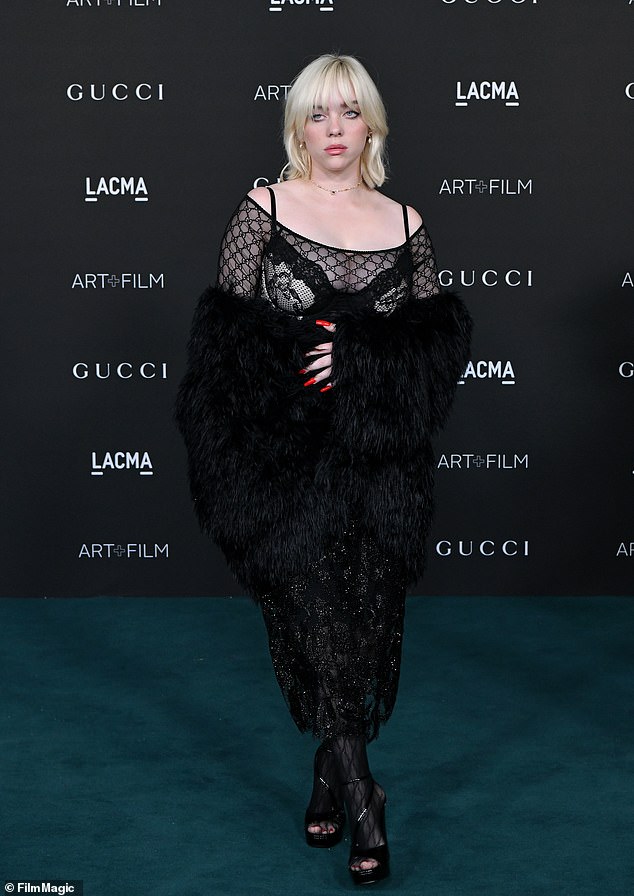 Anonymity: In September, Billie revealed the true motivations behind the blonde, telling Elle that she did it to achieve some ‘anonymity’ after becoming one of he most recognizable stars in the world; Billie pictured in November